California’s $3.5bn battle with Trump: Governor REFUSES to hand back funds for canceled high-speed rail project after President brands it a ‘disaster’ and tells him ‘we want that money back’

By Tim Stickings For Dailymail.com and Reuters

California’s Governor has refused to return $3.5billion in federal funding for a struggling high-speed rail project after Donald Trump told him: ‘We want that money back’.

Gavin Newsom hit back at the President after abandoning a $77billion plan for a high-speed rail line between Los Angeles and San Francisco.

Trump called the project a ‘disaster’ and demanded the money back but Newsom said it was ‘California’s money’, taking a dig at the President by suggesting he was desperate for border wall funding.

California had hoped to build a 520-mile line where trains could travel at 220mph but the project, which was years behind and billions over budget, has now been scaled down to a 119-mile link from Merced to Bakersfield.

California Governor Gavin Newsom (pictured during his State of the State address in Sacramento) has refused to pay back $3.5billion in high-speed rail funding from Washington 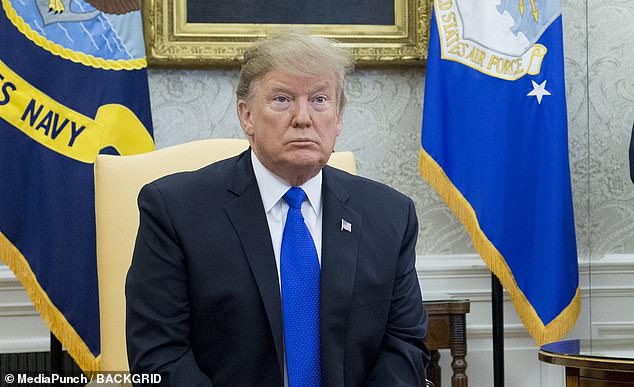 President Donald Trump, pictured in the Oval Office yesterday, called the project a ‘disaster’ and demanded California return the money granted by the Obama administration in 2010

Trump took aim at the Democratic Governor on Twitter, saying: ‘California has been forced to cancel the massive bullet train project after having spent and wasted many billions of dollars.

‘They owe the Federal Government three and a half billion dollars. We want that money back now. Whole project is a “green” disaster!’

‘This is CA’s money, allocated by Congress for this project. We’re not giving it back. The train is leaving the station – better get on board!

The Obama administration awarded the state a total of $3.5 billion in 2010 as part of its stimulus package. 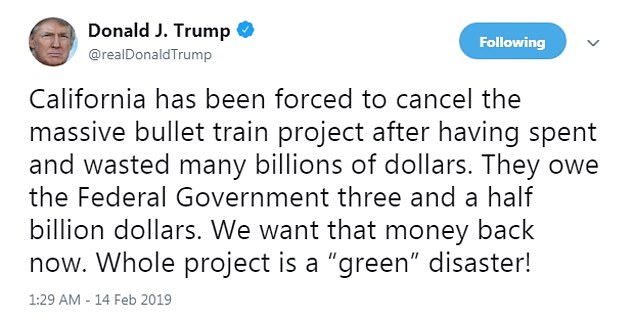 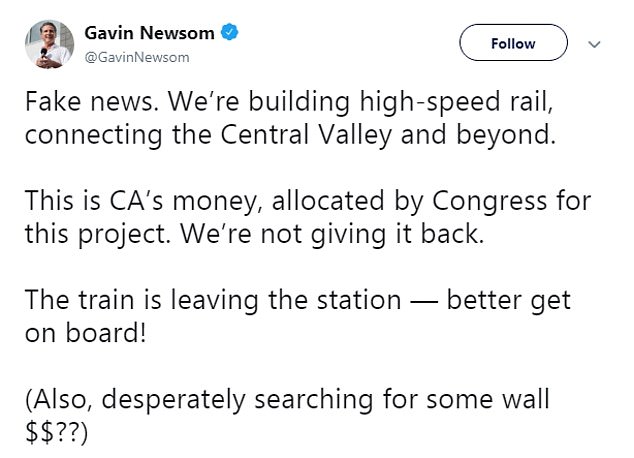 Twitter feud: President Trump demanded the money back from Gavin Newsom but the California Governor said he would use it for a scaled-down project 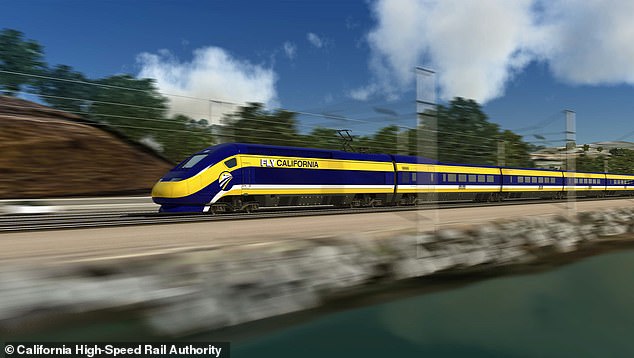 Concept art shows the planned high-speed train that was to have run from San Francisco to Los Angeles. The project had ballooned in cost to $77billion and was running years behind

The line had been planned to open by 2033 but last year the state forecast the costs had jumped by $13billion to $77billion, and warned that they could rise to as much as $98.1 billion.

High-speed rail had been one of the planks of the ‘Green New Deal’ spearheaded by Alexandria Ocasio-Cortez and fellow Democrats.

Announcing the end of the project during his State of the State address, Newsom said: ‘Let’s be real.

‘The current project, as planned, would cost too much and respectfully take too long.

‘There’s been too little oversight and not enough transparency. Right now, there simply isn’t a path to get from Sacramento to San Diego, let alone from San Francisco to Los Angeles. I wish there were. 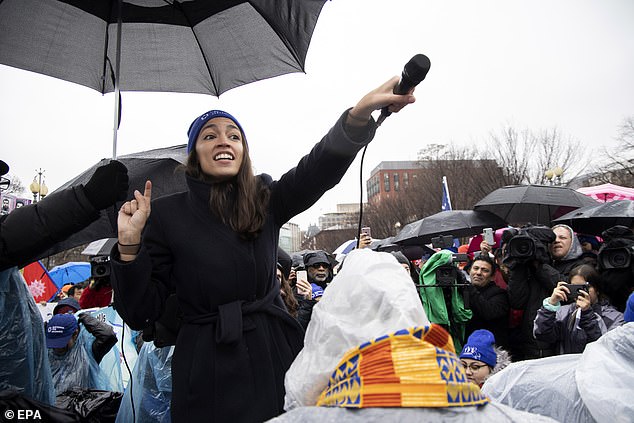 Freshman Congresswoman Alexandria Ocasio-Cortez, a New York Democrat, believes that a massive network of high-speed rail could eliminate the need for air travel

‘Abandoning high-speed rail entirely means we will have wasted billions and billions of dollars with nothing but broken promises, partially filled commitments and lawsuits to show for it.

‘And by the way, I am not interested in sending $3.5 billion in federal funding that was allocated to this project back to Donald Trump.’

Trump has frequently clashed with California, which voted overwhelmingly against him in the 2016 election.

In January he blamed poor forest management for raging fires in the state, threatening to cut off federal funding.

Newsom blasted Trump in his inaugural address last month, saying he would ‘offer an alternative to the corruption and incompetence in the White House.’