California governor Gavin Newsom, 52, is being sued by three churches that want to stay open during the coronavirus outbreak.

A suit was filed in the federal court for the Central District of California on Monday, the LA Times reported.

California is currently under a strict one-month stay-at-home order in a bid to slow the coronavirus spread, with all non-essential businesses are closed and public gatherings banned.

Gavin Newsom gives a daily coronavirus update at the the Governor’s Office of Emergency Services in Rancho Cordova, California, pictured here on April 9. Newsom said he was already making detailed plans on how to re-open the state while still stressing the need for people to say at home and stay away from others

Places of worship have not been listed among the infrastructure where face-to-face contact is permitted.

The suit names three churches in San Bernardino and Riverside counties. They argue they can practice safe social distancing in the same way grocery stores and other places that are considered essential services are allowed to remain open.

The suit claims religious services are ‘essential for the spiritual health of the congregation so that the congregants can exhort one another during these difficult times’, according to TMZ. 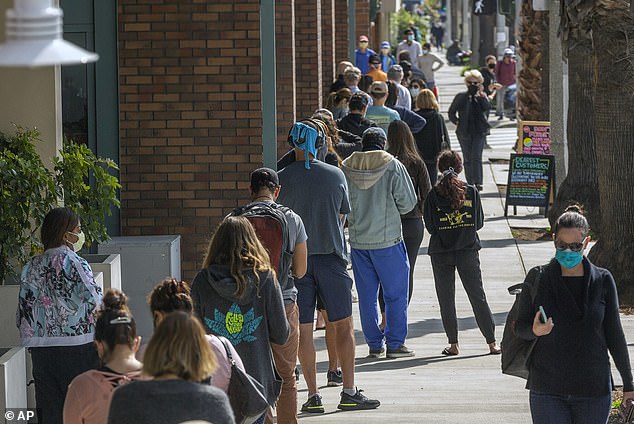 One of the plaintiffs, James Moffatt, is a senior pastor at Church Unlimited in Indio.

The suit claims he was fined $1,000 for holding a Palm Sunday service and violating Riverside County’s order.

The suit said Moffatt ‘believes that scripture commands him as a pastor to lay hands on people and pray for them, this includes the sick.’

It added that Moffatt believes he is ‘required by scripture to baptize individuals, something that cannot be done at an online service’. 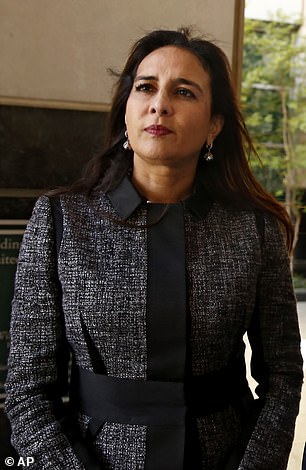 The suit also names a parishioner and the head pastor of Shield of Faith Family Church in Fontana, as well as the senior pastor of Word of Life Ministries International in Riverside which usually has 20 to 30 attendees.

Harmeet K. Dhillon, chief executive of the Center for American Liberty, a California nonprofit organization that filed the suit said: ‘The state does not get to dictate the method of worship to the faithful.

‘If a Californian is able to go to Costco or the local marijuana shop or liquor store and buy goods in a responsible, socially distanced manner, then he or she must be allowed to practice their faith using the same precautions.’

John C. Eastman, a professor of law and community service at Chapman University in Orange, said he believed the suit had merit.

In an email he said: ‘Services with only a single family in a pew, and spaced three pews apart, with everyone wearing masks and gloves, would accomplish the government’s purpose in a much less draconian way.’

Many churches in California now stream services online, and on Easter Sunday several held drive-in services for people to listen from their car radios. 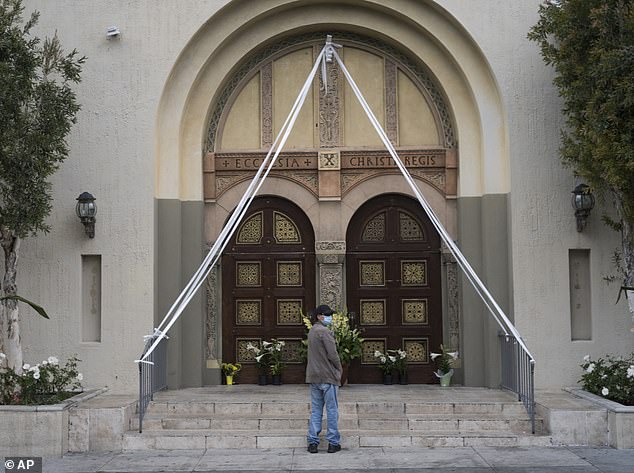 A parishioner prays outside the closed doors decorated with Easter lily flowers at the Christ the King Church Roman Catholic Church in Los Angeles on Easter Sunday. Many Californians celebrated Easter from their homes and even in their cars as residents endured the fourth straight weekend under statewide orders to stay indoors to slow the coronavirus spread

But on Friday a federal judge refused to allow a small church in Campo, Abiding Place Ministries, to gather for Easter Sunday services.

The judge rejected a request for a temporary restraining order sought by the church, which has sued San Diego County for banning public and private gatherings on public health grounds.

U.S. District Judge Cynthia A. Bashant, citing a U.S. Supreme Court ruling, said the right to freedom of religion doesn’t ‘include the right to expose the community … to communicable disease.’ 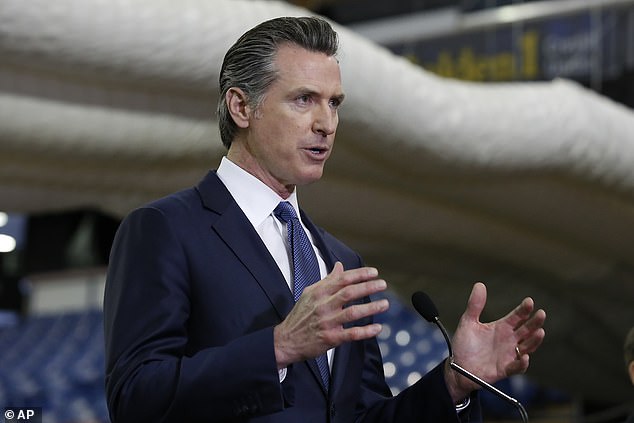 Gov. Gavin Newsom discusses the acquisition of the Sleep Train Arena for use as a field hospital in Sacramento, California. He announced on April 7 that the state will spend nearly $1 billion to purchase up to 200 million masks per month to boost the state’s stockpile of protective equipment during the COVID-19 outbreak, and provide as a supplier to other western states

The latest figures show more then 22,000 cases of coronavirus in California, with close to 700 deaths.

He had previously said the state expects to see a peak in Covid-19 infections in May.