Boris Johnson has faced calls for clarity on wearing face masks after saying a ‘stricter’ approach is needed in England.

The government is considering following Scotland’s lead by making them mandatory in shops, as experts say indoor environments are ‘much more dangerous’ for airborne transmission.

The Prime Minister is facing mountain calls from Labour and leading scientists to provide the public with clarity on where face masks should be worn.

Labour’s Shadow health secretary Jonathan Ashworth tweeted that ‘strong and clear guidance’ was needed, after Mr Johnson was spotted wearing a face mask when visiting businesses in his Uxbridge constituency on Friday. 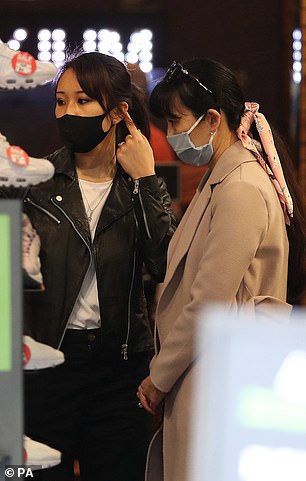 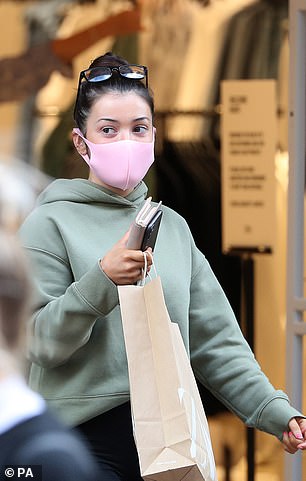 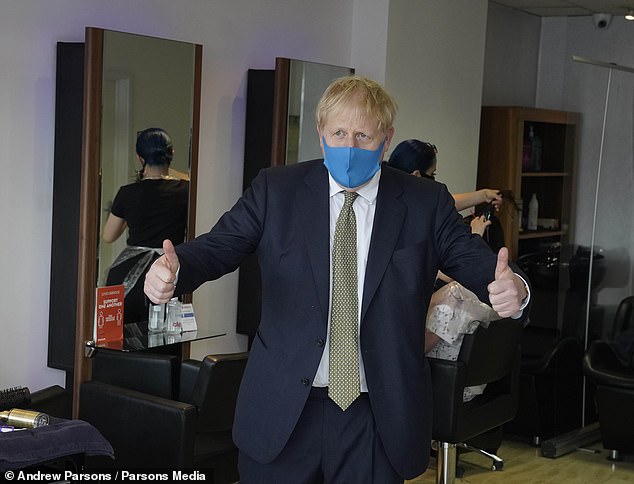 Although Nicola Sturgeon made face coverings compulsory in shops since Friday, there are currently no such rules in the UK.

This morning Trish Greenhalgh, professor of primary care at Oxford University, told BBC Radio 4’s Today Programme: ‘There is a huge body of evidence supporting the use of face coverings in crowded places by the lay public to prevent transmission of the covid-19 virus.’

She said that:  ‘When I go into a shop I am certainly wearing a face covering, without any doubt. 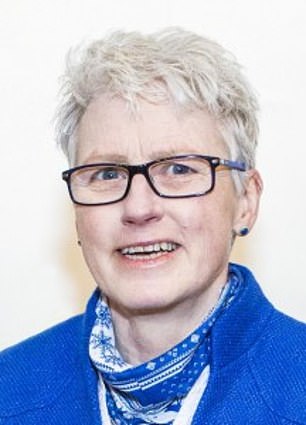 Trish Greenhalgh, professor of primary care at Oxford University, told BBC Radio 4’s Today Programme: ‘There is a huge body of evidence supporting the use of face coverings in crowded places by the lay public to prevent transmission of the covid-19 virus.’

‘The reason for that is that indoor environments are much much more dangerous in terms of what we call airborne transmission.

‘If someone coughs or speaks loudly and the virus then gets into the air and it stays in that shop, in that enclosed space, so indoor environments are much more dangerous.’

When asked if evidence shows masks protect wearers, as well as those nearby, Professor Greenhalgh said that was an ‘incorrect’ piece of information released in government guidance.

‘Wearing the face covering does protect the wearer a little bit but it doesn’t protect you very much.

‘But it’s not nearly as much as it protects other people from the droplets coming out of the person’s mouth.’

Greenhalgh added that research on wearing masks in offices space needs to be ‘urgently accelerated’ but that it depended on the ‘ventilation’.

In the early days of the outbreak the UK government argued that scientific evidence that the masks reduced transmission of the airborne virus was ‘weak’.

But rules requiring people to wear face masks on public transport in England came into effect on 15 June.

On Friday Mr Johnson said ‘the balance of scientific opinion seems to have shifted more in favour of them than it was, and we’re very keen to follow that’.

‘I do think we need to be stricter in insisting people wear face coverings in confined spaces where they are meeting people they don’t normally meet.

‘We are looking at ways of making sure that people really do have face coverings in shops, for instance, where there is a risk of transmission’, he said during a Facebook Q&A.

The UK government currently recommends measures such as a face covering should be taken if people cannot keep two metres away from each other indoors. 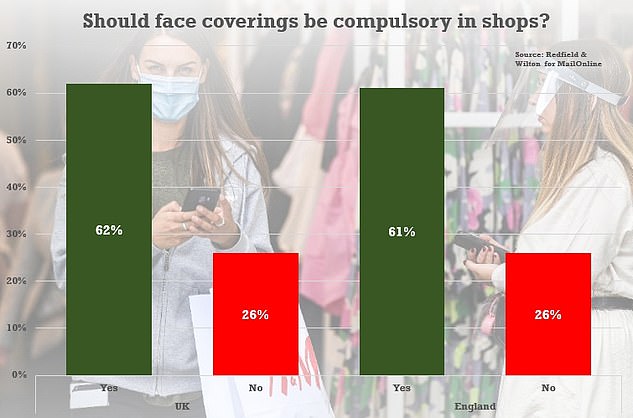 A poll by Redfield & Wilton Strategies for MailOnline found 61 per cent of the public in England would like to see coverings enforced in shops and supermarkets – with just 26 per cent opposed. The support is reflected across the wider UK

A recent poll for MailOnline has found 61 per cent of the public want to follow the example north of the border on the issue.

Mr Ashworth said it was ‘welcome’ news that ministers were looking at face mask evidence.

He said Labour was urging ministers to ‘conclude this review rapidly to provide the strong and clear guidance neede’.

Shadow exchequer secretary Wes Streeting said it was ‘not helpful’ for the prime minister to do a photo shoot wearing a face mask until there was more clarity over when they should be worn, the BBC reported. 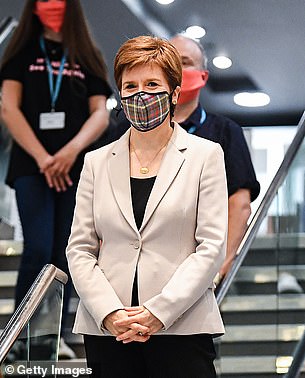 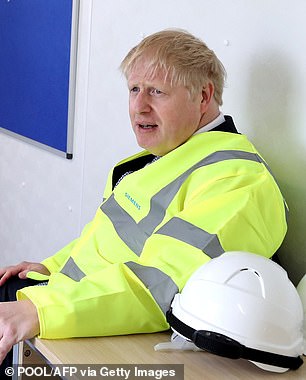 ‘At the moment people are hearing different messages from different quarters,’ the Labour MP told BBC Radio 4’s Any Questions.

Former cabinet minister and Tory MP Andrea Leadsom also told the programme she did not want masks to be mandatory but ‘people should be considerate of others’ and start to think about carrying one wherever they go.

In a round of interviews, culture minister Caroline Dinenage said she wears a mask ‘all the time’.

She was asked to answer why more senior figures had not been pictured wearing face coverings but said they would have to answer themselves.

Asked whether the government had considered introducing a similar rule to Scotland in England, Ms Dinenage told the BBC: ‘Yes of course, and they are mandatory on public transport.’

April 21: Revealed in meeting minutes a month later, Sage advised: ‘On balance, there is enough evidence to support recommendation of community use of cloth face masks, for short periods in enclosed spaces, where social distancing is not possible.’

May 20: Researchers in Hong Kong found face masks reduced infection by up to 75 per cent.

June 4: Transport Secretary Grant Shapps announced that face coverings will be mandatory on public transport from June 15. He said: ‘With more people using transport the evidence suggests wearing face coverings offers some – albeit limited – protection against the spread for the virus.’

June 5: Health Secretary Matt Hancock revealed plans to make face coverings compulsory in hospitals for all staff, visitors and outpatients from June 15, but a furious NHS boss said the decision was made ‘without any notice or consultation’. Meanwhile, Grant Shapps said masks would not be required in other settings such as shops because people spend little time in close proximity.

June 12: German study suggests making face masks compulsory could slow the spread of Covid-19 by as much as 40 per cent.

July 10: A government source said it was a ‘fair assumption’ that masks would become mandatory in shops and other indoor settings within a few weeks.