JustGiving is being urged to give back more than £300,000 it earned from Colonel Tom Moore’s fundraising walk for the NHS.

The crowdfunding website applied a five per cent fee on gift donations towards the £39million the war veteran raised for healthcare workers fighting coronavirus on the frontline.

The generous public donated £32.8million and with Gift Aid, the total was increased to £39million.

However, JustGiving, which is owned by US firm Blackbaud, has pocketed £308,683 in fees.

So far, £42million has been raised on the website for NHS Charities Together, an organisation that is collecting money to help healthcare workers on the frontline.

The £385,000 JustGiving has made from the fundraising is enough to pay 17 nurses.

The crowdfunding website took one per cent from Gift Aid donations made to the veteran’s fundraiser – amounting to a staggering £308,683

He told the Sun: ‘On the 75th anniversary of VE Day, JustGiving would earn the nation’s respect by just giving the money back to the heroes and heroines of our NHS.

‘The massive support for Tom shows how dear to people’s hearts this campaign is.’ Colonel Tom raised millions of pounds by walking 100 laps of his Bedfordshire Garden before his 100th birthday.

Labour MP Neil Coyle said: ‘Whilst the country’s in crisis and the great British public dig deep to help our frontline NHS it is sickening to know JustGiving have been helping themselves to Gift Aid donations.

‘They trousered public contributions after terror attacks and need to be stopped from profiteering during the pandemic.’ None of the other major charity fundraising pages in Britain charge mandatory fees on Gift Aid.

The systems for processing donations is ‘straightforward and cheap’, an expert told The Sun. However, the company still charges on Gift Aid.

‘They must understand that, on this occasion, the right thing for them to do is to waive their fee,’ Mr Jones added. 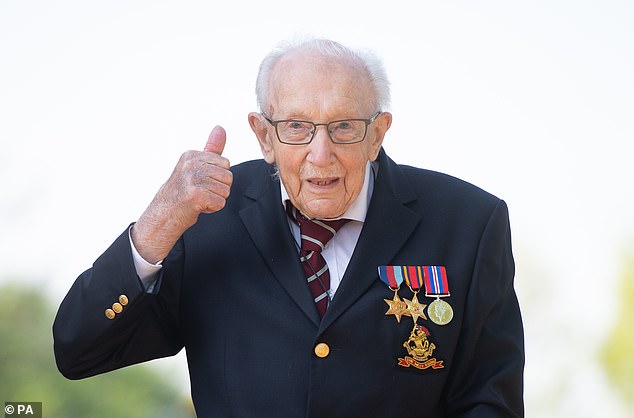 The centenarian raised some £32.8million on his JustGiving page last month after walking 100 laps of his garden in Bedfordshire in honour of NHS frontline staff

Colonel Moore’s fundraising campaign to walk 100 laps of his garden by his 100th birthday was launched on April 9 with an initial target of £1,000, and soon hit that within the first 24 hours.

JustGiving said it kept money, ‘to pay for operating costs’.

Singer Michael Ball and Colonel Tom also reached number one in the charts with a cover of You’ll Never Walk Alone.

All profits from the single went towards Captain Tom’s 100th Birthday Walk Fund. In terms of pure download sales, the single to date has sold just over 95,000 copies in the UK, according to Official Charts Company data.

This comes after Virgin agreed to waive the controversial admin fees on its fundraising site following claims that it was benefiting from money donated to NHS charities.

The firm last month faced criticism for taking a cut of nearly £133,00 – after almost £30million was donated to health service causes through Virgin Money Giving since the Covid-19 crisis began 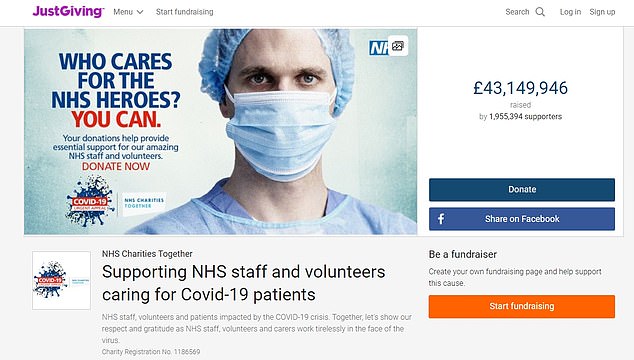 A total of £42million has been raised on JustGiving for NHS Charities Together, with the site now taking some £385,000

Amid rising social media protests about the fees, chief executive David Duffy vowed to scrap them for the duration of the lockdown and to donate part of his reported £5 million-a-year earnings to cover the cost of running the site.

He made that pledge on April 9, but the fees were still being charged six days later and only ceased when The Mail on Sunday contacted the company.

Mr Duffy noted that ‘many charities [are] seeing a large drop in their fundraising contributions during lockdown,’ adding: ‘In this extraordinary and challenging time we wanted to do more to support the generosity of the public.’ The company is part-owned by Sir Richard Branson, whose wealth is estimated at more than $4 billion.

The firm’s decision to drop its fee will renew scrutiny of the levies charged by donation websites.

Virgin Money Giving said they implemented Mr Duffy’s pledge to waive the fees ‘as soon as this was technically possible’.