A decision by Belgium to repatriate its child citizens from Syrian refugee camps has prompted fresh calls for Australia to bring home more than 40 children and their mothers.

The European nation made the decision this week to take custody of some women and children of alleged Islamic State fighters, joining a list of other countries that have already done so, including France, Russia and Finland.

Thousands of women and children related to alleged extremists have been held in refugee camps in the Kurdish-controlled part of Syria for about two years.

There are more than 40 Australian children, mostly aged six and under, with their mothers in a camp called Roj in the country’s northeast.

Humanitarian organisation Save the Children is one of the few with regular access to the camp via its nutrition, education and infant care programs.

‘You should get them home while you know you still can, while you know the Kurdish authorities are still in charge, while they’re still facilitating repatriations,’ Save the Children’s Syria Response director Sonia Khush told AAP.

Foreign governments are concerned about women’s ongoing sympathies or links to Islamic State, and while these worries are not unfounded, Ms Khush said, it is important to understand the diversity in the populations living in the camps.

‘Tarring them all with the same brush is really condemning them to being trapped in those camps for possibly years to come,’ she said.

‘Our request is always to take them home and then put them through a judicial process.’

Ms Khush said the Australian women held in Roj had agreed to court orders and expect a judicial process if they are taken home.

She has been into Roj camp personally and has seen that children are missing basic healthcare and getting sick with preventable illnesses.

There is no dental care and debilitating tooth pain among women and children is common.

Save the Children runs informal education for children to give them routine, but it is no substitute for school. 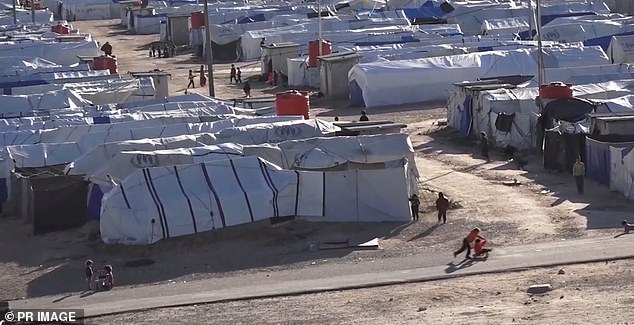 There are more than 40 Australian children, mostly aged six and under, with their mothers in a camp called Roj, in Syria’s northeast (the camp is pictured)

It is bitterly cold and snows during winter. Women have limited freedom to walk around within the heavily guarded camp, Ms Khush said.

‘The mental toll that this takes on the women and children only gets more and more severe as time goes on,’ she said.

Among the Australian children is a two-year-old who was born in the camp who knows no different, she said.

Ms Khush encouraged the Australian government to make every effort not to tear families apart, but allow mothers to come back with their children.

‘Efforts must continue to bring innocent children to safety and help them recover and build a new life,’ she said.

Australia last allowed a small number of repatriations in 2019.