Some Premier League teams have resumed training today for the first time since the coronavirus halted all footballing activities in England on March 13.

The return to training is the top-flight league’s first stage of ‘project restart’ to resume Premier League matches safely.

Players from a number of England’s top football clubs, including Liverpool, Chelsea, Arsenal, Tottenham Hotspur and Southampton, have been pictured returning to their respective training grounds today.

Once there, they took pay part in small-group training exercises that followed social distancing measures, in place to reduce the risk of spreading the coronavirus among players and staff.

One player of note to return to training was Chelsea’s Callum Hudson-Odio, who on Sunday was arrested under suspicion of rape.

Meanwhile, Watford’s captain Troy Deeney has told his club that he won’t return to training out of concern for his son’s health and the well-being of BAME players.

Callum Hudson-Odoi (pictured running ahead of teammates) took part in Chelsea’s reduced training activities today, undertaking activities in small groups in order to observe social distancing measures. On Sunday, Hudson-Odoi was arrested under suspicion of raping a woman at his flat in Battersea, London 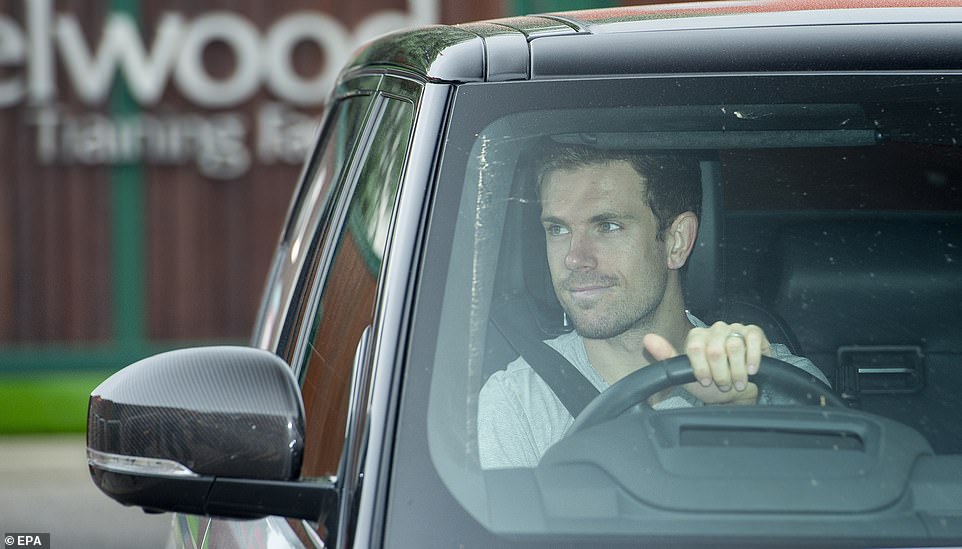 Liverpool captain Jordan Henderson, pictured leaving his team’s Melwood training facility, will be hoping the Premier League can restart safely, as his team are on course to secure their first title in 30 years

A total of 748 players and staff from 19 Premier League teams have reportedly been tested, with six positive tests across three anonymous clubs.

The players or staff who have tested positive will now self isolate for seven days, and the results from the remaining club will be released in the coming days.

On Monday, team and league officials met via a video conference to discuss the return to training, and agreed to resume activities, limited to small groups, from Tuesday.

The training will also be non-contact to ensure that players are maintaining a safe distance from one another, and have been told that they must keep two meters apart during training sessions and while at the training facilities.

Health inspectors will asses clubs to make sure that measures are being followed in the training sessions. 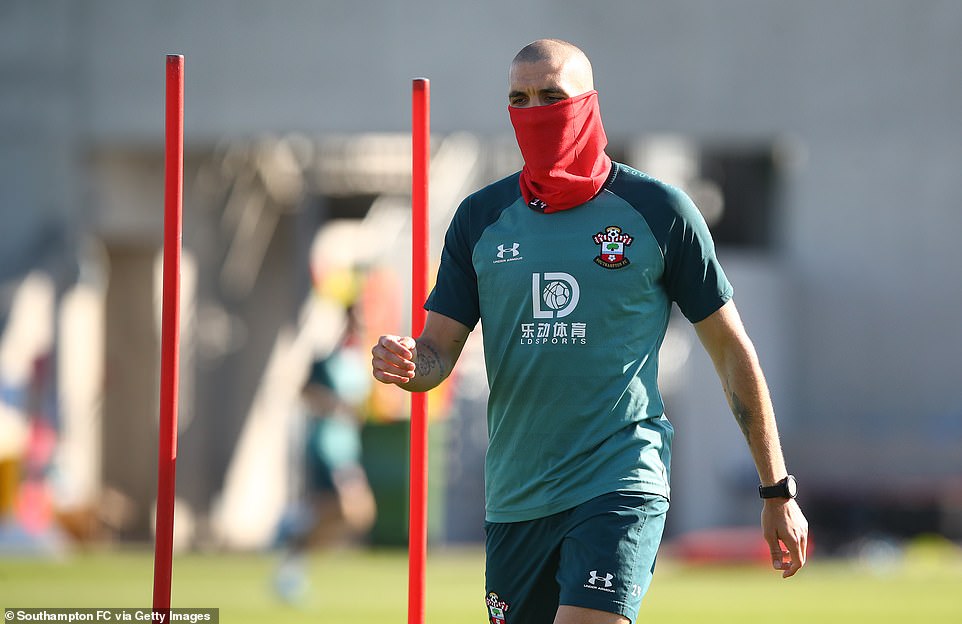 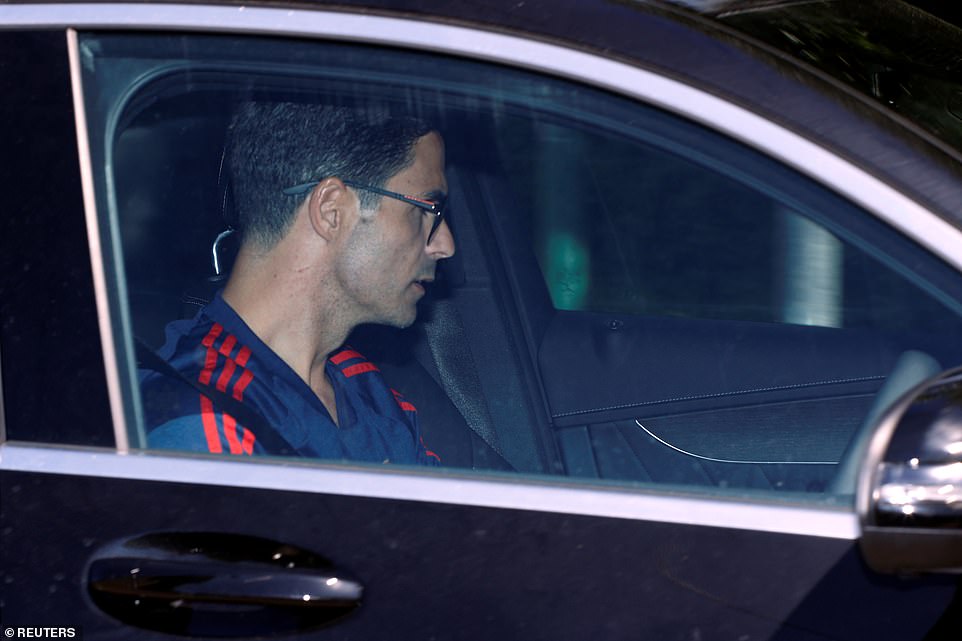 Arsenal’s manager Mikel Arteta arrives for training at the club’s London Colney facility in Hertfordshire. Arteta was one of the first high-profile cases of the coronavirus among figures involved in the Premier Leauge 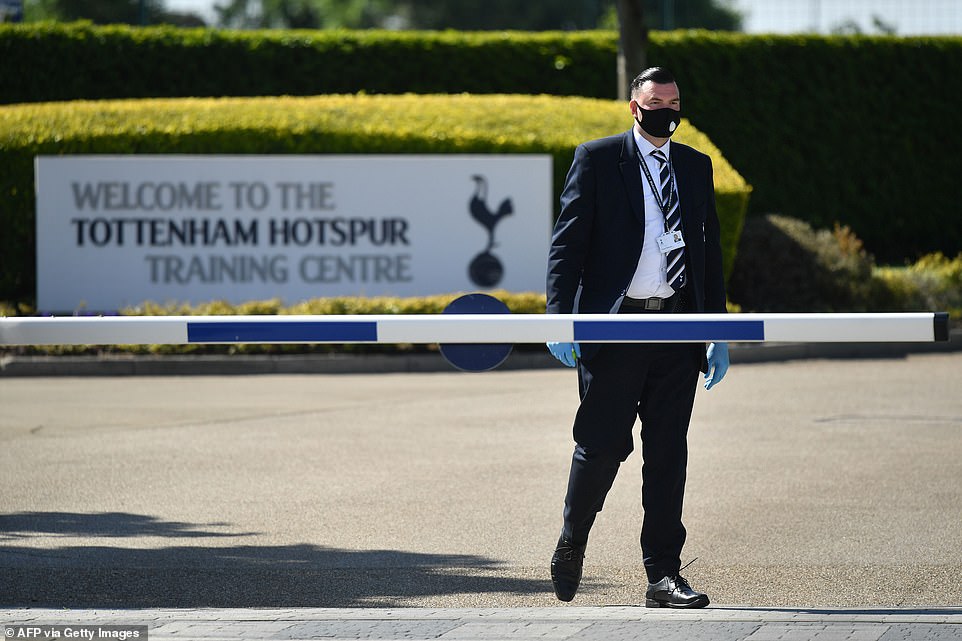 The second protocol – the next step in the process of restarting Premier League football – will be to allow for the resumption of contact training, which will reportedly be put to the clubs in meetings next week.

The measures are being taken with the aim to resume the 2019-2020 Premier League season, that has been left incomplete due to the coronavirus, by June. This step would be the third protocol.

However, while football itself may resume in the coming months under ‘project restart’, the Premier League has said fans may not be able to return to stadiums for a year. 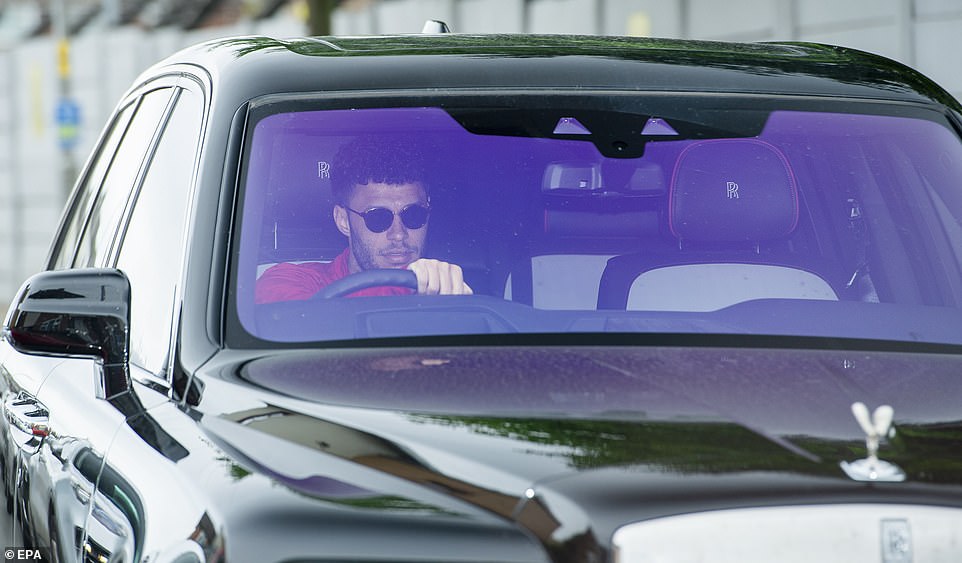 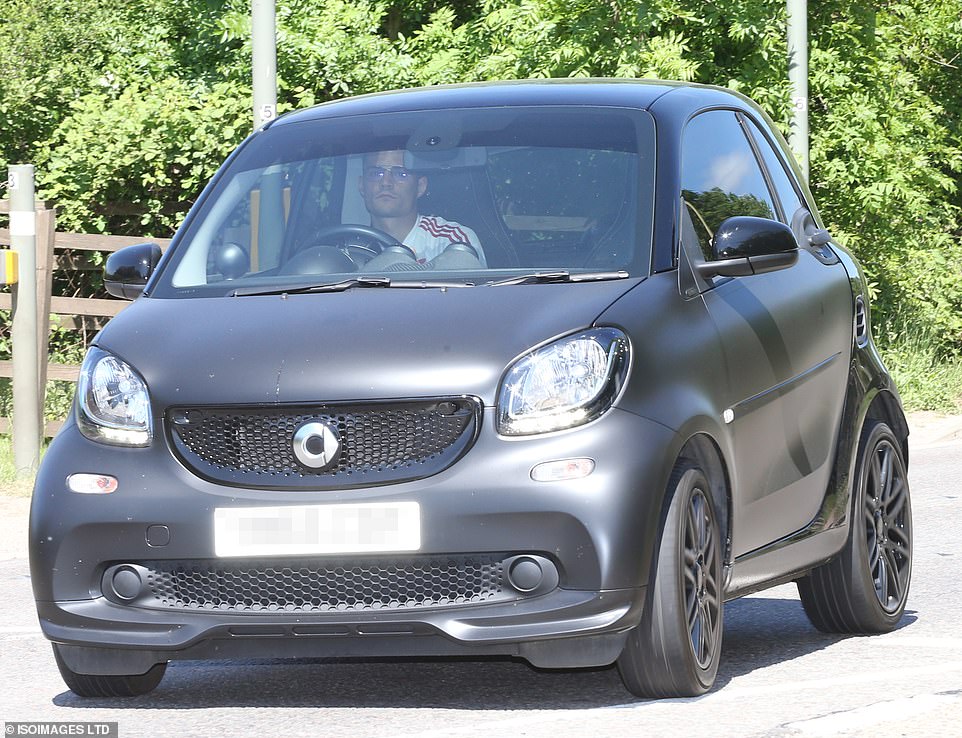 Players, including those from Liverpool, Chelsea, Arsenal, Tottenham Hotspur and Southampton have been photographed returning to their club’s training grounds. Manchester United and other clubs will reportedly also resume limited training activities this week.

Pictures taken of Chelsea’s training ground have shown players working in small groups while keeping a distance of two meters apart. Meanwhile, aerial footage from Sky News has shown how Tottenham Hotspur players are training together while maintaining a safe distance.

Elsewhere, Germany’s Bundesliga was the first of Europe’s top-flight leagues to resume over the weekend, with all matches being played behind closed doors.

Other countries have also seen football teams return to training, including Italy and Spain, with similar measures in place to ensure players remain at a safe distance. 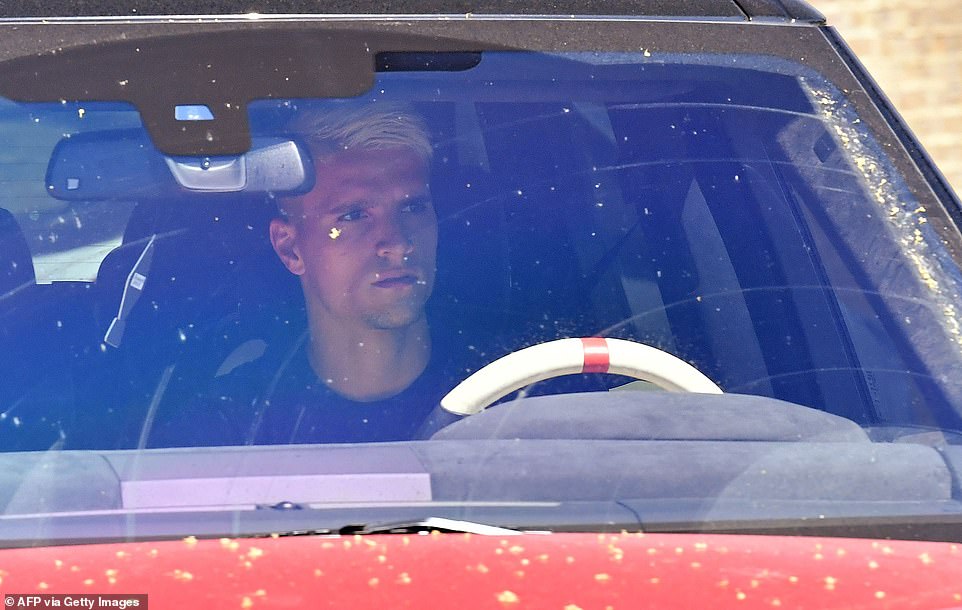 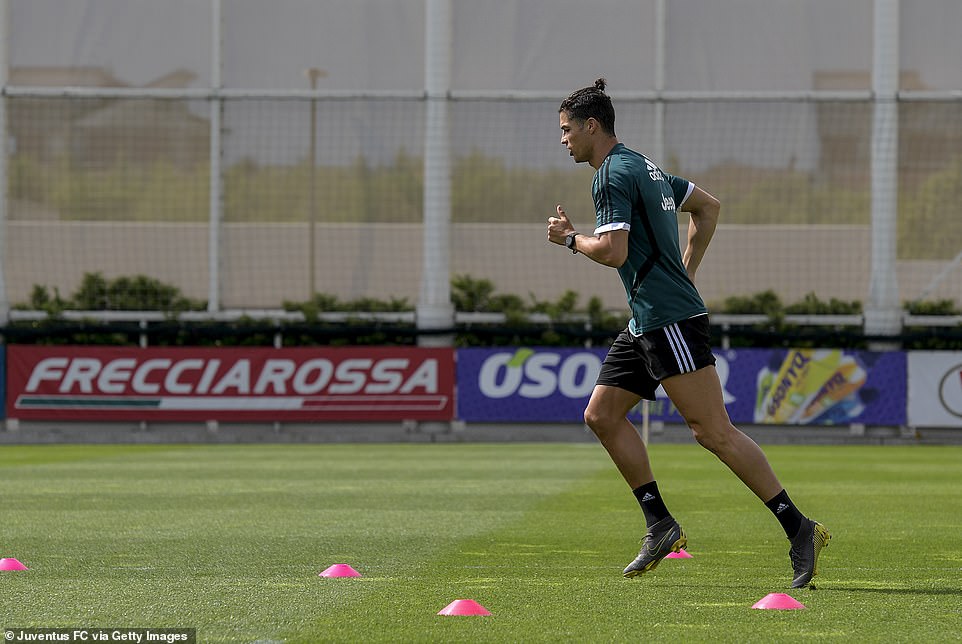 Chelsea and England footballer Hudson-Odoi was photographed today for the first time since his arrest on suspicion of raping a model.

The 19-year-old Premier League star was seen arriving for training at Chelsea’s Chobham base, two days after he was arrested in the early hours of Sunday morning.

At around 4 a.m. on Sunday, police officers took the Hudson-Odoi into custody after receiving a call from a woman who said that she was raped at his penthouse suite in Battersea, South London. He was then released on bail.

The player retreated to the family home near Wimbledon on Monday. 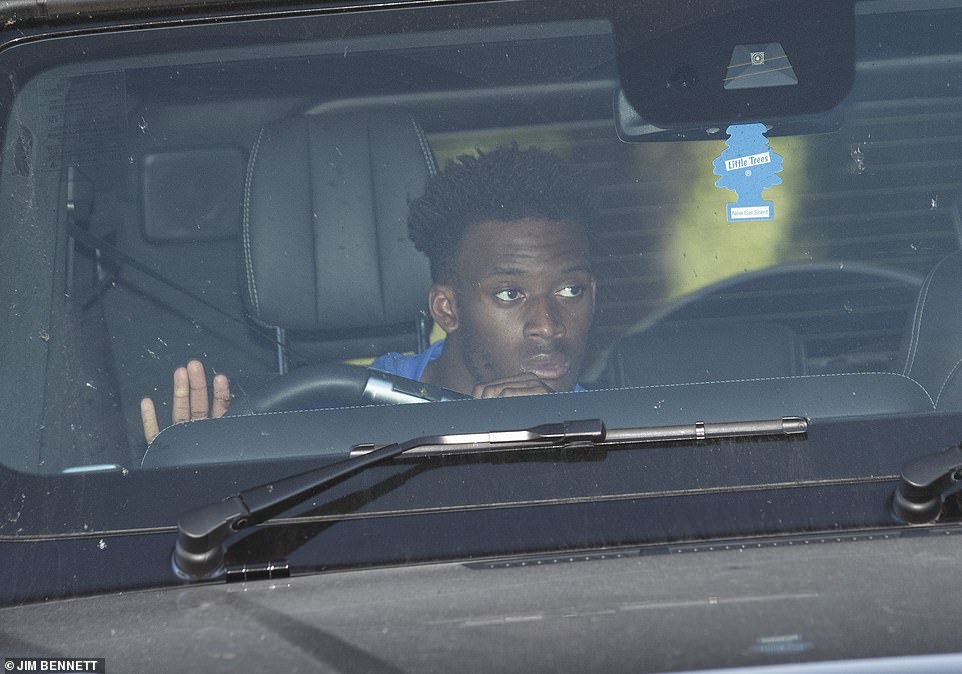 Chelsea and England footballer Callum Hudson-Odoi, pictured arriving at Chelsea’s training ground two days after being arrested by police on suspicion of rape

A police spokesman said: ‘Police and London Ambulance Service were called at 03:53hrs on Sunday, 17 May to a report of an unwell woman.

‘When emergency services attended, a woman reported that she was raped. She was taken to hospital.

‘A man was arrested at the scene on suspicion of rape. He was released from custody and bailed to return on a date in mid-June.’ 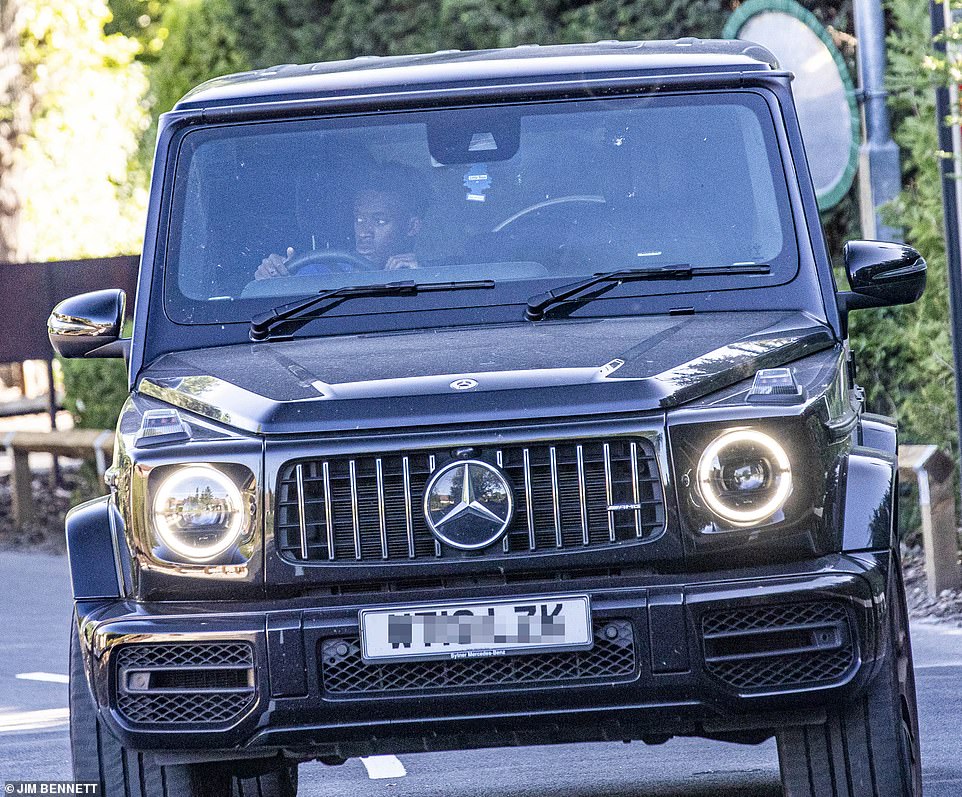 Hudson-Odoi was one of the Premier League’s most high-profile stars to contract the coroanvirus, announcing in March he had caught the virus

The Sun reported that Hudson-Odoi met the woman online and invited her to his home, in breach of lockdown guidelines, sending a vehicle to collect her.

Neighbours of the 19-year-old told The Sun that his acquaintance was ‘very glamorous’ before the property was ‘crawling with police’.

It was revealed by Hudson-Odoi in March that he had contracted the coronavirus, and he reportedly underwent a coronavirus test yesterday, but there was speculation that he would not be allowed to return to training regardless on the test’s result.

There were fears within the club that Hudson-Odoi may have to go into isolation after he broke lockdown rules by meeting up with the woman.

He was seen earlier on Tuesday leaving his mother’s house in South London, and he was also pictured visiting his brother, who is also his agent, at his house on Thursday. People are not permitted to visit family members inside their homes under the country’s coronavirus measures. 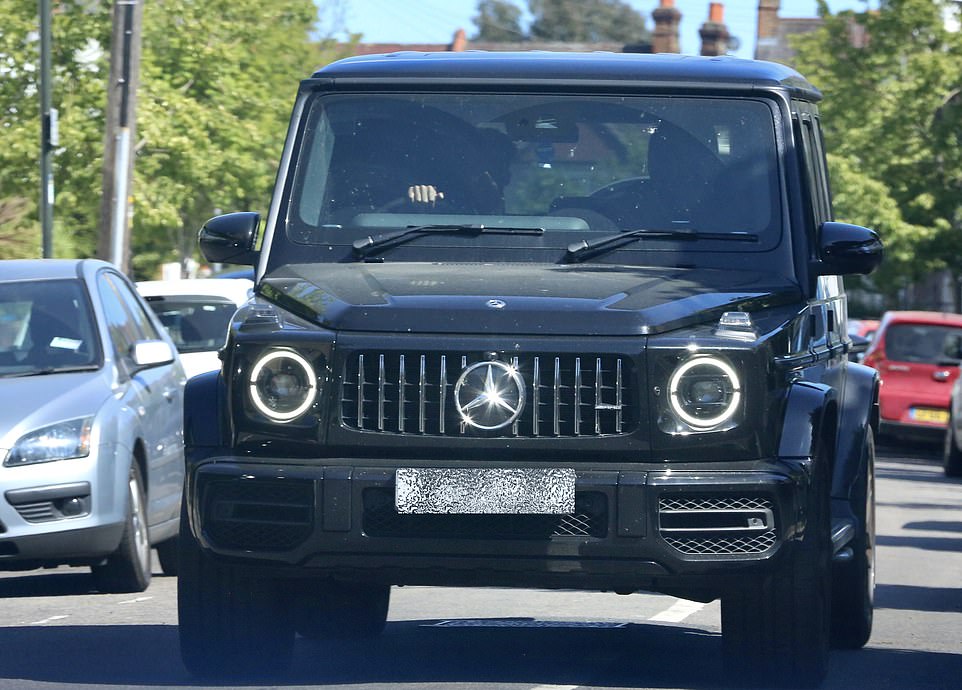 Hudson-Odoi was pictured earlier on Tuesday in the back of his car, leaving his mother’s house in South London, after he had retreated there after being released on bail

Watford’s captain, Troy Deeney, revealed today that he has refused to return to Watford training amid fears of compromising the health of his five-month old son.

The Watford striker has been vocal in his opposition against the Premier League’s Project Restart plans and also raised concerns this week over a lack of screening for BAME (black, Asian and minority ethnic) players.

Speaking to Eddie Hearn and Tony Bellew on Talk the Talk YouTube show, Deeney said: ‘We’re due back in this week. I’ve said I’m not going.

‘It only takes one to get infected. I don’t want to bring that home – my son is five months and he’s had breathing difficulties.

‘I don’t want to put him in more danger. You’ve got to drive back in the same dirty kit. If I’m putting my clothing in with my son’s or my missus’ it’s more likely to be in the house.

‘I’ve lost my Dad, my Gran, my Grandad… I’ve more or less everyone that I care about. So that, to me, is more important than a few quid in my back pocket.’

The 31-year-old added: ‘Within the meeting I asked very simple questions. For Black, Asian and mixed ethnicities they are four times more likely to get the illness and twice as likely to have long lasting illness.

‘Is there any additional screening? Heart stuff to see if anyone has a problem? I just said “If you don’t know the information, why would I put myself at risk?”‘ 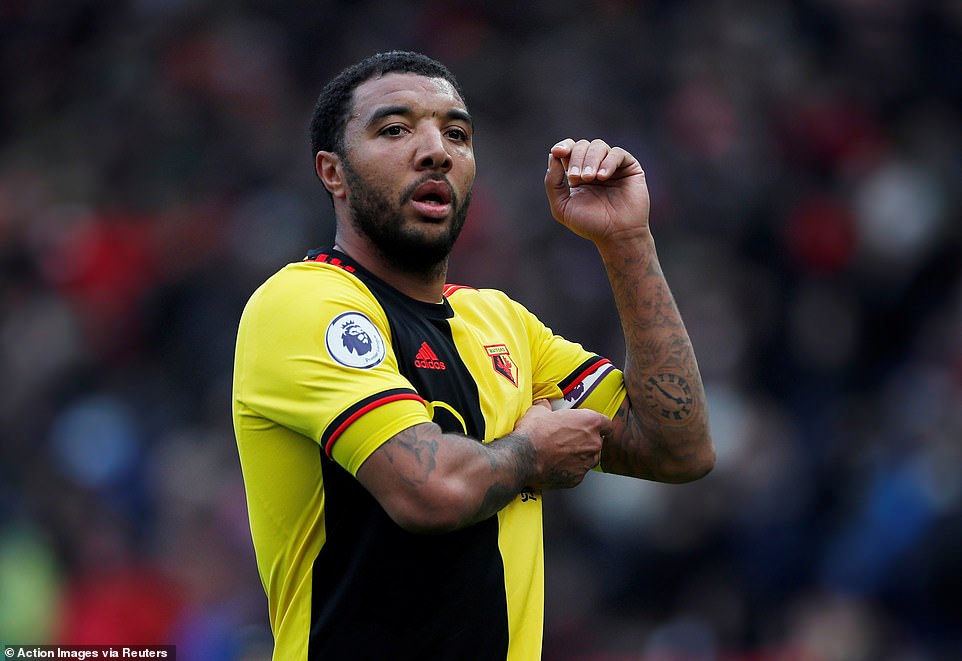