Cam Reddish DENIES he is looking for a trade away from the Knicks despite already falling out of favor… having only joined the team in January!

Forward Cam Reddish has claimed to not have requested a trade away from the New York Knicks, despite speculation that the team may look to move him on before the NBA trade deadline on February 9, 2023.

The 23-year-old didn’t feature in the Knickerbocker’s’ 89-113 win over the Atlanta Hawks on Wednesday night, nor did he play on Monday in a 81-92 win over the Cleveland Cavaliers.

‘I haven’t requested any trades. I have not,’ Reddish told reporters after the Knicks’ defeated his former team in the Hawks. ‘Y’all seem to know more than me, for real. I don’t know what y’all talking about, but I haven’t requested no trade, nothing like that.’

Knicks forward Cam Reddish, 23,  has denied that he’s looking for a move away from New York

Reddish, who’s earning an estimated base salary of $5-6million this year, has been attached to any trade talks for Knicks guard Evan Fournier, as the front office looks to dump the Frenchman’s $18million salary, The Athletic reported.

On Wednesday, talks around the league stated that the Knicks and Reddish had agreed that the best way to move forward is to find a trade partner for the 2019 draft pick.

The Hawks traded Reddish to the Knicks for a protected 2022 first-round draft pick earlier this year in January. The Hawks also sent forward Solomon Hill and a 2025 second-round pick to the Knicks. Small forward Kevin Knox headed to Atlanta.

However, the trade hasn’t worked out for the player, nor the basketball club. Quentin Grimes has excelled at the starting shooting guard role and coach Tom Thibodeau is known for running tight rotations. Reddish and veteran point guard Derrick Rose have not played for New York since December 3 against the Dallas Mavericks. 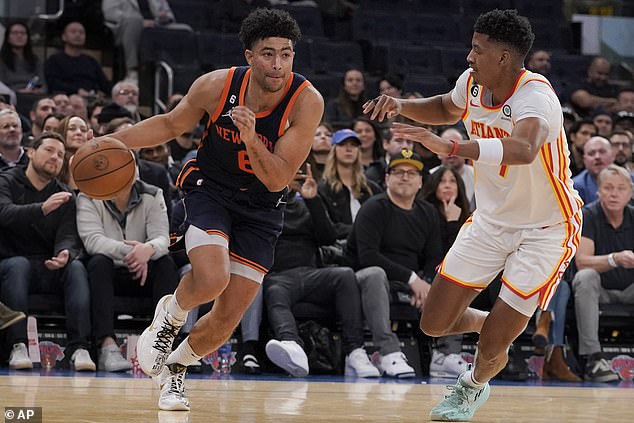 Knicks guard Quentin Grimes has taken over as a starter, with Reddish sitting on the bench

‘I’m not sure [why]. I’m not the one to ask. I’m not really sure to be honest with you,’ Reddish said on his lack of game time. ‘I was doing what I could to the best of my ability on both sides of the floor. I’m gonna say it again, all of the other stuff is out of my control.’

”My role, all that stuff, isn’t necessarily up to me,’ the forward added. ‘I’m just coming in and doing what I’m told to do. […] I’ll roll with what Coach say, and that’s that.’

After this season, Reddish will be a restricted free agent but has a qualifying offer  ($8million) for the 2023-24 season, though it remains unlikely that it’ll be converted. 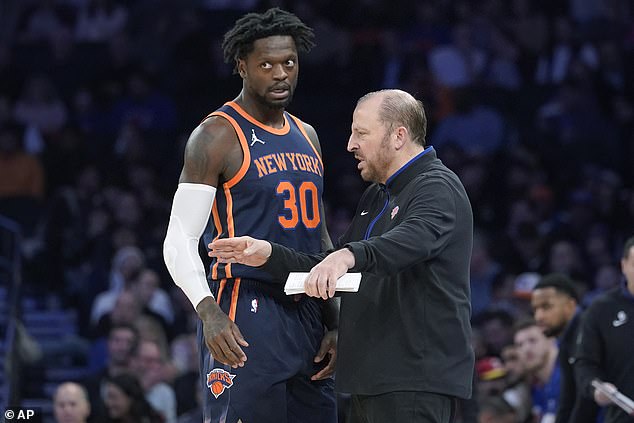 Hawks coach Nate McMillan thought Reddish had the combination of size and skills to be a good fit for Thibodeau in New York after the January trade. But the swingman has rarely had more than a brief stretch where he made an impact.

The Knicks next travel to North Carolina to take on the Charlotte Hornets on Friday nights.