Cambodian woman becomes a US citizen at age 103

A 103-year-old Cambodian woman became a United States citizen on Tuesday after surviving starvation, suffering and war in her native country.

Hong Inh was the oldest of more than 10,000 people who took the oath of allegiance at the downtown Convention Center in Los Angeles.

She came to the United States when she was 97 years old to join a daughter and other relatives.

‘During that time she was so suffering. They didn’t have anything to eat,’ her granddaughter said. 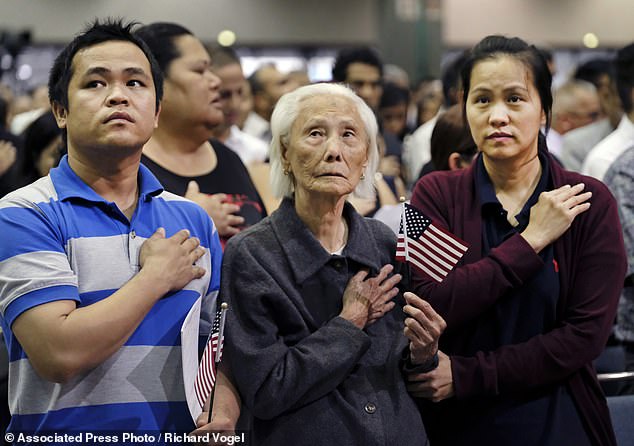 Hong Inh, center, and her grandchildren Kim Ngoun Taing, left, and Siv Taing recite the Pledge of Allegiance. Inh has 30 grandchildren and great-grandchildren in the U.S. and Cambodia

It was ‘just a dream because she wished to live in a peaceful country,’ said her grandson, Kim Ngoun Taing, 36.

Relatives were able to bring her to the U.S. five and a half years ago. She had to be a legal permanent resident for at least five years to apply for citizenship.

‘Our family is so proud and amazed. It’s so unbelievable that my great-grandma achieved one of her dreams,’ 15-year-old Melissa Tea said.

‘She really likes it,’ she said. ‘She likes how she can do a lot of things freely. … She can watch Chinese dramas by herself.’ 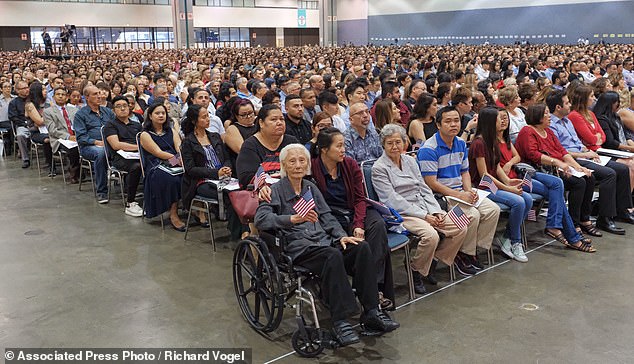 Hong Inh, in wheelchair at front, waves an American flag  and waits to become a United States citizen. At 103, she was the oldest of more than 10,000 people who took the oath of allegiance 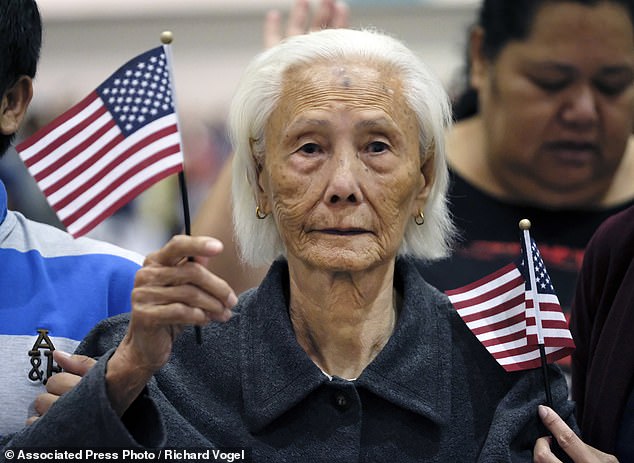 Three generations of her family, from her 80-year-old daughter Hieng Meng to 13-year-old great-granddaughter Melissa Tea attended the ceremonies.

Her relatives helped Hong Inh up from a wheelchair and she stood waving a flag high receiving the oath.

Her grandson spoke the words but she joined in the roar of applause at its conclusion.

‘She says she’s so excited and happy,’ said her granddaughter, Siv Taing, 40.

Later, Hong Inh stood with her hand over her heart for the Pledge of Allegiance and ‘The Star-Spangled Banner’.

Hong Inh was presented with her naturalization certificate by Donna Campagnolo, director of the Los Angeles district office of the U.S. Citizenship and Immigration Services.

‘She’s just an absolute joy,’ Campagnolo said. ‘I think the glow and the smile on her face are just inspirational, really.’

Hong Inh is not the oldest person to become a U.S. citizen.

Manik Bokchalian, a Turkish immigrant who lived in Los Angeles, was 117 when she took the oath in 1997.

The brutal terror of life under the Khmer Rouge

The Khmer Rouge, the communist ruling party in Cambodia between 1975 and 1979, was responsible for the deaths of almost two million people, through executions, torture and starvation.

Its leader, Pol Pot, was determined for society to be transformed into classless agricultural communism.

City dwellers were marched to the countryside to be farmers in labor camps, with those refusing to move shot dead and their homes burned.

Factories, schools, banks and even hospitals were shut down and the population denied medicine.

Many died of starvation or exhaustion as most people from cities had no idea how to fend for themselves in the countryside and farmers were often too terrified to help them adapt.

Anyone linked to the former Cambodian government, filmmakers, writers and anyone deemed to be intellectual deserved to be killed in the eyes of Pot.

Often people were condemned for wearing glasses or knowing a foreign language.

Religion was outlawed, so Christians, Muslims and Buddhists were also executed in huge numbers. 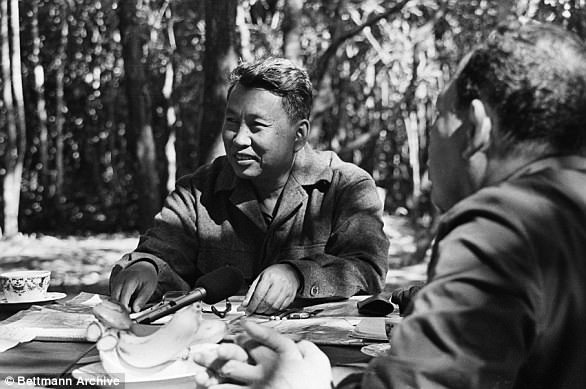 Pol Pot, pictured, was the leader of the communist Khmer Rouge in the 1970s 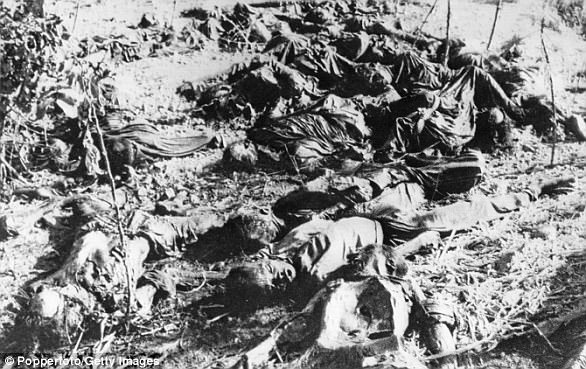 Two million people died during the brutal regime by execution, torture, and starvation