Cambodia’s Prime Minister Hun Sen, who has ruled for 37 years, is taking swag bag to a new level, presenting visiting world leaders with bejeweled luxury watches that were custom-designed in his country.

The prime minister is planning to hand the intricate watches to President Joe Biden and other world leaders who are gathering here for the ASEAN summit of southeast Asian nations.

But he’s not doing so under the table. In fact, the powerful ruler posted detailed images of the watches on his Cambodian Facebook page, which DailyMail accessed to provide a glimpse of the inner workings of the exotic timepieces.

The watches are stamped with ‘ASEAN Cambodia 2022’ and ‘Made in Cambodia.’ They feature gold hands, with simple dashes in lieu of numerals.

Inside the time pieces are a complex assortment of gears – which Hun Sen highlighted in a likely demonstration of his nation’s manufacturing prowess.

The Cambodian leader is consider a luxury watch aficionado, and has been pictured wearing one valued at an estimated $1 million.

Each of the watches comes in a special box, which Hun Sen featured in his post.

Among those who will receive them is Biden, who arrives early Saturday after a stopover in Egypt.

Biden himself wears a high-end steel Rolex Datejust. But under U.S. law, presidents who receive valuable gifts must hand them over to the State Department. If he wants to keep it, he will have to pay out of his own pocket – a process that ultimately will reveal the value of the gift.

Hun Sen faced public scrutiny in recent years after being photographed wearing luxury watches, including by Patek Philippe and Richard Mille, that cost more than $1 million each, while much of the country struggles with poverty.

‘These watches have been prepared and assembled by pure Cambodian technicians, which is part of scientific and technology and developments of Cambodia,’ Hun Sen wrote of the 25 limited-edition watches. 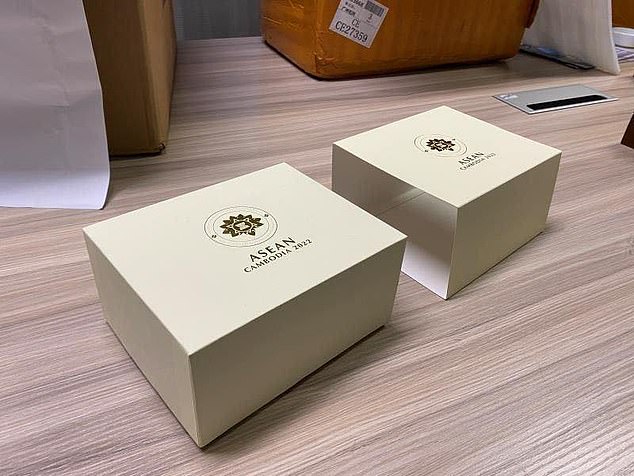 The watches come in a special box. Under U.S. law, presidents who receive valuable gifts must hand them over to the State Department 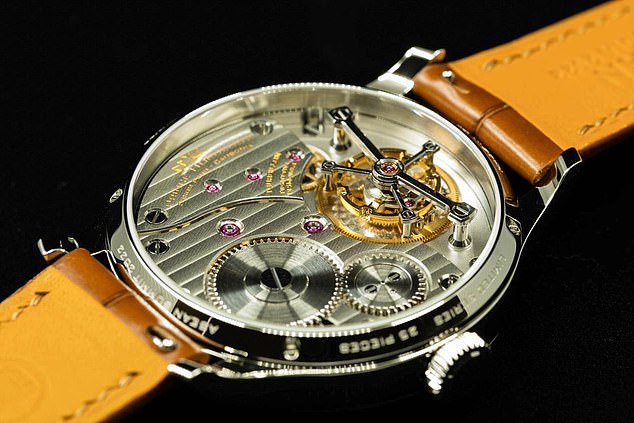 The watches assembled by Cambodian technicians have a leather band 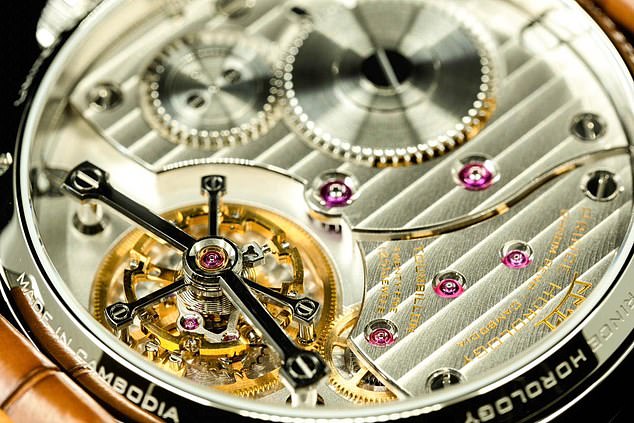 Tourbillion watches are so-called for their intricate inner mechanism 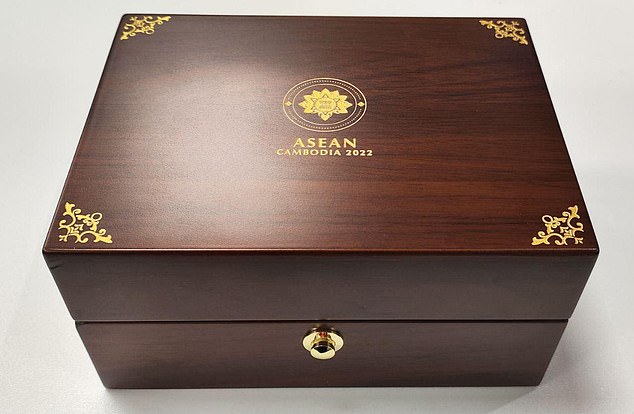 U.S. leaders must declare foreign gifts and pay to keep things of value out of pocket 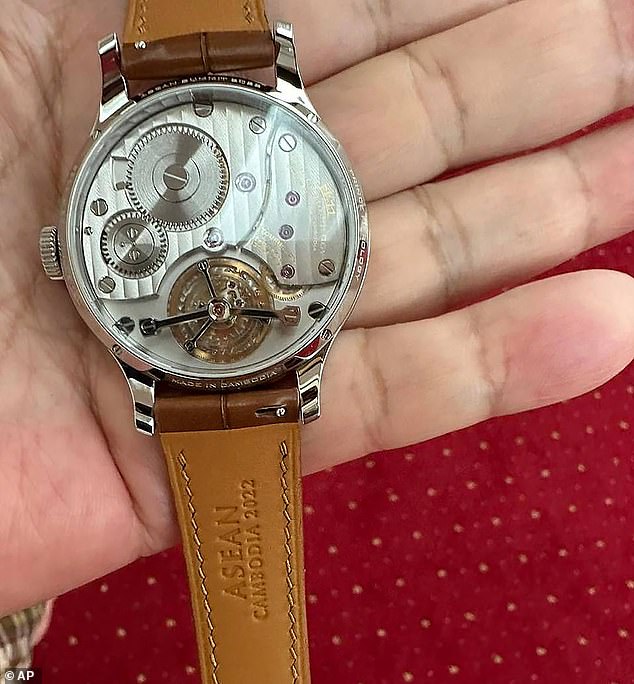 Timing is everything: The technology is meant to counteract the earth’s gravitational pull 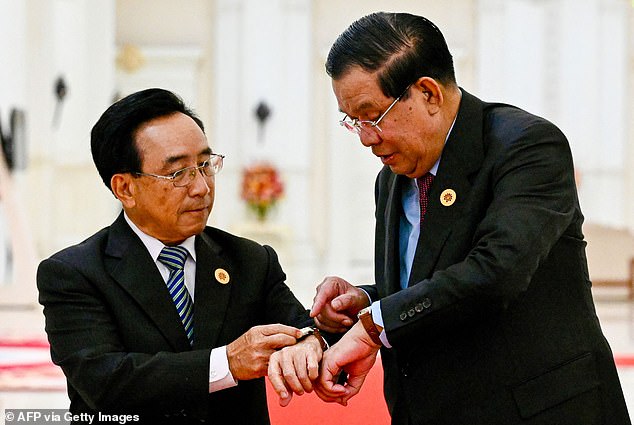 In this picture taken on November 10, 2022, Cambodia’s Prime Minister Hun Sen (R) and Laos’ Prime Minister Phankham Viphavanh (L) look at watches made in Cambodia and offered as gift to leaders attending the ASEAN summits at the Peace Palace in Phnom Penh

A video showed the elaborate inner gears of the watch, engraved with ‘tourbillon’ and ‘twenty-five (25) jewels’ and the name of the Cambodian watchmaker, Prince Horology.

The cost of the Cambodian-made timepieces has not been made public.

One expert said photos and videos of the ASEAN watch appeared to show the sophisticated tourbillon mechanism, which requires a high level of craftsmanship and can carry a six-figure price tag, though he declined to speculate on the value of the Cambodian-made version.

‘The mechanism is not vital to accurate timekeeping, but it is marketed as a complicated feature and (part of) a luxury timepiece,’ said Jeremiah Chan, an editor at Singapore-based Revolution magazine, which specializes in high-end watches.

The prime minister’s office did not respond to requests for further information on the watches, and Prince Horology – part of the Prince Group owned by Chinese-Cambodian tycoon Chen Zhi – could not be reached for comment.

While some Cambodians criticized the extravagance of the high-end gift, others praised Hun Sen for promoting the country’s fledgling watchmaking ambitions.

‘It truly represents our country,’ said businessman Ramaneth Heur. ‘These gifts … show that Khmers can do it and enter the world stage.’

Sok Eysan, a spokesperson for Hun Sen’s ruling Cambodian People’s Party, said there was ‘nothing political or strange’ about the watches.

‘It is the kindness of the host country to give them as souvenirs to leaders,’ he said via telephone.

ASEAN goodie bags have in the past featured signature handicrafts from the host country, including a silver ‘lei’ or miniature garland of flowers from Thailand in 2019.

Tourbillion watches are so-called for their intricate inner mechanism, seen from the outside, and patented around 200 years ago by a Swiss-French watchmaker.

While modern horology has made such designs obsolete, tourbillions are highly desirable to watch collectors with limited editions changing hands for hundreds of thousands of dollars.

The watches also feature ‘synthetic rubies’, he said, that are ‘used to facilitate the watch movement.’

All 25 were designed and assembled in Cambodia over the last 18 months, Tan said, declining to comment on their cost.

But in a country which boasts a rich cultural and artistic history, some questioned the gift.

‘We are not Switzerland,’ said Cambodian rights activist Ou Virak, founder and president of the pro-democracy Future Forum group.

‘It appears desperate, at least from the outside looking in,’ he told AFP, adding the gesture was unlikely to be looked on in a ‘positive’ way.

‘You have to really question who is making the watch,’ he said.

‘I just hope that it is not another Chinese company made with a Cambodian stamp on it.’

According to Radio Free Asia, Prince Horology is part of the Prince Group, among the country’s fastest growing companies, founded by a real estate developer who has gone into gambling and other ventures. The firm is run by Chen Zhi, a naturalized Cambodian who was born in China, and is often seen with Hun Sen at events. 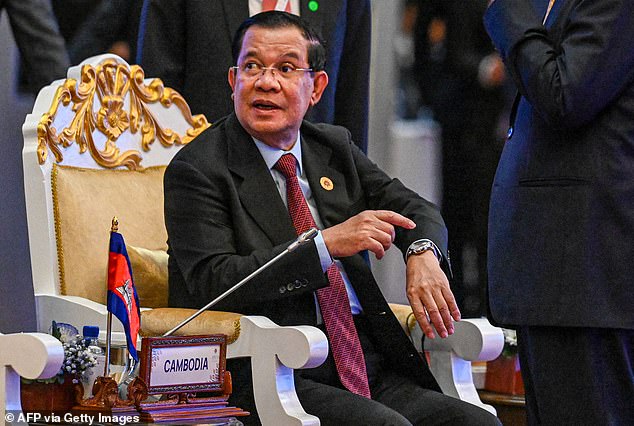 Hun Sen offered the watch to visiting leaders. He has ruled for 37 years