A furious mother was asked to leave her disabled daughter’s sports day after trying to help her join in with a race.

Lynn Harrison wanted to help six-year-old Tammy by lifting her out of her wheelchair buggy and carrying her between her legs so she could feel more included.

She did the same thing last year, so didn’t think it would be a problem, but was astounded when staff at Jeavons Wood Primary School in Cambourne, Cambridgeshire, told her there were ‘child protection issues’.

Teachers said there would also be ‘insurance problems’ if she was to help her daughter, who suffers from cerebral palsy.

Lynn Harrison (pictured) wanted to help her six-year-old daughter Tammy by lifting her out of her wheelchair buggy and carrying her between her legs so she could feel more included in her school’s sports day in Cambourne, Cambridgeshire

She said: ‘When I got to the school they said to me I can’t help Tammy.

‘They told me I couldn’t help her because of insurance and child protection, so obviously I wondered and asked how she was going to take part.

‘Last year she was able to come out of the buggy and walk with me carrying her.

‘When she does that she feels like she’s joining in and she enjoys it more. It also gives her more exercise which is really good for her.

‘But they told me [if she was to take part] her one-to-one would have to push her around in her wheelchair buggy.’

Ms Harrison was told Tammy’s one-to-one teaching assistant would push her in the buggy during the race, however the mum wasn’t having any of it.

She added: ‘I went and sat with the parents and even they thought it was disgusting [behaviour].

‘I said no I will take her out and help her do it. She is my daughter and she needs my help.

‘All the other children were taking part and she wasn’t. They said no due to child protection.’ 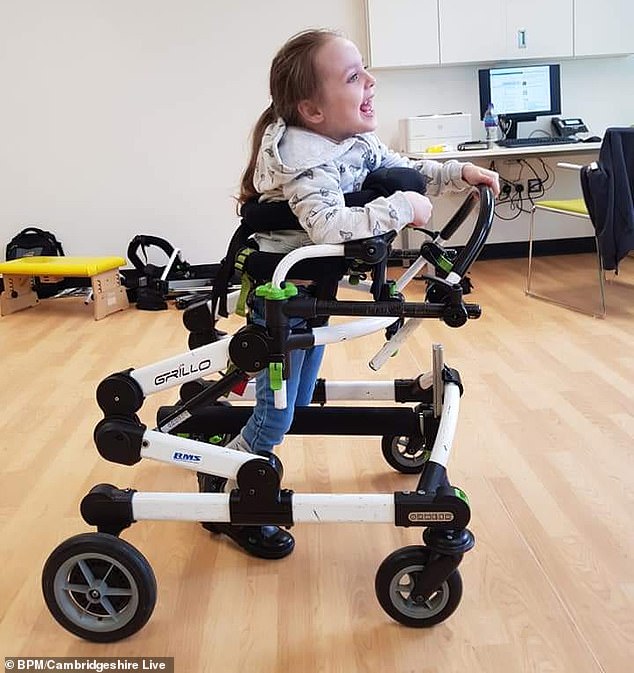 Tammy has cerebral palsy which means at the young age of six she has to deal with permanent movement disorders, including poor coordination, stiff muscles, weak muscles, and tremors

The school stresses it values the welfare of all its 420 pupils.

But Ms Harrison believes she has suffered discrimination, adding: ‘I was asked to leave school premises by a member of staff.

‘She kept asking but I said no I’m not leaving I’m staying here and helping my daughter.

After sports day, Ms Harrison went on Facebook to apologise to any parents who may have objected to her actions on the day.

She said: ‘One person even replied to me that I didn’t cause a scene and I did the right thing for my daughter.

‘I don’t understand. When it suits them (the school) I can go in and help them lift her to use the toilet, but when it suits Tammy I can’t do it.

‘I think it’s absolutely disgusting from the school. If I wasn’t there, she would have had to stay in her buggy and imagine how she felt, sat in her buggy thinking ‘look at all my peers and I am left here sat in my wheelchair.’

‘Her one-to-one even gave her the option and she said I want mummy to help me do it. But the school never gave her that option.’ 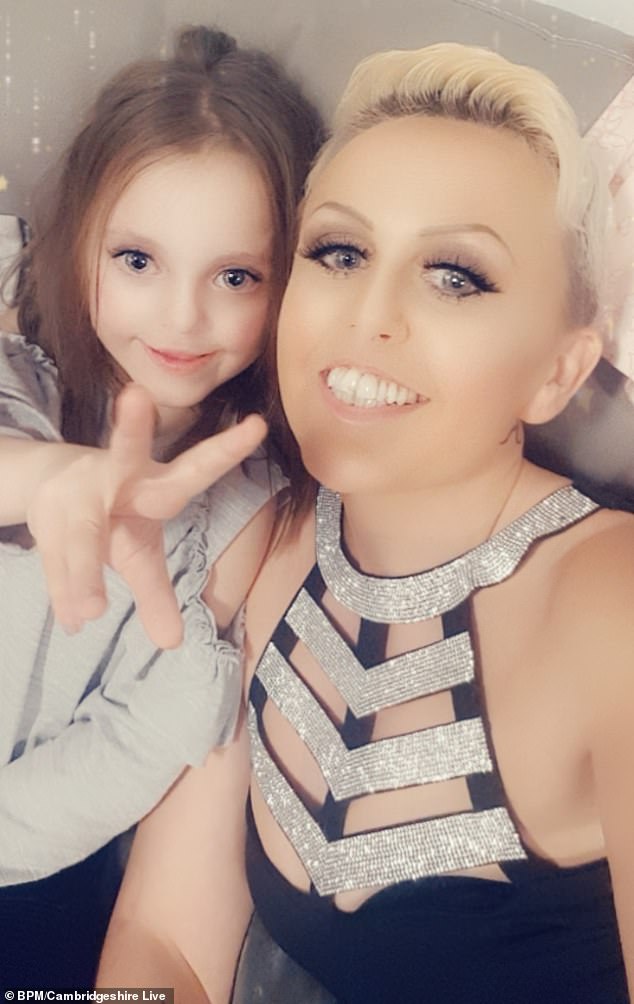 Teachers at Jeavons Wood Primary School said there would also be ‘insurance problems’ if Lynn Harrison was to help her daughter, who suffers from cerebral palsy, with her race. They are pictured together

Ms Harrison then explained that it was not long ago that she had been called into school when they were short staffed.

Tammy’s mother said: ‘A couple of weeks ago they called me in at lunchtime to take her to the toilet.

‘They did that because they didn’t have enough trained staff to do it. During sports day I made a point and said to the teachers ‘it’s ok for me to do that but now it isn’t ok for me to help out.’

‘This is down to discrimination. I simply don’t get it if she is able to do sports day with my help then whats the problem.’

Speaking about her daughter’s reaction when she crossed the finish line Lynn said it made it all worth while. ‘It made her beam.

‘The school had no choice, I was helping her, and when she came over the finish line everyone was screaming and cheering. She was beaming.

‘The smile on her face when she crossed the finish line was just amazing’, she said.

Tammy’s mother went on: ‘I would do anything if it came down to Tammy to feel, and I hate the word but, normal.

‘If it meant she could join in I would do whatever it takes. It can be back breaking sometimes, picking her up out of the buggy, but if it means it puts a smile on her face then it’s worth it.

‘I totally understand that the one to ones aren’t allowed to lift her in the way I can.

‘I totally understand because of everyone’s safety, but because I’m her mum I lift her day in day out and I’m used to it so why not let me this time.’ 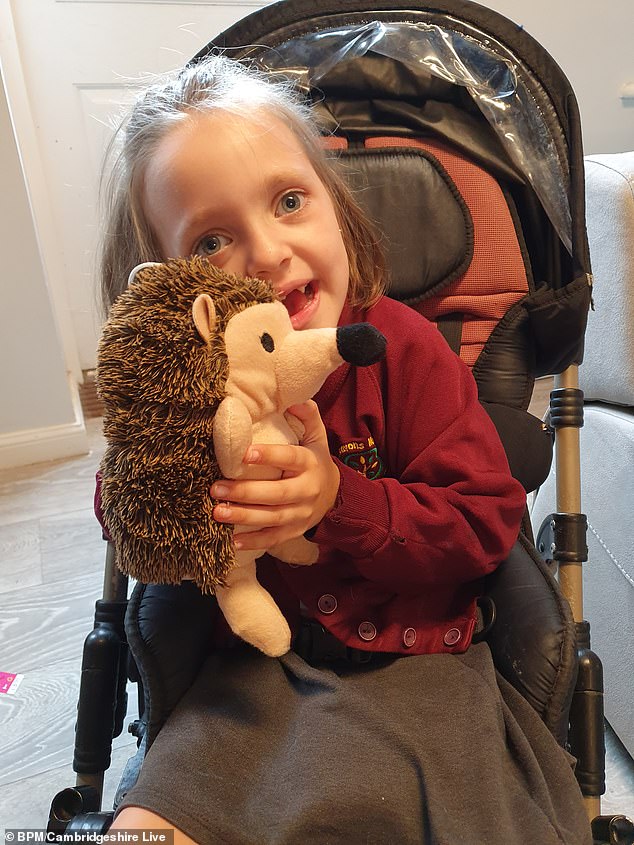 Tammy has cerebral palsy which means at the young age of six she has to deal with permanent movement disorders, including poor coordination, stiff muscles, weak muscles, and tremors.

Cerebral palsy means that physically she is not able to carry out tasks that her peers can but Ms Harrison said the hardest thing is knowing her daughter is mentally capable and knows what’s happening around her.

She said: ‘I strive for her to accomplish what she wants to.

‘Luckily mentally she understands everything, so she knows what’s going on around her, which in a way makes it worse because she does understand when someone’s telling her no she can’t do it because of her ability.

‘It’s just so unfair. It should be more of a come on let’s find a way attitude. Yes, it may not be exactly the same as the others but still, lets find a way.

‘Where is their drive to help Tammy? They are only abiding when it suits them. 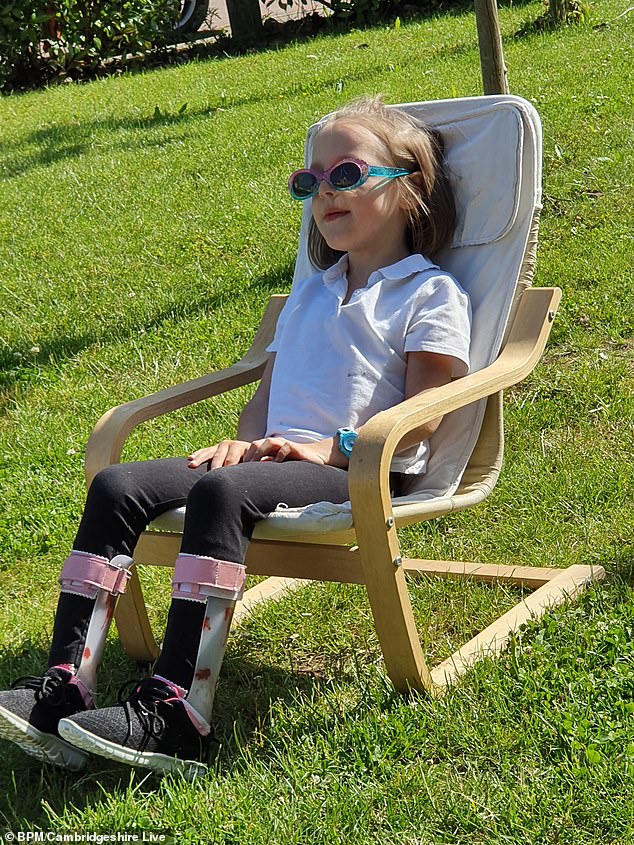 ‘Other parents agreed with me and were saying go ahead and help her, saying ‘lets make it a day for her’. Not one parent had an obligation against it.’

Cambridgeshire Live reported the headteacher of Jeavons Wood Primary School, Sue Wright, issued a statement regarding the incident, in which she requested the story not to be published.

She said: ‘If a parent is upset by a decision taken by the school then we have procedures in place to address those concerns.

‘We always try and solve any issues informally but there is a clear complaints procedure to follow if they are not resolved.

‘No parent has contacted the school informally or formally to make a complaint about sports day.’

She went on to say the school care very much about the welfare of Tammy, adding they did not want to embarrass her.