Camila Cabello was seen chatting and laughing with a pal in New York City on Saturday afternoon.

The 24-year-old Cinderella star showed off her toned curves in an eye-catching Alo Yoga set as she headed to a workout with a book in hand.

Following a quick sweat session the duo were seen riding Citi bikes as they continued to enjoy the weekend.

Sweat session: The 24-year-old Cinderella star was seen rocking an eye-catching spandex set as she headed to get in a workout with a pal in NYC

The Havana singer’s workout look included a bright pink sports bra which showed off her midriff and a pair of matching bike shorts with white sneakers.

She tied a sweatshirt around her waist to keep her muscles warm and was makeup free with her brown hair tossed in a messy high bun.

Though much of the city’s famous inhabitants have been busy with Fashion Week events, Camila has been focusing on music and promotion for Cinderella, instead.

While promoting the film with her co-stars Billy Porter, Idina Menzel and James Corden on his The Late Late Show, Cabello dished on her first date with boyfriend of two years Shawn Mendes. 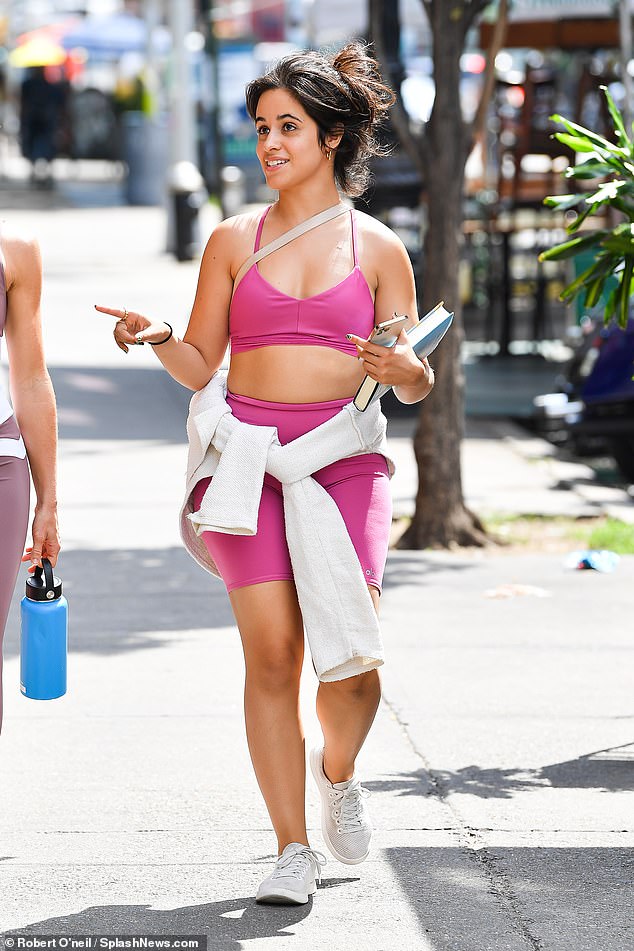 Workout look: The Havana singer’s workout look included a bright pink sports bra which showed off her midriff and a pair of matching bike shorts 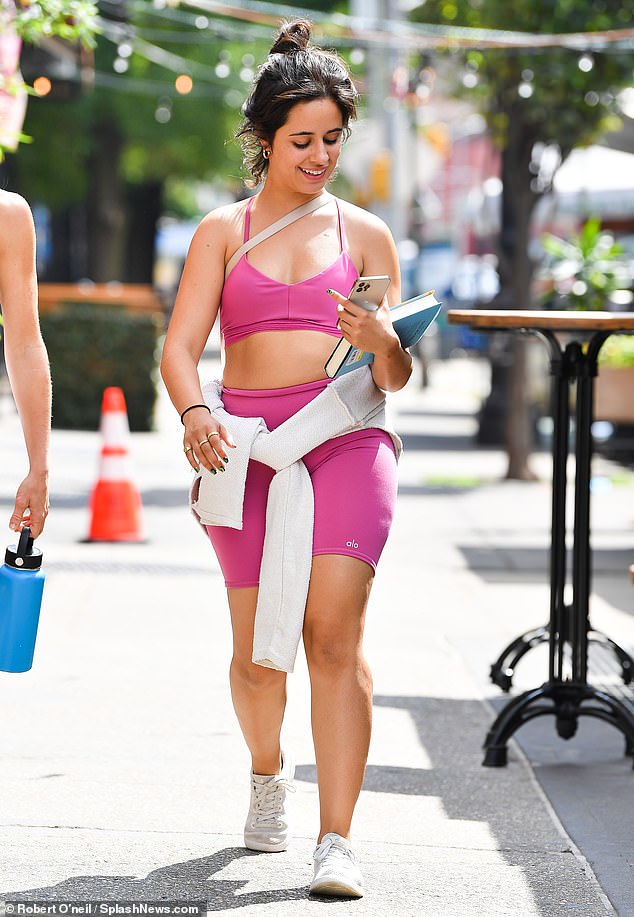 Busy lady: Though much of the city’s famous inhabitants have been busy with Fashion Week events, Camila has been focusing on music and promotion for Cinderella, instead

During the Carpool Karaoke segment, she detailed how she was ‘so nervous’ that she took two tequila shots before he arrived.

‘I swear to god, before Shawn and I’s first date, I was so nervous, I took two tequila shots and sang Defying Gravity’, she confessed while the group was belting out that song in particular.

‘There’s just a lot of stakes before the first time. I’m like, “Oh my god, do I kiss him when I see him?” I don’t know,’ she recalled thinking, adding they had been texting for a few weeks.

And she continued to detail the moments before his arrival. ‘He’s about to come over and I’m so nervous I just can’t take it,’ she said before confessing she had her dad pour her two tequila shots.

Though the pair had known each other for years with Shawn always feeling something for his Senorita collaborator, things only turned romantic after the date. 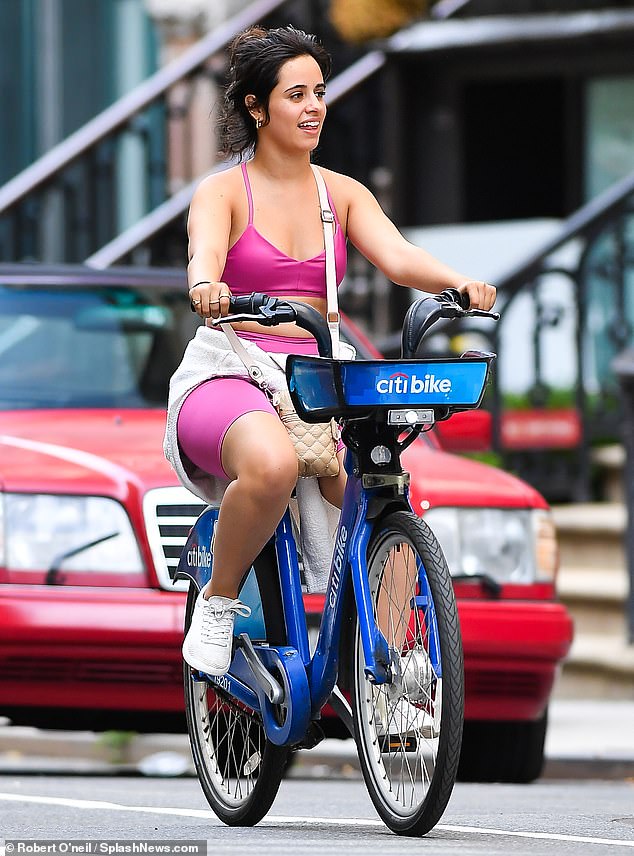 Flying solo: The Senorita singer was seen without beau of two years Shawn Mendes and she recently shut down engagement rumors

On July 2 they celebrated their two year anniversary and he was by her side to celebrate her debut acting role in Cinderella, but had also gotten an exclusive sneak peek on the set.

‘He surprised me the week of the ball and he saw me do one of the scenes,’ she told ET. ‘So he was there for the whole beginning of it, and was so supportive. I’m lucky I have some awesome people in my life.’

In a TikTok video Camila sparked rumors the pair got engaged when she was seen wearing a ring on that finger, but she shut the situation down in conversation with Jimmy Fallon on The Tonight Show.

‘He has not [popped the question], and I am not engaged,’ she clarified but in the past Mendes has insinuated that the pair’s relationship is heading that direction as he said she was ‘absolutely’ his ‘forever person.’ 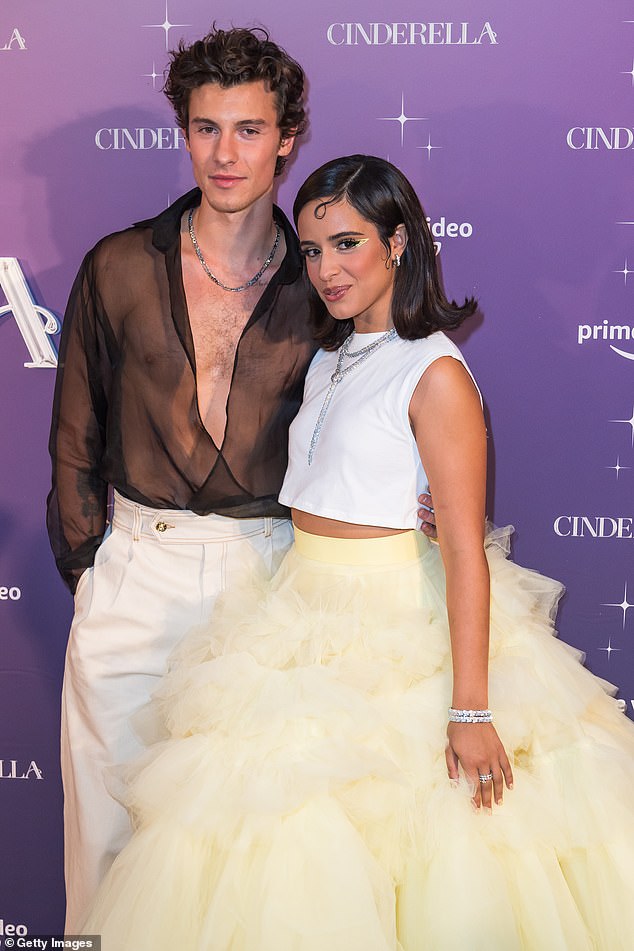 Two years: The loved up couple celebrated their two year anniversary in July but she recently quashed engagement rumors after she was seen with a ring on that finger in a TikTok; pictured September 1