This Sunday, if you do anything, pick up the phone to an older person and simply ask how they are.

That is the message being delivered by the Duchess of Cornwall, who says she had been left ‘heartbroken’ by tales of pensioners who haven’t talked to anyone for more than a month, particularly during lockdown.

Speaking exclusively to the Mail, Camilla says the Covid crisis has given her a new appreciation of her own family — her husband, the Prince of Wales, children Tom Parker Bowles and Laura Lopes, and her five adored grandchildren.

It’s good to talk: The Duchess of Cornwall speaks with women who served as code breakers at Bletchley Park during World War II

But it has also made her even more determined to use her position to ensure that others aren’t left feeling helpless, undervalued and alone.

Camilla, who turned 73 in July, says: ‘I am of an age, that’s the thing to remember! I am technically an old person. So I am just trying to help my contemporaries who aren’t as lucky as me.

‘I have got family, children, a husband . . . I am so very lucky. But you see and speak to these people who haven’t talked to anybody for months. They just want to wake up in the morning and share things with people. Their day is waking up in the morning, having a cup of tea and watching the telly, then trying to read a book . . . but they just long for a familiar voice. Not even a familiar voice, really. Just a voice.’

Here’s how you can help…

Coronavirus has changed our world, but by donating to Age UK today you can help keep the door open for the most vulnerable older people and make sure they aren’t forgotten. To donate please visit: ageuk.org.uk/lonely.

Anyone who needs support, is worried about an older relative or friend, or wants to find out more about the Telephone Friendship Service, can call Age UK Advice free on 0800 169 6565 (8am-7pm) or visit ageuk.org.uk.

Shockingly, recent research suggests that more than a million older people go for more than a month without speaking to a friend, neighbour or family member.

Initiatives such as tomorrow’s Silver Sunday, the national day to celebrate older people, which is supported by the Duchess, are attempts to ensure that deeply saddening statistic is erased.

With social distancing restrictions still in place, Silver Sunday will be different this year, but participants are still being encouraged to connect with older people on their doorstep, online, or over the phone — or through socially distanced tea parties and even a rule-of-six Zumba session.

Speaking about her involvement, the Duchess — who is also royal patron of The Silver Line, a helpline for older people, and President of the Royal Voluntary Service — says: ‘These are such strange times. The whole pandemic has been so peculiar.

‘But I also think people have started to realise how many lonely people there are about.

‘I think I’ve seen a lot — and through Covid I’ve certainly talked to a lot of very lonely people.

‘You suddenly realise when you pick up that telephone there is a person who hasn’t talked to anybody for an age and they are desperate to have a chat.

‘Not about anything in particular, just about ordinary things — what’s going on in their life. Things that you take for granted.’

She also highlights the issues many pensioners forced to shield have faced during lockdown.

‘I was thinking the other day, if you hark back to the good old days — certainly in rural areas — if you had an old person living alone, the neighbours would be pretty good at looking after them.

‘You also used to get the village policeman. It was part of their daily duty to look in on people, go in and sit and talk to them.

‘But now it just isn’t like that any more. It’s very hard.

‘I think through lockdown people could see how difficult it was to be locked in, and people could start to see those neighbours who were sitting in on their own.

‘Your home should be your castle, but it can also be a prison for those who don’t have anyone to talk to.’

The Duchess also praises Silver Sunday in a video message to support the day.

‘As a member of Silver Sunday’s target audience, I can honestly say that it is a completely brilliant initiative,’ she says. ‘This year, of course, it will be very different, with most events taking place virtually rather than in the flesh. So Silver Sunday is more important than ever.

‘Its aim is to tackle the blight of loneliness that affects so many and which, very sadly, has increased significantly over the recent months of lockdown. I want to encourage everyone to take the time to remember the older generation on October 4.

‘Through doing so, you will make the most enormous difference to anyone who is feeling lonely this autumn.

‘In Silver Sunday’s words, “You will fill the day with silver linings and the promise of happy days ahead”.’

‘We can have a laugh – it’s a special time’: Two sets of friends across the generations reveal the joy that reaching out to isolated elderly brings

Gwen, 75, who lives alone in Devon, has weekly conversations with Natalie, 33, who works in music publishing in London. Gwen says:

Sundays are when I feel most alone — all the more so since Covid. I don’t drive, so I’m stuck inside at a loose end. That’s why my Sunday chat with Natalie is such a breath of fresh air.

We’ve been speaking for a year now. Three years younger than my own daughter, she has become like a second daughter to me. 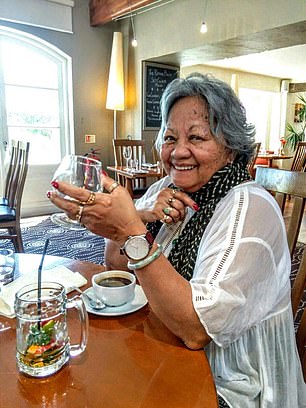 Gwen, 75, who lives alone in Devon, has weekly conversations with Natalie, 33, who works in music publishing in London

I’m separated from my second husband and, after suffering kidney problems in 2017, I moved to be closer to my daughter, who has a seven-month-old son. It was a big adjustment moving at my age.

I joined an Age UK group that got me mixing with local people. It’s how I found out about Age UK’s Telephone Friendship Service, which matches over-60s with volunteers for a weekly chat. I was paired with Natalie last October and our weekly half-hour conversation really helped me through lockdown.

Conversation has always flowed naturally. Natalie is an interesting young lady who has family from Peru. I am from Singapore originally and moved here in 1971 with my first husband, who was a British serviceman.

Natalie isn’t married but there must be a man out there — she’s such a pretty girl. We haven’t met but she sent me a picture of herself with her Christmas card. Talking to her is a real highlight of my week. 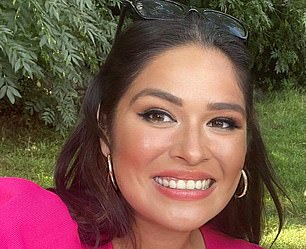 Natalie (pictured) says: When I first signed up, I thought of it as doing something for someone else — but it quickly became far more than that. Gwen is now part of my life

Natalie says: When I first signed up, I thought of it as doing something for someone else — but it quickly became far more than that. Gwen is now part of my life. The other day she found a Gordon Ramsay recipe for scrambled eggs that used creme fraiche. We thought it was going to be a game-changer, so both decided to try it at our homes. Well, it turned out to be a disaster for both of us, which we found very funny.

I signed up as a volunteer because I’m so close to my grandparents and couldn’t bear the thought of an older person feeling lonely. Like many, I had a busy schedule but realised I could spare half-an-hour on the phone each week.

Now many of us no longer have a morning commute, there’s no excuse not to do something worthwhile with that extra time. It’s been a worrying period for everyone and I’ve really appreciated Gwen’s more philosophical perspective on things.

Former nurse Pollene, 80, lives in Wandsworth, South-West London, with the support of carers, Age UK Wandsworth and her daughter. She has been speaking weekly to Clare, 39, also from London, for four years. Pollene says:

My calls with Clare mean a great deal to me. We have a little chat and then she reads to me, which I love. It’s a joint effort choosing the books.

We were first introduced four years ago when Clare began visiting me in person. It only became a telephone service after lockdown. I have a lot of medical problems which means I’m largely bed-bound so have been shielding since March. 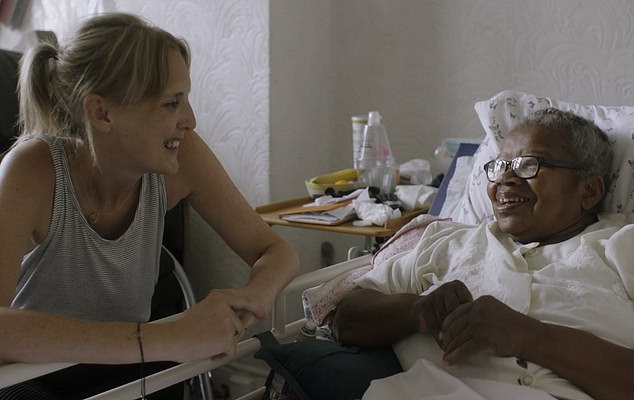 Former nurse Pollene, 80, lives in Wandsworth, South-West London, with the support of carers, Age UK Wandsworth and her daughter. She has been speaking weekly to Clare, 39, also from London, for four years. They are pictured together above. Clare and Pollene can’t meet since lockdown but chat online

My daughter lives nearby so I’m still able to see her, but it’s a scary time. I feel nervous about going out and meeting people. I really look forward to my calls with Clare; it’s my special time. We have a laugh together and it really brightens my day.

Clare says: I was matched with Pollene because her family had been concerned that, although she had many carers, they were so busy Pollene didn’t get a chance to have a proper chat with anyone.

It quickly became a two-way conversation — we shared stories about our childhoods and life in general. Pollene dictated her life story to me and I had it printed as a book for her.

Since lockdown I haven’t been able to visit in person, but I felt it was even more important to keep in contact. Due to a generous donation, Age UK Wandsworth were able to give Pollene an iPad, so we’re now able to do video calls twice a week.

We both love music so we sing or I play the piano and ask Pollene to name the tune. I also read aloud.

Becoming a befriender has really helped me with my own wellbeing. I live with long-term health problems after having cancer treatment when I was a teenager.

After I became unable to work, I lost my sense of purpose a bit. Being able to be of support to someone else has really helped to rebuild my confidence. I’ve gained a wonderful friend in Pollene.

Now that I’m aware many live isolated lives, I make an effort to smile or say good morning in the street. I also check in on neighbours to see if they need anything. In uncertain times that moment of connection can make you both feel better.