One of the most majestic mountains in the Lake District, Blencathra, comprises six separate fell tops surrounded by gently undulating slopes and steep crags.

On a clear day those who venture to its 2,848ft peak are rewarded with panoramic views of picturesque countryside that stretch for a hundred miles.

Those living nearby, blessed with its presence have, unsurprisingly, long been passionate about preserving its imposing beauty.

But few could have anticipated the ugly scenes that would erupt between them and other admirers of Blencathra after a battle started about how best to maintain the mountain — a row that raged for four years with all the force of a Cumbrian gale before finally concluding this week.

It began when Blencathra’s owner, Hugh Lowther, the 8th Earl of Lonsdale, announced that he was selling all 2,677 acres of it in May 2014.

Horrified by his declaration that he hoped to offload the landmark onto a ‘daft Russian’ — on the basis only a wealthy foreigner would be likely to afford the £1.75 million asking price — Debbie Cosgrove, 60, set up a Facebook group, Friends of Blencathra.

The plan was to raise enough funds to buy Blencathra together and keep ownership local. A tenner here and there, Debbie hoped, would quickly tot up.

Her idea proved popular, but although £250,000 was raised, it was nowhere near enough and instead sparked a bitter feud between Friends of Blencathra and those who claimed the group — granted charitable status after a month — had acted in a duplicitous and draconian manner.

The critics were led by Martin Knowles, 53, who set up a Facebook group in protest, and claims Friends of Blencathra refused to answer basic questions as to how a group of amateurs planned to buy a mountain, let alone run it. 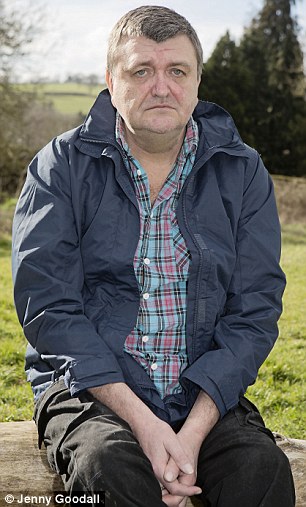 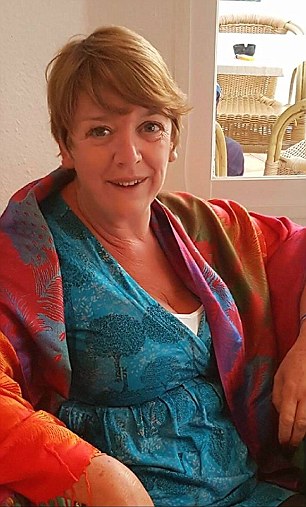 Critics also say that even after failing to raise the required funds, the Friends of Blencathra refused to admit defeat, and delayed requests from disappointed donors to give their money back once they realised they wouldn’t be owning the mountain after all.

There have been allegations of bullying on both sides, with the two warring factions in such fierce opposition that a police inquiry was launched after reports of death threats and offensive video messages.

Friends of Blencathra was reported to the Charity Commission — the regulator of charities in England and Wales — which this week released the findings of its investigation.

The Commission report said that although Friends of Blencathra was ‘well-intentioned’, lessons could be learned, and advised that in future charity trustees should be clear what donors were giving money to and that donors are entitled to ask for their money back if an appeal fails.

It said individuals wanting to set up an appeal should consider if setting up a charity is the right option and ‘trustees should be mindful of the need to be transparent.’

All of which, for Martin Knowles, has been obvious from the start.

‘All I’ve ever wanted is to help the many people who just want their money back,’ he says. ‘Friends of Blencathra have been so secretive, and Debbie has made insinuations about me that are totally untrue.’

As for Debbie Cosgrove? She doesn’t seem any more inclined to forgiveness, telling the Mail, ‘Mr Knowles has made some serious allegations because he has health issues.’

So who to believe amid claim and counter claim? And what to make of the whole sorry mess? Certainly, this is a cautionary tale of the divisive power of social media.

It is a warning that the most altruistic endeavours can be mired with venom and a reminder that deep-seated tensions can simmer below the surface of seemingly peaceful communities in areas of breathtaking natural beauty.

And none of it would ever have happened if a (relatively) cash-strapped aristocrat hadn’t decided he had to get rid of the mountain owned by his family for 400 years.

A thrice-married eccentric with an arch sense of humour and a desire to be known simply as ‘Hugh,’ the Earl of Lonsdale, 68, worked as a long-distance lorry driver for 15 years before inheriting his earldom on his father’s death in 2006.

Hoping the money from Blencathra’s sale would help pay off a £9 million inheritance tax bill, the mountain was described as ‘a unique investment opportunity.’

Sealed bids were invited and the Earl pledged to throw in his title, Lord of the Manor of Threlkeld (a village at the bottom of the mountain) as an additional perk.

Ownership was largely academic —Blencathra is part of the Lake District National Park which prevents development and ensures it will always remain open to the public — but the idea of a foreigner acquiring it simply ‘to show off,’ as the Earl put it, inevitably raised hackles . . .

Soon after the sale was announced, Debbie Cosgrove said: ‘If the “daft Russian” wants it so he can say “I’m Lord Threlkeld” or to have a piece of paper in a portfolio so he can sit at his dinner table and say, “I own a mountain,” it is not someone who’s passionate about Blencathra.’

A married mother-of-two who worked for her local council and had lived in the nearby village of Allerby for more than 20 years, Mrs Cosgrove wasn’t alone in feeling that way.

There was celebrity endorsement from broadcaster Melvyn Bragg, who had a cottage in the area, mountaineer Sir Chris Bonington became honorary president and, Debbie says, donations went ‘crazy’. 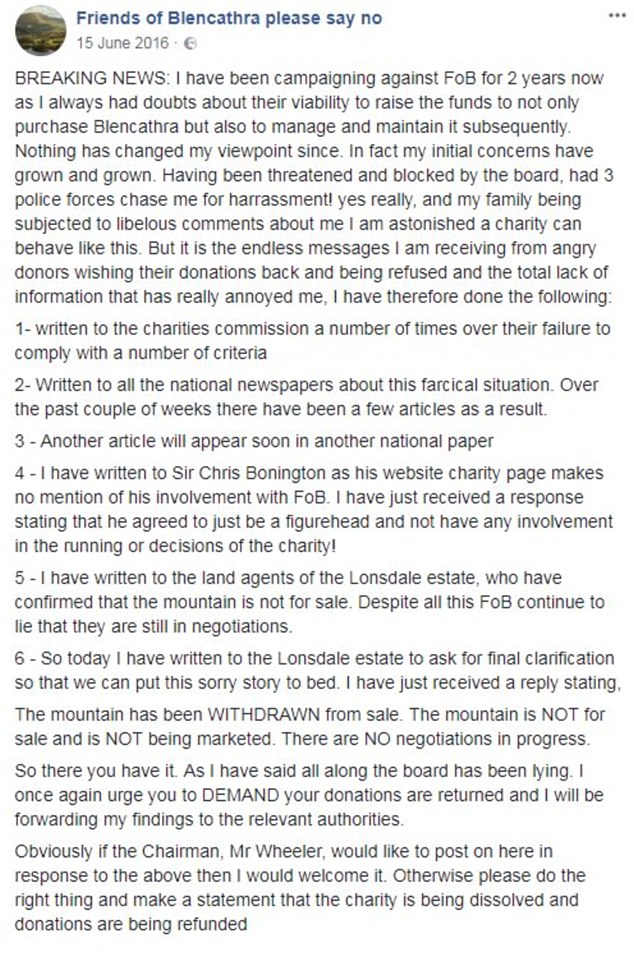 But as she joked about plans to celebrate their purchase with a toast on the summit, trouble was brewing after Martin Knowles, a divorced father-of-three from Daventry, Northants, read a newspaper report about the plan.

While it may seem curious that the ringleader of the opposition would live some 200 miles away, Mr Knowles says he loves the Lake District, has climbed Blencathra ‘many times’ and felt strongly that, ‘not only did Debbie not have the funds to buy the mountain but she had no idea of the risks involved or how to maintain it.

What would happen to the farms on it, for example? I sent a message asking how she was going to do it.’ Mr Knowles claims that the next thing he knew, he was ‘blocked’ — banned — from the Friends of Blencathra Facebook group (one of several who claim they were blocked for the same reason).

‘They banned me because they couldn’t answer them,’ he says.

So he did what any angry person does in this digital age and responded with a retaliatory Facebook page, ‘Friends of Blencathra please say no.’

On it, he wrote hostile comments about the group, accusing members of being stupid and liars. Tensions were heightened that July when the Daily Telegraph reported that two members of Friends of Blencathra had been sent alarming emails with links to YouTube videos.

In one video, a man pretends to garrotte a victim before disposing of his body. In another, from a different account, a group of people in a rural location are shown, with the caption: ‘In our national forests there are currently 400 unsolved cases of missing persons. Often the bodies are never found.’

Another Friends of Blencathra member said he was called and told to ‘back off,’ and that the caller knew where he lived, then told to ‘consider your own future.’

No details of the alleged perpetrators or victims were made public by Cumbrian police, which launched an inquiry but arrested nobody. Martin Knowles, the most outwardly vocal opponent, insists he wasn’t responsible for any of it.

‘It’s one thing saying buying the mountain won’t work but another saying “I’m going to kill you,”’ he says. ‘All I ever said was that the Friends of Blencathra were lying to people and had no idea how to maintain this mountain.’

A quietly-spoken man, who admits to suffering from depression so severe he had to quit his job as manager of a car dealership ten years ago, Mr Knowles gave the Mail the log-in details to his Facebook account so we could see correspondence he’s had from donors who felt let down.

Cumbrian police concluded their inquiry into the reported death threats in 2015, as the group struggled to raise sufficient funds. The following May, Debbie Cosgrove resigned as chairman, along with her vice chairman and treasurer.

Her replacement Dave Wheeler, 65, a married father of two from Matlock, Derbyshire, said Debbie had done a ‘fantastic job’.

Of 13 Friends of Blencathra trustees, six have resigned since 2014. One local told the Mail it looked like Debbie had jumped ship when it became obvious the plan wasn’t working and Dave Wheeler had been handed a poisoned chalice — a sentiment echoed by Mr Knowles: ‘she must have known it was falling down’.

With the Friends of Blencathra’s bid rejected — and no other viable contenders — the mountain was withdrawn from sale. The Earl’s estate agent later claimed he’d sold off paintings and property to raise the inheritance tax instead.

But, the saga continued, because Friends of Blencathra had some £250,000 of donor funds to return.

The Charity Commission says when it got involved in early 2016 ‘the charity’s filing of financial information was incomplete’ and the refund process is said to have descended into chaos.

‘People were told they couldn’t get a refund because they didn’t have a receipt,’ says Mr Knowles, who believes it was ineptitude, not malice, that made them so slow to return donor money.

‘They’d been sent cheques they’d made no note of and there was no process in place. One old lady had given £1,000 — it took me a lot of work to get that money back. I wrote to FOB and the Charity Commission constantly. It was disgusting how donors were treated.’

Not all donors felt aggrieved — Sarah Corrie, 53, who has lived in the village for 12 years and gave £10, said: ‘The group worked damn hard to get everything right. There has been a lot of hoo-ha, but Friends of Blencathra had everybody’s interests in mind, and were trying to do the right thing.’

However, another woman the Mail spoke to, who donated £40, said: ‘We were consistently lied to. Even when I posted a copy of the letter from the Land Agent stating the sale was off, Friends of Blencathra insisted the sale was going ahead.

‘I had others contacting me — OAPs who’d given more than I had — who wanted their money back if the sale fell through.’

She was eventually refunded, but objects to the £6 admin charge and maintains there were some ‘deeply unpleasant people’ associated with the group.

Despite the animosity, it sounds as though Mr Knowles has enjoyed his role as champion of the disappointed donors. ‘It’s helped give me something to focus on and the number of friends I’ve gained from this has been fantastic,’ he says.

As for Mrs Cosgrove, she told the Mail she was ‘not involved with the group any more.’

Perhaps the whole incident is best summed up by lifelong resident Donald Angus, 80, who worked as a ranger for the Lake District National Trust for 30 years before retirement.

‘I thought it was ridiculous that they were even trying to buy it,’ he says. ‘What are you going to do with it? It’s absolutely crackers.’