A road safety campaigner has spray-painted a giant penis on a bump in a road in an attempt to get authorities to fix the problem.

Auckland man Geoff Upson posted a video to Facebook of the section of road showing his bright green handiwork as cars are seen driving over the bump.

Mr Upson said he was disappointed at the level of service he received when trying to get the road fixed and so tried the more unorthodox approach.

‘We pay huge amounts of money with road user charges and fuel tax. A basic level of responsibility should be a flat road surface,’ Mr Upson wrote in the caption to the video.

Other road users also chimed in on the state of the road saying they were frustrated the problem had not been fixed.

‘That part of the road is ridiculous. I always forget about it and cringe when I hear my suspension crunch going over it,’ said one commenter.

When asked what he thought of young children seeing the graffiti the self-employed tradesman said he thought children should not be sheltered from the real world.

‘I think if children are sheltered and not taught things that are a part of the real world then these things will come as a huge shock later in life. I think it’s perfectly acceptable for children to be exposed to ordinary things in the world,’ he said.

New Zealand Transport Agency has since confirmed to the NZ Herald that the agency has a programme of works to level that section of road next week if the weather allows.

‘Our team is constantly on the state highways to address any safety issues or hazards.’ NZTA Northland System Manager, Jacqui Hori-Hoult said.

NZTA did, however, also condemn Mr Upson’s actions saying that he put himself in danger when painting the road and the graffiti was a potentially unsafe distraction to motorists.

Mr Upson has previously campaigned to make his region’s roads safer by implementing better education programs for young drivers and building more passing bays on open roads, among other initiatives. 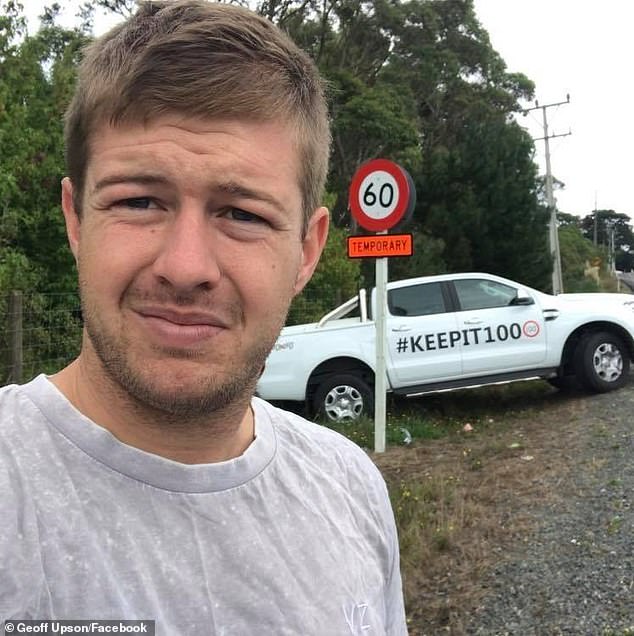