Campaigners are set to bring London to a standstill today as thousands of activists are set to stage a mock funeral march through the capital.

Protesters have arrived in Parliament Square as they continue to wreak havoc in London. Extinction Rebellion have boasted that up to 500 people could be detained by police in the culmination of a week of ‘swarming demonstrations’.

Authorities have advised motorists to avoid travelling through central London as protesters take over the city.

The protestors have sparked gridlock throughout the week by blocking major bridges and bottlenecks in protests which have spread across the country. 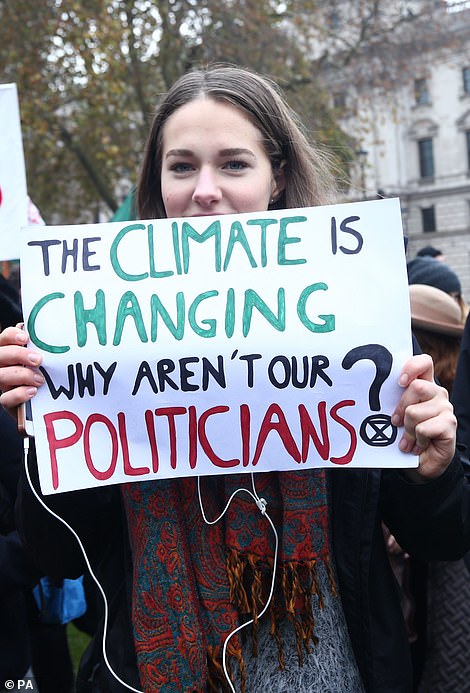 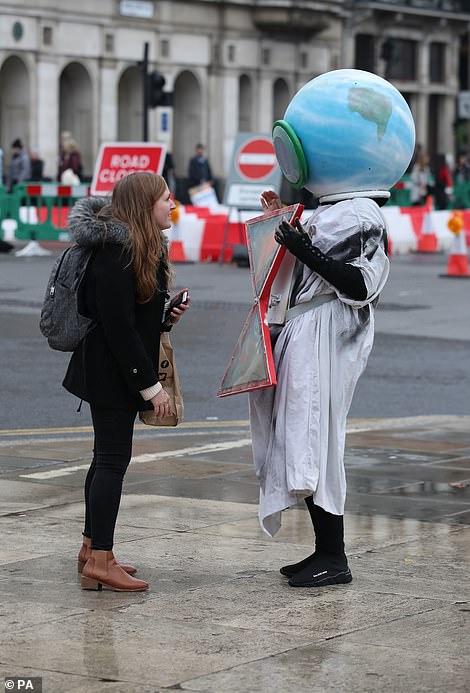 One young woman (left) holds up a sign which reads: ‘The climate is changing why aren’t our politicians’. While other demonstrators (right) dressed up with a model of the earth on their head 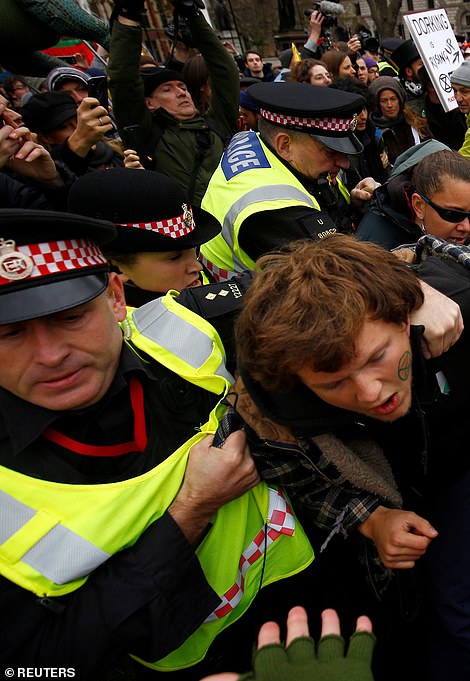 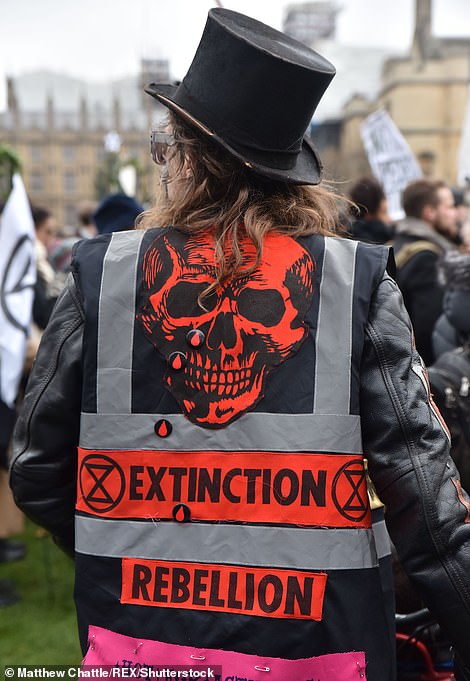 Protesters (left) were held back by police as they marched in Parliament Square, while others wore outfits with the group’s name ‘Extinction Rebellion’ 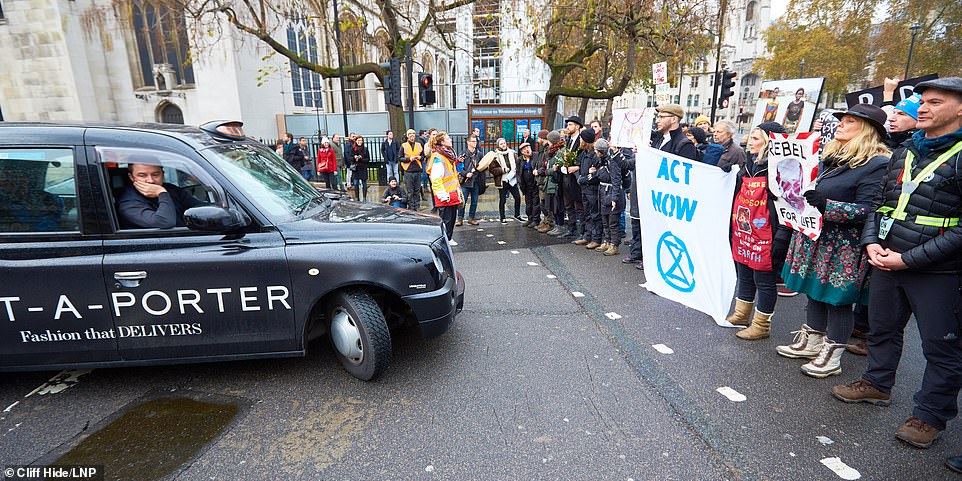 Protesters, who range in professions from yoga teacher to tech entrepreneur are led by professional activists who are opposed to fracking, a third runway at Heathrow and commercial flights.

They believe the country has reached a ‘tipping point’ in which direct action is the only option left to change political course.

Organisers have pledged to continue even more disruption following protests throughout the week.

The Extinction Rebellion demonstrations are part of a campaign of mass civil disobedience co-ordinated online among environmental groups. 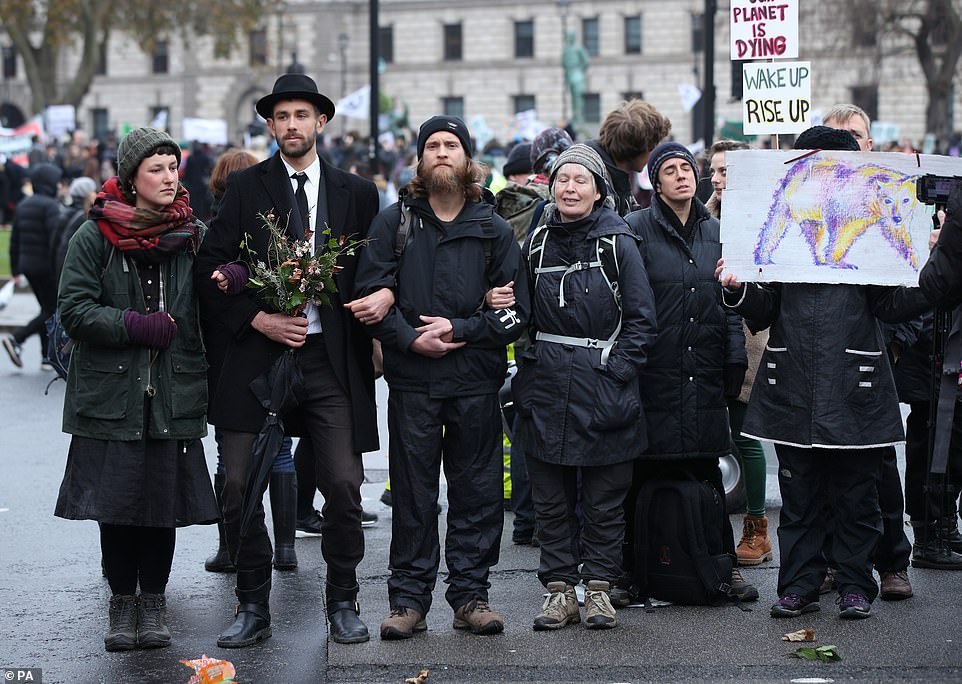 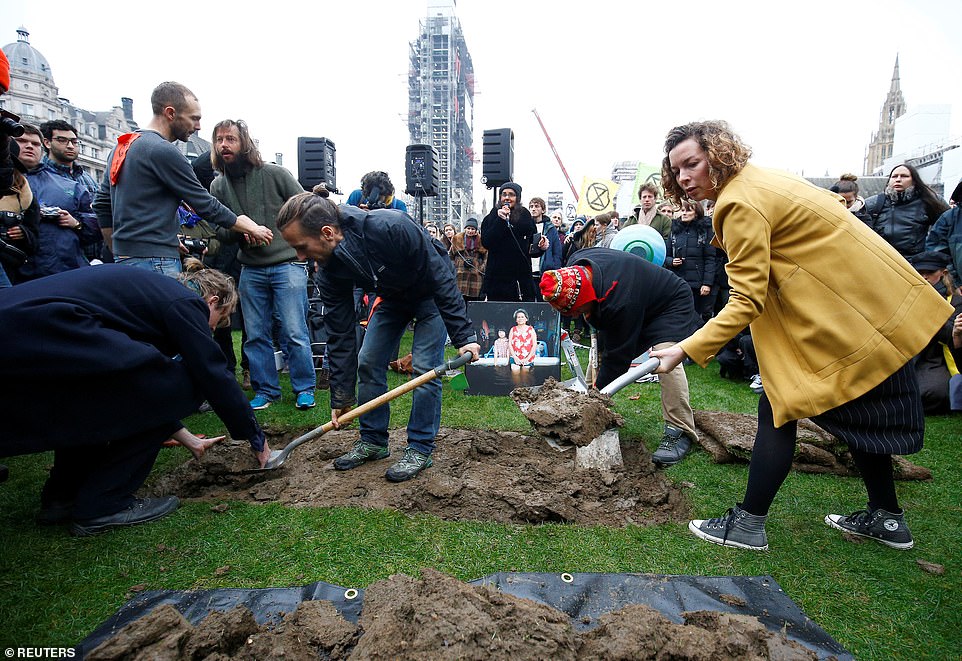 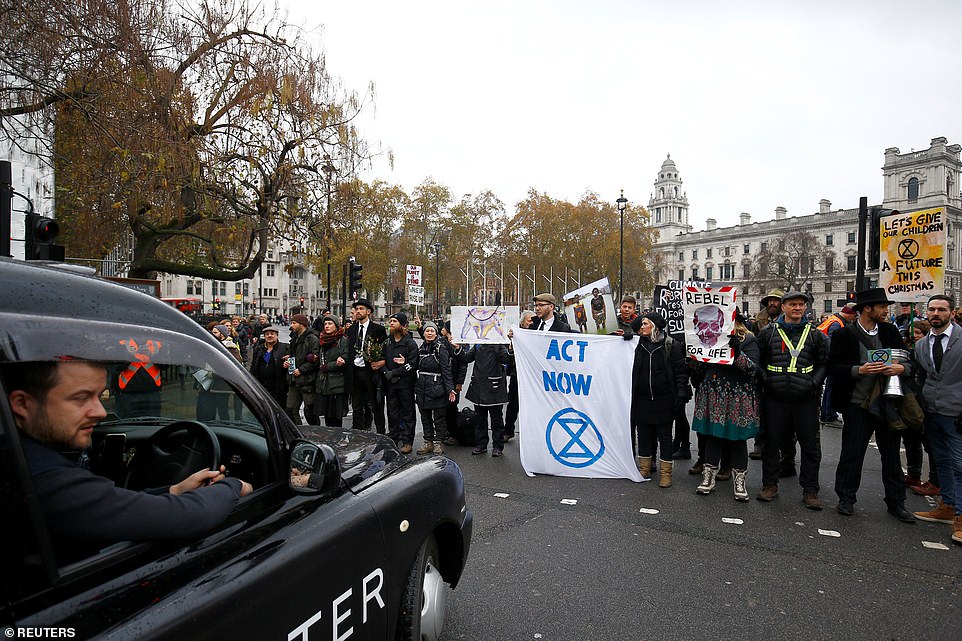 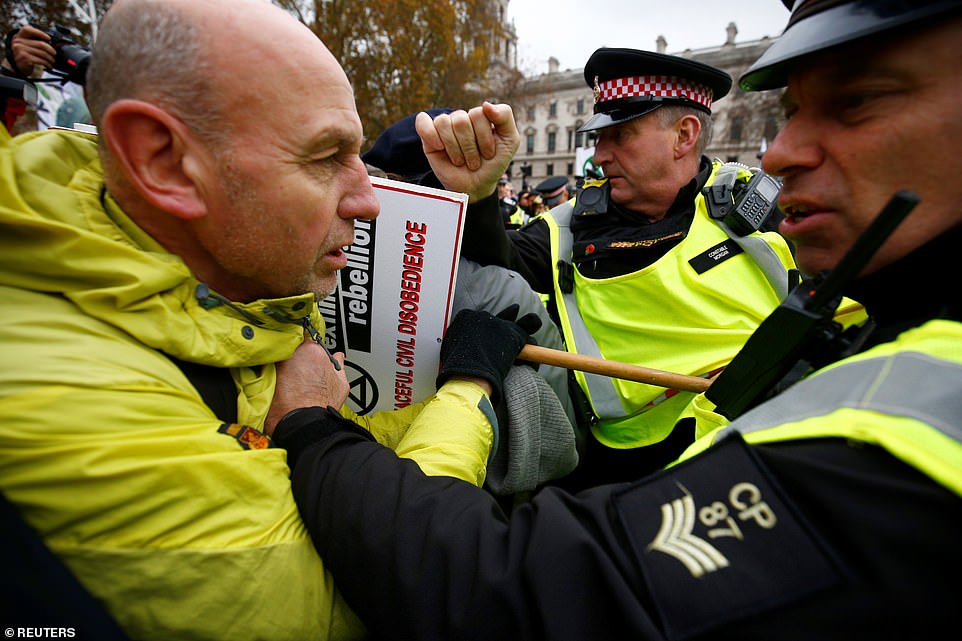 One said: ‘We will do ten bridges, we are looking at 500-plus arrests which will be the most from a political protest for a decade of two.’

University technician Nick Cooper, who has been arrested twice in a fortnight, said the aim of the protesters was to ‘get the Government to the negotiating table.’ Speaking as he attended another protest earlier this week in breach of his bail conditions, he added: ‘I do a lot of peaceful protests like this one. We have to be disruptive like this in order for those in power to take notice.’ T

Despite their enthusiasm, angry critics claim the militant activists are creating even more pollutions by creating long and unnecessary tailback. 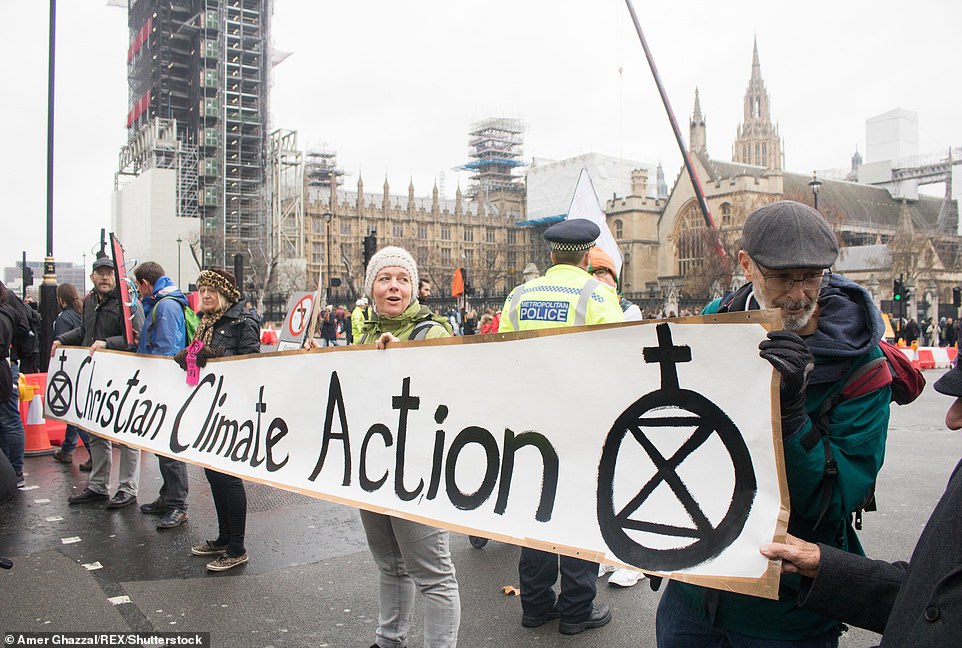 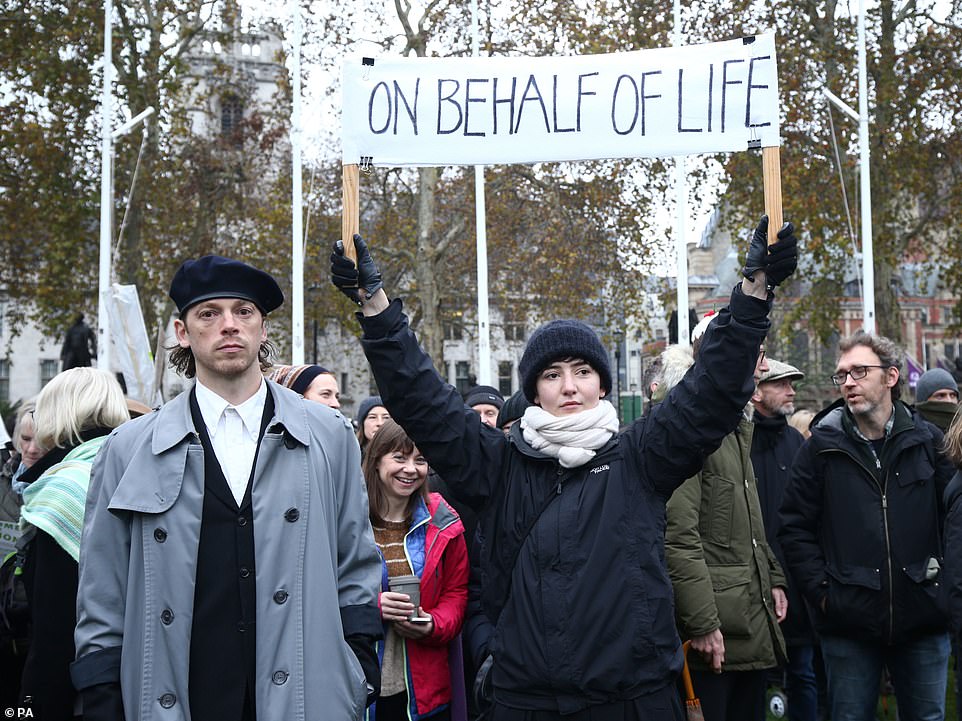 Protesters have gathered in Parliament Square in London. One held a sign which read ‘on behalf of life’, as they march for life lost through climate change

82 Supporters of the Extinction Rebellions were arrested last week following protests involving up to 6,000 people on five bridges across the Thames.

The majority of arrests were made on Waterloo Bridge and Blackfriars Bridge as police forced open routes to a major hospital.

Earlier this week protesters walked on to roads in Westminster, Tower Bridge, Elephant and Castle and Earl’s Court to block. 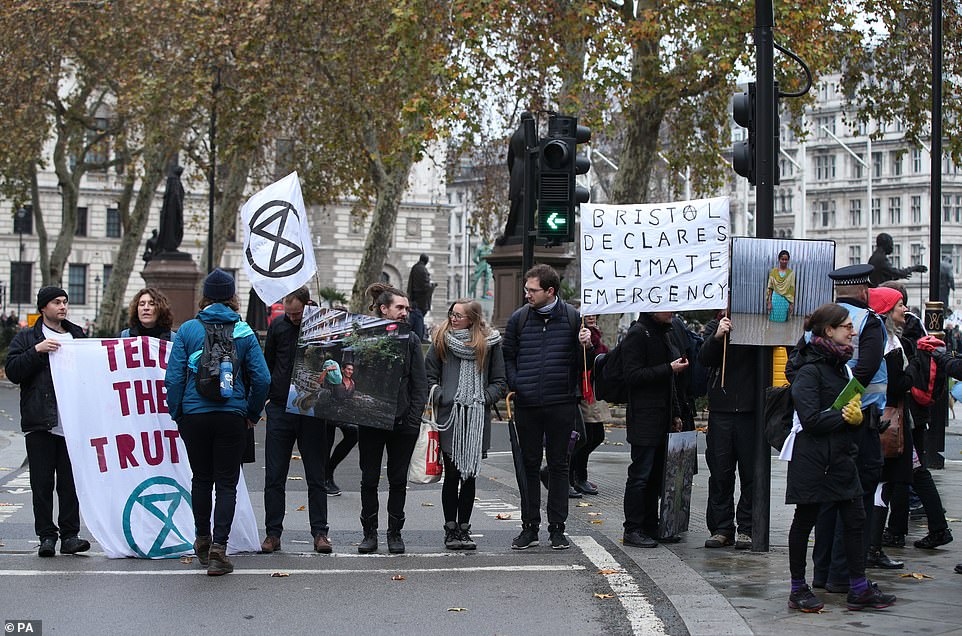 People from across the country had attended the protest with one sign reading: ‘Bristol declares climate emergency’ 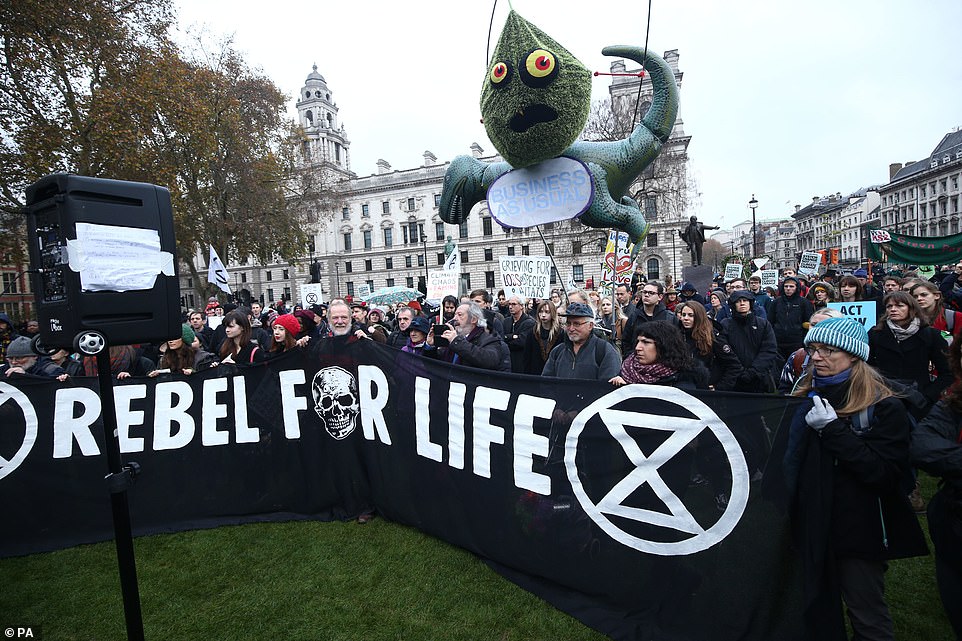 There were angry confrontations with some motorists attempting to force their way through temporary barricades.

One woman, who was walking to work, said bringing hundreds of vehicle to a standstill was creating extra pollution.

‘This is not the right thing to do,’ she said. ‘They are causing more pollution with all this standing traffic. I have got asthma and it’s ridiculous.’ Adam Khan, 21, from Enfield, who was caught up in Elephant and Castle on Wednesday, said: ‘They are just wasting people’s time. 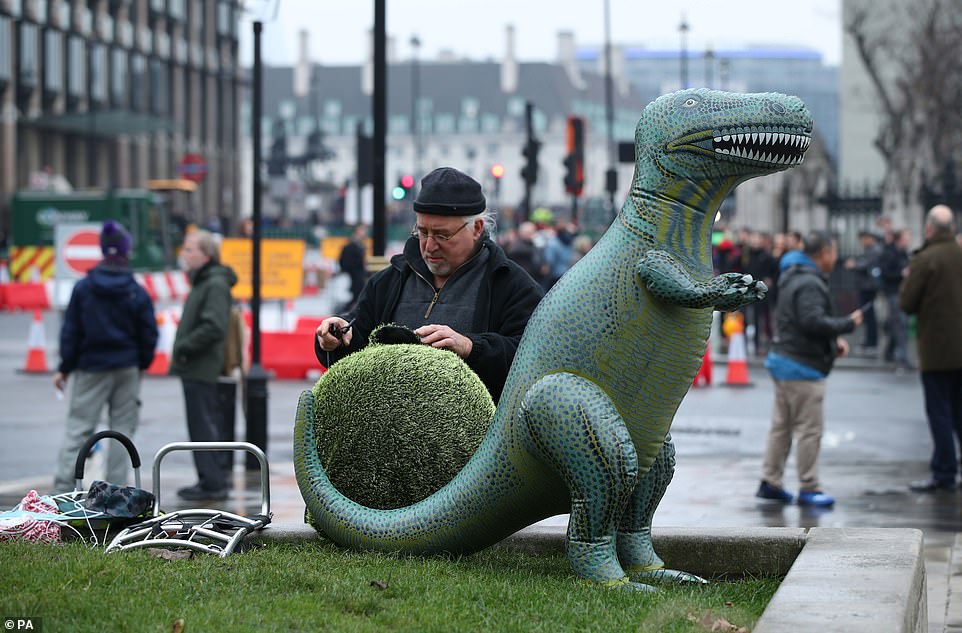 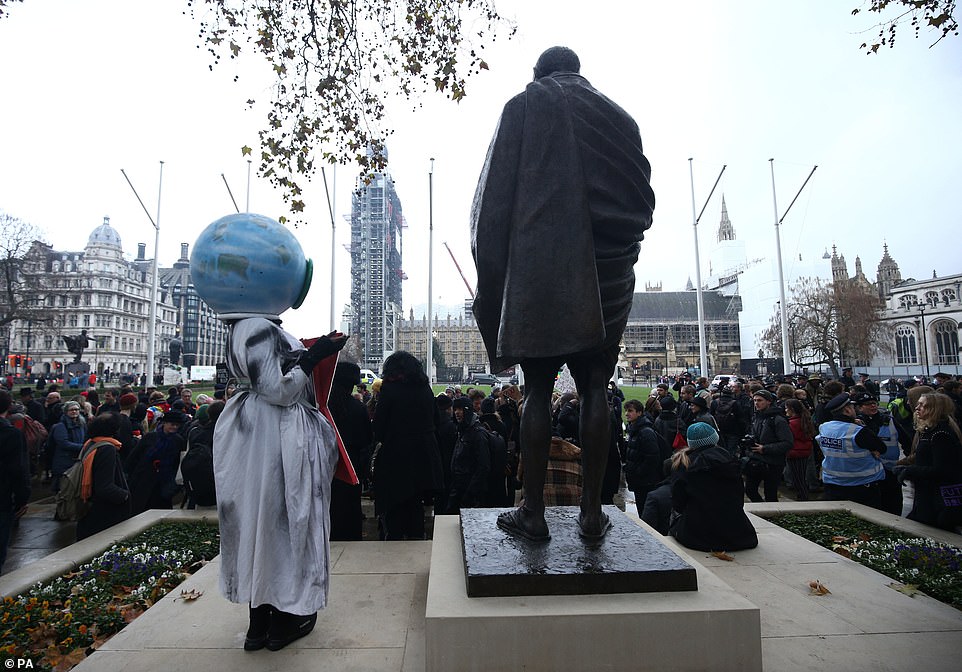 There was a big police presence at the scene at Parliament Square in London, but officers seemed to be chatting to the people in attendance 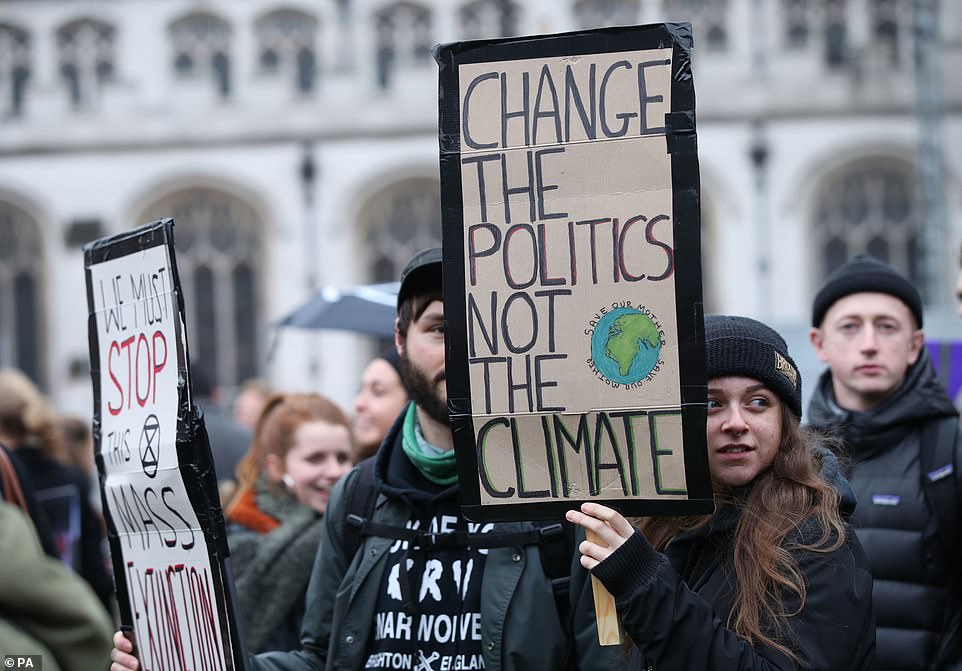 Protesters were out in full force and held signs that read: ‘We must stop this mass extinction’ and ‘change the politics not the climate’

‘I need to get home to drop my car off and I’m so late, hundreds of people are now.

‘If they want to protest they should do it outside number 10 Downing Street, not cause chaos for normal people like this. It’s bad enough trying to drive in London without this.’ Black cab driver Fokhul Miah, 35, said the protests made him late picking up his children from school in Essex.

He said: ‘I just need to pick my kids up, they’ll be crying and worried when I’m not there and there’s nothing I can do. 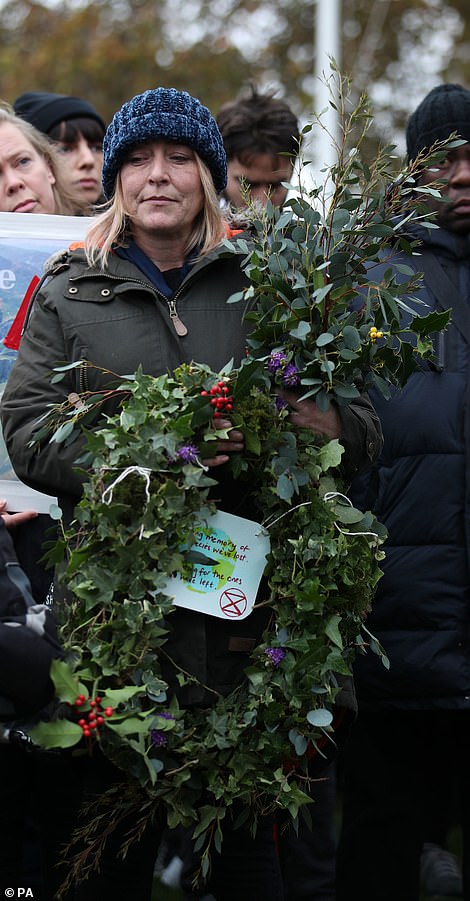 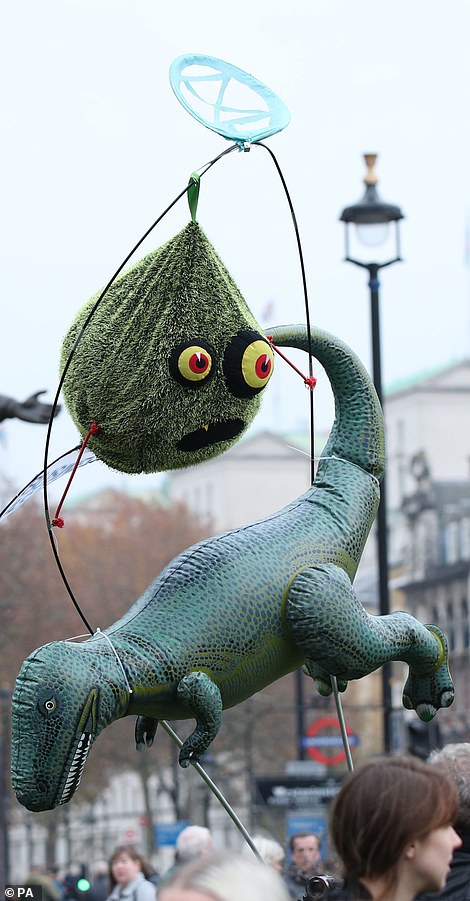 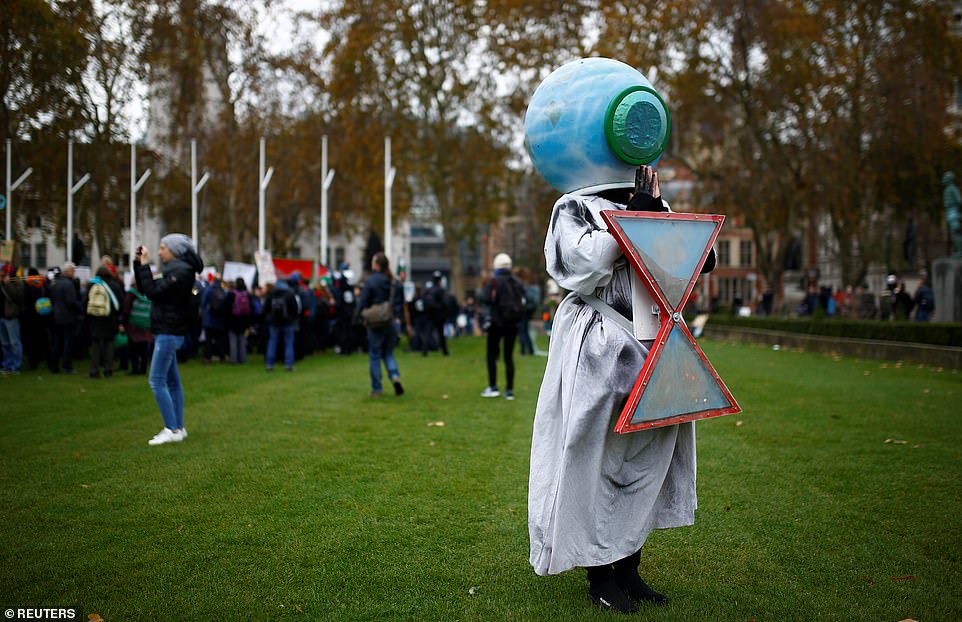 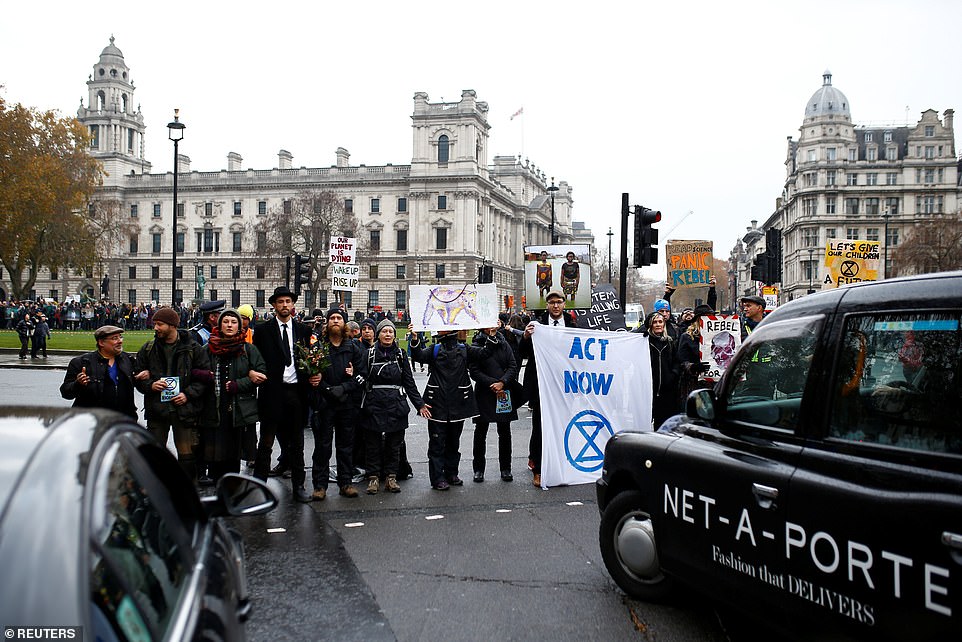 ‘I’d clocked off work to pick them up but I’ve been stuck here for ages. Protesting is fine but shouldn’t be at the inconvenience of half of London like this.’ The Extinction Rebellion protesters have been told to gather in Parliament Square at 10am before moving on to undisclosed locations.

Protest organiser Ronan McNern said: ‘This is about causing economic disruption by slowing things down, bringing things to a gridlock.’ Campaigner Clare Farrell said: ‘The 24th will be another mass participation, public protest and we think there’s a good chance there will be a bigger turnout.

‘We have demonstrated to the public that it is possible to take radical direct action in a mass participatory way, while being peaceful and non-violent.’ The Metropolitan Police tweeted: ‘If you do drive into London, please note attempting to drive through protesters in the road is very dangerous and illegal.’ Transport for London said the protests have caused serious disruption to buses and other traffic.

‘Sorry for the hassle, but our planet is at stake’: Bush craft instructor behind ‘swarming’ climate change protests bringing gridlock chaos to the capital 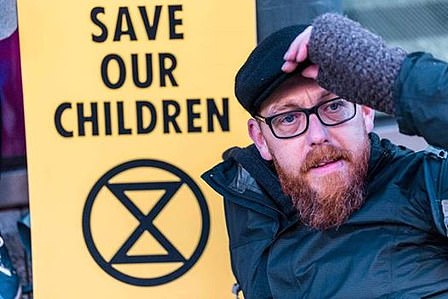 A bush craft instructor is one of the three leaders behind the ‘swarming’ environmental protests currently targeting London traffic hotspots with human roadblocks causing misery for motorists.

Former builder Simon Bramwell, 46, says he ‘apologies for the inconvenience caused but the future of our planet is at stake’.

Simon said he joined forces with Gail Bradbrook and Roger Callum to form Rising Up in a café two years ago – with their movement Extinction Rebellion now attracting thousands.

The leaders were inspired to take more direct action by the failure to stop the expansion of Heathrow Airport and by the bulldozing of Bristol’s Stapleton Road allotments, with particularly fertile land, for a bus station despite local protests.

Speaking to Mail Online, he says ‘hearing less birds in our beautiful countryside’ – where he goes off the grid for up to 19 days at a time, sometimes in the most challenging of natural environments – convinced him that he had to help form a ‘punchier’ environmental movement where they were all willing to be arrested to be heard instead of just ‘playing it safe’ and failing to get their message across.

He said: ‘Absolute apologies for the inconvenience we’ve caused to motorists – but the future of our planet is at stake.

‘When I’m out enjoying what remains of our beautiful countryside, I hear less and less birds now. So three of us had a meeting in a cafe a couple of years ago where we decided that groups like Greenpeace were playing it safe and were failing to get their message across. Meanwhile we’re all sleepwalking into an abyss while all our politicians can talk about is Brexit.’