Campaigners have accused Adidas of ‘cropping out’ a black model who appears in their latest body positivity campaign.

The ‘original’ image was shared after it appeared in an article about the new range.

It was then compared with the photo on the Adidas website, which features four out of the five models pictured in the other shot.

Now critics have accused the company of ‘colourism’ for apparently removing the black model from shots on their site.

One image on the website has four of the models together. Another image has five, including a black model who is not pictured here 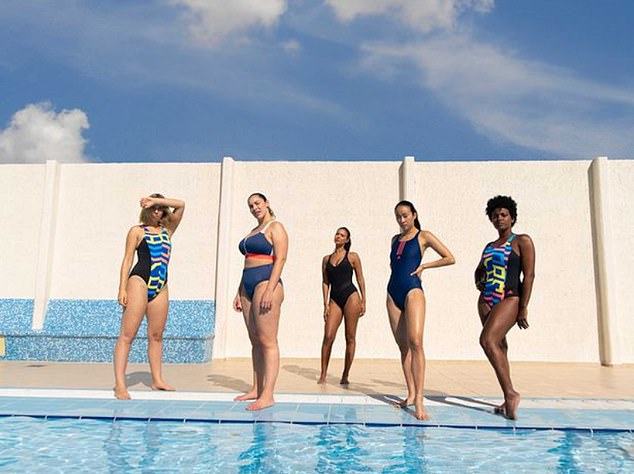 Another image has all five models together. The cropping of the model on the right has caused consternation on social media

Among those to complain was lawyer and activist Dr Shola Mos-Shogbamimu.

She retweeted a since deleted tweet making a comparison between the two images on Saturday [27 Jun] saying: ‘Jeez! Adidas, why is the black model cropped out and not referred to at all?

‘There’s some serious ‘colourism’ going on here. This so called body positivity campaign is dead on arrival.

‘Bet you did the ‘performative activism’ for £BlackLivesMatter too.’

The author of the original tweet, @lifeojam- originally shared the photos saying: ‘Nah Adidas you need to cancel this whole campaign and read the room.’

One user replied saying: ‘In a twisted way, I think they read the room just fine. They hate us, but black rage is sweet.’

Twitter user Denzil Safo also tweeted, saying: ‘So Adidas post this [Black Lives Matter image] on social media and then crop out the black model from the June 2020 campaign? Come on, do better.’

@MissBleuFour said: ‘She should never have been on the end to begin with. Makes it too easy to erase her. Damn I’m tired of this.’

The swimwear campaign, which features presenter Maya Jama as its face, has already been mired in controversy for using ‘conventionally attractive’ models to advertise the ‘body positive’ range.