A gym in south-western Sydney has been forced to close after one of its members tested positive to COVID-19.

The Plus Fitness 24/7 in Campbelltown announced overnight it was closing temporarily following a request by the Department of Health.

The gym will carry out a deep clean and expects to reopen later on Friday.

‘If you attended the gym on July 11 between 9am and 10am the Department of Health will be contacting you directly,’ the gym said in a statement.

The further infection follows seven new COVID-19 cases in NSW being linked to a south-west Sydney pub cluster confirmed, bringing the total of associated cases to at least 40.

Three of the six cases are connected to the Crossroads Hotel in Casula, which an infected Melbourne man attended on July 3, and the other three are of unknown origin. 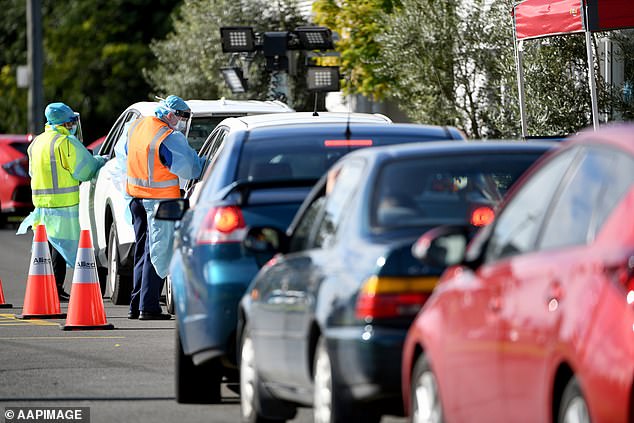 New South Wales Health workers dressed in Personal Protective Equipment administering COVID-19 tests in Sydney on Thursday. A gym has been forced to close in the city’s south-west after a member tested positive to the virus 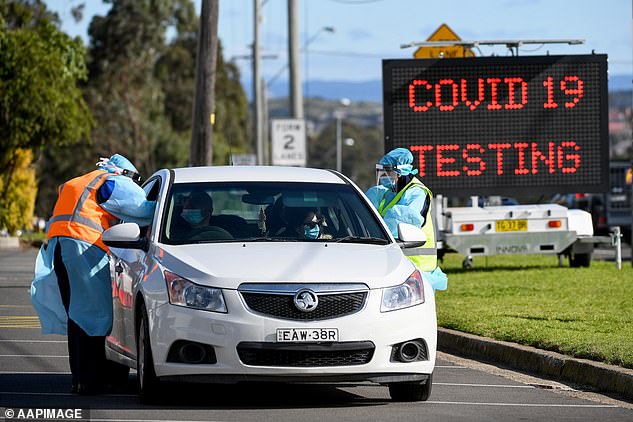 Pictured: Health workers conduct testing at a drive-through COVID-19 clinic at the Crossroads Hotel at Casula in Sydney’s south-west

At least 21 of the 40-plus cases in the cluster were hotel patrons.

NSW Chief Health Officer Kerry Chant said another case confirmed after 8pm on Wednesday involved a NSW man who on July 12 returned to Ballina from Melbourne on Jetstar flight JQ466, with passengers on that flight being contact traced.