Can Brazil cope at the Copa America on home soil without Neymar?

Football’s 21st century answer to the Truman Show had reached fever pitch long before its main star, Paris Saint-Germain and Brazil forward Neymar, was brought off injured in a 2-0 friendly win over Qatar last week and subsequently ruled out of his country’s home Copa America the following morning.

Over a whirlwind 11 days since arriving at the national team’s Granja Comary training base in Rio de Janeiro state on May 25 – his choice of vehicle a private $15million (£11.8m) Mercedes Benz helicopter raising eyebrows from the offset – things went from bad to worse for the world’s most expensive player as he was stripped of the captain’s armband, felt pain in his left knee yet returned to training, was accused of rape and ruptured ligaments in his ankle.

Albeit against admittedly weaker opposition on Sunday, the Selecao romped to a 7-0 win over Honduras in the southern city of Porto Alegre – where they will contest the quarter-finals providing they win a group also containing Bolivia, Peru and Venezuela – and have thus far shown no signs of struggle in his absence.

Brazil, pictured in training on Thursday, open the Copa America on home soil on Friday night 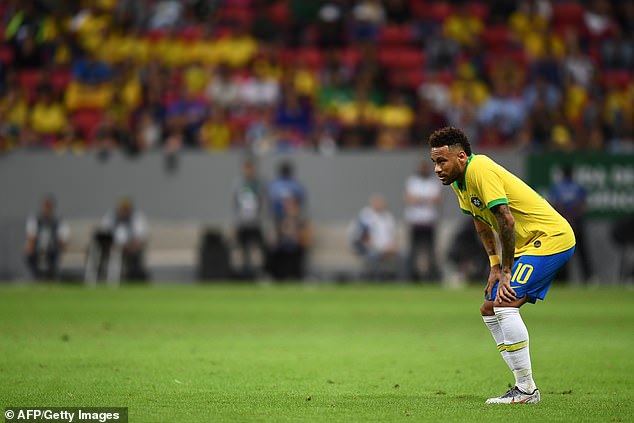 Armed with a deeply-talented squad able to dispense with talents such as Fabinho, Lucas Moura, Vinicius Jr and Marcelo, manager Tite’s men were already coasting before Romell Quioto lunged on Barcelona’s Arthur round the half hour mark.

That allowed Napoli powerhouse Allan to come on on to fill the gap in midfield and string plays together more than adequately.

Up top, Brazil likewise boast no end of options as it is here where a string of skillful young forwards are capable of manning either flank with Gabriel Jesus or Roberto Firmino slightly in front of them as a striker.

Everton’s Richarlison locked down the right wing with five goals in 10 caps but it is the opposite left, where Neymar usually occupies, that has been up for grabs but may have now been filled.

A breakthrough star for Ajax in the 2018-19 campaign, as Erik ten Hag’s overachievers became double-Dutch champions and reached the semi-finals of the Champions League, David Neres has endeared himself to Tite, who has apparently told the 22-year-old to ‘play as you do for your club and everything will be fine.’ 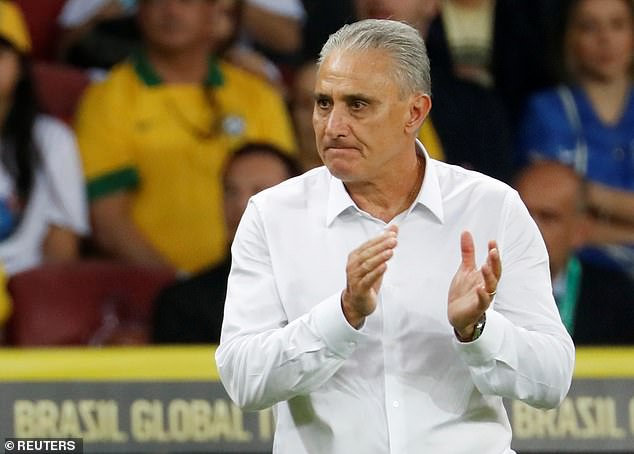 Scoring his first goal in the iconic yellow and green jersey at the weekend, the end result of a fine solo run finished with a delightful chip over the goalkeeper, Neres is guaranteed to start on Friday night for Brazil’s opener against Bolivia at the Morumbi, where the Sao Paulo academy product’s career began as did those of team-mates Ederson, Casemiro and Miranda.

Even in the event of an unlikely failure to live up to the demands of the task in hand, the chance will consequently be offered to the likes of Manchester United target Everton of Gremio or former Flamengo starlet and attacking midfielder Lucas Paqueta, now at AC Milan.

So what of Philippe Coutinho, then, whom Tite has often played wide and left since World Cup quarter-final failure at the hands of Belgium in Kazan?

Thankfully, the charismatic ex-Corinthians coach has learned from Ernesto Valverde’s mistakes with both he and his charge currently being rewarded by the decision to appoint the player more centrally.

Awarded the ‘Craque do Jogo’ prize by national broadcasting giant Globo in his last two outings, the scapegoat for all that has been wrong at the Camp Nou in recent months is revitalised while tipped to step up as the main attraction for his country. 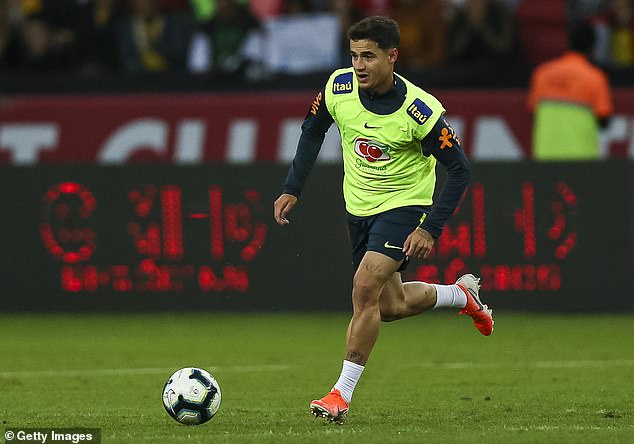 ‘After a below expectations season at Barcelona and a drop in efficiency for the Selecao after the 2018 World Cup, Coutinho has returned to standing out’, concluded reporters from UOL, among his country’s most respected media outlets, at the weekend. LANCE! A daily sports newspaper echoed this by suggesting that Coutinho has ‘filled Neymar’s role in creation.’

While some corners have concluded that Brazil are in fact ‘better’ when missing their injured superstar and the distractions he brings with him, or at least able to play more freely in a likely 4-2-3-1 as opposed to the usual 4-1-4-1, not everyone agrees, including respected O Globo journalist Martín Fernandez.

‘Brazil loses something without him on the field. He’s one of the best players in the world’ Fernandez told Sportsmail.

‘But his absence brings a bit of peace to the coach and the team’s environment. Due to injuries and suspensions, which are frequent in his career, Tite needs to think about a team without him and the Copa America is a good chance to do this.’

When the lights go up on a 67,000 capacity crowd in São Paulo this evening, the world will find out just how well a Neymar-less Brazil moves forward. Though the pressure of his mere presence alone will be lifted, a different one will replace it – that of being charged with delivering a first major trophy in 12 years to South America’s largest country.