Can I store my solar power and use it later so it doesn’t go to waste?

Solar panels are a popular option for those looking to become more environmentally-friendly and save money on their energy bills in the long run.

However, many have been put off purchasing them – not only because they can be a costly investment, but also because they worry they will not make the most of the solar power provided.

Often, electricity generated by the panels can go to waste as the most energy is produced during the day when there is more sun. In normal times, this is when most people are at work and not using appliances.

In fact, two thirds of the world’s energy is wasted somewhere between generation and usage.

But there is a solution, in the form of batteries that store solar power and keep it so consumers can use it later.

A number of companies have now designed these batteries, which can be attached to the home.

This means energy generated from the sun can be used outside of daylight hours, reducing a home’s reliance on the grid and making it more environmentally friendly.

Jonathan Maxwell of Sustainable Development Capital, an investment management firm which specialises in environmental infrastructure, said his firm is working on a number of projects where such batteries are used.

He said: ‘Over the last two to three years it has become possible to buy solar power generated on rooftops for the same price or cheaper than from the grid – even in a less sunny country like the UK.

‘The power goes straight to the point of use and, paired with battery energy storage, can even be stored for when it is most needed, or at the times of day when buying from the grid is most expensive.

‘This has changed the game for many businesses and is a huge opportunity to reduce the carbon emissions cost effectively in homes’.

This is Money takes a look at which firms are offering batteries that store solar power, how much it costs and whether it could be a viable option for your home. 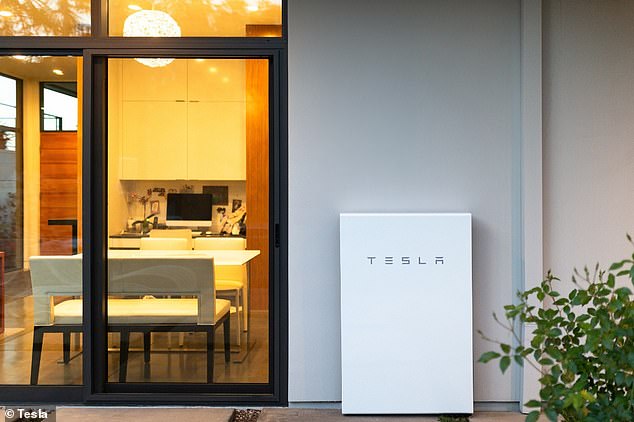 A Powerwall for home usage costs £8,700, which includes £1,400 for supporting hardware

Tesla’s Powerwall is one of the most well-known devices, but several other UK energy suppliers also offer similar batteries including Eon and EDF.

British Gas, however, said it was not something it currently provides.

Powerwall is a rechargeable home battery that lets you store solar energy generated during the day and use it to power your home at night, helping create a self-powered home.

It also gives households the ability to use solar power when there is a power outage, and can be used to charge an electric vehicle.

Other benefits include being able to use the Tesla app to monitor a home’s energy production and consumption in real time, as well as controlling usage.

If your energy costs vary, or if you are on a time-of-use rate plan, Powerwall can also take that into account to maximise your savings. When electricity is expensive, Powerwall uses stored low-cost energy to power your home.

The Powerwall can be placed inside or outside the home, as well as being floor or wall-mounted.

For those interested in making money by selling their unused energy back to the Grid, Tesla said customers can use a feed in tariff – but the returns are less than they used to be, so you would likely save more money by filling up your Powerwall and using at peak times.

Cost: One Powerwall for home usage costs £8,700, which includes £1,400 for supporting hardware. Currently the devices are only available to reserve online. 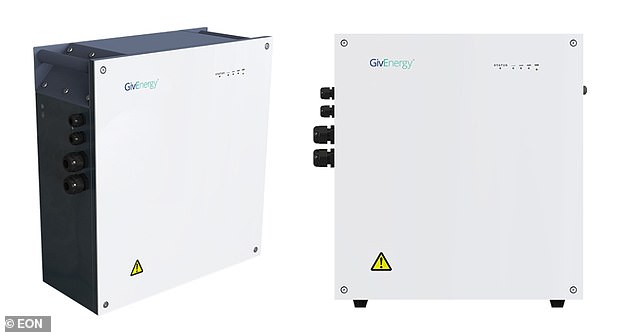 Eon’s batteries can be bought for £2,574 if a customer also has solar panels through the firm

Eon is one of the UK’s energy suppliers that offers solar batteries.

To have one fitted, the provider said one of the firms solar experts would have an initial consultation with a customer where they would discuss details to understand what it is they are looking for and give the customer more detail about the exact costs.

It currently offers four sizes of batteries depending on what size and type of solar panel system a customer chooses for their home and how much storage capacity they require.

The supplier offers solar panels only, solar and battery storage as a package, or battery retrofit for someone who already has panels but would like to add a battery.

Cost: Consumers can add a solar battery to their system from only £2,574.

However, costs vary depending on customers’ demands and requirements.

There is also a range of flexible payment options. 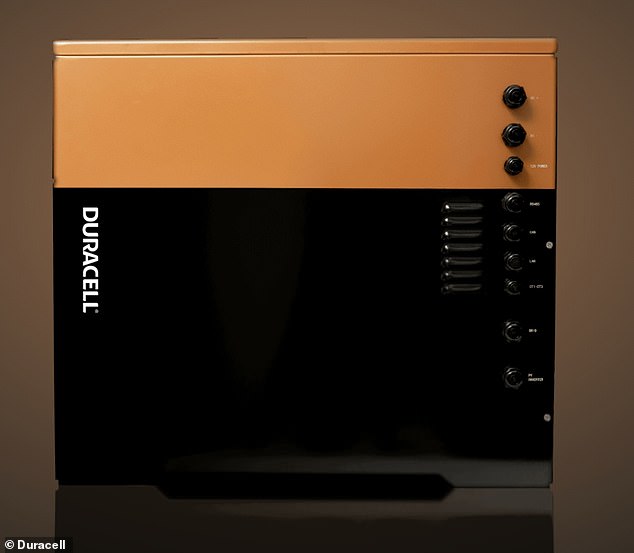 EDF, through its partnership with Powervault, is offering what it says is ‘one of the most advanced and cost-effective home battery systems on the market’.

Powervault is compatible with any solar photovoltaic system, and customers can choose to purchase Powervault 3 from EDF with or without the EDF grid services.

Those who add grid services through EDF will be allowing the energy stored in their Powervault 3 battery to form part of a network of small, domestic batteries across the country, which can be used to help balance the grid.

Powervault said customers who have installed a Powervault 3 to store solar energy can expect to save up to 50 per cent on their energy bills.

This saving is even higher for customers on time of use tariffs, which draw electricity from the grid when it is cheaper to store for later use.

Different from many of the others, it is one of the only batteries where customers can sell excess energy back to the Grid, making them money.

Customers can also monitor electricity generation and storage via an app.

Duracell says the system is small and lightweight, which makes for easy installation and maintenance.

Cost: The Bank costs £4,499, according to Which?, excluding the price of installation.

There are a number of other firms offering similar solar batteries for varying prices – ranging from £2,000 to £10,000, depending on the size of the battery needed for your home.

However, whether splashing out on a battery is worth it for you will depend on a number of factors.

If you have an existing small solar panel system, with little excess to go into a battery or other storage options, it’s not likely to make financial sense, according to the Energy Saving Trust.

On the other hand, if you have installed a large number of panels on your roof and there’s generally no-one around during the day using the electricity generated, it may be well worth considering your storage options.

Prices of storage batteries are likely to go down in the next couple of years, according to the EST, so it may also be worth biding your time.