Can you meet your parents or not? Confusion after Raab tied himself in knots

Can you meet your parents or not? Even Tory MPs don’t know the answer as confusion reigns after Raab tied himself in knots and No 10 had to correct him

Dominic Raab tied himself in knots this morning as he tried to clarify if the public are allowed to see their parents or not.

The Foreign Secretary took part in a shambolic series of media interviews this morning where he gave lockdown advice that conflicted with what the Prime Minister said in his speech last night.

The public is understandably keen to meet with loved ones after seven weeks of lockdown, but rules on this were not made clear by Boris Johnson.

In a chaotic interview on Good Morning Britain this morning, Piers Morgan asked MP Andrew Brigden if he was allowed to go and see his sons he hadn’t seen in weeks.

Mr Brigden said he could, despite that being against the rules, prompting Piers to say to him: ‘you haven’t got a clue.’

In the Foreign Secretary’s first interview of the day on Sky News he said the rules did not allow people to visit family members.

But later on BBC Breakfast Mr Raab was asked if someone could meet their mother in the morning and their father in the afternoon, he said: ‘Outside in the outdoors, staying two metres apart, yes.’

Then when asked later on BBC Radio 4 if someone could meet up with both their parents in a park, Mr Raab said: ‘Well, you could if they are two metres apart.’

The UK government put out a clarification saying people can only meet one person outside at a time. 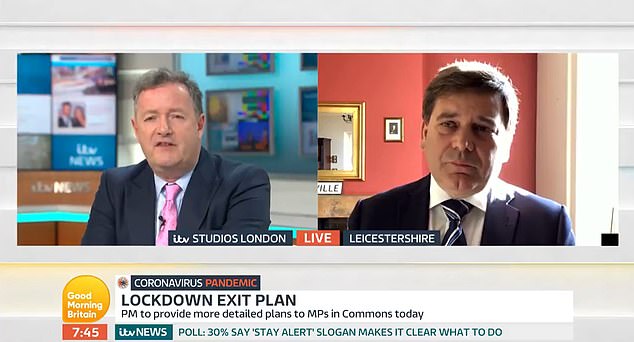 In a chaotic interview on Good Morning Britain this morning, Piers Morgan asked Andrew Brigden if he was allowed to go and see his sons he hadn’t seen in weeks

You can not meet two people, such as both parents, at the same time.

The shambolic mixed messages drew the ire of Piers Morgan on Good Morning Britain who said the whole episode was a ‘total disgrace’.

He said: ‘Now they are having to apologise, the government, and clarify that Dominic Raab who had just told tens of millions of people to go and see their parents at the same time, now apparently you can’t.

‘What a total disgrace. How many people will now be infected because they only heard him on the Today programme and go off and see their parents?

‘And maybe kill them? Do they not understand how dangerous this is? How serious it is? It’s a total shambles.’

The confusing messages have just added to the uncertainty after the Prime Minister’s address last night.

Mr Raab also urged people to go back to work from Wednesday if they cannot work from home.

‘If you can work from home, you should continue to do so, but there are nine sectors of the economy like manufacturing and construction, where people can’t do their job from home,’ he said.

‘So we’re saying to them they should now from Wednesday, go back to work.’

Sir Keir told LBC the position had obviously shifted. ‘I accept that for some things, like when can a school open, that’s going to be conditional, but on this business of going back to work, the suggestion was last night that people go back to work today if they can’t work at home, but don’t use public transport – and that’s really difficult, particularly if you’re in a city like London – and without guidelines in place as to how work places need to operate.

‘You know, simple things like how do you keep people two metres apart? What about sanitation, protective equipment?

‘These are things that were discussed in a consultation document last weekend but not resolved yet.

‘I was actually quite surprised the prime minister said, effectively in 12 hours’ time, start going back to work without those bits in place.

‘We needed that clarity and it is unravelling a bit this morning because I think the foreign secretary has now said, ”Well, go back to work doesn’t really mean until Wednesday”, so suddenly it has shifted.’