Can you spot all the ‘Easter eggs’ hiding inside NASA’s Orion capsule?

NASA has created a puzzle that is out of this world to celebrate the return of Orion this weekend.

The American space agency shared a picture of the interior of its Orion spacecraft this week that is filled with an undisclosed number of Easter eggs which contain hidden meanings.

Nasa has challenged the public to de-code all the secret messages before it reveals the results on Saturday – a day before Orion returns to Earth.

Twitter users have stepped up to the challenge, sharing what they believe are symbols, numbers and pictures intricately placed inside the I craft.

Some guesses include a red bird-like symbol, a Snoopy soft toy and a yellow label with the letters CBAGF, thought to be the first five notes of Frank Sinatra’s song ‘Fly Me To The Moon.’

Orion is currently on a trajectory home after a successful 1.3-million-mile journey to the moon and back that saw it fly the furthest any spacecraft designed to carry humans has ever traveled.

Orion is just 48 hours from home, but a lot could still go wrong before it splashes down in the Pacific Ocean.

While the mission aimed to test the capsule in space, the splashdown is described as ‘priority one’ because engineers want to see proof that the spacecraft can survive the heat of re-entry into Earth’s atmosphere before humans can travel in it.

The capsule must withstand searing temperatures of 5,000 degrees Fahrenheit  — half as hot as the sun’s surface — and slow down from speeds of 24,500mph.

Until then, NASA is challenging the public to solve puzzles intricately placed inside Orion.

Located on the side adjacent Commander Moonikin Campos, a sensor-packed mannequin, is an image of a red bird. 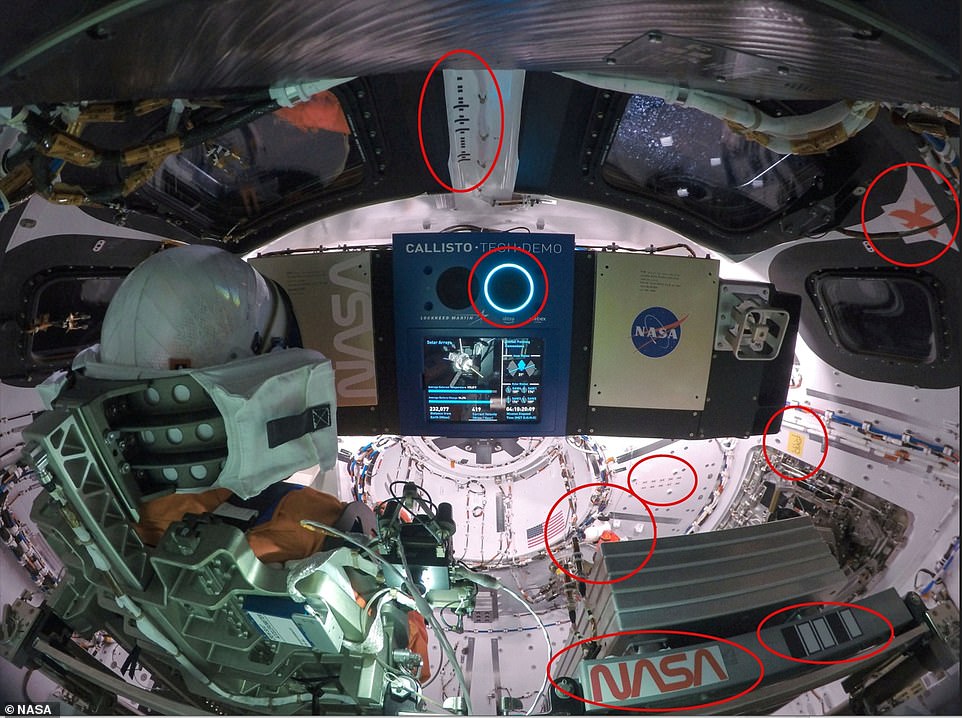 NASA will provide the answers on Saturday, a day before the spacecraft is scheduled to return to earth

It could be an eagle, a reference to the Eagle, the Lunar Module that took Neil Armstrong and Buzz Aldrin to the Moon’s surface.

The other mean might also hint at the Phoenix Mars Lander, which landed on Mars on May 25, 2008, reports SWS.

Morse code that translates to Charlie, likely associated with the Snoopy soft toy used as the zero-gravity indicator, is hanging on the cabin’s roof.

The capsule launched atop a Saturn V rocket with three astronauts.

As the Apollo 10 crew walked along the corridor to the launch pad, mission commander Thomas P. Stafford pats the nose of Snoopy, the mission’s mascot, held by Jamye Flowers, astronaut Gordon Coopers’ secretary.

Another Easter egg spotted is the retro logotype known as the ‘worm’ or ‘the meatball.’

And along the front panel are several numbers.

Twitter is stumped on the numbers, but some speculate they are coordinates.

Orion features the so-called ‘Callisto payload,’ a technology demonstration of voice-activated audio and video technology from Lockheed Martin in collaboration with Amazon and Cisco.

The blue circle may reference the HAL 9000 computer from the 1968 film 2001: A Space Odyssey, although that had a red light in a circle.

One of the last guesses involves a black and white pattern on a panel.

One online users thought it was binary code: ‘Binary 10010 to decimal is 18. The 18 Artemis astronauts?’ while another said they ‘look like piano keys, could be the music notes used in Close Encounters?’

Before setting on a path home, Orion performed its longest engine burn last week, bringing it within 79 miles of the lunar surface – the closest flyby of the Artemis I mission.

The capsule expectantly lost communication with the Artemis ground team for 31 minutes and performed its second engine burn lasted for 207 seconds. 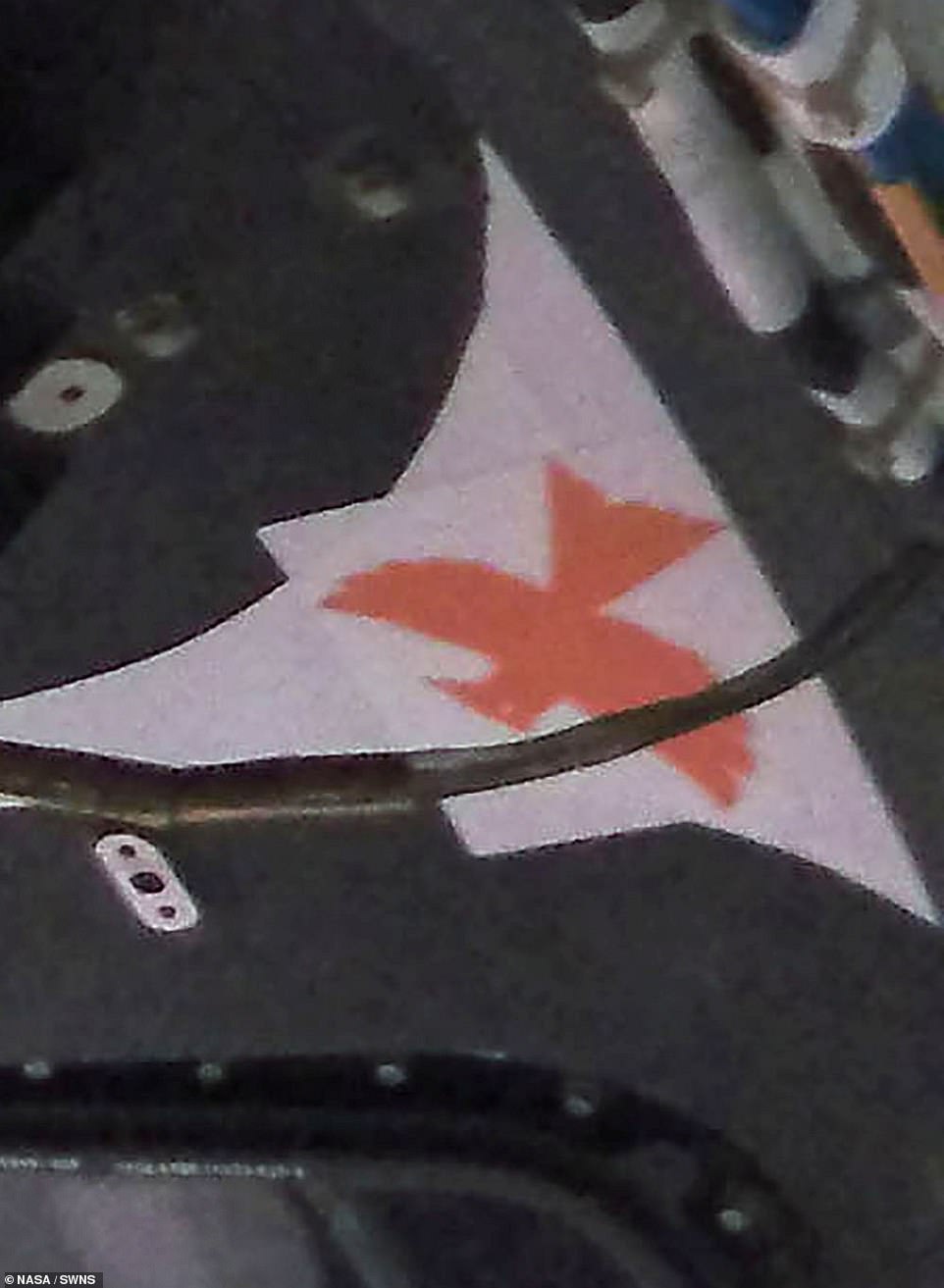 Located on the side adjacent Commander Moonikin Campos, a sensor-packed mannequin, is an image of a red bird 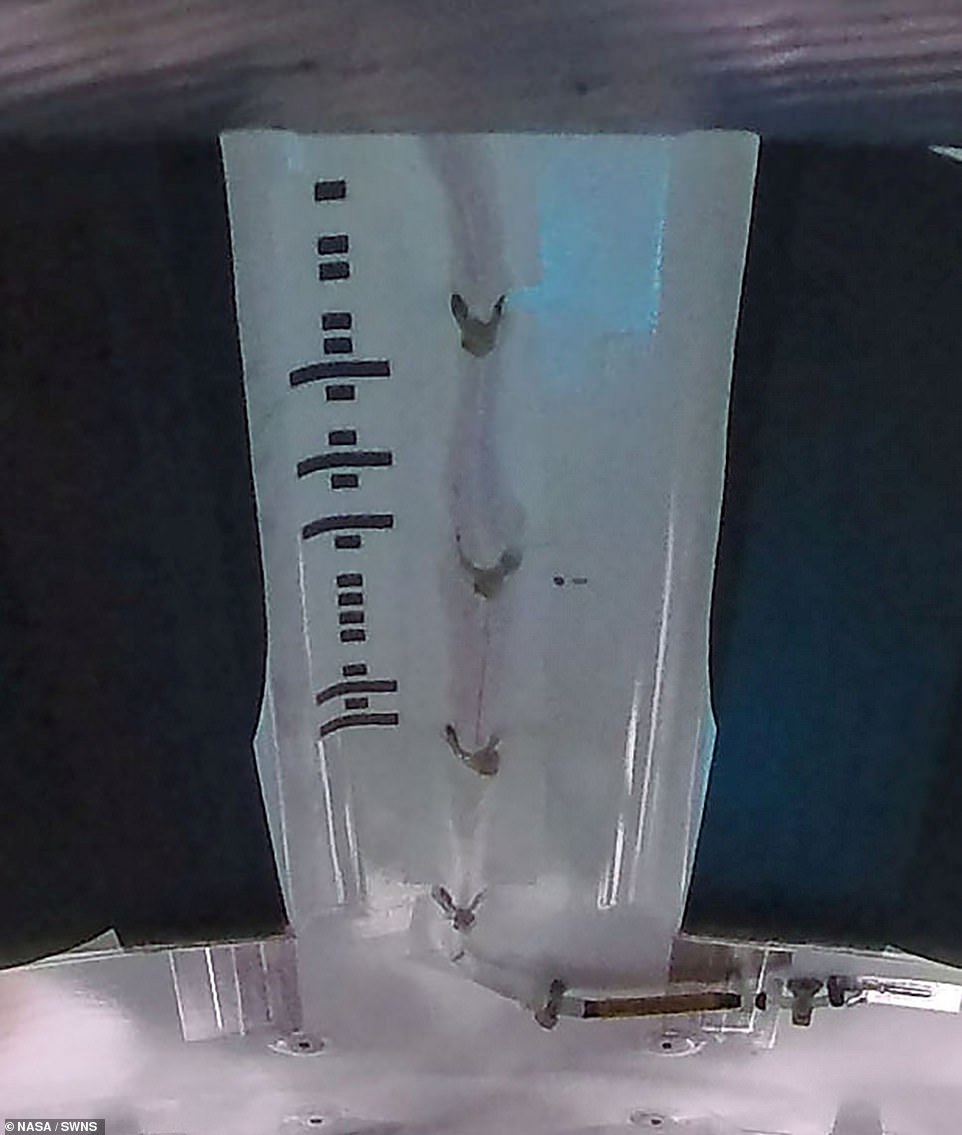 Morse code that translates to Charlie, likely associated with the Snoopy soft toy used as the zero-gravity indicator, is hanging on the cabin’s roof

The Artemis ground team waited patiently during the communication loss, hoping the burn was activated at 11:43 am and lasted for the scheduled three minutes and 27 seconds.

Orion linked back with its team at 12:14 pm ET, confirming that the burn was as expected and is now on a return trajectory to Earth.

‘For Orion, this is not goodbye to the moon, but a see you later,’ the NASA livestream said, referring to the notion that the capsule will take the same journey during the crewed Artemis II mission.

Named after the twin sister of Apollo in Greek mythology, Artemis signifies the modern incarnation of the US space agency’s Apollo program, which sent astronauts to the moon for the first time. 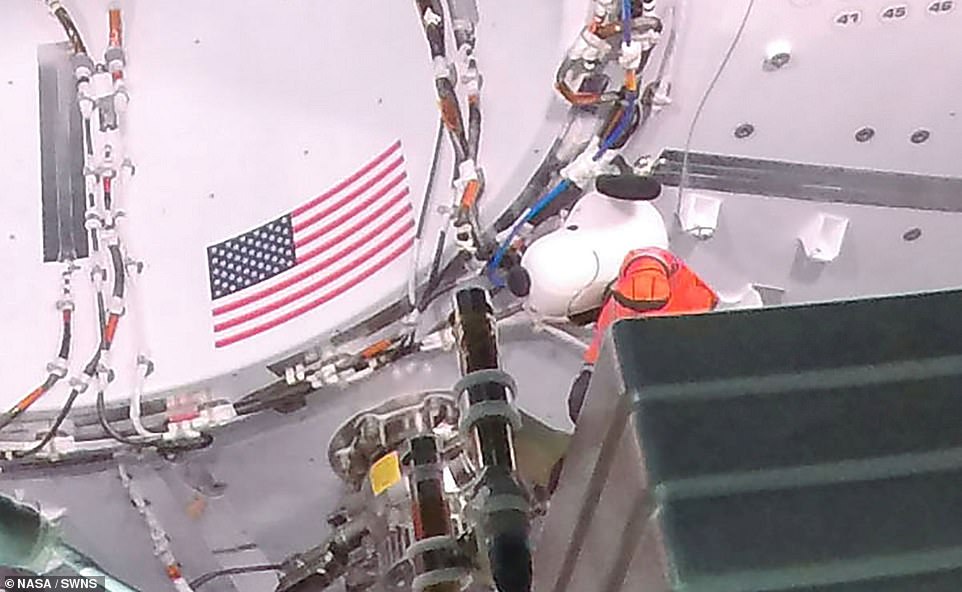 The public spotted a toy Snoopy, which Artemis I used for its zero-gravity indicator 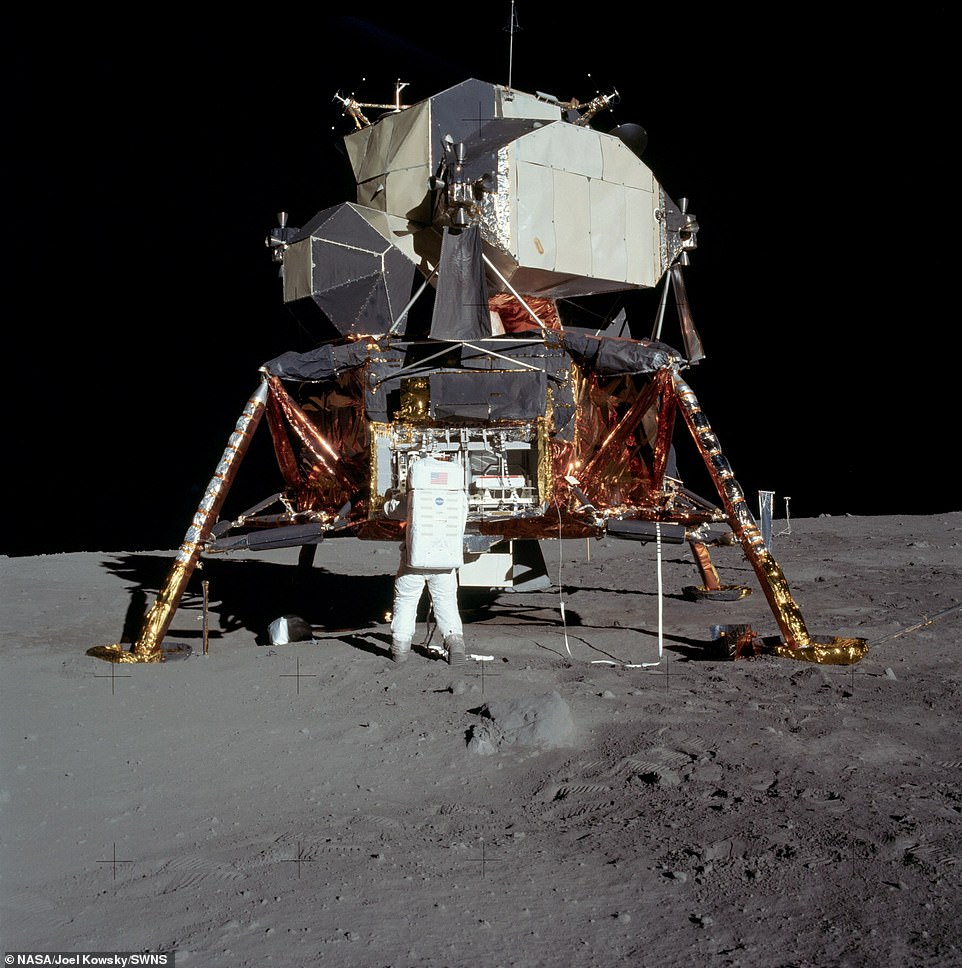 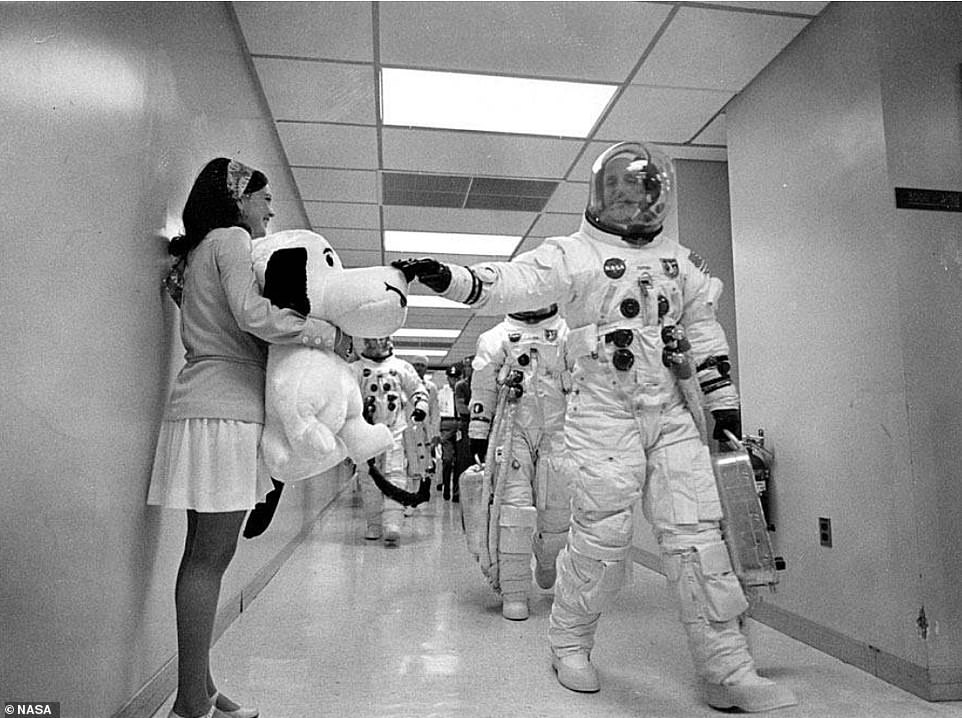 As the Apollo 10 crew walked along the corridor to the launch pad, mission commander Thomas P. Stafford pats the nose of Snoopy, which was the crew’s mascot

This mission has no humans on board, but if everything goes smoothly and the Orion capsule splashes down to Earth as planned, the hope is that a four-person crew can make a trip around the moon in two years.

Instead of humans, a trio of human-sized test dummies is standing in for the crew in the Orion capsule, their bodies swarming with sensors to measure radiation and vibration.

In the commander’s seat is Commander Moonikin Campos — a tribute to electrical engineer Arturo Campos, who played a crucial role in getting the troubled Apollo 13 mission safely back to Earth in 1970.

Clad in a new Orion Crew Survival System spacesuit, the mannequin provides NASA scientists with essential data on what humans experience during a trip to the moon. 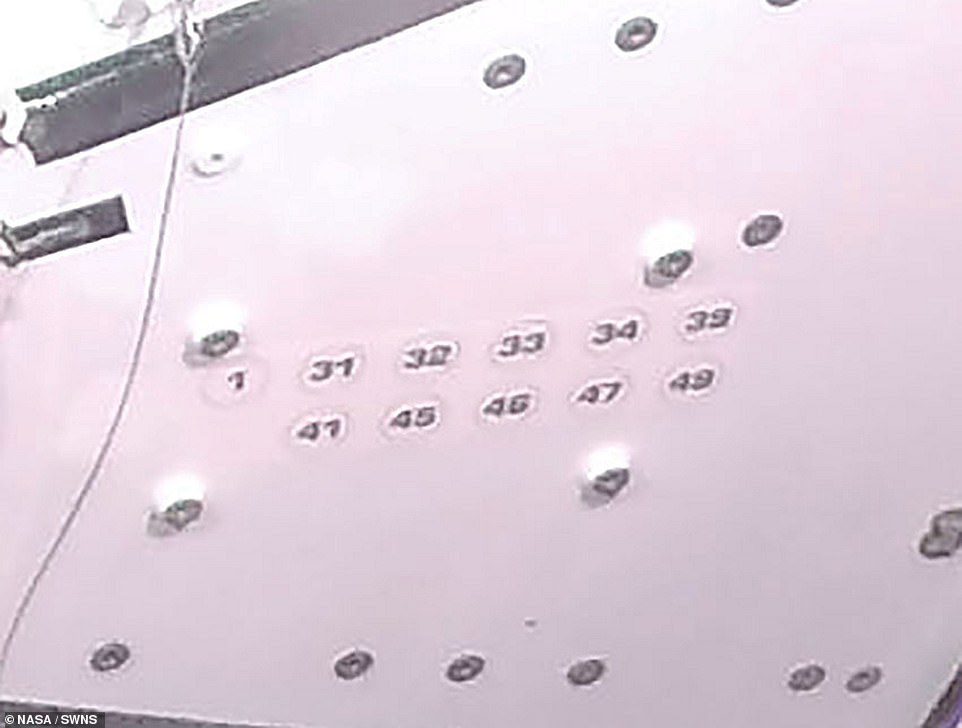 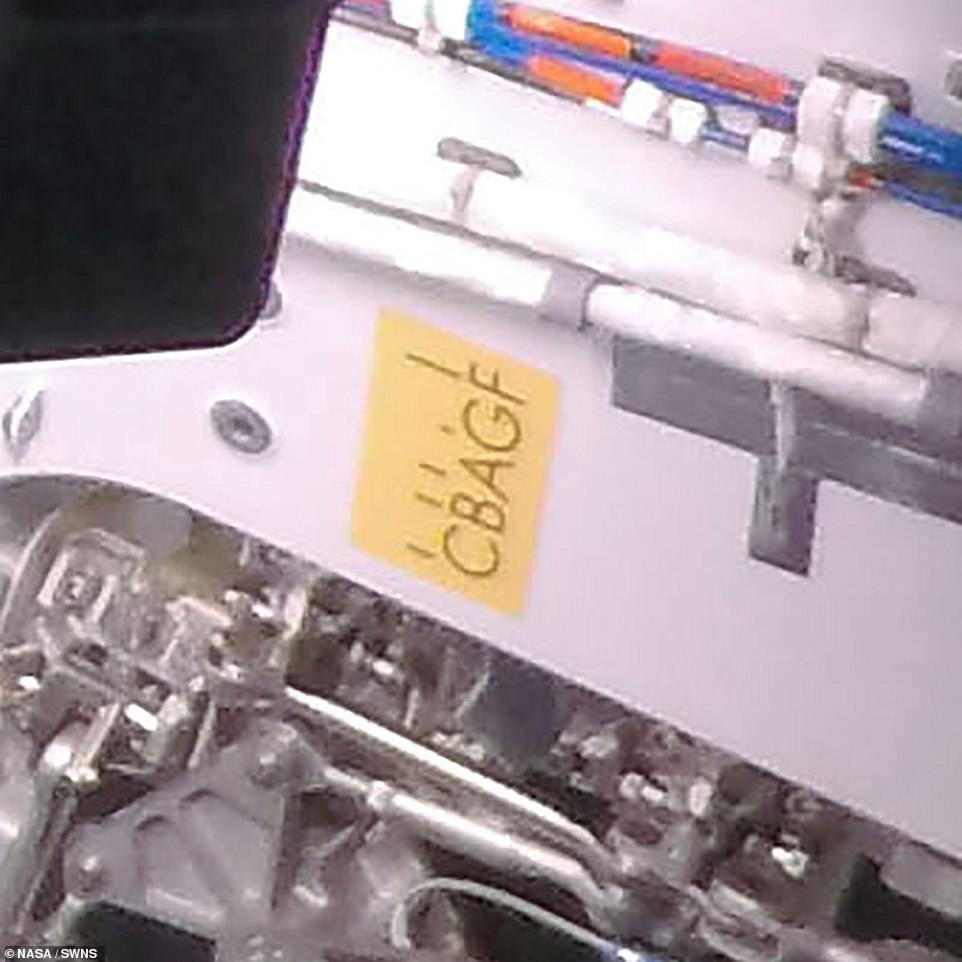 A yellow label with the letters CBAGF, thought to be the first five notes of the song “Fly Me To The Moon” 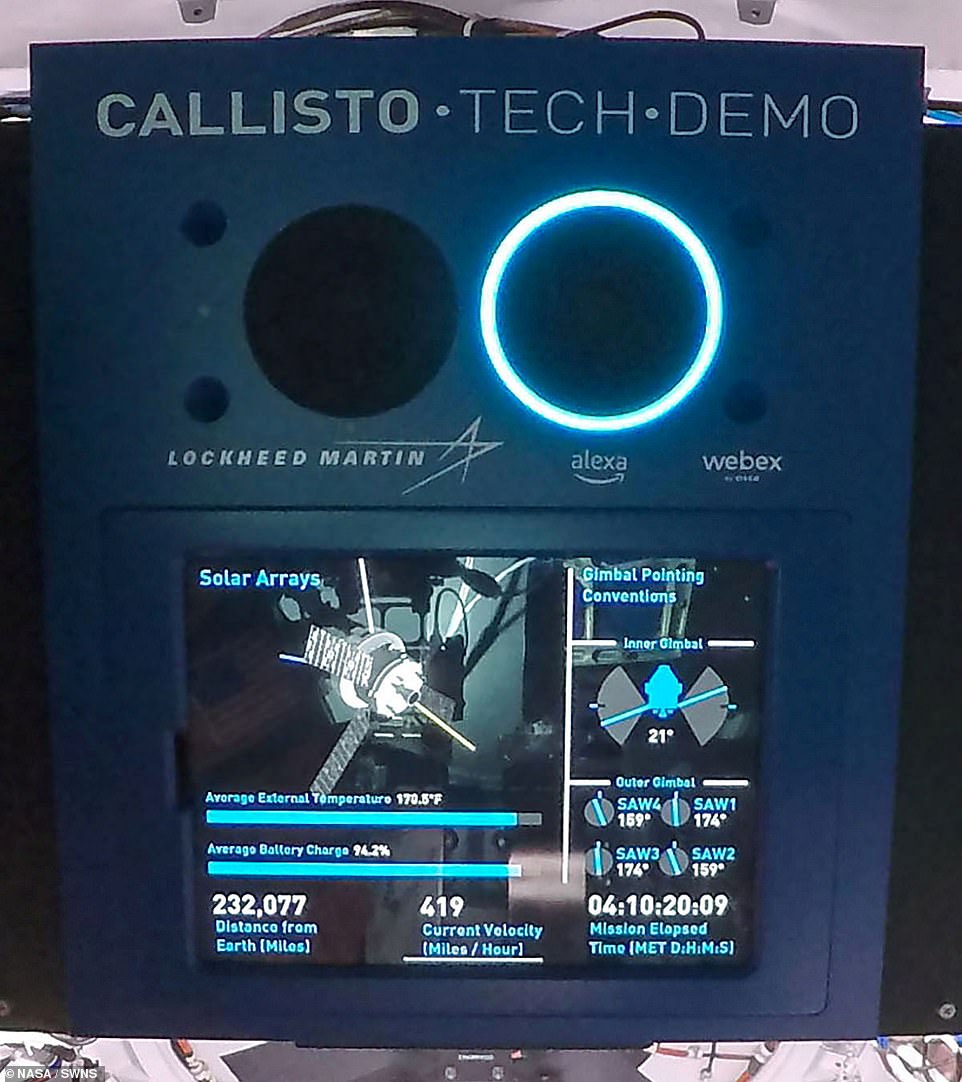 Orion features the so-called ‘Callisto payload. ‘The blue circle may reference the HAL 9000 computer from the 1968 film 2001: A Space Odyssey, although that had a red light in a circle

Two other mannequins named Helga and Zohar are sitting in Orion’s passenger seats. They reflect the US space agency’s determination that a manned flight to the moon will soon include a woman.

The dummies have torsos made of materials that mimic a woman’s softer tissue, organs and bones.

They are fitted with some 5,600 sensors and 34 radiation detectors to measure the amount of radiation exposure they encounter during the mission.

One is wearing a radiation protection vest and the other is not.

Artemis I is designed to show that the SLS rocket and Orion capsule are ready to carry astronauts for Artemis II and, ultimately, the Artemis III mission to return humans to the moon.

In preparation for Orion’s return to Earth, NASA’s Exploration Ground Systems Program and the US Navy, who will recover Orion from the Pacific Ocean, completed its final training day at sea, using a mock capsule in the water for divers and small boats to practice open water recovery procedures.