Can you tell what’s missing from this photo of San Francisco bay?

Never-seen-before photos showing the city of San Francisco before it was flattened by a massive earthquake over 100 years ago are going up for auction.

Some of the city’s former historic landmarks which no longer exist are shown in pictures taken 16 years before 80 per cent of it was wiped out in the devastating earthquake of 1906.

There are numerous panoramas of the bay but the iconic Golden Gate Bridge is conspicuously absent because it wasn’t built until the 1930s.

Also missing in the photos is the notorious Alcatraz prison, home to many of the US’ most dangerous criminals, which was developed on a rocky island in the bay in 1910. 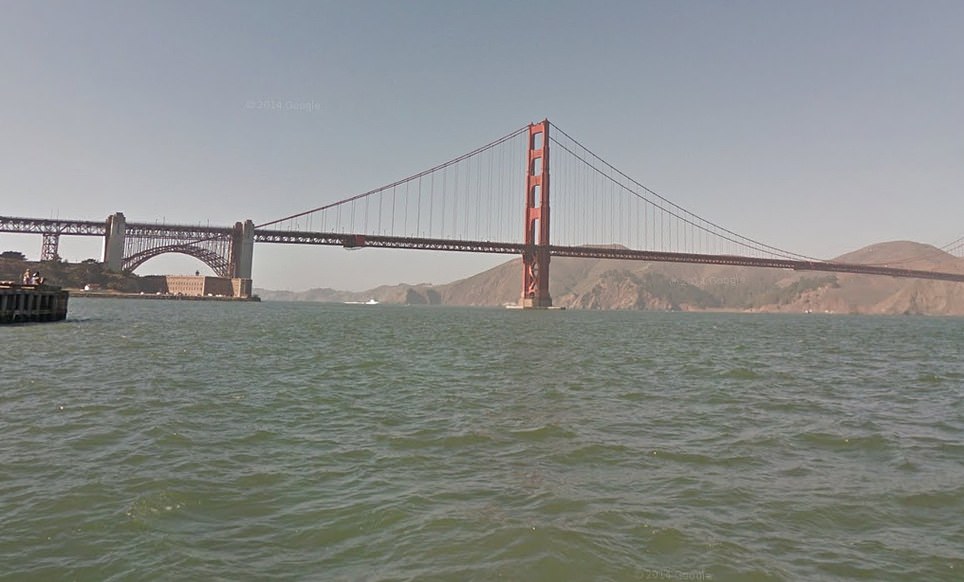 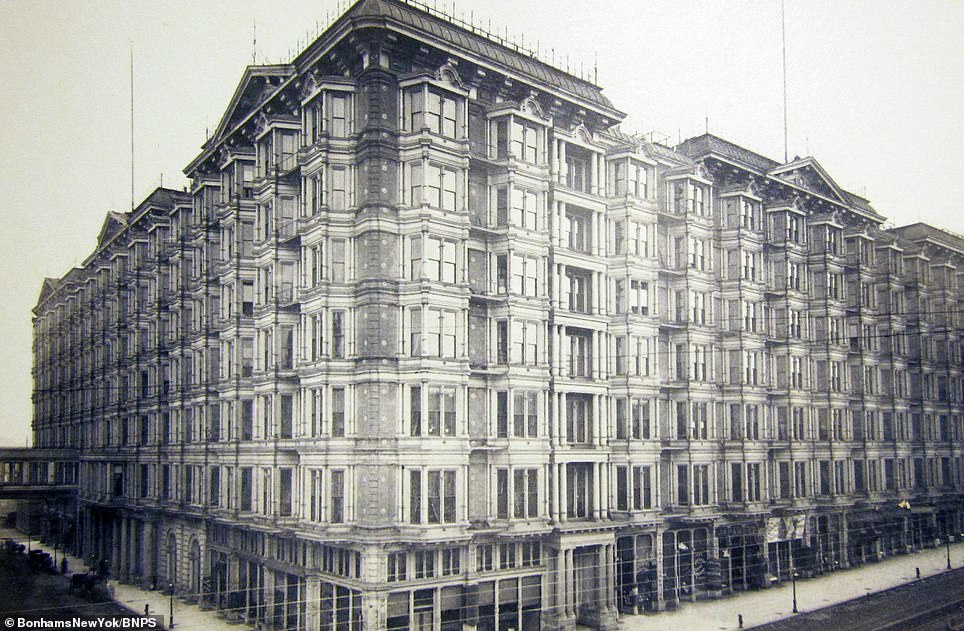 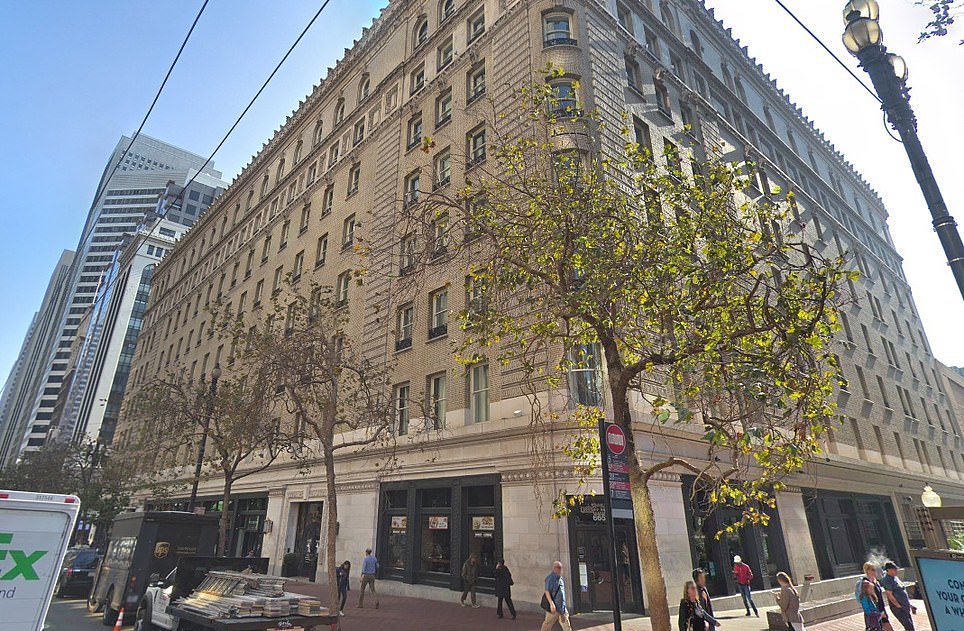 The Palace Hotel, San Francisco shown its original form 128 years ago. It was completely destroyed by a fire in the 1906 earthquake which completely eradicated 80 per cent of the city’s buildings. The modern day incarnation is still called the Palace Hotel and charges over £200 per night for a room

The photos were purchased by a Swedish tourist who visited the famous city in 1890 and collected the remarkable images as a logbook of memories of places he had visited on his trip.

He purchased the photos from prominent San Francisco dealer Isaiah West Taber and his family kept hold of them for over a century before consigning them for sale with auctioneers Bonhams in New York.

There are also photos of a growing Los Angeles including a spectacular panorama from the roof of the prestigious Nadeau Hotel.

They are tipped to sell for £1,500 as the auction gets underway on Wednesday.

Tom Lamb, specialist at Bonhams New York, said: ‘This is an attractive group of late 19th century images of pre-earthquake San Francisco and the evolution of Los Angeles.

‘The San Francisco views include civic buildings and villas, Chinatown, hotels and seascapes of the bay, while Los Angeles is captured in its infancy. 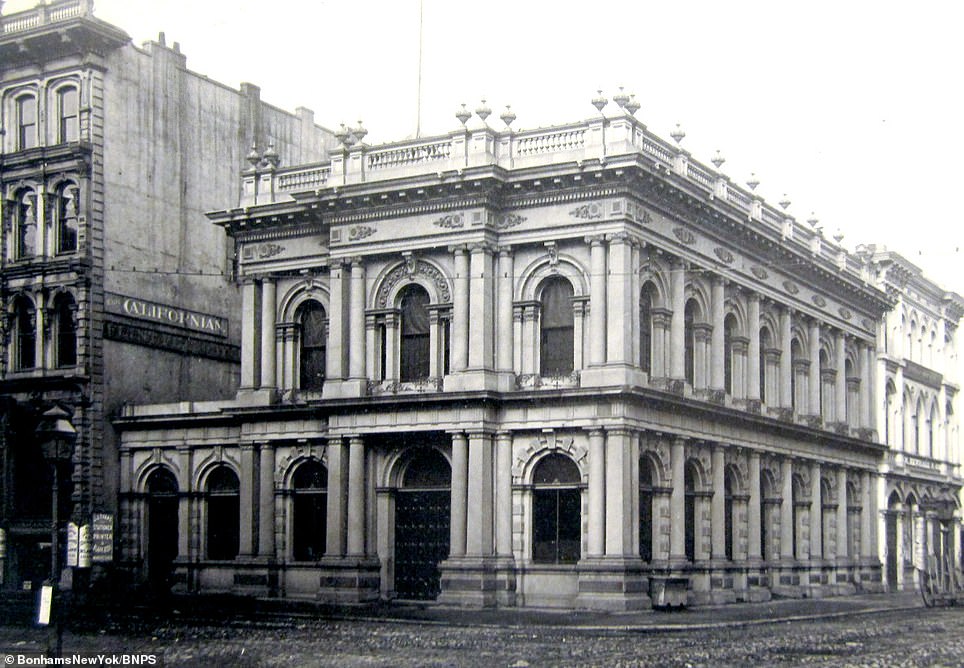 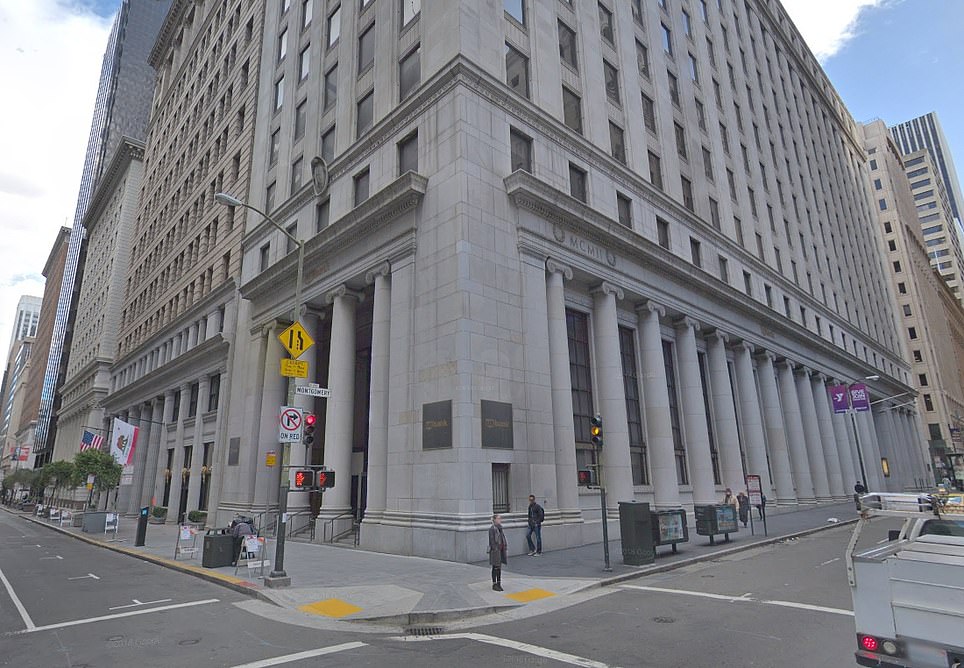 The original Bank of California building in the city’s downtown area pictured in 1890. The current incarnation was rebuilt in 1908 after the devastating earthquake. The Bank of California was opened in San Francisco, California, on July 4, 1864, by William Chapman Ralston. It was the first commercial bank in the Western United States 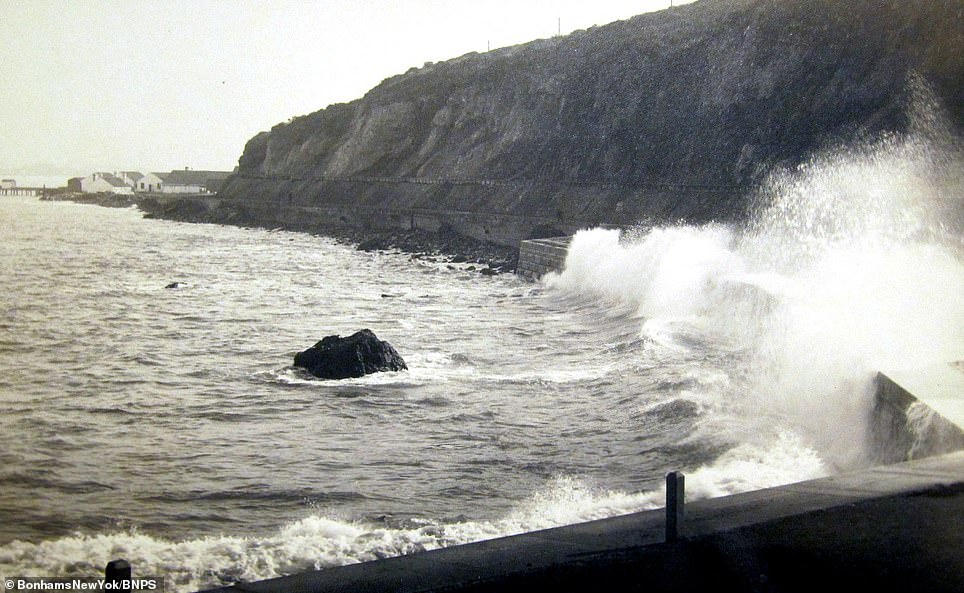 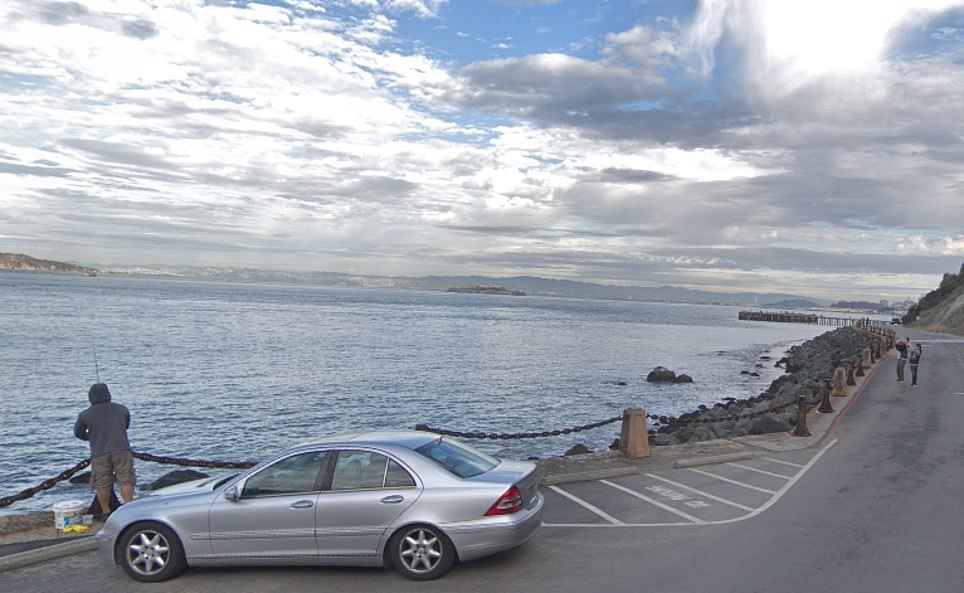 The surf at Fort Point, Golden Gate slightly east of where the Golden Gate Bridge was eventually built. Fort Point is a defensive position which was completed just before the American Civil War by the United States Army, to defend San Francisco Bay against hostile warships. Fort point today offers unparalleled views over San Francisco Bay and is a popular spot for many people to go fishing. The jutting rocks of the coastline also produce large waves which in the winter months are favored by the regions numerous surfing fanatics 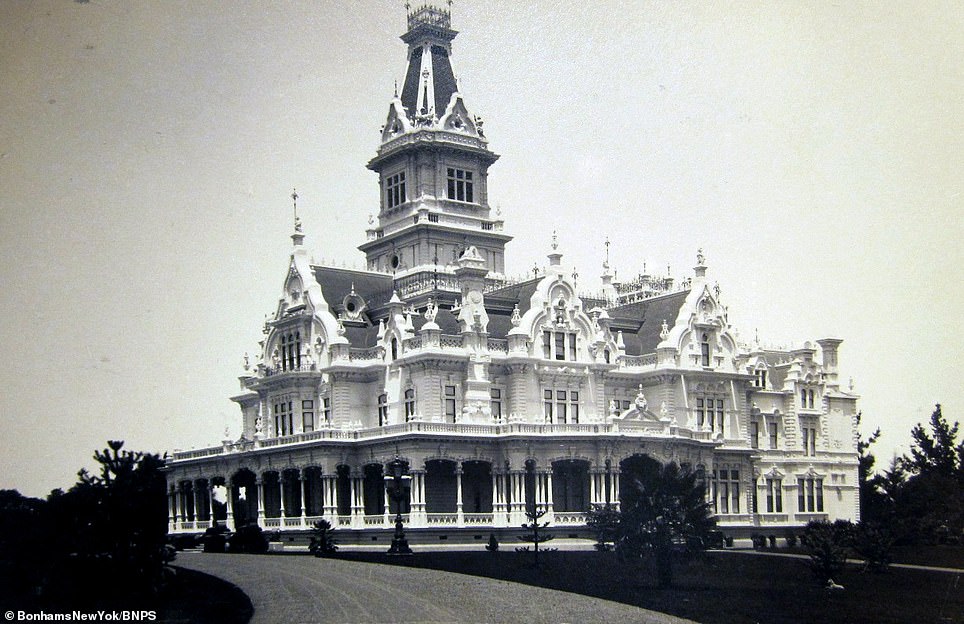 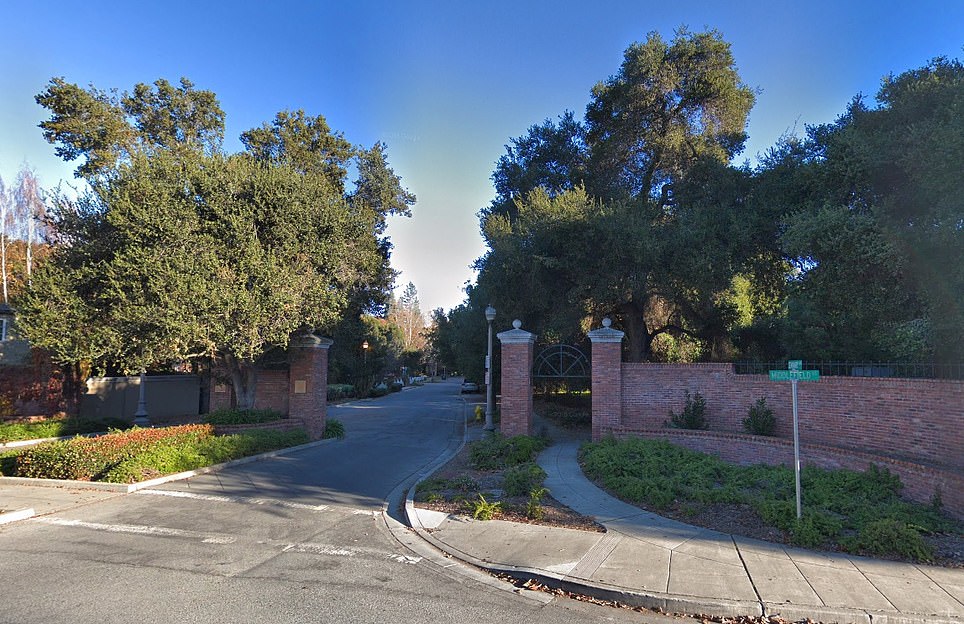 James C Flood’s residence, Linden Towers, at Menlo Park, California. The building was built by silver magnate James Flood during the 1870s and was almost seven stories tall containing 43 rooms. It was said to be the largest house west of the Rocky Mountains and among the most regal private abodes in all America. The house was slowly demolished after falling into disrepair having changed hands several times after Flood’s death and the 600-acre estate was slowly broken up and used to build modern housing. The estate’s original red brick wall is still present from its boundary in Menlo Park and runs nearly a mile-long

‘Large swathes of San Francisco were destroyed in the earthquake and fire so it is fascinating to see how the city looked before that major disaster.

‘The album was collated by a Swedish tourist who travelled around the United States at that time and purchased photos as souvenirs of the places he went to.

‘The album has remained in the family since then.’

San Francisco was founded on June 29, 1776 by colonists from Spain. The California Gold Rush of 1849 brought rapid growth as treasure seekers flocked to the area in search of a fortune. Silver discoveries further drove a surge in the population.

Three-quarters of San Francisco was destroyed by the 1906 earthquake and fire, but the city was quickly rebuilt.

After the Second World War, San Francisco became the centre of the ‘hippy’ counterculture and liberal activism in the United States. 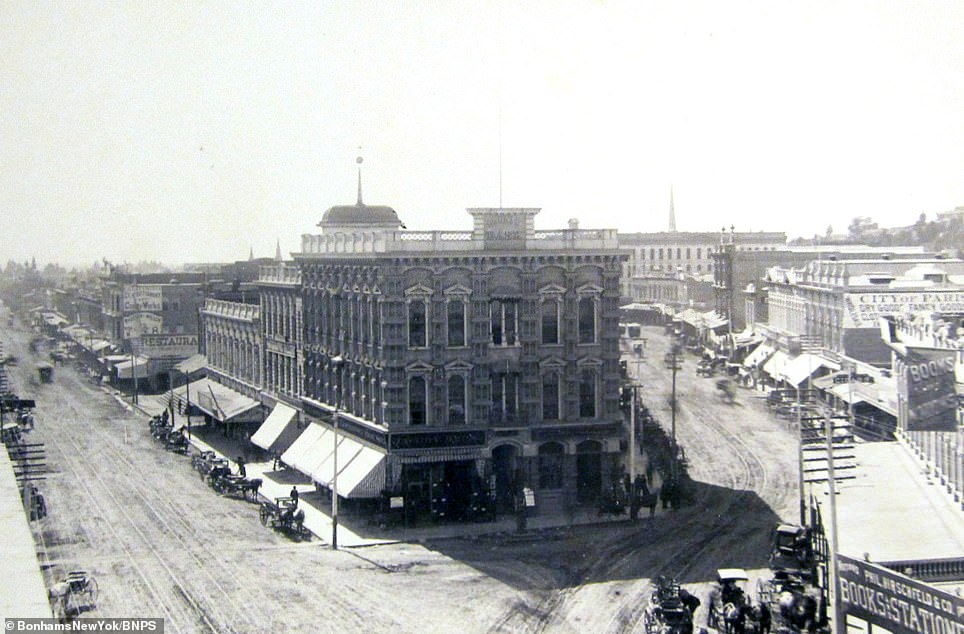 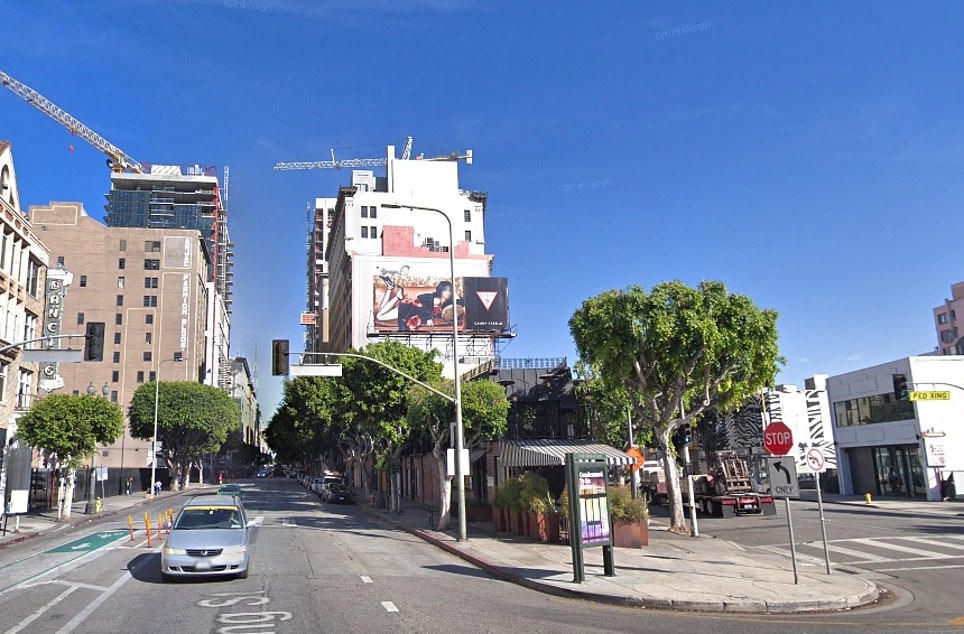 The junction of Main and Spring Streets, Los Angeles pictured in their early states. Horse-drawn carts could be seen processing along the wide boulevards running up the the junction and the tall buildings which the area is now home to are nowhere to be seen. Main and Spring Streets now meet in the wealthy downtown area of Los Angeles where real estate commands multi-million dollar price tags. The junction is located just around the corner from the Staples Center, which is home to the LA Lakers and Clippers among others of the city’s sports teams 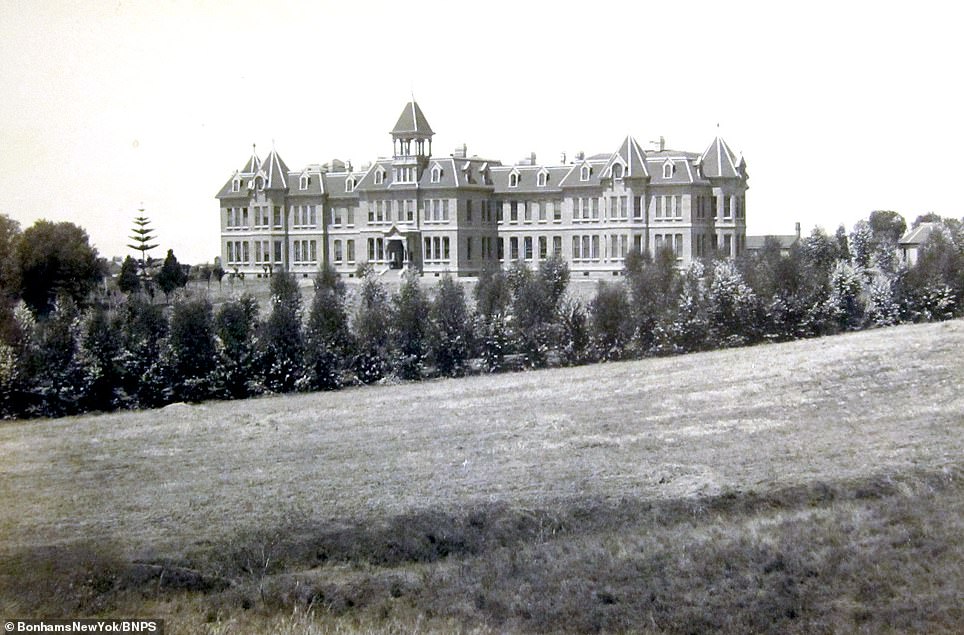 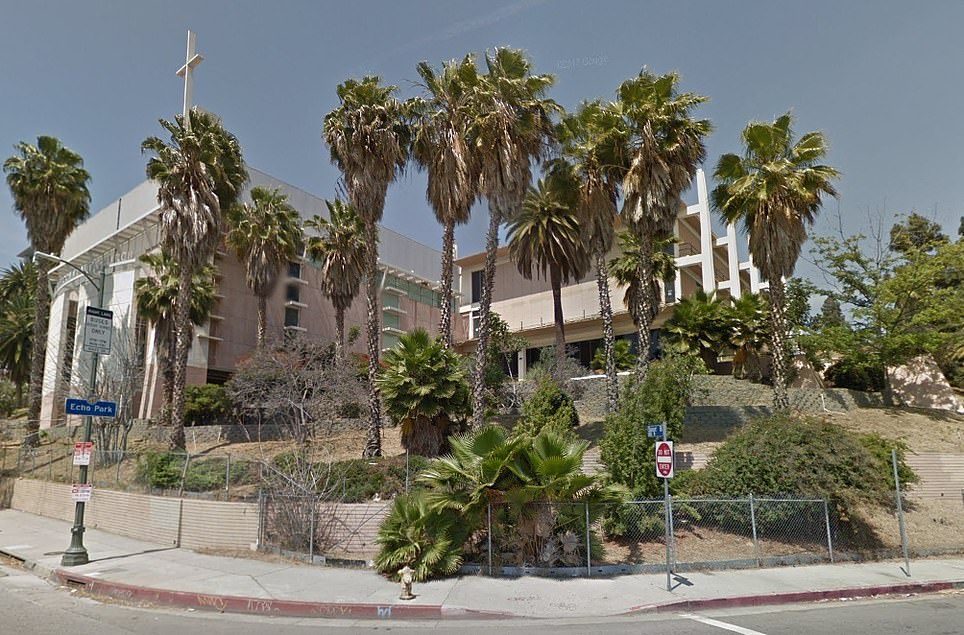 The Sisters’ Hospital, Los Angeles, also known as the Los Angeles Infirmary was opened in 1885 on the site of Beaudry Park. The eight-acre private reserve rose above the canyon that today carries Sunset Boulevard between the city’s downtown and Echo Park districts. The site, just of LA’s famous Sunset Boulevard, is now home to a church and has been broken up from its original eight-acre footprint to make way for several houses and commercial properties. The site was home to lush tropical gardens and exotic plants, some of which still survive to this day 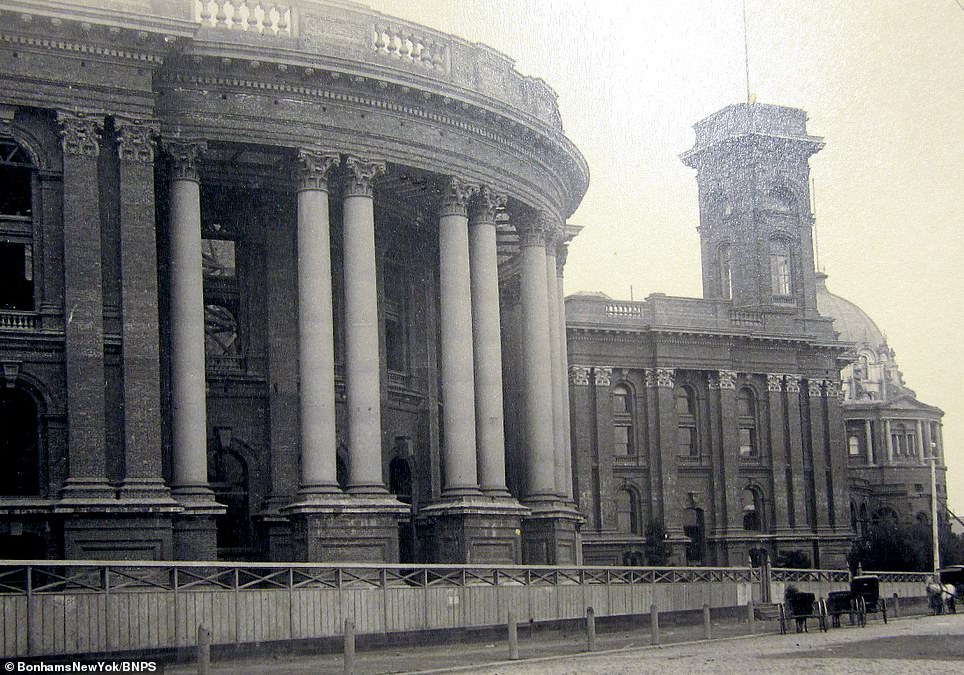 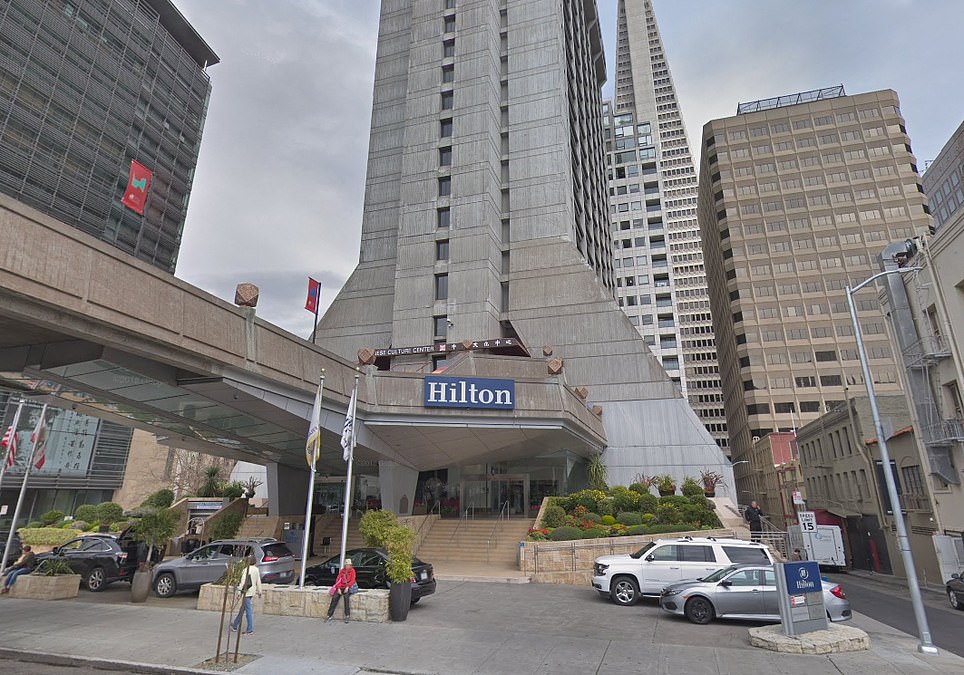 The Court House, San Francisco around 1890. The old court house was tacked onto the end of San Francisco’s City Hall. City hall’s collapse during the 1906 earthquake and fire storm was attributed to shoddy construction, rooted in political corruption and cost-cutting measures. The current site is home to a Hilton Hotel which sits in between some of San Francisco’s tallest skyscrapers. Many of the buildings surrounding the old court house were completely destroyed by fire after the devastating earthquake of 1906 and the area was mostly cleared and rebuilt from the ground up 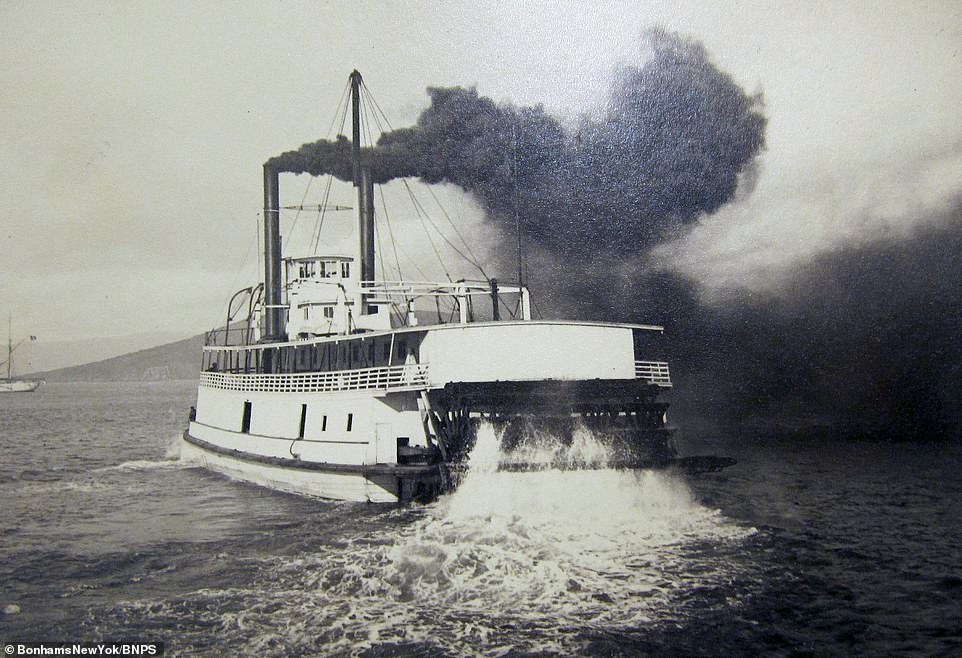 A steam boat billowing out grey smoke from the coal furnace as it paddles through the water of the San Francisco Bay. The ferry system was crucial in the city’s early years for getting supplies across the bay towards outlying settlements. The construction of the Golden Gate Bridge in 1937 reduced the need for slow and expensive ferry travel 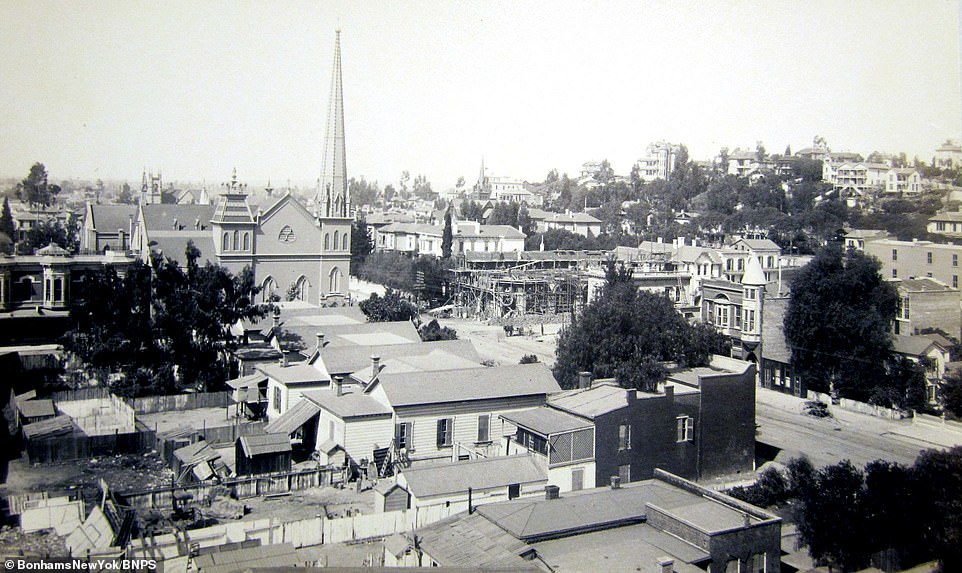 The view South West from the roof of the Nadeau Hotel in Los Angeles. The hotel, now demolished, was a focal point of the downtown neighbourhood. Remi Nadeau opened the hotel in 1882 with a grand ball attended by the Southland’s elite. He bought the site in 1872 for the ‘un-heard’ of sum of $20,000. The Nadeau boasted of the first electric elevator to be installed in Los Angeles.