Shocking video has captured the moment laughing bullies forced a 14-year-old boy with cerebral palsy to lie face down in a muddy creek so they could use him as a human bridge.

Brett Corbett was made to lie in the freezing cold creek in Nova Scotia, Canada last Tuesday as about 30 students from his high school yelled profanities and laughed at him.

The footage of the ordeal has since gone viral on social media and has prompted a police investigation and several anti-bullying protests at Glace Bay High School.

Brett Corbett, 14, was made to lie in the freezing cold creek in Nova Scotia, Canada last Tuesday as students used him as a human bridge to cross the water

The boy initially told his mother, Terri McEachern, that he was dared to swim in the creek behind his school.

But the videos filmed by his classmates tell a different story.

In one video, Brett can be seen standing in the middle of the creek as he is surrounded by a group of teenagers.

He was filmed lying down on his stomach as the water rushed around him.

A girl then stepped on his back and leaped across to the other side of the bank.

Another video shows Brett standing up out of the water before the students order him to lie back down again.

At least three students used Brett as a human bridge, while others threw rocks at him while he was lying in the creek. 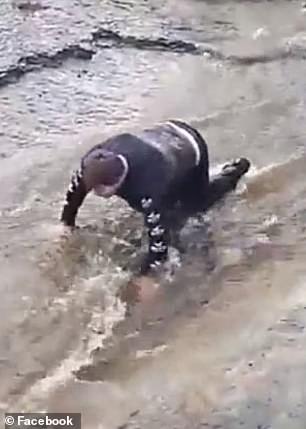 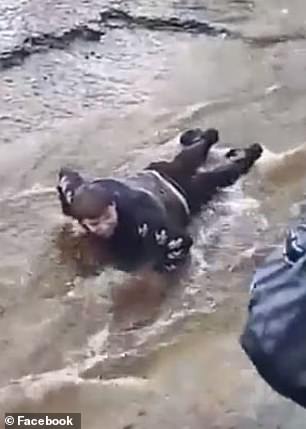 The 14-year-old initially told his mother that he was dared to swim in the creek behind his school but the videos filmed by his classmates show students yelling: ‘Do it you f**king b***h’ 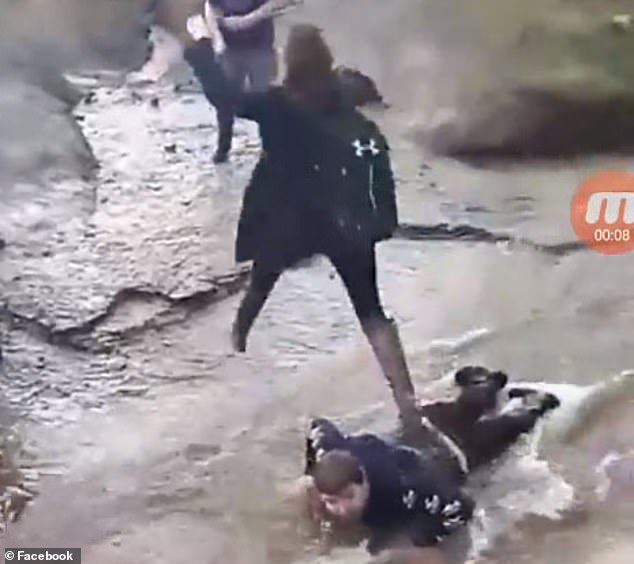 ‘I was standing there as a dare and then they said if ‘you don’t get in I’m going to effin punch you, get on your effin stomach’,’ Brett told the Global News.

‘Then I let a girl walk on my back thinking it was nice, but then I realized it wasn’t nice at all.

‘I was freezing… no one tried to help me. The girl literally walked on my back, she said, ‘could you get back down please, I don’t want to get wet’. I shouldn’t have let her walk on my back.’

Brett said he is subjected to this kind of bullying on a daily basis.

His heartbroken mother said the school hasn’t done anything to stop her son being bullied but the video going viral finally prompted officials to suspend several students.

‘I’m heartbroken and angry everyone in that video is standing and watching and no one helped. I want this to stop,’ McEachern told The Chronicle Herald. 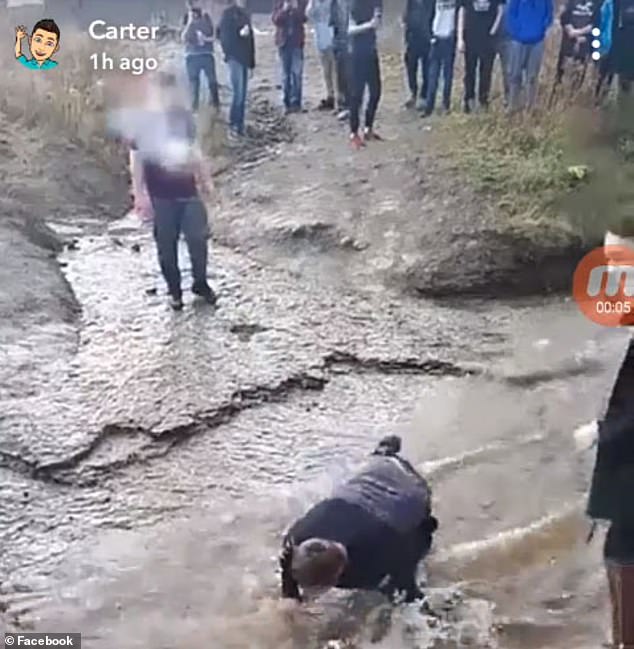 About 30 students stood around laughing and throwing rocks at Brett as he was made to lie in the freezing water. At least three students used him as a human bridge

‘As of yesterday there was no mention of it at the school. They did suspend the students after it went viral. But before that the school tried to brush it under the rug.

‘A teacher assistant at the school actually told him today it’s his fault that students are getting suspended, that he chose to take part in that incident and he should watch his actions.

‘He said he was being pushed into it.’

Cape Breton-Victoria Regional Centre for Education said they are treating the incident with Brett seriously.

‘The behaviour of the students involved is not one that the Centre for Education is proud of,’ the school district said in a statement.

Several students walked out of class on Friday in protest over the treatment of Brett.

There is also an anti-bullying demonstration scheduled for Tuesday at the school.