A Canadian man who was convicted nearly two decades ago of murdering and dismembering his girlfriend, earning him the moniker ‘the butcher of Gatineau,’ has been granted parole and is preparing to start a new life as a transgender woman.

‘You are assessed as a low to low end of moderate risk for both general and violence recidivism,’ the parole board wrote of Farhan.

Zahra Farhan, 46, formerly known as Khaled Farhan, was convicted in 2000 of second-degree murder in the brutal cocaine-fueled killing of 24-year-old Karina Janveau (pictured)

The woman, who is visually impaired, plans to move into a halfway house and get a service dog to help her with daily tasks.

Farhan was convicted in 2000 of second-degree murder in the cocaine-fuelled killing of 24-year-old Karina Janveau inside the couple’s apartment in Gatineau, Quebec, in the summer of 1999, reported Ottawa Citizen.

The suspect, then still known as a man, testified during his trial that he had pushed his girlfriend of less than a year and she fell and hit her head, resulting in her death.

However, an autopsy showed the young woman was stabbed multiple times, including post-mortem.

Farhan kept Janveau’s decomposing body for days in the basement, until neighbors began complaining about a foul odor.

That is when Farhan took a kitchen knife and proceeded to butcher the dead woman’s corpse in the bathtub – a gruesome process that took two hours.

Farhan then stuffed some of the body parts into a duffel bag and dumped it along a stretch of train tracks behind their apartment building. 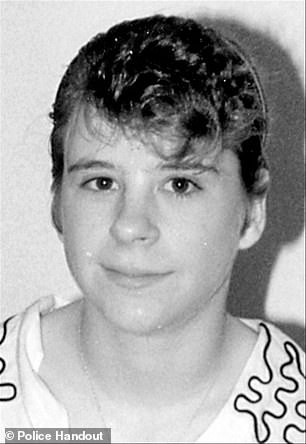 Janveau’s body was carved up with a knife and her remains were dumped around her and Farhan’s apartment building in Gatineau, Quebec

The other half of the remains he tossed in the dumpster.

In an attempt to cover up the murder and direct the attention of police away from himself, Farhan went on TV pleading for help to find his missing girlfriend.

Farhan lied that Janveau, who was battling a drug addiction and had physical disabilities, had left on a camping trip with a drug dealer.

Despite his efforts to deceive invesitgators, Farhan was arrested just days after the victims’ remains were recovered.

One of the first police officers on the scene was Janvau’s younger sister, Sgt Guylaine Larose, who was left traumatized by the experience and later took her own life.

Farhan was initially sent to a men’s prison, but was later transferred to a women’s prison after identifying herself as a trans woman.

Under the conditions of her release, Farhan is required to live the rest of her life in a halfway house, report any romantic relationships and stay away from drugs and alcohol.