Canadian may have to pay $17,450 for-mid-air drunken meltdown

A Canadian man could be forced to pay more than $17,000 after his mid-air drunken meltdown forced an airplane to make an emergency landing accompanied by two US Air Force F-15 jets.

Charalabos Nassios, 40, pleaded guilty to charges of assault, mischief and uttering threats after heckling passengers during the Sunwing flight from Montreal to Cuba in July 2017.

Charalabos Nassios, 40, pleaded guilty to charges of assault, mischief and uttering threats after heckling passengers during the Sunwing flight from Montreal to Cuba on  July 6 2017. He is pictured being led off the plane by police in Montreal

Witnesses said Nassios started making threats and acting ‘aggressively’ towards other passengers, leading to aircrew ordering the flight to turn round shortly after takeoff and land back in Montreal.

He threatened to rip a fellow passenger’s nose off and even claimed to be part of a Russian gang, reported the Montreal Gazette.

‘The flight arrived back around 7:25 p.m. that same evening, and the disruptive customer was taken into police custody,’ the Canadian airliner said shortly after the incident.

Two F-15 jets, which are armed with air-to-air missiles and can reach speeds of up to 1,656 mph, were dispatched from Barnes Air National Guard Base in Massachusetts to accompany the plane as it crossed U.S. airspace.

‘NORAD was monitoring the situation and responded accordingly, and provided escort back to Montreal,’ an Air Force spokesman told Newsweek. 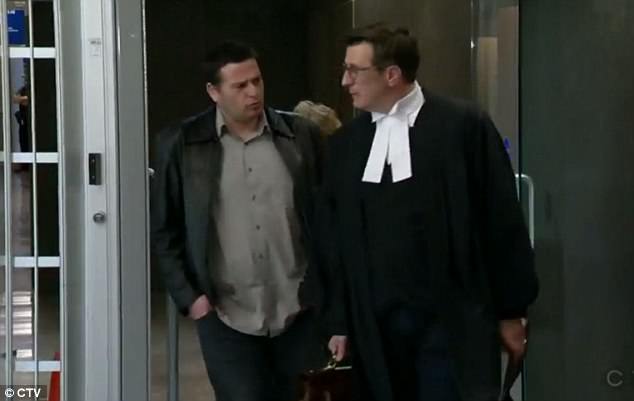 Nassios leaves a court in Montreal on Wednesday alongside his lawyer, Tom Pentefountas, who is urging the judge not to impose the crippling fine

The spokesman said escorts were provided for ‘credible’ threats but this was ‘not a common occurrence’.

Nassios has signed up for Alcohol Anonymous and already filed for bankruptcy.

His lawyer, Tom Pentefountas, believes forcing him to pay a fine while he is already in a state of financial ruin would be ‘useless and unrealistic’ and added that the flight happened during a ‘difficult time’ in his life.

Nassios will be sentenced on April 18.

He is facing separate charges for assault, impaired driving and uttering threats, to which he has pleaded not guilty.