A notorious Canadian mobster has been assassinated in a hail of bullets three years after his brother was shot dead – and a year after he survived a similar attack.

Pasquale ‘Fat Pat’ Musitano, 53, was gunned down at a Burlington, Ontario, parking lot in broad daylight at around 1pm on Friday, while meeting with two associates.

They were also shot at during the carnage and Clary, Musitano’s longtime bodyguard, was wounded and rushed to hospital in a critical condition.

The newer model four-door saloon – similar in appearance to an Infiniti Q50 – made off successfully and no arrests have been made.

The boss is presumed to have been conducting business face-to-face with Avignone and Clary because his hulking GMC Yukon had been armour-plated and fitted with inch-thick glass a few months before his brother’s murder three years ago.

Pat (left) and his younger brother Angelo (right) had been marked men since the deaths of John ‘Johnny Pops’ Papalia, a made man in Buffalo’s Cosa Nostra, and one of his lieutenants Carmen Barillaro, in 1997. Angelo Musitano, 39, was shot dead in the driveway of his home in Waterdown in May, 2017, and a few weeks later an attempt was made on Pat. The brothers are pictured together in 1998.

Angelo Musitano, 39, was shot dead in the driveway of his home in Waterdown in May, 2017, and a few weeks later an attempt was made on Pat.

And in April last year yet another assassination bid had failed against Pat, despite him being peppered by four bullets in a parking lot, one hitting him in the head.

‘He was a dead man walking,’ one Hamilton police officer told the Post.

Pat and his younger brother had been marked men since the deaths of John ‘Johnny Pops’ Papalia, a made man in Buffalo’s Cosa Nostra, and one of his lieutenants Carmen Barillaro, in 1997.

Ken Murdock, the gunman in both murders, was hauled in and cooperated with police, informing detectives that Pat had ordered the hits.

Pat and his brother Angelo were later arrested and, unable to shut Murdock up, agreed to a plea bargain.

They would admit to conspiracy to murder Barillaro if the charges facing them for Papalia’s killing were dropped.

In 2000, the brothers were jailed for 10 years each for their roles in Papalia’s murder.

Upon release from prison in 2007, their grip on power had waned.

John Ross, a retired Hamilton police sergeant, was tasked with monitoring Pat’s parole and met with him as soon as he was freed.

‘I let him know straight up – the likelihood of your survival is certainly limited now. And he knew,’ Ross told the Post. ‘This end was inevitable, for sure – and Pat knew it.’

The Musitano family had established itself in Hamilton in 1937 when Pat’s great uncle Angelo Musitano fled Delianuova in Calabria, Italy, after killing his sister.

Known as ‘The Beast of Delianuova’, Angelo Musitano had dragged his sister through the streets of the small town and stabbed her to death in front of her lover’s house.

Pat had inherited the family business after his father Dominic died of a heart attack in 1995.

A more ambitious gangster than his father, Pat had made the decision – a few months before he was arrested for Papalia’s killing – to join forces with a Sicilian Mafia don out of Montreal, Vito Rizzuto. 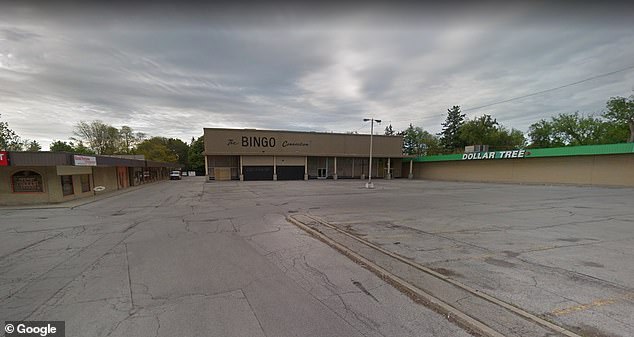 Pasquale ‘Pat’ Musitano, 53, was gunned down at a Burlington, Ontario, parking lot (stock image) in broad daylight at around 1pm on Friday, while meeting with two associates

Rizzuto had at the time been expanding his influence into the Toronto area – controlled by the Calabrian families – but by the time Pat and Angelo were released, the Sicilian had been extradited to the US charged with three murders.

This was a considerable blow to Musitano, not least because his family was of Calabrian branch of the mafia – known as the ‘Ndrangheta – and his alliance with the Sicilian was seen as a grave betrayal.

‘Most people in the community respected but feared Pat and would talk about how “the area was safer before Pat was in jail,”‘ Paul Manning, a Hamilton police officer told the Post.

‘Wiseguys, however, described Pat as a “snake” and would constantly discuss – with enthusiasm – how he would get whacked and who would do it.’