Canadian police have made two arrests in the ‘horrifying’ daylight shooting where 141 shots were fired in 21 seconds, killing a 17-year-old bystander at the scene.

The shooting took place on September 14, 2019 in the Toronto suburb of Mississauga. Six people were shot including a 13-year-old girl, a 50-year-old woman and three teenage boys. All have been released from the hospital.

Jonathan Davis, 17, was killed after he was struck in the gunfire.

Peel Police announced Tuesday the arrest of Safeer Ahmad, 19, and Jahvon Valdez, 21, in the Davis’ murder.

But they say the investigation is ‘far from over’ and they’re still on the hunt for the seven suspects who actually opened fire.

Canada police have made two arrests in the ‘horrifying’ daylight shooting where 141 shots were fired in 21 seconds, killing a 17-year-old bystander at the scene. Peel Police released footage of the shooting for the first time on Tuesday following the arrests 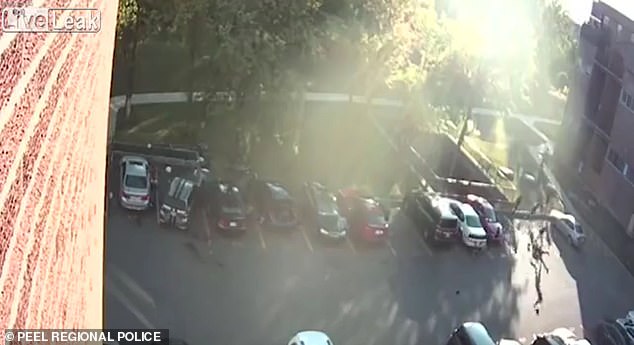 The footage shows two vehicles pull into a parking lot behind an apartment where a group of men were hanging out in Mississauga, near Toronto. Nine suspects get out of the vehicles and release and a long spray of bullets 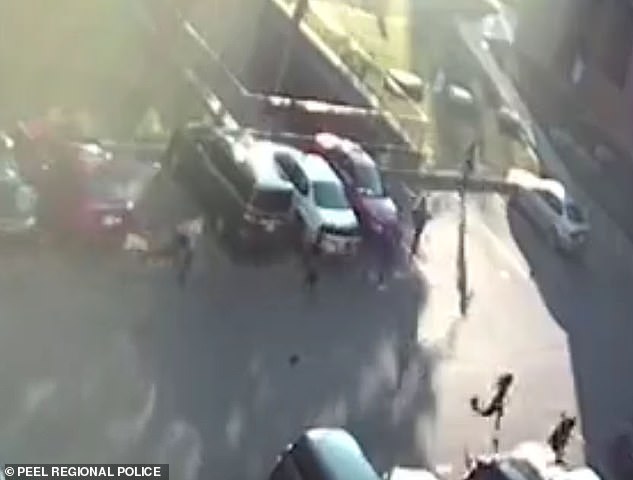 A close up shows how the men who were loitering around the cars fled the scene on foot, with the gunmen chasing them

The footage, taken from various security cameras, shows a black SUV drop a group of men in a parking lot then drivng off. The men all run off in the same direction.

The video then cuts to an aerial view of a parking lot in front of an apartment complex on Darcelle Avenue near Morning Star and Goreway drives, where a group of men are seen huddled between parks cars and talking around 6.30pm.

Suddenly two vehicles carrying a total of nine suspects pulled into the parking lot, though the cars were out of the camera’s frame.

A few people appear with guns and open fire.

The group of men who were around the cars then scramble and flee, some of them trying to get into the cars for safety.

The people with guns appear to chase their victims firing an endless spray of bullets.

As the shots were fired the two drivers that dropped off the shooters turned around to be ready to flee the scene as getaway vehicles. 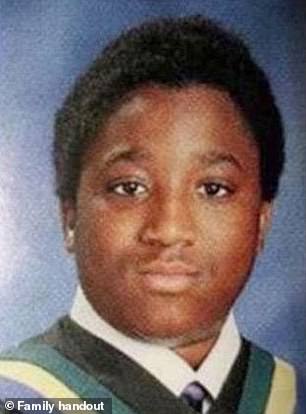 Jonathan Davis, 17, (pictured left and right) was killed in the shooting as he was waiting for family members to pick him up at the apartment. He was a senior in high school at the time

Supt. Martin Ottaway said that in the short period of time that the shooting unfolded suspects fired at least 141 rounds with stray bullets hitting 15 different apartments and nine different vehicles, according to CP24. The shooting lasted for 21 seconds.

Ottaway said six people were shot including three innocent bystanders, Davis among them.

Davis was shot as he waited to be picked up by family members behind the building. He was pronounced dead at the scene.

The 50-year-old woman and the 13-year-old girl were in separate apartments within the building, struck by flying bullets. 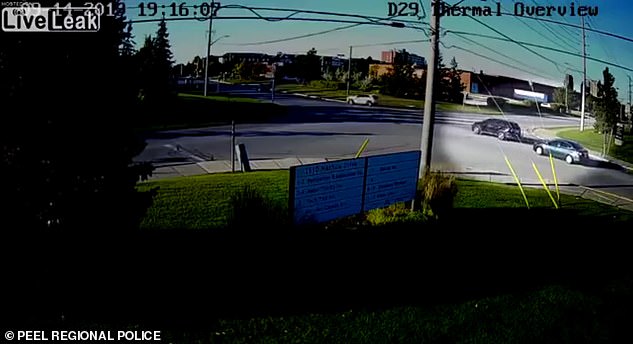 The two vehicles pulled into this parking lot and a group of men were seen exiting and running, presumably towards the Darcelle Avenue apartment where they opened fire

Ottaway said hours after the shooting Ontario Province Police found one of the suspect vehicles on fire in Caledon.

Police have previously said that the suspects in the shooting were motivated, in part, by a rap video that had the verses ‘challenging other people within the community’.

On Tuesday he said the shooting pertained to a ‘dispute’ between two different gangs active in the area.

Deputy Chief Nick Milinovich said the shooting was ‘one of the most severe incidents in Peel history’ and was a shocking level of violence given it was in the presence of innocent children, many of whom were visiting an ice cream truck parked nearby.

Davis’ heartbroken family said Tuesday they’re hopeful with the arrest of two suspects but said ‘no justice will ease the pain of losing our son.’

This is an ongoing investigation and anyone with information is asked to call the Homicide and Missing Persons Bureau at 905- 453–2121, extension 3205. Anonymous information may also be submitted by calling Peel Crime Stoppers at 1-800-222-TIPS (8477) or by visiting peelcrimestoppers.ca