Canadian skydiver SURVIVES 5,000ft plunge after both her parachutes failed to open

Skydiver SURVIVES 5,000ft plunge from an airplane in Canada after both her parachutes failed to open

A skydiver is lucky to be alive after free-falling 5,000ft when both of her parachutes failed to open during a jump.

The 30-year-old woman was taking part in a dive at Montreal’s Parachutisme Adrénaline center on Saturday when the near-tragedy unfolded.

Witnesses described watching in horror as she plunged to earth with both her main chute and reserve trailing uselessly behind her.

A skydiver in her 30s walked away with non-life-threatening fractures despite plunging 5,000ft to earth in Canada when both her chutes failed to open (file image)

But she survived with non-life-threatening fractures after her fall was broken by some trees, and is now recovering in hospital.

She is thought to have broken several bones including her spine, medics say.

Denis Demers, who saw the accident, told Canada-Radio that it was a ‘miracle’.

‘I don’t know how a person can survive a fall from an airplane like that,’ he added.

Océane Duplessis, who was about to board her own plane for a dive, also watched the accident unfold.

‘We watched all the way to the end. We kept hoping something would happen,’ she told CBC. ‘We were very worried. Very.’

Skydivers hit speeds of around 110mph during jumps, which is terminal velocity for a human body free-falling to earth.

Parachutes – when properly deployed – slow the descent to around 17mph. 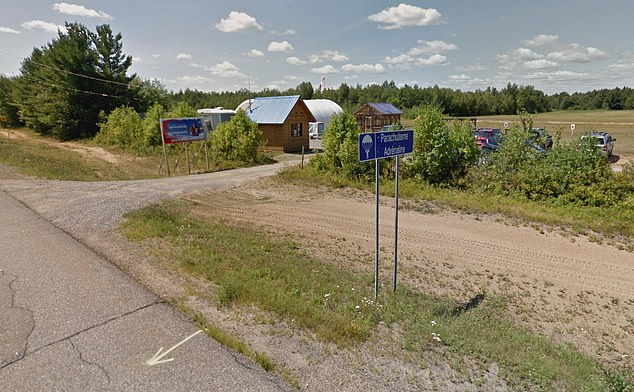 Witnesses at this skydive center in Montreal described their terror as they watched the woman plunge into trees at 110mph, before emerging alive

Each skydiver goes equipped with a main chute and a reserve chute, in the event that the first one fails.

Nancy Koreen, of the US Parachute Association, said it is ‘extremely rare’ for even one parachute to fail, let alone both.

Police are investigating the fall to establish whether criminal negligence is at play. They say the woman had experience of skydiving.

But Ms Koreen said reserve chute failures are often down to human error, because people panic fail to take the correct steps in an emergency.

‘To say none of the parachutes opened is probably misleading … It’s not really the way the parachute works,’ she said.