A female pilot is being hailed as a hero after making an emergency landing on a busy Canadian motorway – skimming overhead traffic lights on the way down.

All six passengers on board the Piper PA-31 Navajo survived uninjured after the terrifying landing on a three-lane road in Calgary, Alberta, following a power loss.

Footage from a security camera at a nearby car dealership shows the plane dropping on to 36th Street at 6am Wednesday – landing between vehicles driving just metres in front and behind. 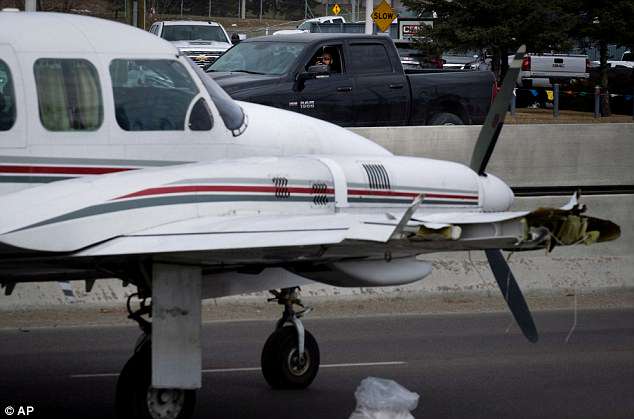 The plane narrowly missed a railway and a truck coming in to land, though the tip of one wing did clip a set of traffic lights, tearing the end away

It also landed only feet away from the path of a light rail passenger train, known locally as the CTrain. A populated neighbourhood lies on the other side of the motorway.

Driver Andrew Greig told how the aircraft scarcely missed the top of his truck as it roared down on to the street in front of him.

Mr Greig said: ‘It just went through the intersection, right through the lights and landed right in front of us.

‘It could have been worse – the door of the plane opened and they kind of walked out. I’m like ‘Oh, OK, so they seem to be alright.”

In addition to the pilot, there was another crew member and four workers from an oil and gas company onboard.

The plane was 5km away from the Calgary International Airport, having departed from another Alberta city, Medicine Hat, earlier that morning.

In a message to air traffic control, the pilot – who has yet to be identified – asked to land on a different runway saying: ‘I’ve just lost the right fuel pump, that’s why we’re requesting 35-right.’

There was some damage to the wing sustained from colliding with traffic lights that hung high above the road. 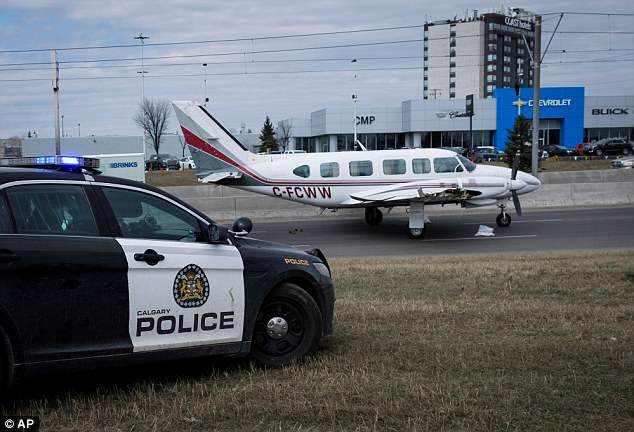 The pilot was just 5km from Calgary airport when she radioed air traffic control to say she had lost the right fuel pump and request a different runway, but never made it 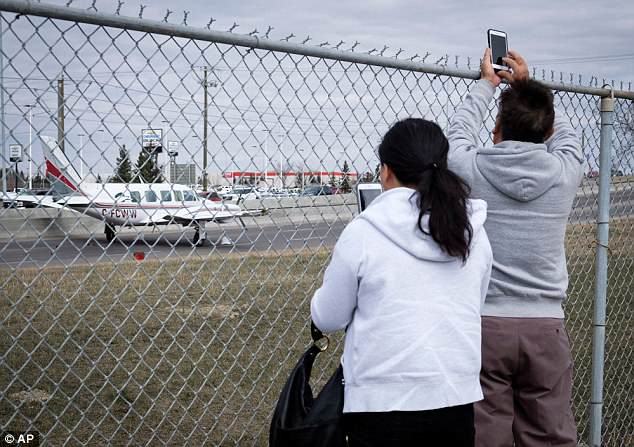 Stunned resident Jamal Hammoud watched the plane come to a landing in front of his home.

He said: ‘The pilot did an awesome job. I thought it was a CTrain accident.

‘When I looked, I couldn’t see the CTrain, but an aeroplane.

‘I saw the plane landing, just missing a car. Lots is going through your head when you see an aeroplane landing right in front of your house.

‘You think about your family, your house.’

Mr Hammoud said he woke up his wife and joked: ‘I have an aeroplane, let’s go for a vacation.

‘I even woke up the kids and told them, ‘I’m flying you guys to school’. And they all ran to the window to see the plane.’

The owner of the aircraft, Terri Super of Super T Aviation, said the plane lost power but has not confirmed why.

A press release said: ‘Ms. Super acknowledges the actions of the pilots to ensure a safe landing and is grateful that there were no injuries to those onboard or on the ground.’

The passengers were said to be ‘shaken up’ and have been given the week off.

The Canadian Transportation Safety Board is now investigating.

Stuart Brideaux, a spokesman for Calgary EMS rescue said: ‘There were no injuries to anyone on the ground or involving any other vehicular traffic on 36th street, so it was quite extraordinary.’