A Canadian man has admitted to faking his girlfriend’s death for his YouTube channel.

On January 22, Toronto-based Jason Ethier, who is known as ImJayStation on YouTube, uploaded a video on the platform in which he claimed that his girlfriend Alexia Marano was killed by a drunk driver — and he went on to share more videos in which he visited a roadside memorial and tried to contact her through an Ouija board.

But on Sunday, the 29-year-old admitted that he had made up the ‘death’ as a ‘prank’ — and social media users are furious.

Bright idea: Toronto-based Jason Ethier, who is known as JayStation on YouTube, has admitted to faking his girlfriend’s death for publicity 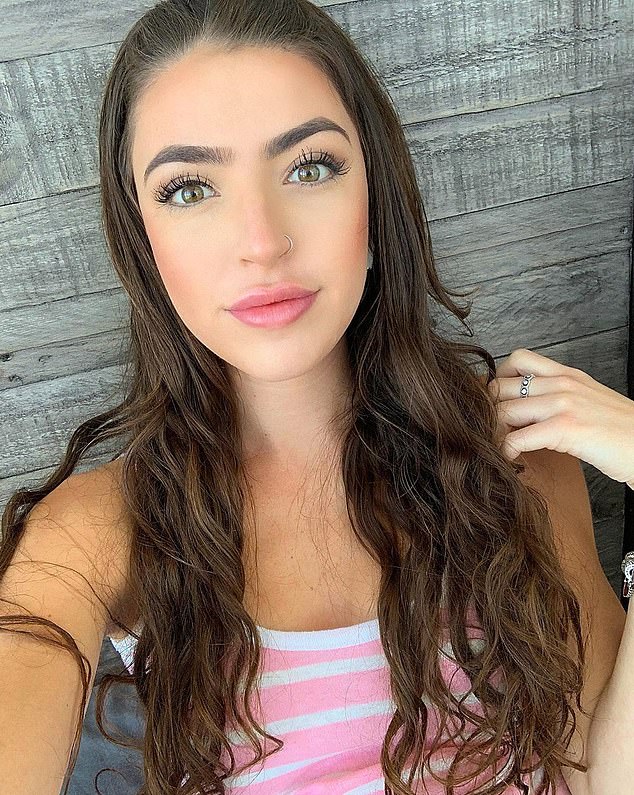 Prank: He claimed Alexia Marano was killed by a drunk driver

The initial video was titled ‘My Girlfriend Alexia Died… *Rest In Paradise*’ and had been viewed well over a million times before Jason deleted it.

He followed it up with two more videos that have also been deleted, including one called ‘Saying my last goodbye to my girlfriend Alexia,’ in which he filmed himself crying by a roadside memorial allegedly set up for her.

Jason had placed a cross with her name on it in the snow, and decorated the ground with battery-operated votive candles, framed photos, flowers, and a teddy bear.

The last video, posted just days after her alleged ‘death,’ was called ‘Dead girlfriend Ouija board challenge at 3am!! (Gone wrong).’

But on January 26, he backtracked, taking those clips down from his channel and uploading a new one in which he admitted it was all a hoax. 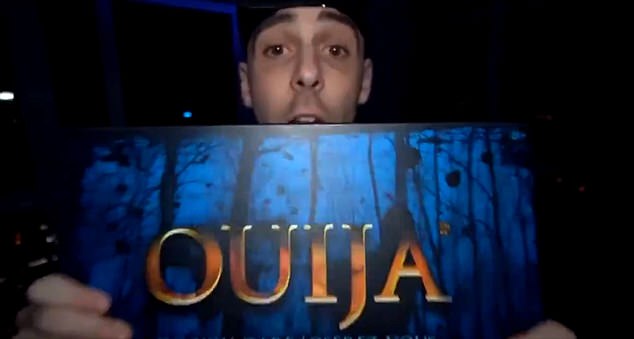 Classy: He went on to upload another video in which he pretended to attempt to contact her using an Ouija board, days after her alleged death 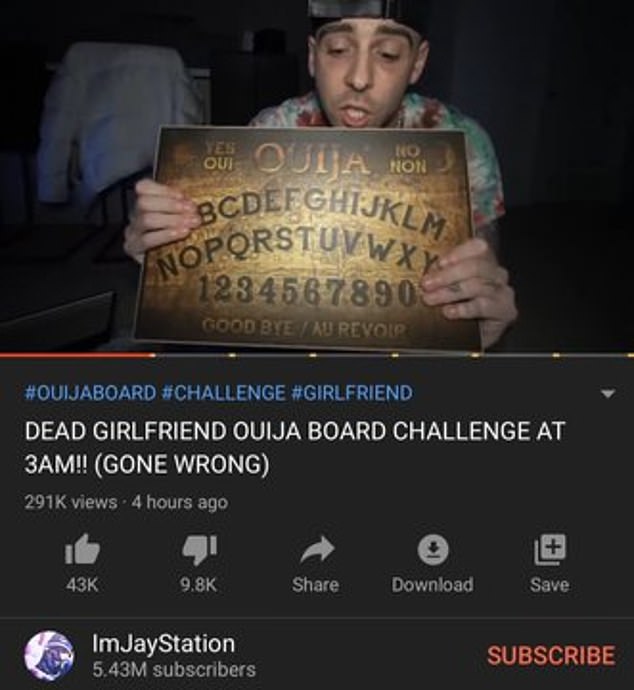 Yikes… He called the video ‘Dead girlfriend Ouija board challenge at 3am!! (Gone wrong) 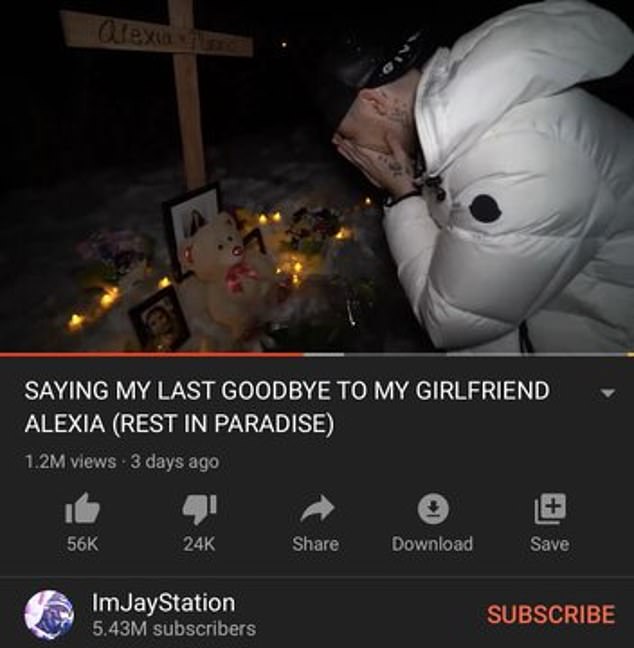 For the views: He uploaded another video of himself mourning at a memorial for her

‘I expected all of this to stay on YouTube and it didn’t,’ said Jason, who has 5.45 million subscribers and is known for trying to contact deceased celebrities with his Ouija board.

He explained that he and Alexia started dating four or five months before and had started making videos together, working on a shared ‘Dream Team’ channel.

The Dream Team channel wasn’t getting popular fast enough for Jason, so he proposed ‘pranking and saying she died’ to drum up more traction.

This didn’t go well. Fans on YouTube left negative comments and bashed Jason on Twitter, with some guessing it was a hoax before he admitted to it, and others simply slamming him for bad taste.

‘ImJayStation is without a doubt the worst, most disrespectful channel I’ve ever seen on YouTube,’ wrote one. 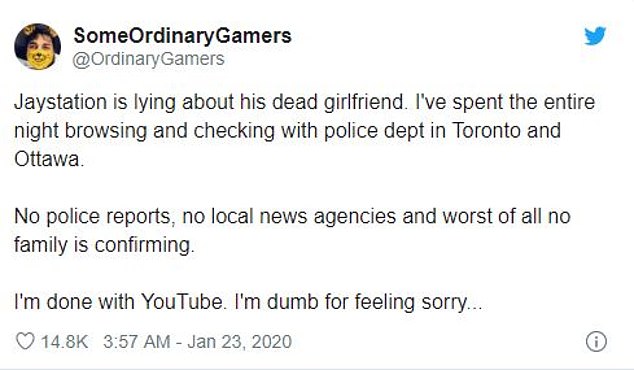 Investigating: Some people quickly realized that he was making it up

Gross: When social media users found out it was a hoax, they were furious

Liar: Thousands have slammed Jason for the clickbait video

Hated: One called him ‘the most bottom of the barrel scumbag on YouTube’ 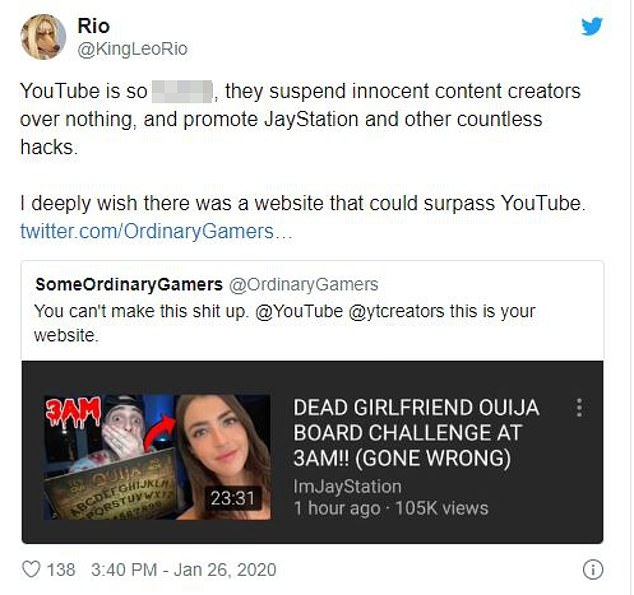 Rules: Some were angry at YouTube for not suspending his channel after the stunt

‘JayStation is probably the most bottom of the barrel scumbag on Youtube,’ wrote another.

‘Jaystation shouldn’t be allowed to monetize any of his content based on Youtube rules. The entire channel is pure exploitation of lying to your audience with click bait titles, but most of all, content. How can you lie about your gf being dead for views? wtf is wrong with ppl,’ another complained.

Alexia’s parents reportedly weren’t happy either. Jason said they ‘didn’t like’ the videos he made with the Ouija board and memorial site, and had demanded that Jason take the videos down.

Jason had initially refused, and Alexia moved out of his apartment. She has also deleted her social media accounts.

But even though he has deleted the original death hoax videos, he has continued to exploit the ‘prank’ on his channel. 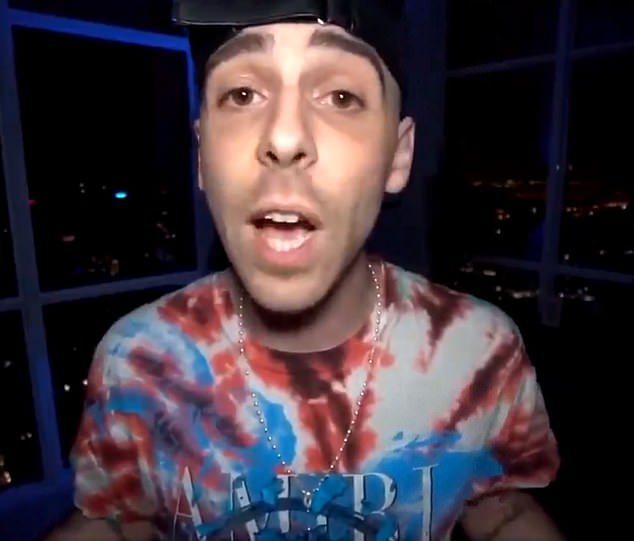 Lies: Jason has since deleted the videos and apologized, admitting it was a hoax 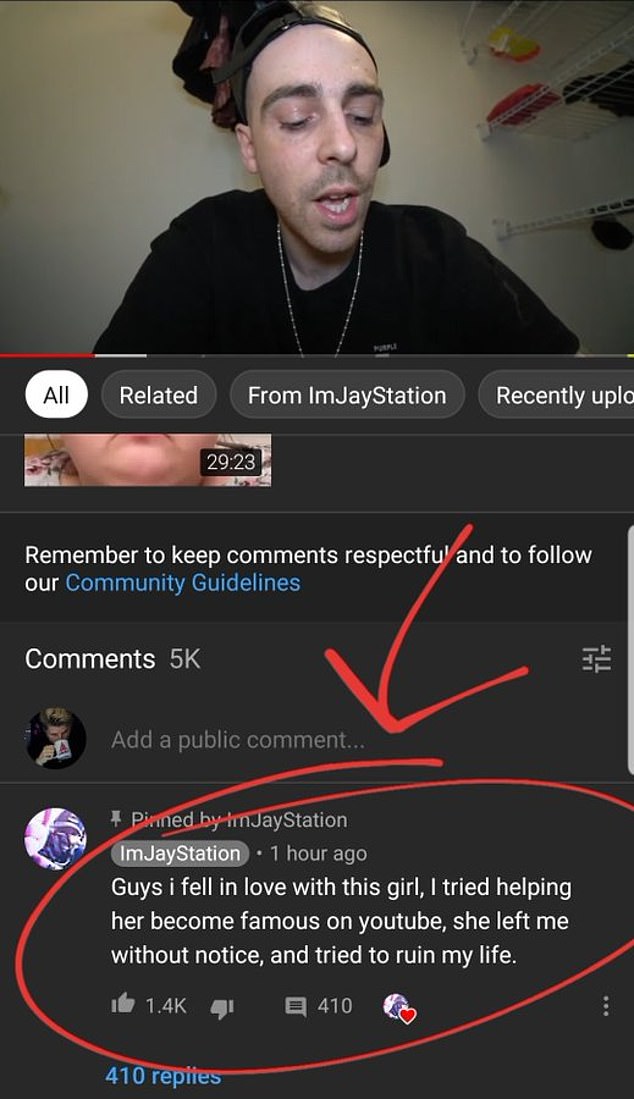 Blame game: Now he’s attacking Alexia, saying he was just trying to help her become famous and now she is trying to ‘ruin’ his life

In his January 26 video, he apologized to Alexia’s parents and cried on camera. He claimed he was trying to ‘help’ Alexia, saying she was at a ‘dead-end job’ before he promoted her on YouTube.

He also insisted that she went along with the prank but is now trying to ‘ruin’ his life.

Later, he claimed that police came to his door, telling him there was a warrant out for his arrest ‘for assault with a weapon and assault.’

‘I never hit a woman in my life,’ he responded. ‘I tried to help her make a career herself, make hundreds of thousands of dollars if not millions… I feel like I’ve been wronged by this so much and don’t deserve to get thrown in jail.’