The ACT’s road to Covid-19 recovery depends on a potential flow of cases into the territory’s main hospital from southern NSW.

The nation’s capital reported 15 new infections on Sunday, with nine of the patients in the community while infectious.

The ACT’s road to Covid-19 recovery depends on a potential flow of cases into the territory’s main hospital from southern NSW, Chief Minister Andrew Barr said

Canberra’s Covid plans are due to be revealed on Tuesday and Mr Barr said NSW’s forecast October spike in case numbers is being taken into account.

‘We have factored in some flow of patients, severely ill patients, into our system,’ he told reporters.

Canberra Hospital acts as a tertiary facility that is relied on by the region, he noted.

‘I have repeatedly asked the NSW premier for assurances in relation to the state’s capacity to look after their own (patients) as much as possible,’ Mr Barr said.

‘But our planning does have to factor in there being some transfer from Queanbeyan Hospital (and) some of the other smaller regional hospitals, into our system.’

The ACT’s latest infection figures mean there have been 493 cases in the current outbreak, with 239 still active. 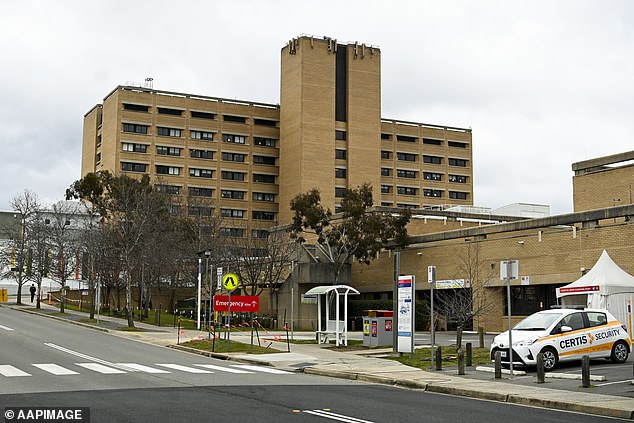 The nation’s capital reported 15 new infections on Sunday, with nine of the patients in the community while infectious (pictured is Canberra Hospital)

Eight of the latest cases are linked to known sources and six of those are ‘household contacts’.

Among the latest case count is a prisoner at the Alexander Maconochie Centre, the territory’s only adult prison.

‘He is comfortable and being isolated on site,’ ACT Chief Health Officer Kerryn Coleman said on Sunday.

As a result of his diagnosis, three other prisoners and one officer are in isolation pending test results. 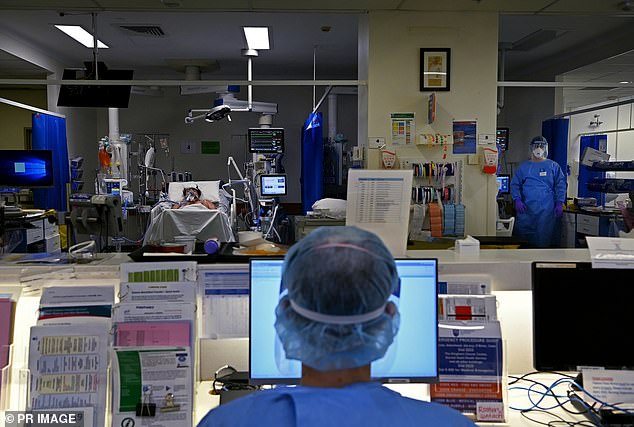 On Sunday the nation’s capital recorded 15 new cases of coronavirus, with nine of those being infectious in the community (pictured, ICU staff caring for Covid-19 patients)

There were 2406 Covid tests conducted on Saturday, which Mr Barr said was not good enough.

More than 75 per cent of the ACT’s eligible population has received at least one vaccination dose and nearly 52 per cent are fully vaccinated.

Mr Barr went to great lengths to explain that the national Covid plan relies on all jurisdictions reaching a vaccination rate of at least 70 per cent.

And while the ACT and NSW are on track to get there first, the easing of nationwide restrictions relied on all states and territories achieving the benchmark.