Three children in the same town have been diagnosed with an incurable child brain tumor and parents can’t help but ask why.

Ocean Springs, a small town populated with less than 18,000 people, has been blighted by Hurricane Katrina and the Deepwater Horizon oil spill.

Parents are now questioning if these environmental factors led to a cancer cluster for the three children with diffuse intrinsic pontine glioma (DIPG), a brain tumor that has no known survivors.

Cancer clusters form in areas polluted with toxic chemicals, but one of the children was diagnosed before the spill making the cause a mystery.

And yet, this tumor impacts only 300 to 400 children a year in the United States – making Ocean Springs’ rare surge in cases highly unusual.

Sophia Myers, the most recent child to be diagnosed, first experienced unexplained vomiting and wobbly walking before her doctors found the terminal brain tumor.

The disease, which kills 90 percent of its victims within 18 months, has left the seven-year-old in hospice care after radiation and steroids failed to slow the growth of the deadly tumor.

Heart-breaking: Sophia Myers, seven, was diagnosed with diffuse intrinsic pontine glioma in February of this year. Before she was diagnosed, Sophia loved to dance and be active. Now the incurable brain tumor has left her unable to walk as her family prepares for her to die 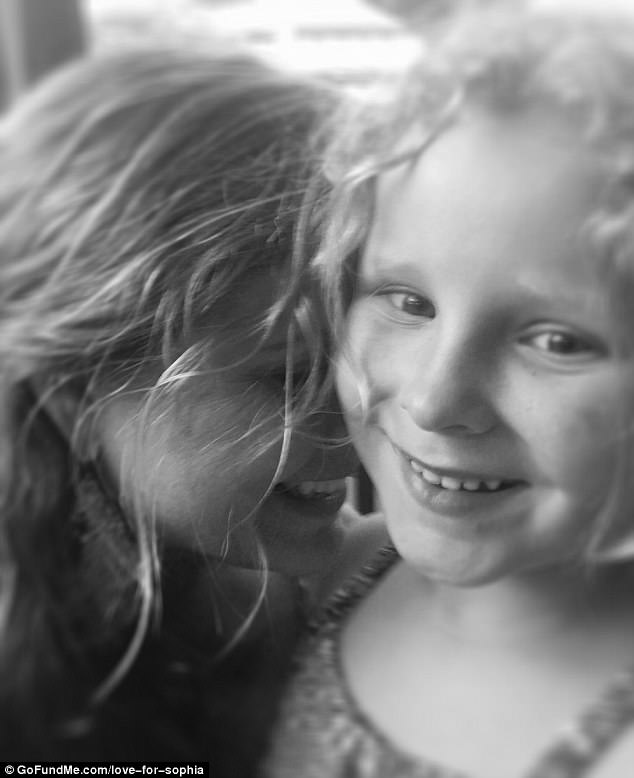 Angel Myers (left) said she fell to the floor after her daughter was diagnosed with cancer. She’s watched her child lose her ability to walk and move while the tumor spreads through the brain

The seven-year-old dancer whose time is running out

Angel Myers, Sophia’s mother, told the Sun Herald that she fell to the floor after her daughter was diagnosed with DIPG.

The doctors informed the family that Sophia only had nine to 12 months to live because the inoperable brain tumor would only keep spreading.

DIPG is an aggressive tumor that is found at the base of the brain.

It forms in the glial tissue, which is responsible for supporting and protecting the brain’s neurons.

A Diffuse intrinsic pontine glioma (DIPG) is a rare an inoperable type of brain tumor.

It mostly affects children, with most diagnoses occurring between four and 11 years of age. More than 90 percent of its victims will die within 18 months of diagnosis.

Each year, there are around 100 to 150 new diagnoses in the United States.

The cause of the tumor remains unknown.

Radiation can briefly halt the spread of the tumor for an average of six to nine months, but there is no cure.

Sophia went through radiation treatment in an attempt to hinder the spread of the cancerous cells.

She also took steroids to relieve the pressure that was building in her brain from the tumor.

But these steroids had an adverse effect on her body and caused her face to swell.

Her mother said her daughter also experienced an increase in rage because of the medication.

‘I hate cancer,’ Angel Myers said to the Sun Herald.

‘I hate it. I hate steroids. I hate what they have done to my child. I hate what has become of her life, our lives – existing minute by minute on a roller coaster that is so fast and violent and unexpected, just functioning not living.’

Despite the radiation and steroids, the disease has spread in Sophia’s brain and robbed her of her ability to walk.

The former dancer is now bound to a bed or chair because her body is stiff and numb.

The disease, on average, occurs in children aged four to 11.

Sophia was moved to hospice care where she is being kept comfortable while her parents continue to search for a miracle cure.

Angel said in a Facebook post that the family has already started looking into funeral plans as they prepare for Sophia’s death.

But she still holds onto hope that her daughter could be the one who survives the terminal disease.

I hate what has become of her life, our lives – existing minute by minute on a roller coaster that is so fast and violent and unexpected, just functioning not living

‘I am still begging God for a miracle,’ Angel said in the post. ‘Please God. So many people are following Sophia. It’s unbelievable.’

She said the one healthy part of her daughter left is her eyes. That is where she still sees what her daughter used to be before the cancer took over her brain.

‘For the most part, her eyes are what we have left of our healthy girl,’ Angel said. ‘Her eyes, so genuine and pure, are our Sophia.’

A family friend started a GoFundMe page to raise awareness for pediatric cancer and also to help pay for all of Sophia’s treatment.

Sophia Mohler was the first known child to be diagnosed with DIPG in Ocean Springs, Mississippi.

She was diagnosed in 2009 at seven years old after her parents noticed subtle changes to her health and behavior.

Her eyes began to shift, so doctors recommended for Sophia to get glasses in order to correct them.

She got an MRI after the glasses were unable to correct her eyes which revealed she had the deadly brain cancer.

Sophia went through radiation, oral chemotherapy and clinical trial drugs in an attempt to stop the progression of the disease. 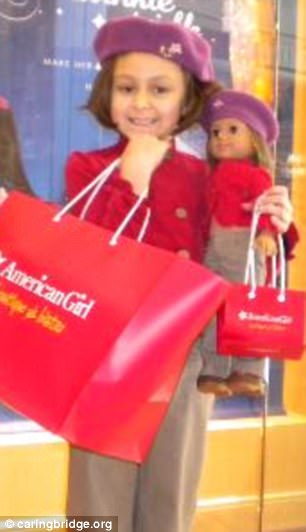 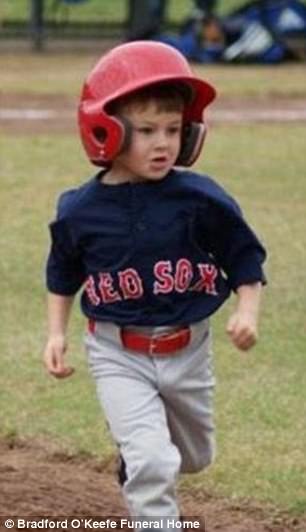 Sophia Mohler (left) and Jaxon Schoenberg (right) were the first two children from Ocean Springs, Mississippi, who were diagnosed with DIPG. The town has less than 18,000 people, so it is incredibly rare that this terminal brain tumor has appeared in three children in eight years 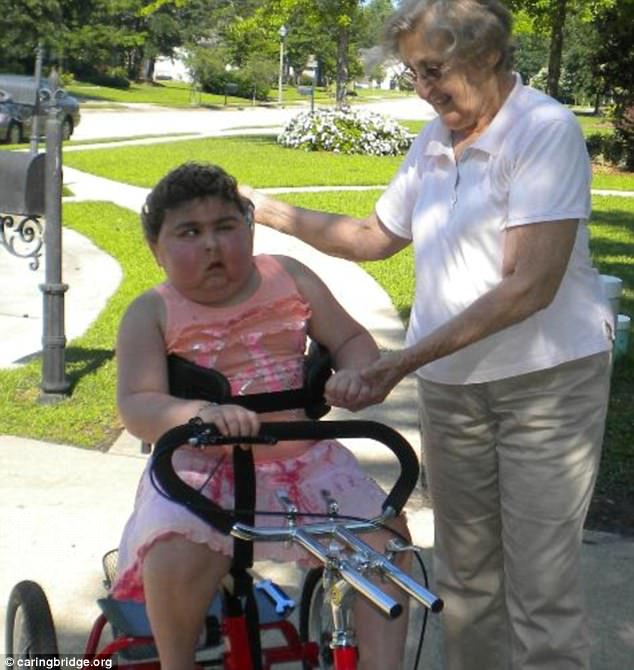 The treatment left Sophia Mohler’s face swollen because of the drugs she was taking. This side effect also happened with Sophia Myers. While the drugs cause adverse effects, they are necessary for children with DIPG to help diffuse the pressure in the brain from the tumor

Radiation therapy has been the most effective treatment on DIPG cases to help slow down the spread of the tumor, but it isn’t a cure.

Sophia died one year after her terminal diagnosis.

Jaxon Schoenberg was diagnosed after Sophia Mohler in 2014 when he was six years old.

His parents described him as a sports enthusiast who had a love for life.

”Jaxon was just so alive,’ said his mother, Salena Schoenberger, to the Sun Herald.

His parents also sent him to get radiation treatment, chemotherapy and to undergo clinical trials. But he died eight months later just short of his seventh birthday.

Sophia Myers, Sophia Mohler and Jaxon Schoenberg all live in the same town of close to 18,000 people, which forced people to question how a rare cancer became prominent in their society.

Could location be the cause for this outbreak?

It is currently unknown how this rare brain cancer develops in children.

While there has been no known environmental links to connect why children are developing it, these links also can’t be ruled out.

Jackson County, which Ocean Springs resides in, has been devastated with both Hurricane Katrina and the Deepwater Horizon oil spill.

We are in a small area. We are industrial. We’ve had the BP oil spill. We’ve had (Hurricane) Katrina. Why have three of our children gotten one of the deadliest and rarest diseases? Why is this happening?

Natural disasters such as hurricanes have been proven to impact people long-term with the type of bacteria and disease that populates the waters left behind.

Cancer-causing chemicals can leak into the water supply of areas that are impacted by serious storms such as Hurricane Katrina.

These cancerous chemicals can infiltrate the body through ingestion or mere contact.

Although there hasn’t been any confirmation that the cause could be the hurricane, parents aren’t ruling it out.

‘We are in a small area. We are industrial. We’ve had the BP oil spill. We’ve had (Hurricane) Katrina,’ Angel said. ‘Why have three of our children gotten one of the deadliest and rarest diseases? Why is this happening?’

Sophia Mohler died before the Deepwater Horizon oil spill, but Jaxon and Sophia Myers could’ve been impacted by the disastrous event.

A BP Deepwater Horizon oil rig exploded off the Gulf Coast on April 20, 2010, and dumped millions of gallons into the water.

Areas such as Ocean Springs were impacted by the oil spill because of the dangerous chemicals left behind after an extensive clean up.

An estimated 200,000 people have reached a settlement with the company due to adverse health effects in the brain, lungs, liver and kidneys.

These environmental factors can lead to what is known as a ‘cancer cluster’.

Cancer clusters form in environments that have been impacted by dangerous chemicals.

A recent suspected cancer cluster formed in Cincinnati from a polluted creek. Six cops have been killed in the last two years, which as sparked a debate on if the creek could be the cause.

Ocean Springs has yet to name an environmental factor to cause the rise in cancer cases, but residents haven’t ruled one out.