The footy WAG accused of faking pregnancies and cancer dreamed of a career in sport as a teenager before going on to date NRL star Josh Reynolds, who she now alleges assaulted her.

Arabella del Bussos, 30, whose real name is Donna Preusker, is accused of conning the Wests Tigers playmaker out of thousands of dollars and tricking him into thinking she miscarried their unborn twins.

But before she became a glamour model and rugby league WAG, del Bussos was an awkward-looking teen with ambitions to work as a sports masseuse.

Photos have emerged showing the barely-recognisable 17-year-old with braces while wearing a Lonsdale jumper.

The picture was taken when she began an internship with the AFL in 2008 after graduating Year 12 at Traralgon College in rural Victoria. 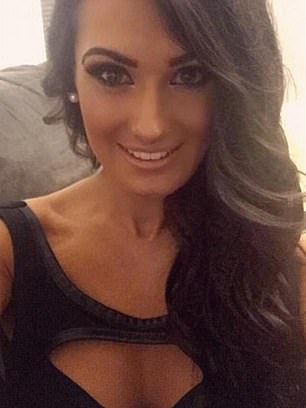 Arabella del Bussos, 30, whose real name is Donna Preusker, is accused of conning the Wests Tigers playmaker out of thousands of dollars and tricking him into thinking she miscarried their unborn twins

The young del Bussos spoke candidly of her career aspirations to the Churchill and District News in 2008.

‘This traineeship has given me the opportunity to develop my skills in a fantastic organisation,’ she told the local newspaper.

While interning at Kurnai Precinct Campus, del Bussos, or Donna Preusker as she was known at the time, was completing a Certificate 3 in Sport and Recreation.

The teenager said she hoped to gain knowledge and experience and ‘use it to her advantage’.

‘Donna’ ultimately got her long-awaited foray into the sporting world in September 2018 when she messaged Reynolds on Instagram. 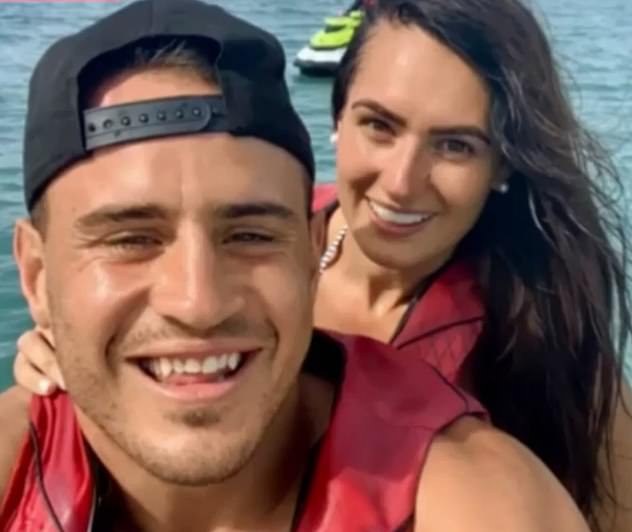 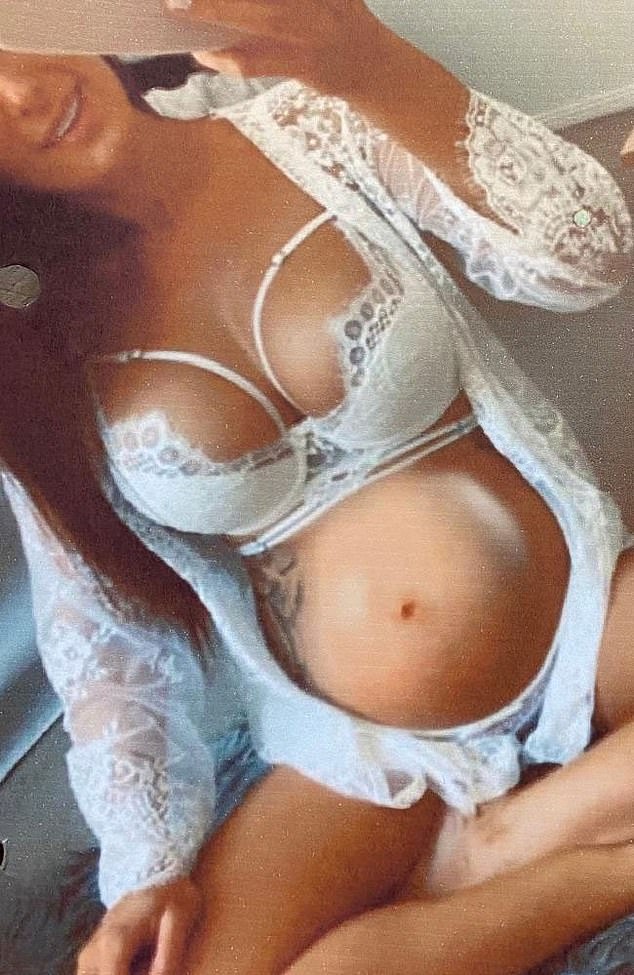 The star’s legal team will allege the 29-year-old digitally altered photos of herself to appear pregnant, and even went as far to inject herself with fertility drugs to pull off the ruse. Pictured: Del Busso during her supposed pregnancy

But after a turbulent one-year relationship, del Bussos is now accusing the 30-year-old of assaulting her, allegedly leaving her with bruised arms and legs during an incident which was partly filmed last September, allegations which he denies.

But Reynolds will allege his model ex conned him out of thousands of dollars, feigned three pregnancies and doctored photos of herself to make him believe she was expecting.

A text message allegedly sent by Ms Del Busso’s relative emerged earlier this week, urging friends to make a ‘small contribution’ towards a pamper day of beauty treatments to help to ‘take her mind off things’.

‘To Bella’s beloved friends, it’s her [relative] here as we all know bella is going through quite a tough time at the moment, since loosing (sic) her father at a young age, loosing (sic) a set of twins and now the loss of her mum … lets just say it’s not easy for her at the ­moment!’ one text message obtained by The Sunday Telegraph starts.

‘The pain she is enduring is just heart breaking, as we know bella is forever thinking about everyone else and is very giving so I thought well let’s try and take her mind of (sic) things, give back to her and let her have a pamper day (facial, massage, pedicure, manicure).

But del Busso’s mum Isobel Preusker is in fact still alive and broke her silence last week, telling Nine News her daughter ‘needs to be stopped.’

Ms Preusker claimed her daughter has even used nine different aliases over the years.

It’s understood Reynolds’ legal team will allege the bank account included in the text message is linked to del Busso. 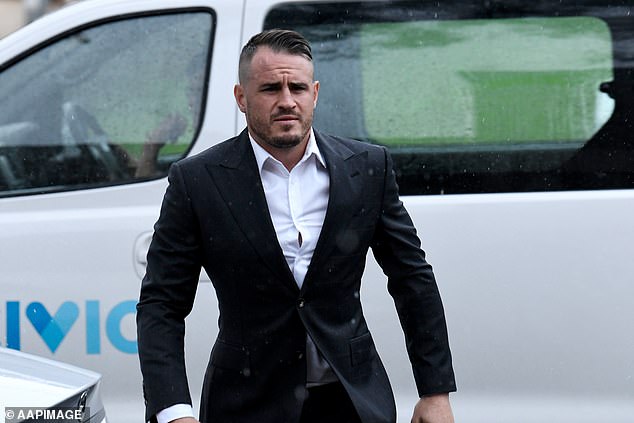 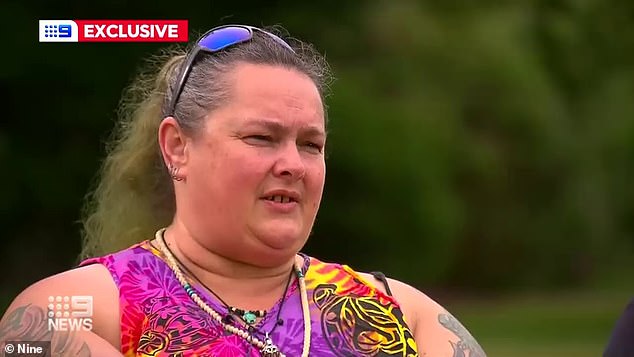 It did not show any assault by the playmaker towards her.

Reynolds pleaded not guilty to the assault charge. Despite the court proceedings, the NRL has decided Reynolds won’t be stood down.

It will be alleged in court Del Busso faked three pregnancies, lied about her mother’s death and claimed she had cancer to dupe him and other former boyfriends into giving her money.

Reynolds’ lawyers will allege she only filed her domestic violence complaint after she learned of his decision to tell police about her alleged deceit.

His legal team will allege Del Busso digitally altered photos of herself to appear pregnant, and even went as far to inject herself with fertility drugs to pull off the ruse.

Arabella Del Busso was revealed to be the woman Josh Reynolds verbally abuses in the clip that viral last month.

The shirtless Wests Tigers playmaker, 30, was seen yelling at a woman sitting on his bed, in leaked footage.

Del Busso has denied that it is her in the video although her cavoodle named ‘Meatballs’ is present on the bed. 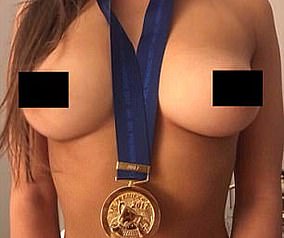 The release of the clip and an ongoing court case about claims Reynolds’ assaulted Del Busso have put his playing career in jeopardy.

Meanwhile, people who know the footballer have been surprised to learn that Del Busso has previously made headlines over a separate scandal.

Del Busso was wrongly dragged into controversy involving a nude photo and a Richmond Tigers AFL player back in 2017.

At the time, she said she had been bombarded with messages asking if it was her in a photo with a premiership medallion draped around her neck.

‘I’ve had so many people contact me asking if it is me,’ she told Daily Mail Australia at the time.

‘I can assure you I am obviously not the woman with the medallion around my neck.’

She joked: ‘If anything, my breasts are better than that.’

At the time, she owned up to starring in a separate viral photograph showing her nearly naked in front of a Richmond mural for grand final week.

‘It was for my fans and followers,’ she said. 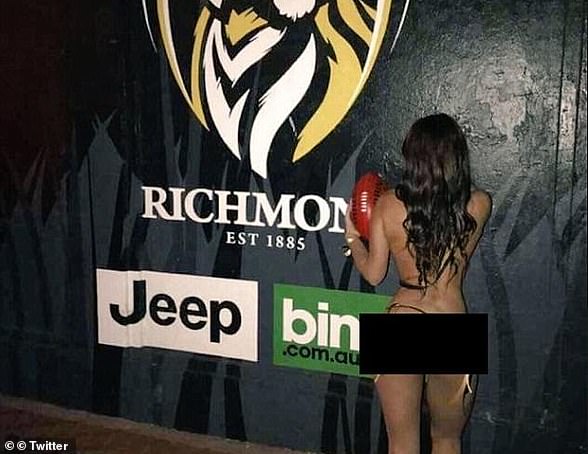