Senator John McCain has acknowledged that his current political term will be his last and says he will ‘hate to leave’ the world as he continues his battle with brain cancer.

The 81-year-old Arizona senator made the remarks in his new book, which he penned while coping with the stage 4 cancer.

‘This is my last term,’ McCain wrote in The Restless Wave, according to an excerpt published by Apple News on Monday.

‘If I hadn’t admitted that to myself before this summer, a stage 4 cancer diagnosis acts as ungentle persuasion.’

He went on to quote his hero Robert Jordan who once wrote: ‘The world is a fine place and worth the fighting for and I hate very much to leave it’ in his book For Whom the Bell Tolls.

In response to the quote, McCain said: ‘And I do, too. I hate to leave it. But I don’t have a complaint. Not one. It’s been quite a ride. I’ve known great passions, seen amazing wonders, fought in a war, and helped make a peace. I made a small place for myself in the story of America and the history of my times.’

McCain said his battle with cancer meant he could now freely speak his mind about the current political climate, especially given this would be his last term.

‘I’m freer than colleagues who will face the voters again. I can speak my mind without fearing the consequences much. And I can vote my conscience without worry,’ he wrote.

‘I don’t think I’m free to disregard my constituents’ wishes, far from it. I don’t feel excused from keeping pledges I made. Nor do I wish to harm my party’s prospects. But I do feel a pressing responsibility to give Americans my best judgment.’ 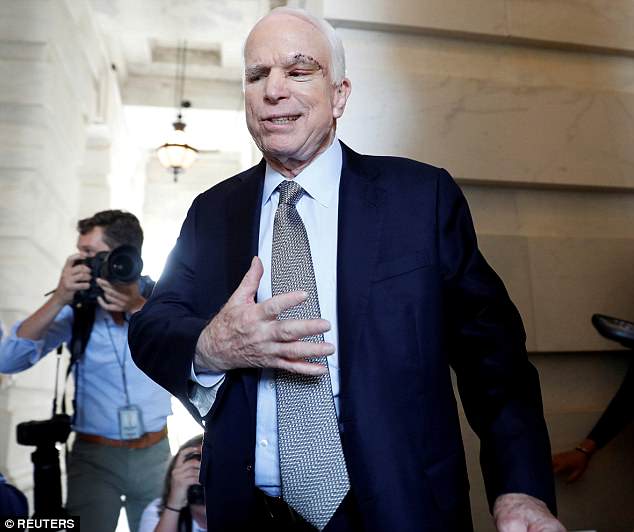 McCain revealed in July last year that he had a cancerous brain tumor after undergoing a procedure to remove a blood clot from his left eye. He is pictured above returning to Senate to vote on health care legislation soon after his diagnosis 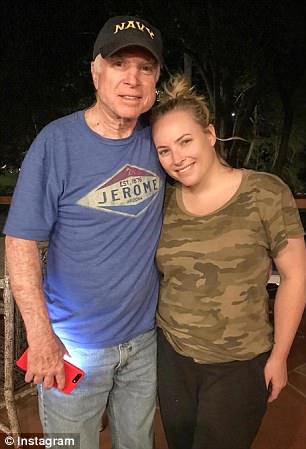 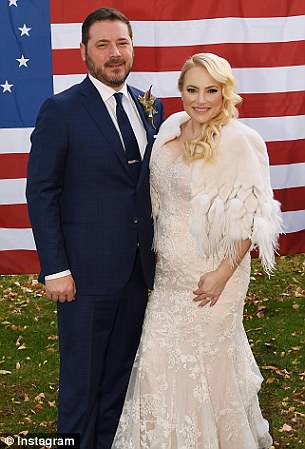 John McCain’s son-in-law Ben Domenech tweeted on Saturday that the senator had asked him to take care of his daughter Meghan, sparking public concern over the 81-year-old’s health

His book also refers to the fact that he has been in Congress for 36 years and served alongside six presidents.

‘I’ve disagreed, sometimes too heatedly, with all of them,’ McCain writes. 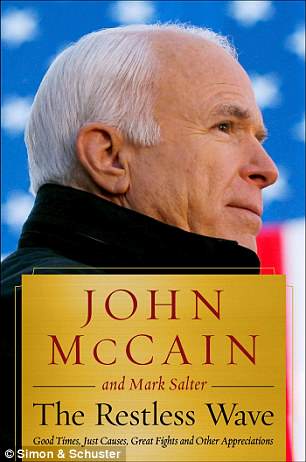 McCain’s book, which he penned while coping with the stage 4 cancer, will be released on May 22

Specifically regarding President Donald Trump, McCain said: ‘He has declined to distinguish the actions of our government from the crimes of despotic ones.

He said politicians and the rest of America needed to learn how to disagree without personal attacks.

‘Whether we think each other write or wrong on the issues of the day, we owe each other respect,’ he said.

‘Before I leave I’d like to see our politics begin to return to the purposes and practices that distinguish our history from the history of other nations. I would like to see us recover our sense that we are more alike than different.

‘We are citizens of a republic made of shared ideals forged in a new world to replace the tribal enmities that tormented the old one. Even in times of political turmoil such as these, we share that awesome heritage and the responsibility to embrace it.’ 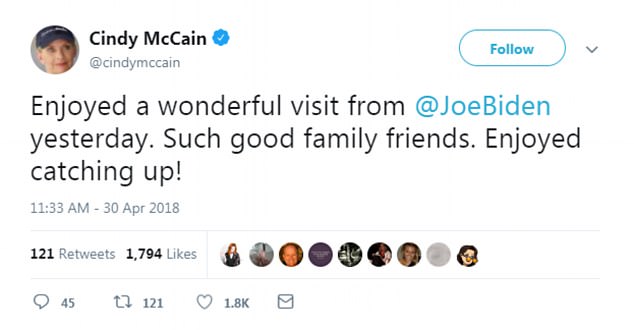 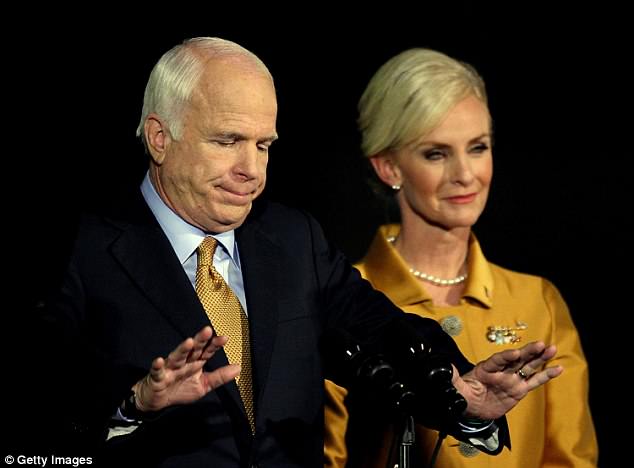 McCain (above with wife Cindy in 2008) said his battle with cancer meant he could now freely speak his mind about the current political climate, especially given this would be his last term

The release of the excerpt came after his son-in-law Ben Domenech, who is married to Meghan McCain, caused a stir when he posted a cryptic tweet on Saturday saying the senator had asked him to take care of his daughter.

‘John hugged me tonight. He asked me to take care of Meghan. I said I would,’ Domenech, a conservative pundit, tweeted before quickly deleting it.

The senator’s wife Cindy tweeted on Monday that they had enjoyed a visit from former Vice President Joe Biden over the weekend.

McCain was hospitalized earlier this month for an intestinal infection.

In July 2017, McCain revealed that he had undergone a procedure to remove a blood clot from above his left eye at the Mayo Clinic in Phoenix.

After testing the removed tissue, it was determined that McCain had glioblastoma, a cancerous brain tumor.

The senator has undergone radiation and chemotherapy treatment, while still performing his senatorial duties.

He has been recovering at his home since late 2017 and, according to his office, he has been enjoying ‘frequent visits from his family, friends, staff and Senate colleagues.’