Cancer-stricken mother ballooned from a size 12 to a 22

A cancer-stricken mother who was so bloated from the disease she ballooned from a size 12 to a 22 in just 10 days has now framed the ‘big knickers’ she had to buy to cover her swollen frame.

They are hanging in pride of place in her home in Romford, Essex, alongside a photo of her distended stomach.

Doctors had to drain 17 litres of fluid from the 52-year-old’s stomach before they could perform a biopsy.

She said: ‘I was so bloated that none of my clothes would fit. ‘I’m not very tall either, so I looked like a Weeble, those toys from the 1970s that wobble but don’t fall down.

‘I kept having to get my husband Glenn to go back to Sainsbury’s for me most evenings to get me more, bigger knickers.

‘They’re a reminder of what I’ve been through and how I’ve tried to tackle it all, with the best attitude I can.’

Helen Heagren, from Romford, Essex, says the size 22 knickers are a reminder of what she’s been through 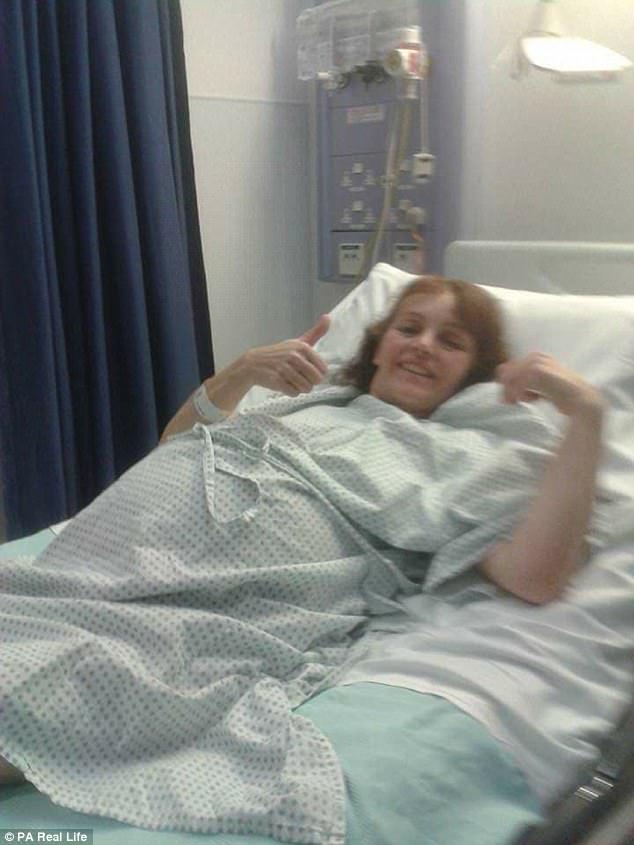 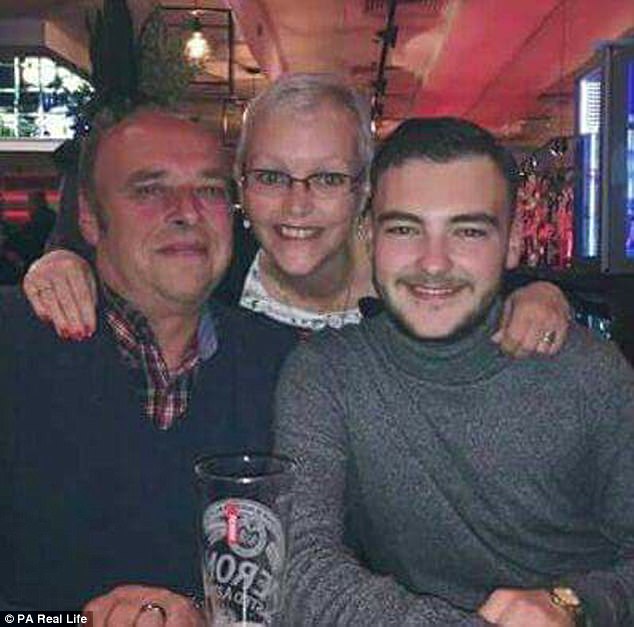 The 52-year-old, pictured with her husband Glenn, left, and son Jordan, right

‘I was absolutely huge and exhausted’

In the year before her diagnosis in January 2016, Mrs Heagren, mother to Jordan, 20, and stepmother to Jamie, 32, had worked hard to lose weight, slimming down from a size 16 to a svelte size 12.

But, despite her intensive sessions at the gym to tone her petite 9 stone frame, there was a small pouch of fat she could not shift.

Then, one day during a dance class in October 2015, she felt a lump in her stomach move. 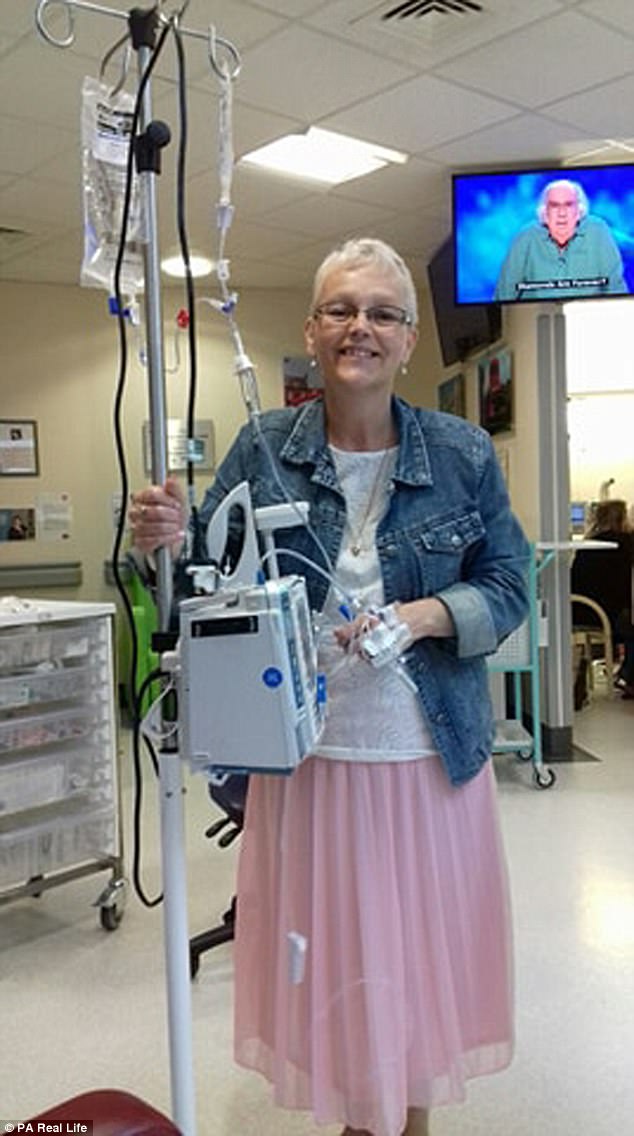 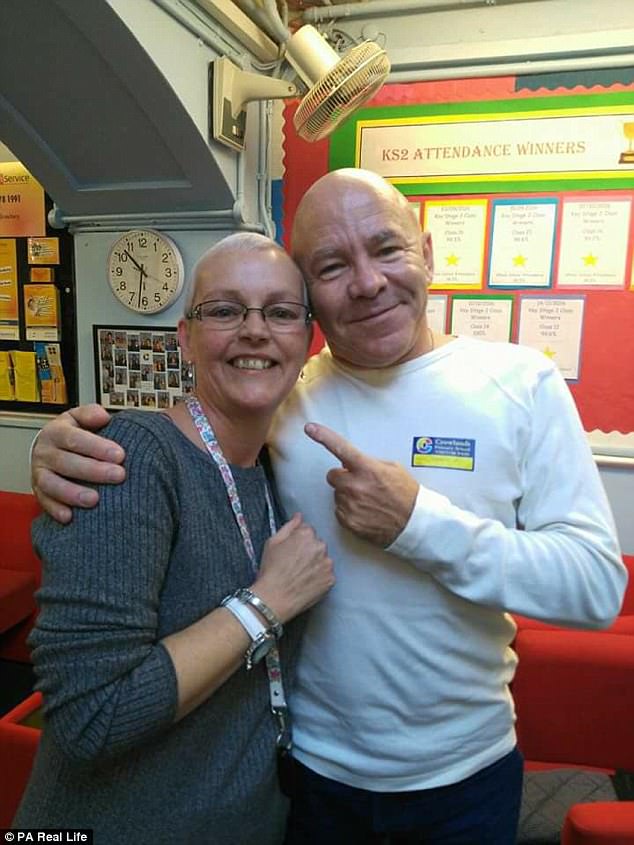 ‘I said to the instructor, “Can we do that move again?” as I wanted to make sure, and I felt something move for a second time … and a third,’ said Mrs Heagren.

‘I felt uneasy and it kept playing on my mind, so I made an appointment to see my GP.’

After examining her, Mrs Heagren’s doctor thought the lump could be a simple cyst, but referred her for an ultrasound at Queen’s Hospital in Romford just to be sure.

Noticing a worrying mass during the scan, medics wanted to perform a biopsy – but there was too much fluid in her stomach for them to do so.

Before they could proceed, she needed 17 litres of fluid to be drained from her stomach over two separate procedures, and was fitted with a permanent drain.

‘I went from a size 12 to a 22 in 10 days. I could barely walk – I was absolutely huge and exhausted, from carrying all that weight around,’ she said.

‘I’m not very tall either, so I looked like a Weeble, those toys from the 1970s that wobble but don’t fall down.’ 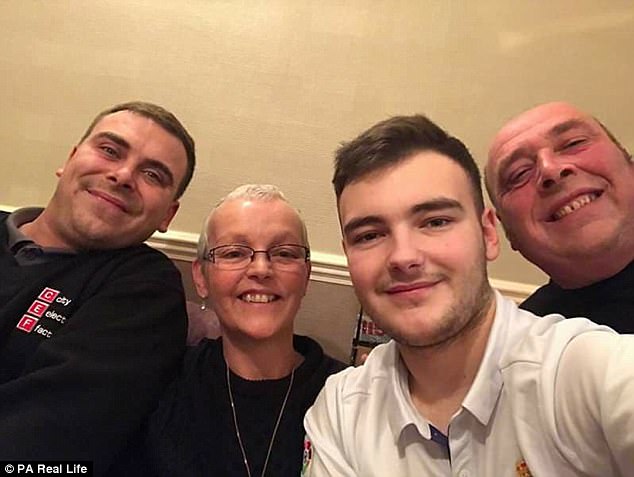 Mrs Heagren is determined to make the best of her time left. She is shown here with her stepson Jamie, son Jordan and husband Glenn (left to right) 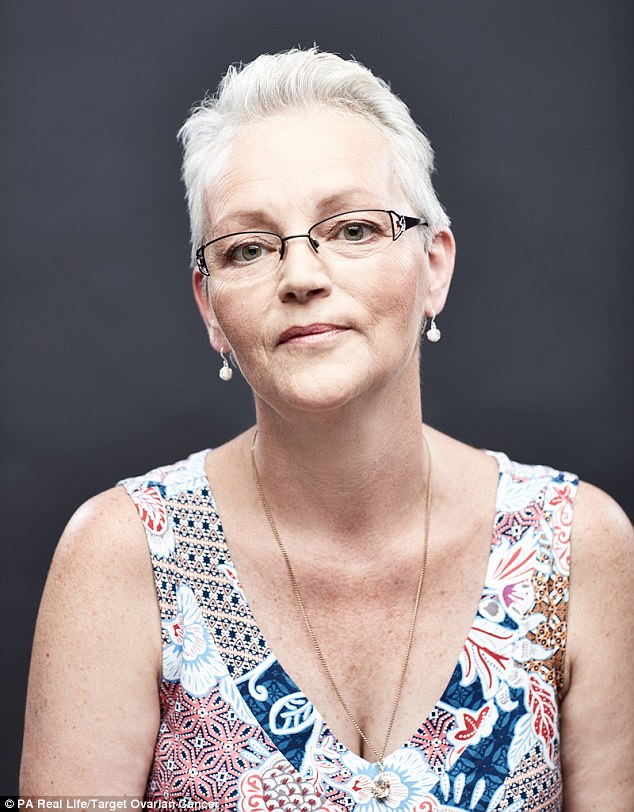 THE SYMPTOMS OF OVARIAN CANCER

Other symptoms can include:

It’s unlikely you have cancer, but it’s best to check. Your GP can do some simple tests.

Eventually, enough fluid had been drained for the biopsy to go ahead, which revealed that Mrs Heagren had stage IV cancer.

She said: ‘I was sat in a private room with Glenn when the doctors told us. I just said, “Okay, so what are we dealing with? Am I going home to plan for the end of my life, or is this treatable?”

‘To this day, Glenn is amazed by how matter-of-fact I was. But what else can you do?’

From there, Mrs Heagren had three cycles of chemotherapy, before having a hysterectomy at the Royal London Hospital.

Next, she had more chemotherapy, followed by a course of cancer treatment drug Avastin – an antibody drug that she has campaigned to make available to everyone, rather than just those who qualify through the Cancer Drugs Fund, alongside charity Target Ovarian Cancer.

Battling on through humour

Recalling her first chemotherapy session, Mrs Heagren said: ‘I’m not the quietest person – I never have been and I never will be – but even for me, it was chaos.

‘I got shooting pins and needles in my bottom when they did the steroid injections. I was jumping around, shrieking about that, when I accidentally pulled out my stomach drain and spilled fluid everywhere.

‘Then, to top it off, I accidentally started wheeling another man’s trolley to the toilet with me.

‘I was so embarrassed, but a lady came up to me afterwards and said I’d really broken the ice and given everyone a good laugh.’ 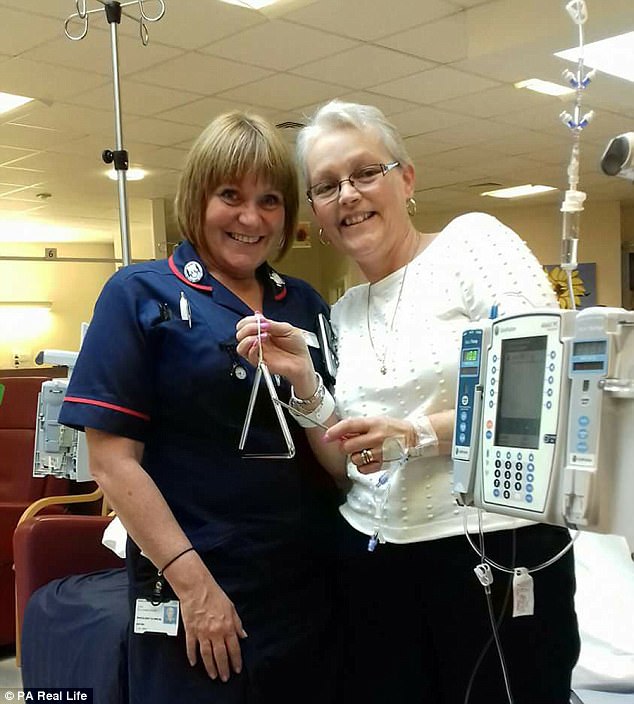 Mrs Heagren likes to keep things light hearted, she is pictured her joking around with cancer nurse Tina 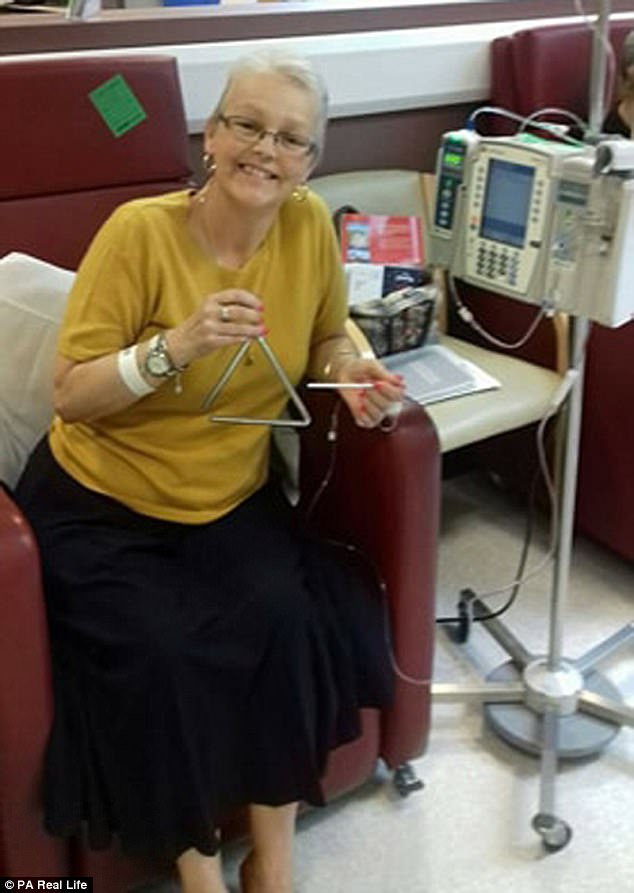 She takes a triangle instrument with her everywhere she goes, posing with it alongside celebrities

Throughout her battle, Mrs Heagren has tried to tackle everything with a dose of humour, from framing her pants to nicknaming her chemotherapy trolley Anton, after Strictly’s Anton du Beke, as she thought of it as her ‘dance partner.’

She has also taken a triangle instrument with her everywhere she goes, posing with it alongside celebrities.

Her ultimate aim is to get a snap with footballer David Beckham.

‘While I can keep going, keep working, I will’

For 10 weeks last summer, her positive attitude paid off, as she was happily in remission.

But then, a routine scan – the results of which were delayed after NHS systems were hacked in May last year – revealed the cancer had returned and spread to her stomach.

Though it is now incurable, she is determined not to let it break her spirit.

Now having chemotherapy every four weeks, she said: ‘You’ve just got to get on with it and take each day as it comes. 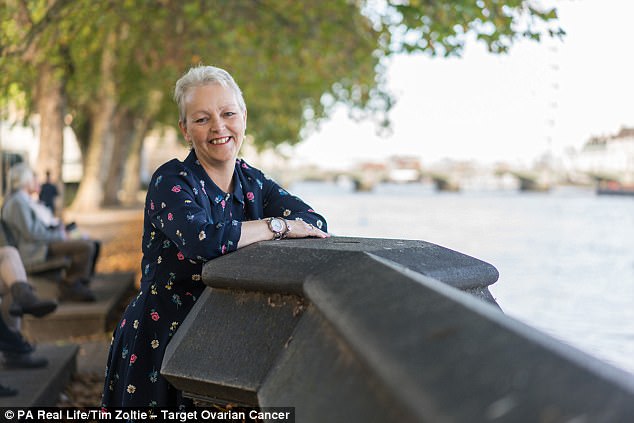 ‘I don’t ask too much about the medical side of things. I worried that might make me ignorant, as I see some patients who know every single thing that’s happening – every scan, every blood test – and what it all means.

‘But, for me, I’d rather not know. It helps me to have a better outlook. I just judge it all on what I feel well enough to do and, while I can keep going, keep working, I absolutely will.’

Mrs Heagren is also being supported by Target Ovarian Cancer, and is sharing her story to help raise awareness of the symptoms to look out for, including bloating, changes in bowel or urinary habits, unexplained weight loss, pelvic pain and extreme fatigues.

She is speaking out as the charity launches its new campaign Take Ovar, which hopes to raise awareness and fund research in order to give women in the UK the best chance of surviving ovarian cancer.

THE TOLL OF THE CYBER ATTACK ON THE NHS

More than a third of hospital trusts had their systems crippled in the WannaCry ransomware attack in May.

Nearly 20,000 hospital appointments were cancelled because the NHS failed to provide basic security against cyber attackers.

NHS officials said 47 trusts had been affected – but the National Audit Office (NAO) found that the impact was far greater, and in fact 81 were hit by the attack.

NAO said the cyber-attack could have easily been prevented. Officials were warned repeatedly about the WannaCry virus before the attack, with ‘critical alerts’ sent out in March and April.

Computer systems in 150 countries were caught up in the attack, which saw screens freeze with a warning they would not be unlocked unless a ransom was paid.

The Department of Health said that from next January hospitals will be subject to unannounced inspections of IT security.