Cancer sufferer, five, who has always wanted to be a tattoo artist lives out her dream

Leukaemia-stricken girl, five, who has always wanted to be a tattoo artist lives out her dream as inking parlour gives her a one-day apprenticeship

A girl with leukaemia who dreams of becoming a tattoo artist has been able to live out her dream after being given a one-day apprenticeship at a local parlour.

Maja, whose last name is unknown, has acute lymphoblastic leukaemia (ALL). The disease progresses rapidly and aggressively, according to the NHS.

After hearing about her ambitions, a charity arranged for a local tattoo parlour to set up a one-day apprenticeship for her.

The youngster, from Cleveland in Ohio, was shown how to use all the tools, given a tour of the inks and practiced tattooing her name on a grapefruit.

She ended the day by drawing a panda template, which a professional then tattooed on her parents in front of her. 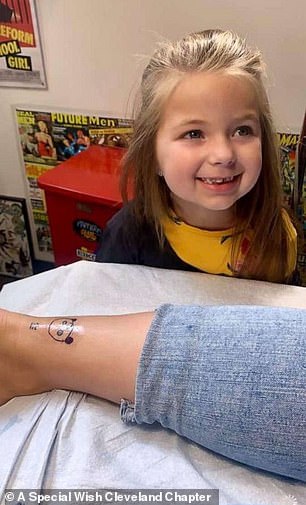 Maja, five, is battling acute lymphoblastic leukaemia. A charity arranged for her to live out her dream of being a tattoo artist. The youngster is pictured left after tattooing her name on a grapefruit and right smiling as her panda design was etched on her mother’s ankle

Before the day out, Maja – whose prognosis is unclear – went out for tacos, where the waitress let her practice her tattooing skills on her arm with a pen.

Once at the tattoo parlour, the youngster met with the different artists. She was given a tour and shown the different bottles of colourful ink they use.

Maja finished the day by working with the team to create her panda design.

She watched as her mother had the sketch etched on her ankle, while her father opted to have the design on his forearm.

A Special Wish spokesperson wrote on Facebook: ‘Thank you to everyone that made this amazing day possible.

‘Something tells us Maja’s Tattoo is going to be very popular at Voodoo Monkey!!’ 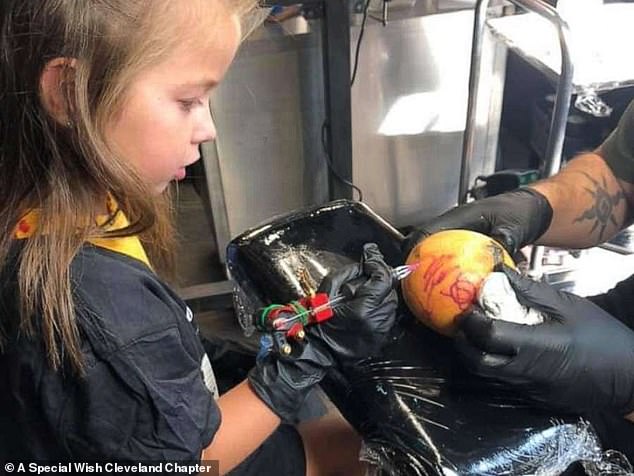 Before tattooing her name on the piece of fruit, Maja was given a tour of a local tattoo parlour

ALL affects the white blood cells, which play a critical role in immunity.

It occurs when large number of white blood cells are released from the bone marrow into the blood before they are fully developed.

The causes the number of red blood cells, which carry oxygen, and platelets, which cause clotting, to go down.

Around 790 new cases of ALL occur every year in the UK, Cancer Research UK statistics show.

In the US, more than 3,000 new cases arise annually, according to the Center for Disease Control and Prevention.