Cancer survivor, 25, to have a pioneering operation to REVERSE her early menopause

A mother left infertile after gruelling chemotherapy is to undergo a revolutionary operation to reverse her menopause.

Adele Stevens will be one of the first in the world to have laparoscopic auto-transplantation, in the hope of restoring her fertility.

The mother-of-one had chemotherapy for Ewing’s sarcoma, a rare form of bone cancer. But the 25-year-old is desperate to have another child.

Ms Stevens, who lives near Reading, had one of her two healthy ovaries removed and frozen in a treatment called ovarian cryopreservation before her chemotherapy began in 2015.

Adele Stevens, 25, will be the one of the first in the world to have ovarian cryopreservation in the hope of restoring her fertility after chemotherapy gave her an early menopause 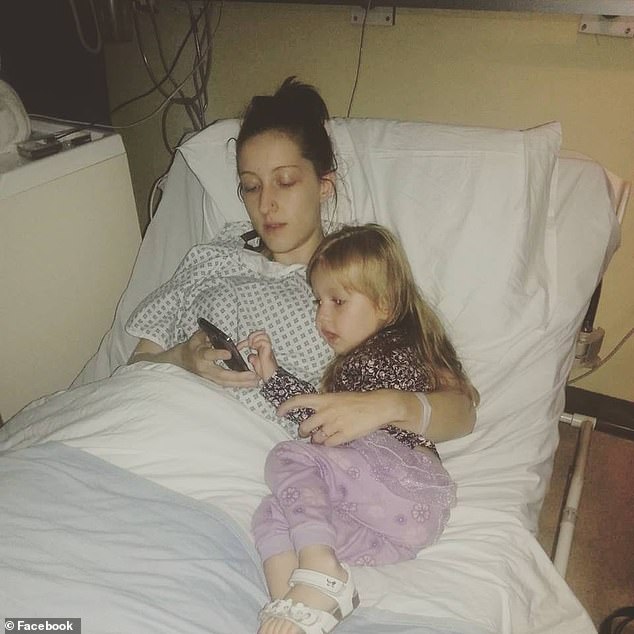 The mother-of-one, Amelia, was diagnosed with Ewing’s sarcoma, a rare form of bone cancer, in 2015. She had an ovary removed and frozen before 14 rounds of chemotherapy

The tissue from the healthy ovary will now be grafted on to her damaged ovary in the revolutionary surgery next month.

The surgery is run by the Oxford Tissue Cryopreservation (OTCP) service, a joint venture between the University of Oxford and the Oxford University Hospitals NHS Foundation Trust.

The service’s clinical director Dr Shelia Lane, of John Radcliffe Hospital in Oxford, said the surgery had a high success rate in trials in other countries.

She said: ‘The ovary starts producing eggs again and gives you back your normal hormone function.

The effect can last ten years.

Ms Stevens already has a daughter called Amelia but dreams of having a baby with her 29-year-old partner Ricky. 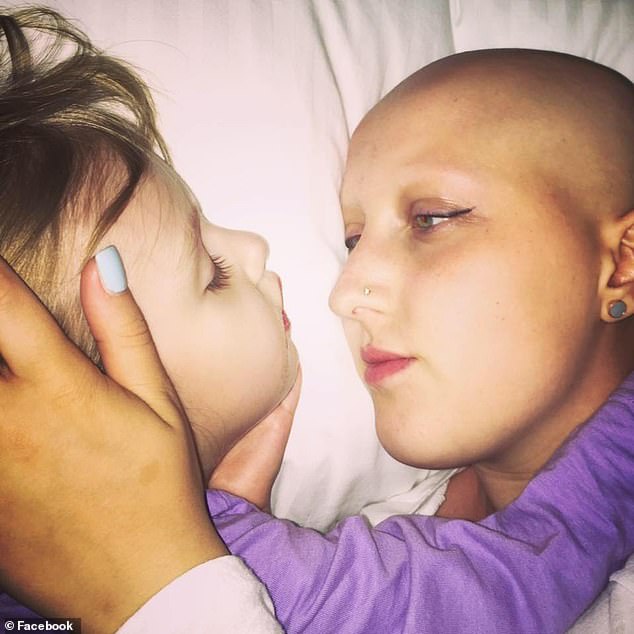 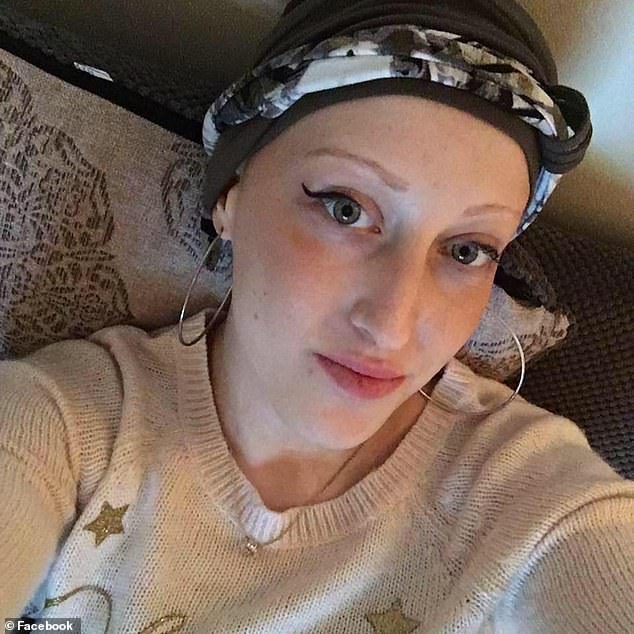 ‘I was only 24 but I had the body of someone in their 50s’ – Ms Stevens, from Reading, said she began to have irregular periods, night sweats and hot flushes during her treatment

Menopause is defined as the changes a woman goes through just before and after she stops her periods and is no longer able to get pregnant naturally.

Some women go through this time with few, if any, symptoms, around 60 percent experience symptoms resulting in behavioral changes and one in four will suffer severely.

In the UK, the average age for a woman to reach the menopause is 51, according to the NHS.

She told The Sun: ‘I’m only the second patient to have it done, so I’m a bit of a guinea pig. But it gives me so much hope.’

Although Ms Stevens says she is the second patient to have the operation, figures show there have been over 50 births recorded from cryopreserved ovarian tissue.

Centres offering the treatment have been running in other countries around the world for at least 15 years.

Research began in the UK in the 1970s, but due to reasons of regulatory constraint, clinical work was stalled.

Two cases have been recorded in the UK since the treatment began to be offered in 2013.

The technology is still new, but experts say the success rate so far is encouraging and in line with other fertility treatments such as IVF.

Ms Stevens was diagnosed with Ewing’s sarcoma in 2015.

It makes up 14% of all diagnoses, according to Sarcoma UK, and there were around 580 new cases of bone sarcoma in the UK in 2014, according to Cancer Research UK.

In the US, about 225 children and teenagers are diagnosed with a Ewing tumor each year.

Ms Stevens had 14 rounds of chemo before flying to the US for 29 days of proton beam therapy – a type of radiotherapy.

This triggered menopausal symptoms more than two decades early, with the mother suffering from hot flushes and mood swings. Women in the UK reach the menopause aged 51, on average, according to the NHS. 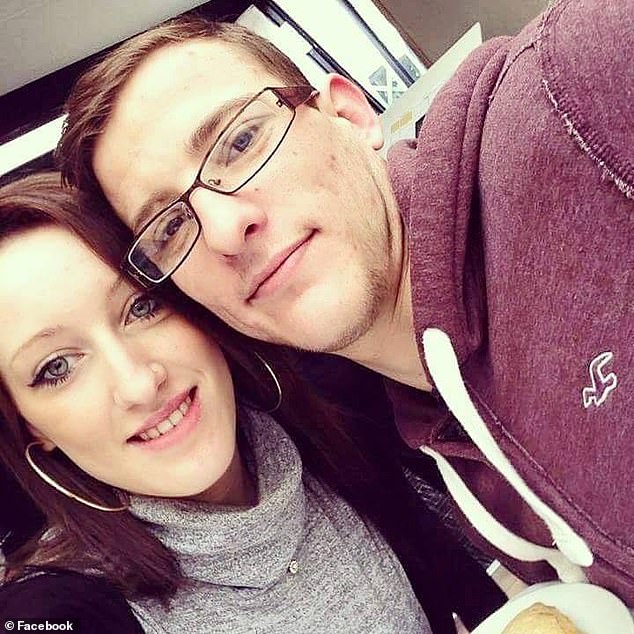 Ms Stevens with her partner, Ricky, 29, who plan to have a child together after the operation

She said: ‘My periods were irregular for a year then I started to have night sweats, hot flushes and hormonal changes.

Now, she has been offered fresh hope of having a baby.

Ten young people under the age of 25 are diagnosed with cancer every day, according to The Future Fertility Trust.

Eight will be cured, and one of these eight will become infertile as a result of their treatment.

Cancer treatments, including chemotherapy and radiotherapy, are widely known to have the potential to affect a woman’s fertility.

Chemotherapy has the ability to stop the body from producing hormones required, while radiotherapy has been found to damage the lining of the womb in some cases.

For young women who have to start treatment urgently, the standard fertility preservation methods of egg and embryo storage are not an option.

In these circumstances, a treatment called ovarian tissue cryopreservation can be offered to protect future fertility.

The average age of a patient to have the Oxford Tissue Cryopreservation (OTCP) service is 12 years old, with the youngest patient being under one.

It is for this reason that the UK is yet to have many cases of the ovarian tissue being put back into the patient.

Dr Lane said: ‘If you are older than 18, and you have at least 2-3 weeks between diagnosis and starting treatment, you may be able to freeze eggs but that will be postcode lottery.’

Ovarian tissue cryopreservation is not yet available on the NHS, but Dr Lane hopes it will be within the next two years.

During the operation, ovarian tissue is removed during a short key-hole operation.

This is immediately transported to a laboratory where it is prepared for freezing in the Tissue Bank freezer.

When the patient wants to restore their fertility, the stored tissue will be implanted in order to restore hormone and egg production.

In the future, a wider range of techniques available, increasing the range of potential options, but the current success rate is encouraging, say experts.

‘Most people who have had childhood cancer will not go on to have relationships or start families because they are sterile’, Dr Lane said. ‘This treatment means they can.’

Ms Stevens’s story will be told on The Truth About Menopause on BBC1 at 9pm tonight.

WHAT IS OVARIAN TISSUE CRYOPRESERVATION?

Ovarian tissue cryopreservation can be offered to protect future fertility of young women who may experience an early menopause due to some cancer treatments.

Ovarian tissue cryopreservation programmes have been running in a number of large centres around the world for at least 15 years. There have been over 50 births recorded from cryopreserved ovarian tissue with normal development during gestation and outcome at birth.

What is the procedure?

When a girl is born all the eggs that she will ever have are stored in the outer layer of the ovary, called the cortex. It is this layer of tissue, containing the immature eggs, that will be stored.

The ultra-low temperature ‘cryogenic’ freezers can safely preserve the hormone function and eggs stored in the ovarian tissue.

Ovarian tissue is collected during a short key-hole operation (laparoscopic oophorectomy) performed under general anaesthetic. During the operation, surgeons will check that both ovaries look normal and then remove one.

The ovary is immediately transported by the Tissue Bank staff to the laboratory where it is prepared for freezing.

The tissue is cut into thin strips and carefully soaked in preservative uid. This protects the tissue when it is cooled very slowly using a computer controlled freezer in order to preserve the tissue structure and function. The ovarian tissue is then stored safely in the Tissue Bank freezer.

If, following treatment, the patient would like to have a baby but has experienced premature ovarian failure, she will need to contact the Oxford Tissue Cryopreservation (OTCP) service.

She will discuss her fertility problems and explore methods to restore her fertility using the tissue held in the Tissue Bank. At present this would involve re-implantation of some of the stored strips of ovarian tissue, in order to restore ovarian hormone function and egg production.