Candice Swanepoel showed off her impressively sculpted physique in a trio of snaps that were shared on Instagram this week.

The 32-year-old Victoria’s Secret Angel was seen relaxing in various tropical settings while modeling several items from her clothing brand, Tropic of C.

The supermodel seems to be looking forward to a newfound freedom as COVID-19 cases fall in the US: ‘The summer we’ve been waiting for is nearly here!’ she wrote in a caption.

Hot stuff! Candice Swanepoel was seen placing her impressively toned body on display in a series of photos that were shared to Instagram over the last few days

In her picture that was posted on Tuesday, Swanepoel was dressed in an eye-catching blue-and-white tie-dye string bikini top that wrapped around her midsection and placed much of her torso on display.

Although she wore a matching lower piece, the South African covered it up with a contrasting red Praia bottom. She added a wide-brimmed sun hat.

In a separate photo, the fashion industry icon wore a Scorpio top in hot pink that was paired with a matching high curve bottom that placed an emphasis on her toned thighs and beautifully tanned legs.

The runway regular’s final shot showed her contrasting a vibrant green background with a burnt orange bikini top and a matching bottom. 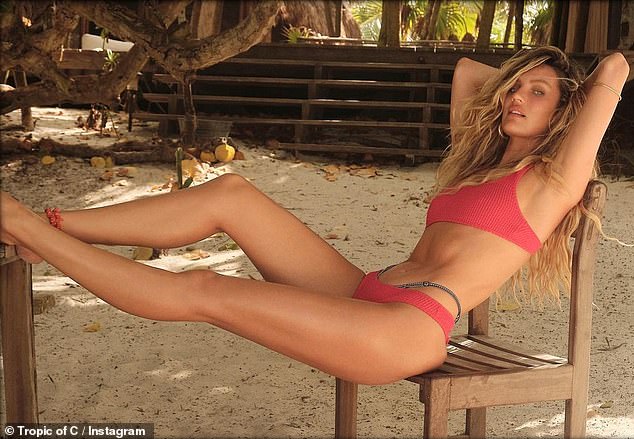 There it is: The Victoria’s Secret Angel’s beautifully tanned body was contrasted by the bright tones of her clothing items 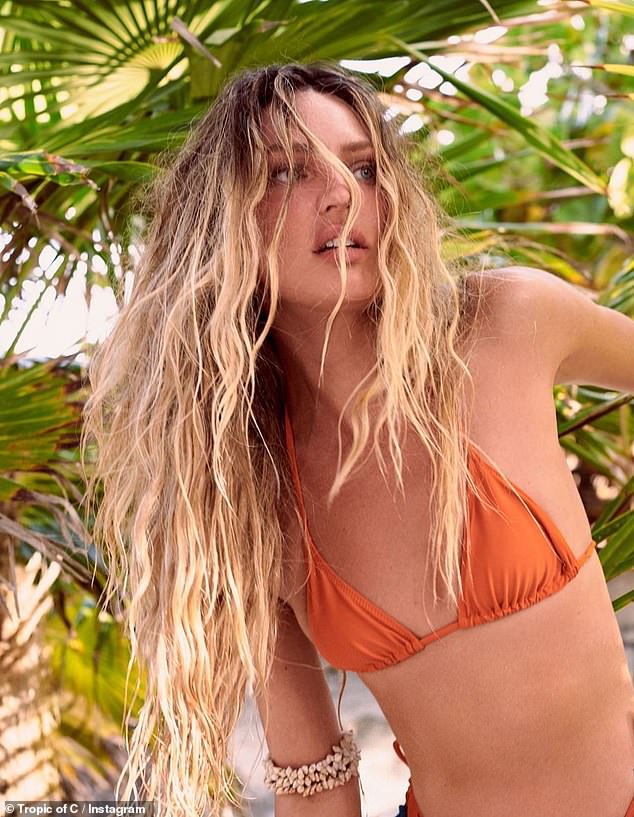 Showing it off: All of the swimwear items that were featured in the shots came from her clothing brand Tropic of C

Swanepoel’s gorgeous blonde hair was prominently displayed in all of her shots, and she accessorized with a gold armband in two photos.

All of the supermodel’s clothing items were from Tropic of C, which she initially launched in 2018.

The fashion industry figure has made a point of attempting to make as little of an impact as possible with regard to the production of her wares.

Much of the fabric that is used in the construction of her items come from recycled materials that are pulled out from various landfills and oceans. 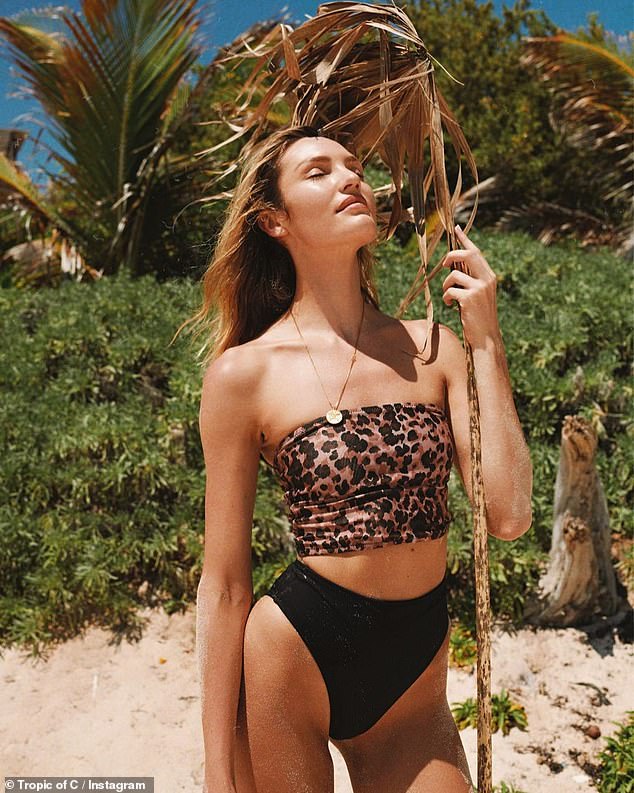 Making a difference: Swanepoel has made a point of ensuring that most to all of the fabrics that are used in the construction of Tropic of C’s clothing come from recycled materials

As opposed to screen printing, Tropic of C’s textiles are digitally printed, and the decision to do so was made in an effort to reduce water waste.

The company’s vision for eco-friendly business practices also extends to its packaging, as much of its materials are either recyclable or compostable.

Swanepoel spoke about how she was fully invested in all aspects of her business during an interview with Fashionista, where she noted that she was especially fond of modeling her own products. 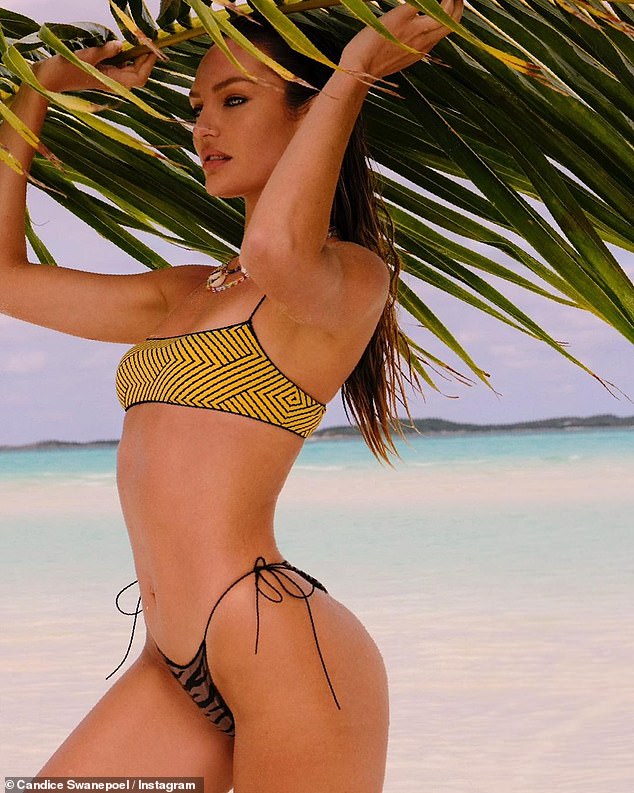 All angles: The supermodel’s vision for eco-friendly business practices extends to Tropic of C’s packaging, which is mostly made from either recyclable or compostable materials

‘I love the creative aspect, the art direction, dreaming up the shoots — the story of the girl, the coloring, the editing, the whole photography side,’ she said.

The runway fixture also remarked that her experience working for several different companies had prepared her for running her own brand.

‘As a model, you have to be a chameleon, and it’s nice to be in control of the art direction and involved in every aspect of the business,’ she stated.

Swanepoel concluded by expressing that she would not design or release products that she did not personally find visually appealing or comfortable. 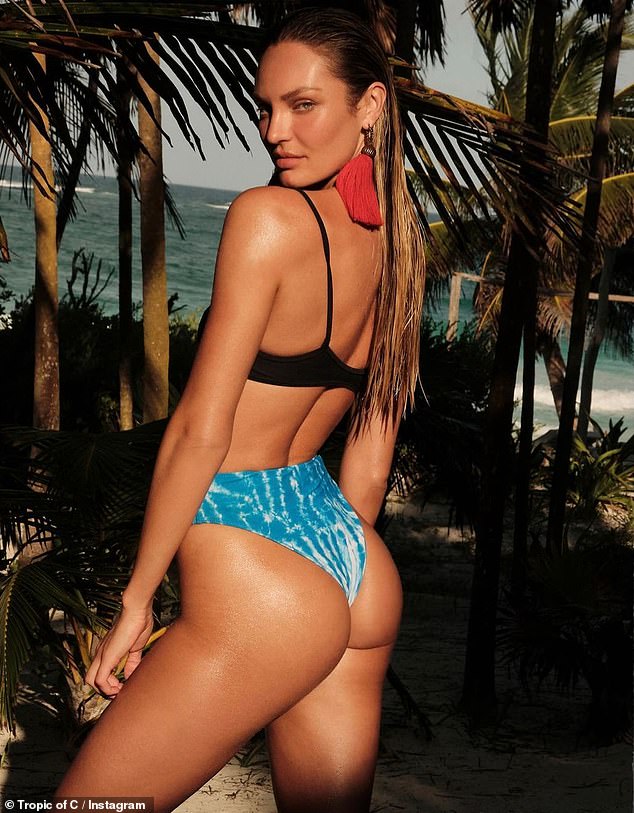 Branching out: The fashion industry figure spoke about her business during an interview with Fashionista and noted that she has learned how to be involved in several aspects of her company

She said, ‘It’s all stuff that I want to wear. I tend to stick to a certain aesthetic that I like and that I think looks good on the body.’

Apart from her work as a designer, the model has appeared in campaigns for several brands, including Givenchy, Versace and Guess, among several others.

Although she is best known for her work with Victoria’s Secret, the fashion industry icon has walked the runway for numerous fashion houses over the length of her career. 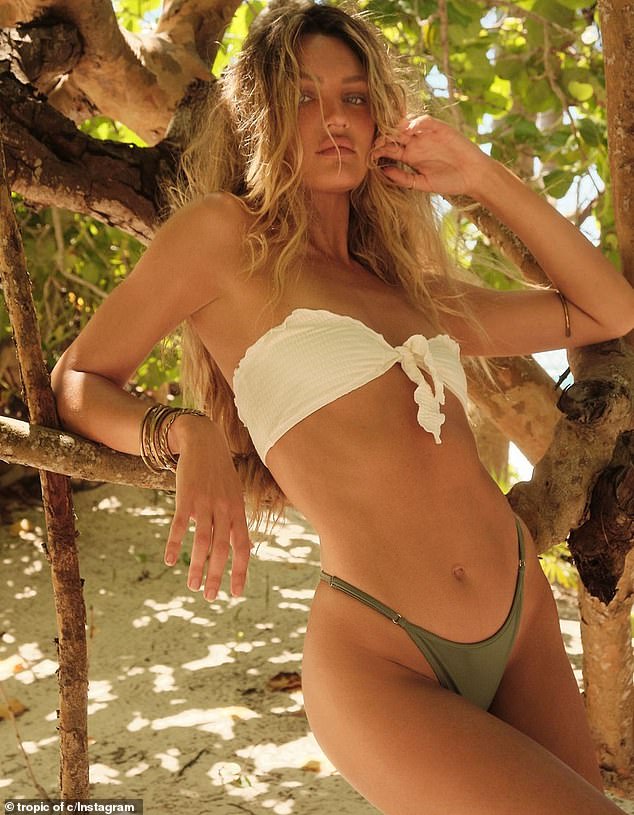 Personal approval: Swanepoel also expressed that she only wanted to produce swimwear items that look ‘good on the body’