Smoke on this! Cannabis plants could help fight climate change because they absorb carbon dioxide more than TWICE as effectively as trees

Cannabis plants could be the missing player in human’s fight against climate change, as hemp can absorb carbon dioxide from the air more than twice as effectively as trees.

Numerous studies have shown that hemp captures up to 16 tons of greenhouse gas annually, while trees suck up about six tons.

The carbon dioxide also becomes permanently encased within hemp fibers that are used in a range of products – from textiles to medicines and car parts.

Hudson Carbon, a New York research center that studies carbon storage, found that one acre of cannabis plants can store up to three tons of carbon, removing more than seven tons from the atmosphere.

Numerous studies have shown that hemp captures up to 16 tons of greenhouse gas annually, while trees suck up about six tons. And the plant grows much faster than trees

Ben Dobson, founder and president of Hudson Carbon in Hudson, told Lancaster Farming: ‘Roughly speaking, if [the US] did 50 million acres of hemp, we would be sequestering a couple hundred million tons of carbon per year on that acreage.’

Hemp, or industrial hemp, is a variety of the Cannabis sativa plant but contains deficient levels of the psychoactive compound tetrahydrocannabinol (THC) compared to marijuana, which is another variety.

The plant is considered ‘nature’s purifying,’ pulling toxins from the air and permanently trapping them within its fibers, Pebble Mag reports.

And it also absorbs carbon from the air as it grows, making it a carbon-negative crop.

Other crops, such as cotton, need at least 1,500 gallons of water for every pound produced.

At the same time, hemp requires less than half yet creates more than 200 percent more fibers on the same land, according to Rebekah Shaman, Managing Director at the British Hemp Alliance. 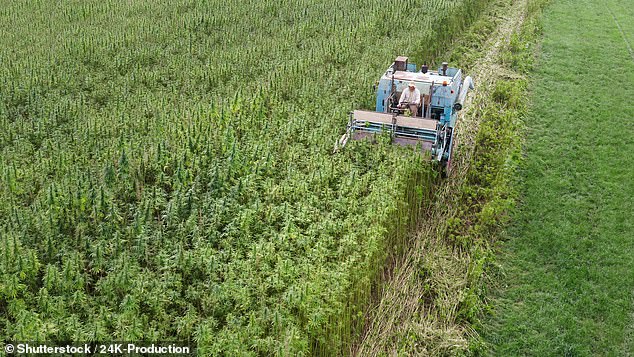 With approximately 50 million acres of hemp, a couple hundred million tons of carbon per year on that acreage, experts believe

The plant has become a significant source of bioplastics, construction and biofuels.

Previous studies have found that ‘600 million tons of [construction and demolition] debris were generated in the United States in 2018, which is more than twice the amount of generated municipal solid waste.’

Along with purifying the air of greenhouse gas, cannabis plants absorb carcinogenic heavy metals such as lead, mercury and cadmium from soils, which is suitable for crops used for food – but dangerous for people who ingest the plants.

Researchers in Pennsylvania have conducted a ‘meta-analysis’ of previous studies to examine the ability of cannabis plants to absorb heavy metals.

They report that some cannabis strains have been bred specifically for ‘phytoremediation’ – growing plants to remove pollutants from soils.