Large ‘cannibal’ explosion on the sun sent billions of tons of plasma hurling to Earth: Space weather forecasters say there is a 10% chance of X-class flares that could trigger radio blackouts

A ‘cannibal’ coronal mass ejection (CME) is barreling toward Earth that has a 10 percent chance of producing X-class flares, major events that can trigger radio blackouts, when it hits our planet Thursday.

CMEs are large expulsions of plasma and magnetic field from the sun’s corona – the outermost layer of a star’s atmosphere.

This week’s CMEs, released Monday from sunspot AR3078, gobbled up a previous ejection from Sunday and is now a ‘mish mash of the two’ with tangled magnetic fields and compressed plasma that are known to cause strong geomagnetic storms.

The National Oceanic and Atmospheric Administration (NOAA) experts are expecting G1- (minor) to G2-class (moderate) geomagnetic storms, which will likely produce auroras as far south as New York and Idaho.

In addition to an X-class warning, space weather forecasters say there is a 30 percent chance the shockwaves could result in M-class flares -medium-sized events that cause brief radio blackouts.

The coronal mass explosions were released from the sunspot AR3078. One shot out on Sunday and another Monday. However, the second ejection has consumed the first

AR3078 is one of five sunspots currently located on the sun’s surface and are dark regions where it is cooler than other parts of the surface.

NOAA’s Space Weather Prediction Center (SWPC) captured a M5 solar flare from AR3078 at around 5:30am ET Tuesday that was associated with a temporary moderate-strength radio blackout over parts of the Middle East and East Africa.

And in the past 24 hours, the sun produced a total of four M-class flares and a whopping 13 C-class – but these are minor solar flares that have little to no effect on Earth.

‘When the CME approaches Earth, NOAA’s DSCOVR satellite will be among the first spacecraft to detect the real-time solar wind changes and SWPC forecasters will issue any appropriate warnings. Impacts to our technology from a G2 storm are generally nominal,’ NOAA shared in a statement. 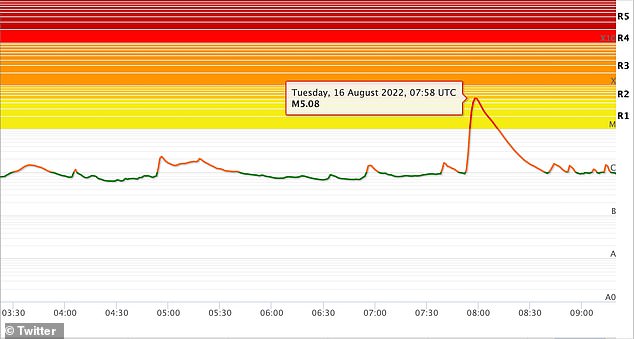 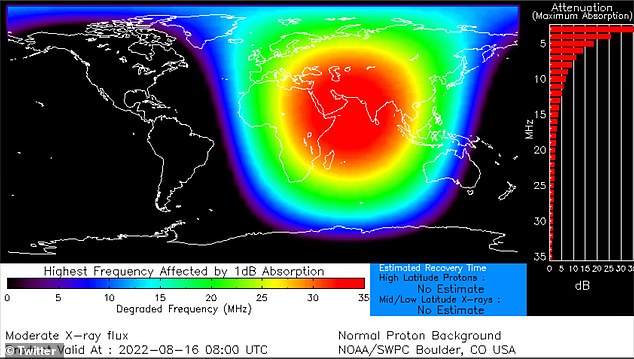 ‘However, a G2 storm has the potential to drive the aurora further away from its normal polar residence, and if other factors come together, the aurora might be seen over the far Northeast, to the far upper Midwest, across portions of the north-central states, and perhaps over the northwest section of Washington state.’

Auroras were witnessed July 19 after a solar storm hit Earth, producing electric greens and purples across the northern US and Canada.

Shortly after, on August 3, there was another solar storm warning.

There was also a C9.3 flare that shot out of the sun that Sunday, but it did not erupt on the sun’s side facing Earth.

It did, however, cause enough commotion to be captured by NASA’s Solar Dynamics Observatory – a craft that has been investigating our massive star since launching in 2010. 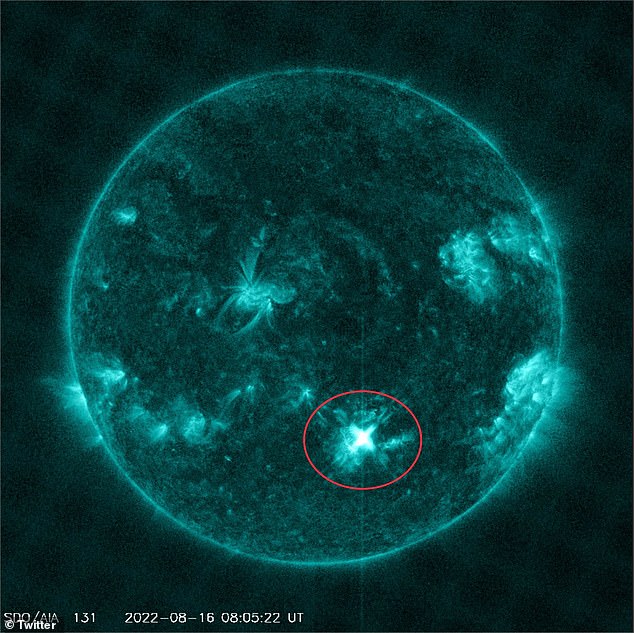 Mike Cook, who works in space weather operations, told DailyMail.com that there was a coronal hole in the southwest region of the sun’s face that was spewing ‘gaseous material.’

This enhanced solar wind speeds by shooting solar winds out in a stream.

The recent increase in activity from the Sun is the result of it coming towards the most active phase in its 11-year solar cycle – hitting peak activity in 2024.

Studies have shown that the level of solar activity currently happening, is about the same as it was 11 years ago, during the same point in the last cycle.