The massive and fearsome megalodon shark may have been able to reach up to 50ft in length thanks to cannibalism in the womb, researchers claim.

The extinct shark species lived more than 3.6 million years ago and was twice the length of a double-decker bus, according to a team from DePaul University.

The maximum body size of the sharks – that lived worldwide – was found after a more accurate equation was performed based on the size sharks can grow to today.

Researchers say megalodon reached a massive size thanks to adaptations including live births, early hatching and cannibalistic feeding on other eggs in the womb.

When the first shark pup hatches inside the mother, it proceeds to eat the rest of the eggs – a behaviour called intrauterine cannibalism, the study authors explained.

This combination of adaptations allowed the giant predator to grow to unparalleled sizes in comparison to other similar shark species from the same period. 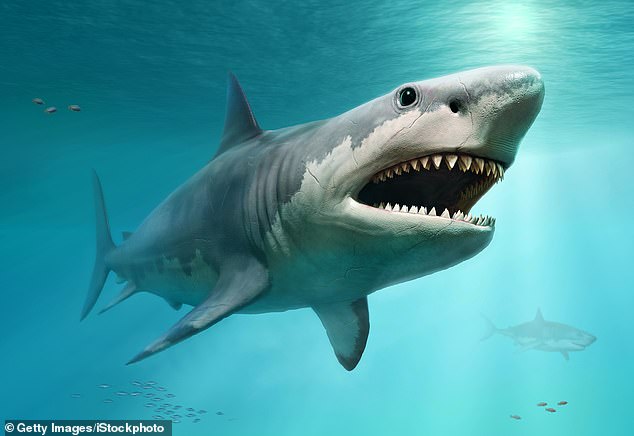 The massive and fearsome megalodon shark may have been able to reach up to 50ft in length thanks to cannibalism in the womb, researchers claim 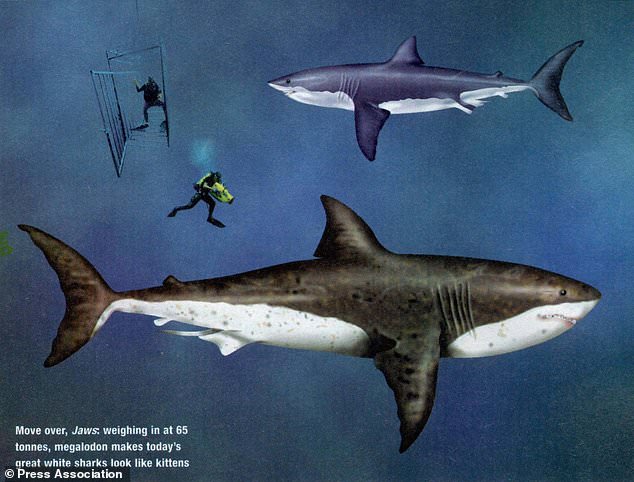 A megalodon could grow up to 50 feet (bottom) and have a dorsal fin almost as tall as the average human. The biggest living species of shark is the great white (top) which grows to 20ft

Before this new study by DePaul University, Chicago, researchers thought the megalodon reached up to 33ft in length, based on fossilised remains – mainly teeth.

The new study set to find out the ‘maximum body size’ for the shark species – rather than the size an individual may have been based on fossilised teeth.

The team looked at a wider range of sources, including a comparison to maximum lengths of modern shark species – to put the megalodon maximum length at 50ft.

It was previously thought that warm-bloodedness originally led to the gigantism in multiple shark species during the time of the megalodon.

However, this new study suggests it had a ‘unique cannibalistic egg-eating behaviour to nourish early-hatched embryos to large sizes inside their mother’.

Sharks have a reproductive strategy known as ovoviviparity where embryos develop inside eggs that stay inside their mothers until they are ready to hatch.

This ‘turns extreme’ among shark species similar to the megalodon in that the first shark pup to hatch eats the rest of the eggs before they get a chance to develop.

This is a behaviour called intrauterine cannibalism and by the time the pup emerges from the mother it is already large and ready to defend against predators.

Coming out larger gives them a greater chance of finding food after they are born and couples with favourable water temperatures may have allowed them to hit the gigantic lengths the team claim they could reach.

Otodus megalodon is commonly portrayed as a super-sized, monstrous shark, in novels and films such as the 2018 sci-fi thriller ‘The Meg’.

This new study illuminates exactly how uniquely gigantic the shark was, according to lead author Kenshu Shimada, a paleobiologist at DePaul University.

While there are a lot of fossils of the megalodon, the biology of extinct species is poorly understood because they are only known through their teeth.

The shark was a ‘true outlier’ in terms of its size as practically all other sharks that don’t feed on plankton have a general size limit of 23 feet, explained Shimada. 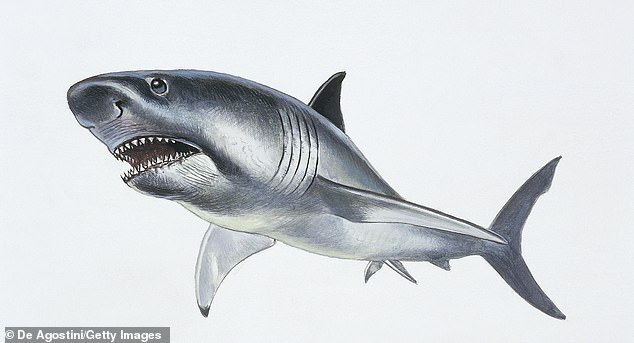 The US researchers say megalodon reached their massive size thanks to live births, early hatching embryos and cannibalistic feeding on other eggs while in the womb 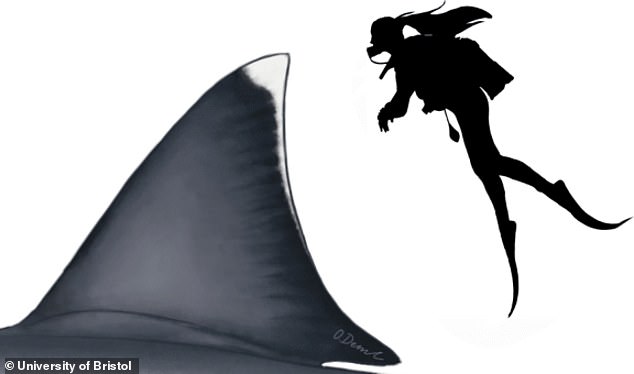 An average sized adult human could stand on the back of the shark and just manage to peer over the top of the dorsal fin. The shark was a ‘true outlier’ in terms of its size as practically all other sharks that don’t feed on plankton have a general size limit of 23 feet, explained Shimado

Even those sharks that do feast on plankton – such as the whale shark and basking shark – were equivalent or came close to the size of the Megalodon.

Sharks like the Megalodon have represented major carnivores in oceans since the age of dinosaurs, so it is reasonable to assert that they must have played an important role in shaping the marine ecosystems we know today, Shimada said.

The study also found after the age of dinosaurs, sharks grew larger than they were before dinosaurs roamed the Earth.

Michael Griffiths, professor of environmental science at William Paterson University, said: “This is compelling evidence for the truly exceptional size of megalodon.’

‘This work represents a critical advancement in our understanding of the evolution of this ocean giant,’ Griffiths added.

The findings have been published in the journal Historical Biology.

MEGALODON: THE BIGGEST SHARK EVER TO HAVE LIVED

The megalodon, meaning big-tooth, lived between 15.9 and 2.6 million years ago.

C. megalodon is considered to be one of the largest and most powerful predators in vertebrate history and fossil remains suggest it grew to 59 ft (18 metres) long.

It’s thought the monster looked like a stockier version of today’s much feared great white shark and weighed up to 100 tons.

Megalodon is known from fossilized vertebrae and teeth, which are triangular and measure almost eight inches (20cm) in diagonal length.

The Megalodon’s colossal mouth would have produced a but force of 10.8 to 18.2 tons.

The ancient shark has been described as a super predator, because it could swim at high speeds and kill a wide variety of prey such as sea turtles and whales, quickly in its strong jaws.