Canon has launched a new camera that automatically takes photos in the home using facial recognition.

The PowerShot PX, which is released in the UK and Europe today for £449.99 (€500), is like having ‘your own personal photographer’, but scaled down into a five-inch-tall device.

It automatically captures still imagery and video and can ‘prioritise certain faces’ – such as for someone’s birthday party.

The camera can pan, tilt and zoom into a scene in the home, whether it’s a ‘spontaneous family dance-off’ or friends around the dinner table.

While Canon claims that the new camera is ideal for families, it has been widely criticised on social media, with one user branding it ‘creepy’, while one privacy expert has called it ‘similar to CCTV’.

Would you allow the PowerShot PX in your home? The device knows when to automatically capture still imagery and video 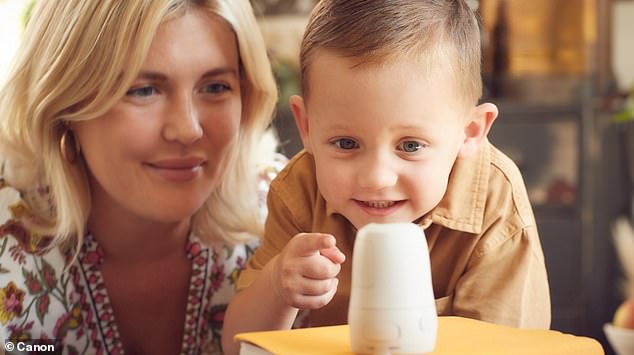 The device automatically takes photos of you and your family, it also lets you capture shots by voice command whenever you want, by saying ‘Hello Pixie, take a picture!’

– Facial recognition and tracking to keep subjects in frame

The device has built-in Wi-Fi to connect to the home network, as well as Bluetooth, so users can view all photos and video on the app.

Users can also use the app to turn their phone into a remote control for PowerShot PX, letting them ‘compose the perfect shot’ without having to get up and reposition it.

‘With this clever camera, families can enjoy the moment and still capture it, without having to stay behind the lens,’ Canon says.

‘PowerShot PX uses auto-subject searching to keep loved ones in the frame and capture photos that otherwise might have been missed.’

When on, ‘intelligent face tracking’ allows the camera to detect exactly when to take a photo automatically, without any manual or vocal command from the owner.

One way it knows to take a shot is when it detects faces in close proximity to each other, all clustered together facing forward – an indication to the technology that subjects are posing for a photo.

Alternatively, users can capture shots by voice command by saying ‘Hello Pixie, take a picture!’, or take photos in a more traditional, manual way by controlling PowerShot PX via an accompanying app, available for both iOS or Android. 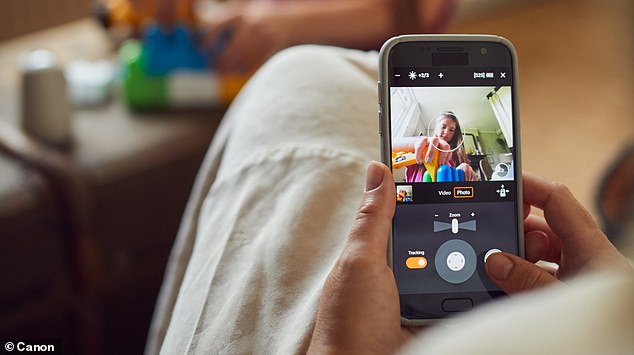 Content is saved to an SD card inside PowerShot PX. Users can use the compatible smartphone app to take control over who the camera prioritises when capturing

According to Canon, the camera is only active when it is switched on via the power button, but once users do so, it takes photos autonomously.

To decide whether or not to take a photo or video, PowerShot PX uses an ‘automatic shooting algorithm’, which uses scene recognition technology that has been developed over several years, the company told MailOnline.

Somewhat unsurprisingly, the device has received a wary reception from the public and privacy experts alike.

One Twitter user, Canadian blogger @AaronWrotkowski, said: ‘Canon made this so they could sell a murder mystery film about it – “the last photos of the victim were taken by the Canon PowerShot PX”.’

Another Twitter user, @RegGBlinker, called it a ‘horrible idea’ and said ‘we absolutely do not need to document my appearance in the lounge at all times of day and night forevermore’.

Meanwhile, @happymxlocust said: ‘It’s an interesting idea though it would feel really creepy.’ 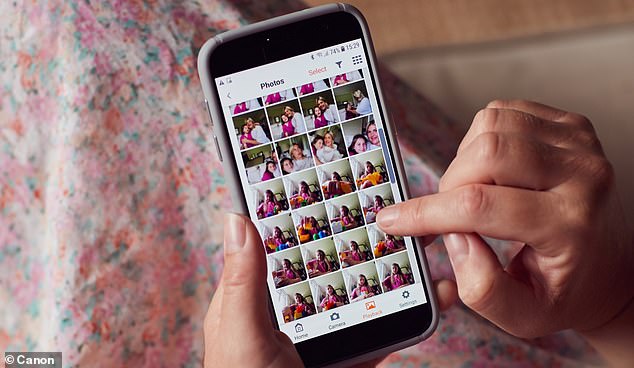 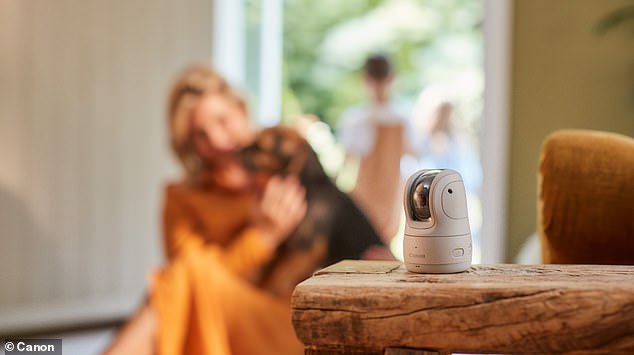 The camera can pan, tilt and zoom into a scene in the home, whether it’s a ‘spontaneous family dance-off’ or friends around the dinner table

‘The camera is Wi-Fi enabled, which would allow owners to manage their photos from their smartphone,’ Dr Tyson told MailOnline.

‘This is handy, but it would leave the camera potentially open to attack – where an adversary tries to access the photos remotely.’

‘The idea of being able to capture photos and videos without having to be behind a camera is an appealing idea.

‘However, there are privacy implications with such a device which can automatically continually take pictures of people.

‘From that perspective, while it’s marketed as a personal camera, it can be considered similar to CCTV, and so the same principles can be applied.

‘That is to inform people that pictures and video may be taken at any time, and that people can choose to opt out if desired.’ 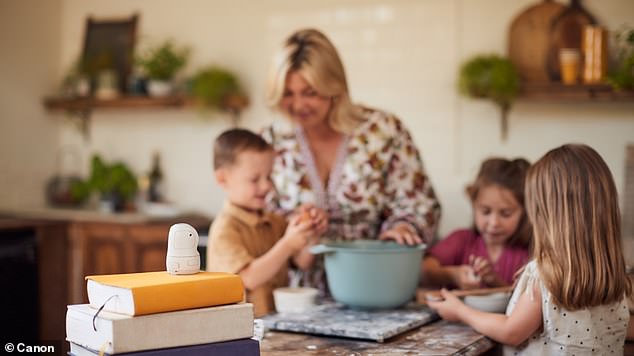 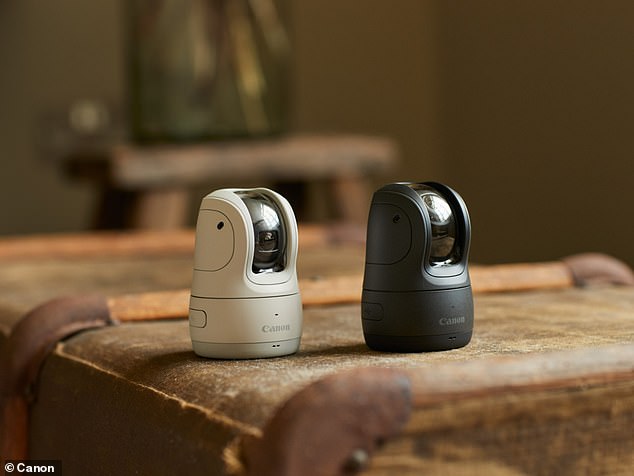 PowerShot PX comes in two colours (black and white) and is compatible with smartphones with operating system iOS 8.4 or later, or Android 5.0 or later

PowerShot PX is not an always-on camera – it must be set up and switched on by the user before it can capture shots.

Content is saved to an SD card inside the device, which connects to a smartphone via Bluetooth.

‘The camera is not connected to the internet and user’s data is not stored within the cloud,’ a Canon spokesperson told MailOnline.

‘Instead, all content is saved to a secure SD card inside the device.’

PowerShot PX comes in two colours – black and white – and is compatible with smartphones with operating system iOS 8.4 or later, or Android 5.0 or later.

CREEPY ‘EYECAM’ IS SHAPED JUST LIKE A HUMAN EYE

Engineers have created a creepy prototype webcam shaped just like the human eye, called the Eyecam.

Inspired by animatronics, Eyecam attaches to the front of a computer monitor and looks left and right – and even blinks – while tracking the face of each individual during a video call.

At first glance, it looks scarily realistic, right down to the wrinkles in the skin, the individual hairs that make up the eyebrows and the red vessels over the white of the eye. 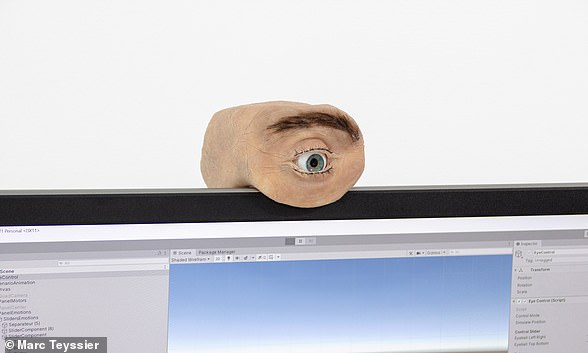 Most webcams are too small to be seen – but it’s unlikely you’ll have the same problem with Eyecam, which has been created because ‘eyes are crucial for communication’

Eyecam – which is comprised of motors surrounded by 3D-printed silicone – is open source, meaning you could create your own version at home.

Like a human eye, Eyecam is always blinking and the eyelids dynamically adapt to movements of the eyeball.