Folkes, who died in February last year due to a heart attack, has become the first Australian rugby league player to be diagnosed with chronic traumatic encephalopathy (CTE).

CTE has been found in former players of American football, ice hockey, soccer, rugby union and others exposed to repeated head injury.

Family and researchers revealed legendary player and Canterbury Bulldogs coach Steve Folkes (pictured) had a degenerative brain disease, which is linked to repeated concussions and blows that don’t cause signs or symptoms 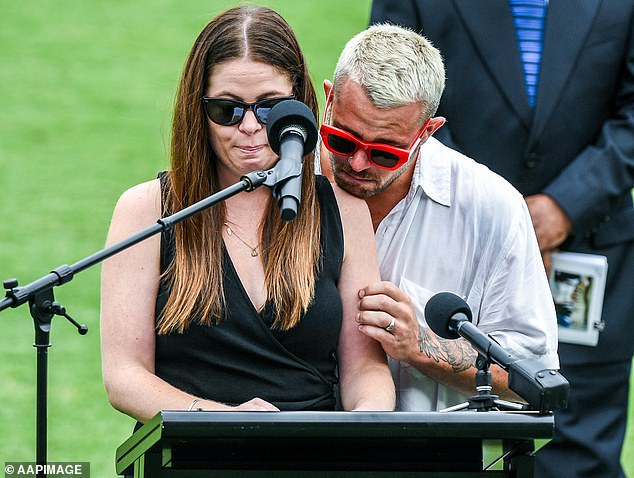 Folkes, who died in February last year due to a heart attack, has become the first Australian rugby league player to be diagnosed with chronic traumatic encephalopathy (CTE). Pictured  Folkes’ daughter Hayley Shaw and son Dan at his funeral

Researchers and clinicians from Royal Prince Alfred Hospital, NSW Health and the University of Sydney’s Brain and Mind Centre revealed that they had discovered CTE in two donated brains from middle-aged former professionals.

They didn’t name the players, but said the donated brains were from former players who played more than 150 NRL games over many years.

‘We don’t want to be alarming about it, but Dad had some problems and he looked after himself. If his story can help some of his mates and then help more research then that’s what we want out of it,’ Folkes’ daughter Hayley Shaw told the Sydney Morning Herald.

Lead author Associate Professor Michael Buckland said he told Hayley and Dan (Folkes’ son) that their father died with CTE, rather than from it.

‘I’m very grateful for Hayley and Dan giving us that permission. I feel very touched. In a way this gives me a lot of hope we’re not the USA and it’s not going to end up in the courts. Maybe we can work it out in a much better way than overseas.’

Folkes, who died at the age of 59, played 245 premiership matches for Canterbury Bulldogs between 1978 and 1991, appearing in six grand finals and winning four.

Some former retired players are planning to launch a class action lawsuit against the NRL.

The NRL is believed to be concerned that any legal action would follow in the footsteps of the National Football League in the United States, where former players took action against the league. 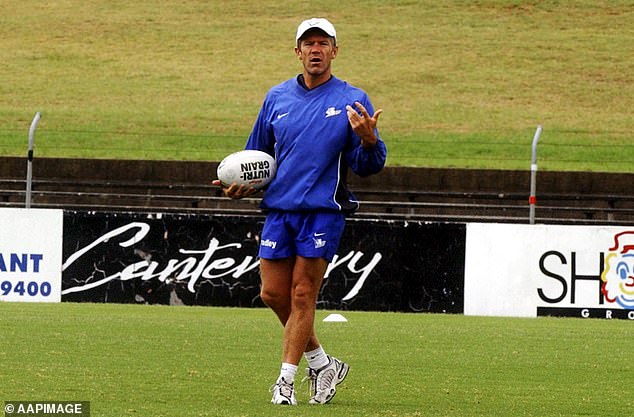 Folkes played 245 premiership matches for the Canterbury Bulldogs between 1978 and 1991, appearing in six grand finals and winning four

More than $US500 million was eventually paid out, but legal experts have suggested a key difference is the NFL covered up its knowledge of the impact of concussion.

The disease, originally called punch-drunk syndrome to describe the plight of ex-boxers, can often lead to depression and other behavioural disturbances in younger people.

Symptoms in older people, however, may be indistinguishable from Alzheimer’s disease.

It can only be diagnosed confidently by examination of the brain after death.

More than 80 athletes have pledged to donate their brains to the Australian Sports Brain Bank, set up by Associate Professor Buckland in 2018.