Peaceful daytime protests over the death of George Floyd continued across the country on Wednesday, with many cities under curfew orders to prevent the unrest from spilling into violence after nightfall.

In Washington DC, some Capitol Police in charge of protecting Congress took a knee as protesters shouted slogans, similar to other scenes that have played out across the nation.

While many view the gesture as an act of solidarity with peaceful protests, as police join in condemning Floyd’s in-custody death, others have criticized cops who participate as bowing down before protesters.

President Donald Trump waded into the debate on Wednesday morning for the first time, retweeting a message that said New York City police were being forced to ‘bend a knee to terrorists.’

US Capitol police kneel as demonstrators protest the death of George Floyd at the US Capitol on Wednesday in Washington, DC, after the protesters demanded they take a knee 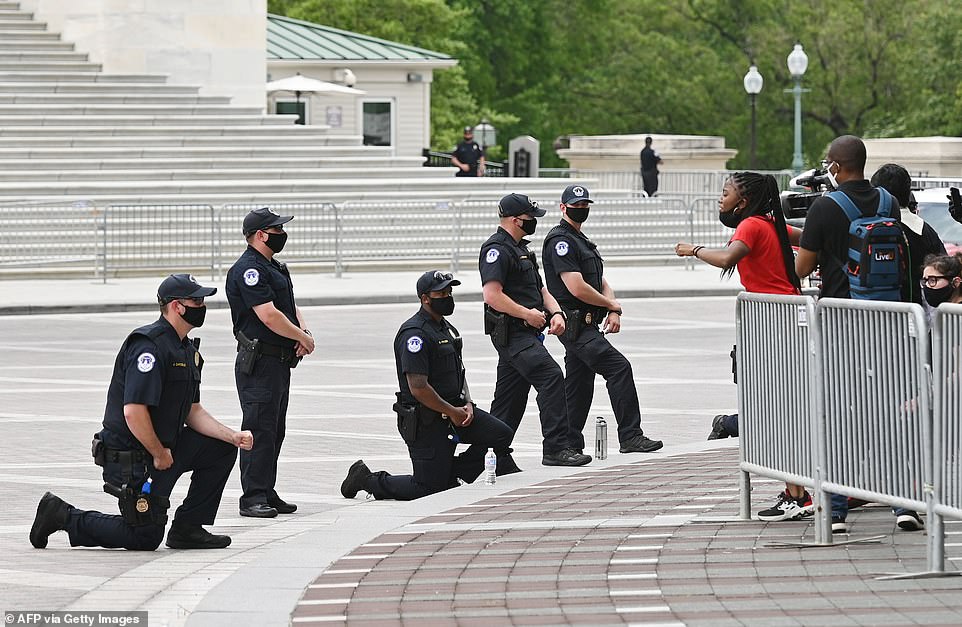 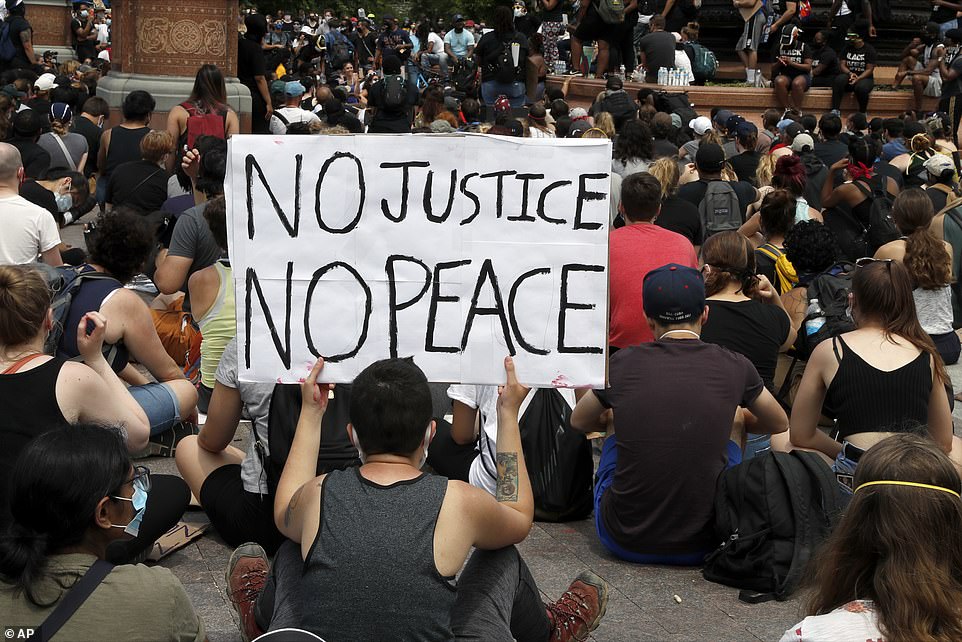 Later in the day, the protesters lay face-down in front of the Capitol in silence.

Organizers asked them to stay down and stay quiet for the about same amount of time fired police officer Derek Chauvin knelt on George Floyd’s neck before his death in Minneapolis last week.

In the afternoon, House Speaker Nancy Pelosi emerged from the Capitol building to greet and mingle with the protesters.

Charges against Chauvin were upgraded to second-degree murder on Wednesday, and the three other officers at the scene were newly charged with aiding and abetting murder.

However, the news seemed to do little to quell the protests and unrest, which continued for a tenth straight day. 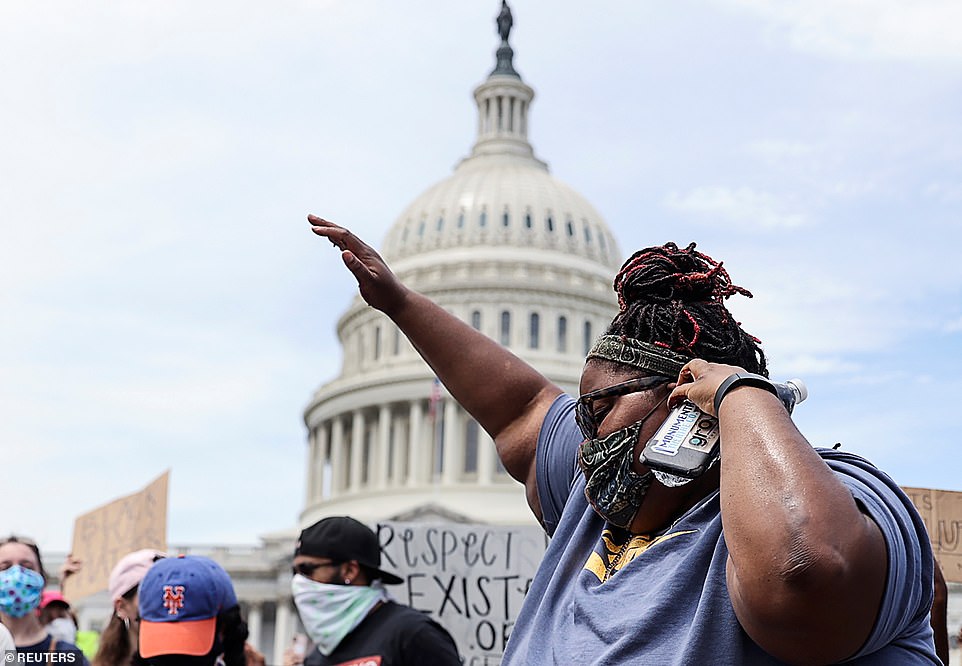 Demonstrators participate in a Black Lives Matter rally as protests continue over the death in Minneapolis police custody of George Floyd, outside the U.S. Capitol on Wednesday 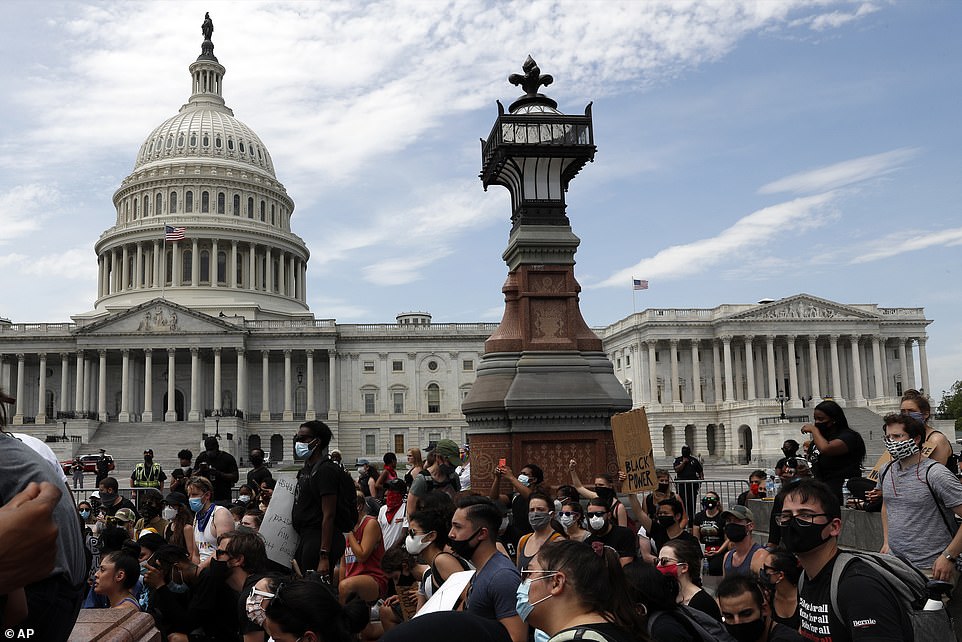 Demonstrators on the East side of the U.S. Capitol in Washington protest the death of George Floyd on Wednesday 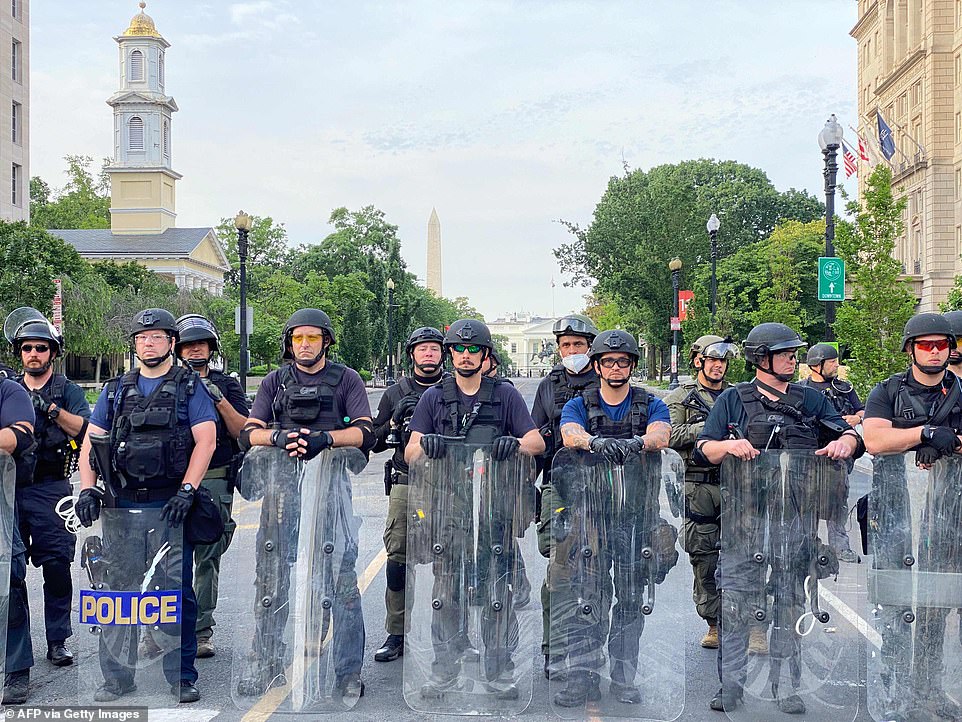 On Chicago’s northwest side, a crowd of early-morning marchers was followed by a procession of honking cars in the Logan Square neighborhood.

The 8am march, which passed near Chicago Mayor Lori Lightfoot’s home, urged residents to ‘wake up’ to their protest of racial injustice and police brutality.

Organizers with the Freedom Road Socialist Organization and the Chicago Alliance Against Racist & Political Repression called for the creation of a civilian police oversight board.

‘Those are death camps right now, because of COVID-19,’ he said. ‘Free them all!’ 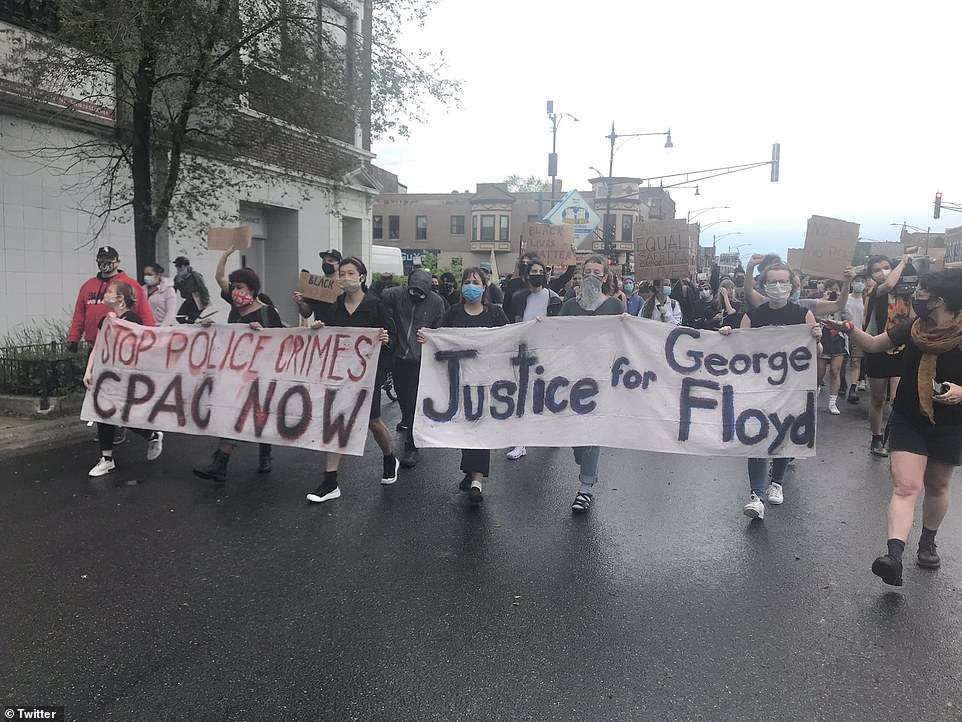 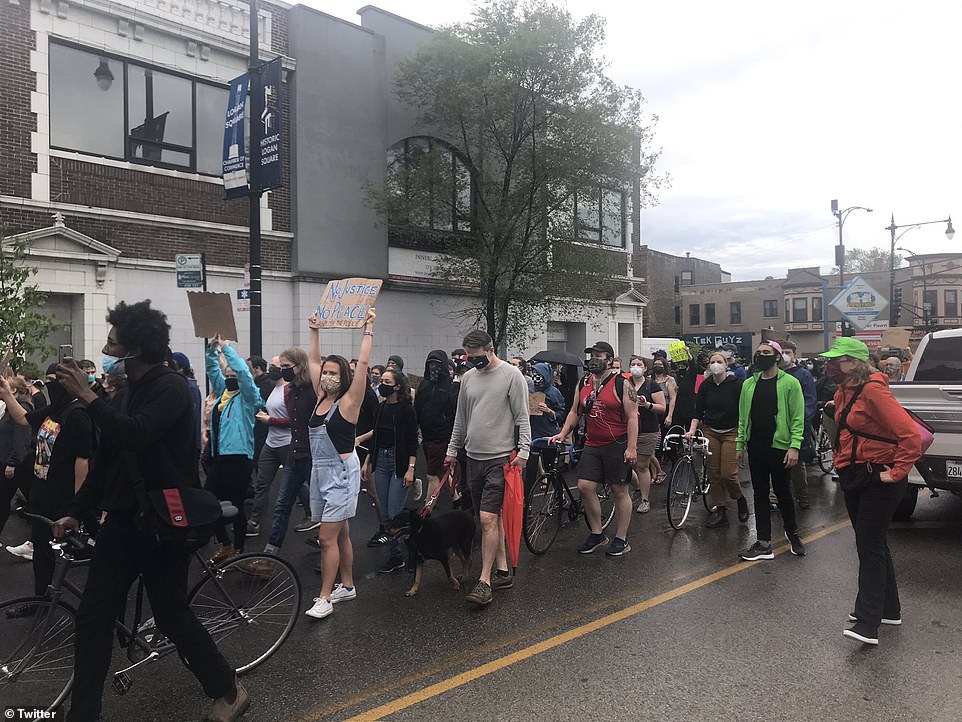 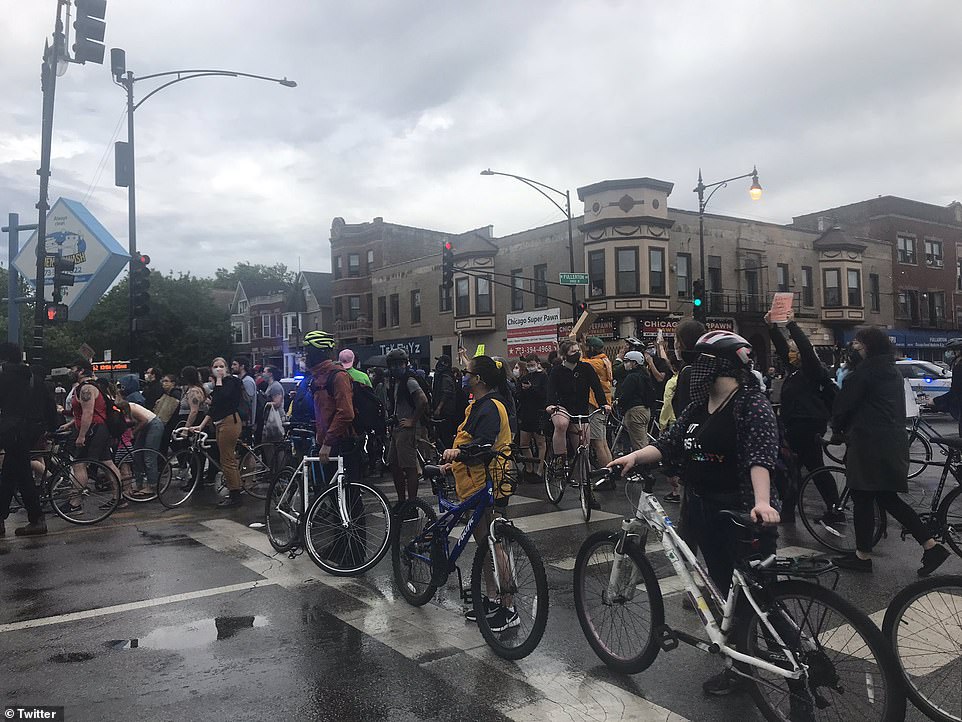 The 8am march, which passed near Chicago Mayor Lori Lightfoot’s home, urged residents to ‘wake up’ to their protest of racial injustice and police brutality 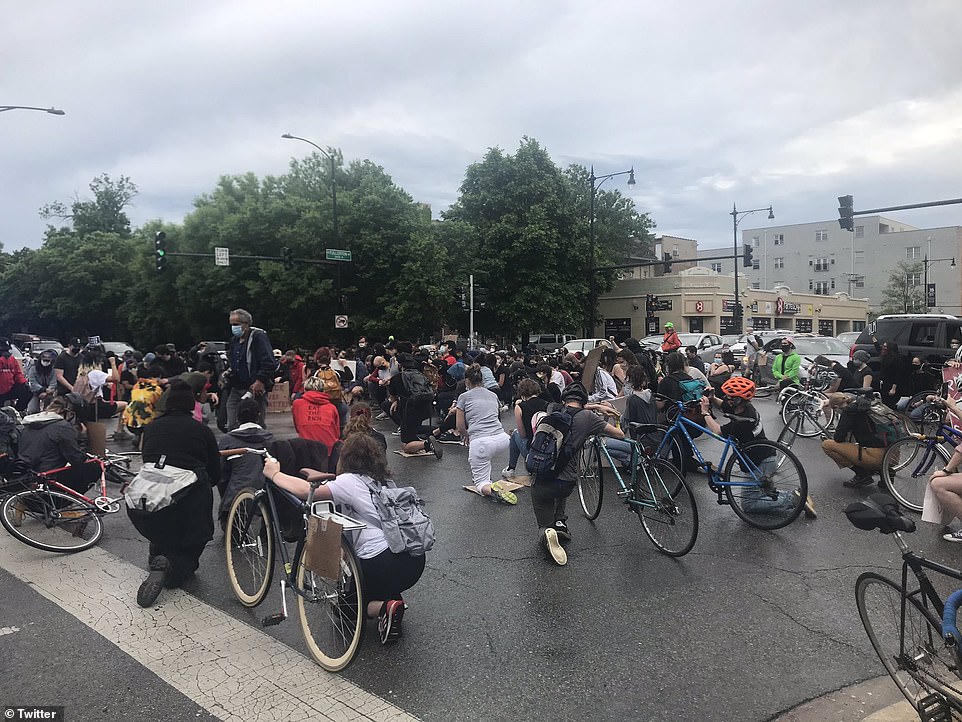 In Boston, a large group gathered at the Boston Common on Wednesday afternoon.

National Guardsmen and hundreds of police officers were on hand to maintain order.

Organizers called for the event to remain peaceful.

‘Massachusetts needs to let America know we do not stand for racism!’ organizers said in a Facebook post. ‘We need to show support for our fellow Americans and honor human life.’

The organizers said the event would end at 5.30pm, noting the city has a recommended curfew of 9pm due to the coronavirus pandemic. 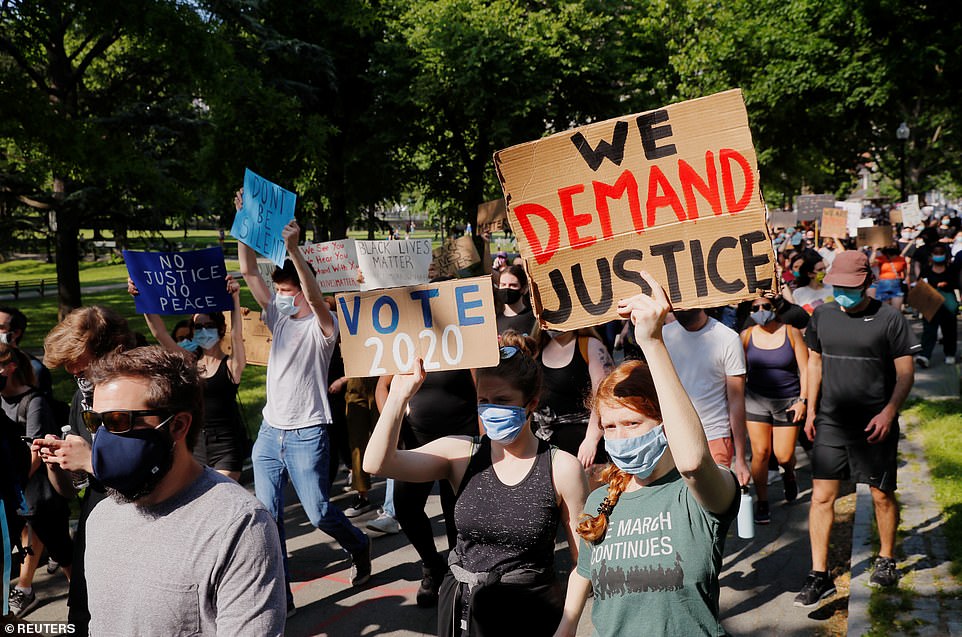 People take part in a rally following the death in Minneapolis police custody of George Floyd, in Boston on Wednesday 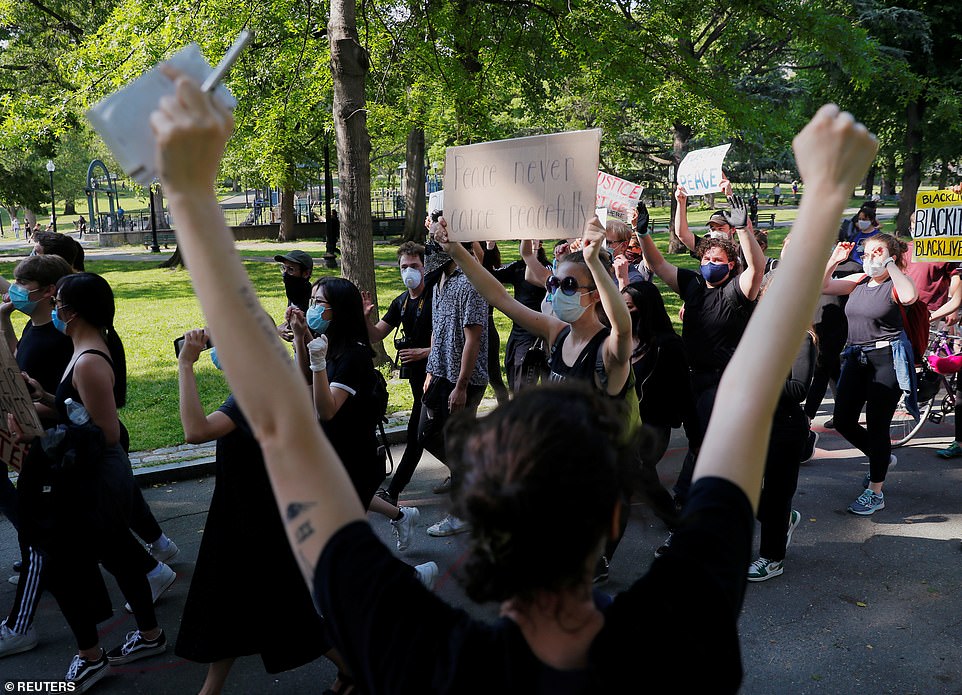 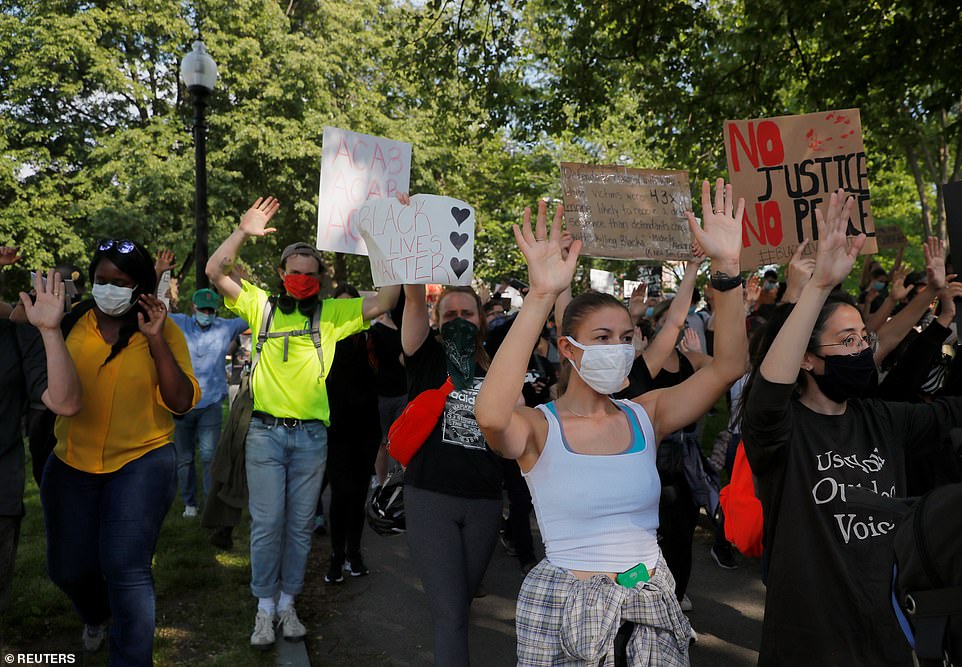 People hold up their hands during a protest following the death in Minneapolis police custody of George Floyd, in Boston 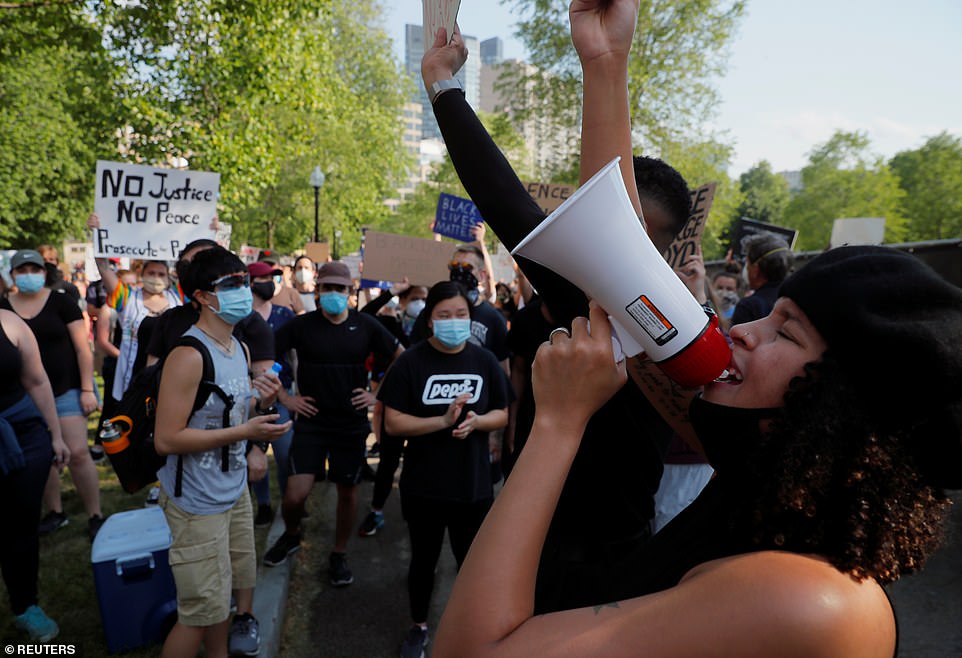 In Montgomery, Alabama, a large group of demonstrators gathered at the state capitol building.

The large group marched from the Legacy Museum to the statehouse, where they gathered on the steps to protest against police brutality.

They called for change and reconciliation. People of all ages and races, and members of the clergy were present.

In New York, the scene of massive protests as well as shocking looting after dark in recent days, the streets were calmed by afternoon rain showers.

However, as the weather cleared by 4pm, several large groups began gathering in Washington Square Park and elsewhere.

One group marched up 5th Avenue to Grand Army Plaza. 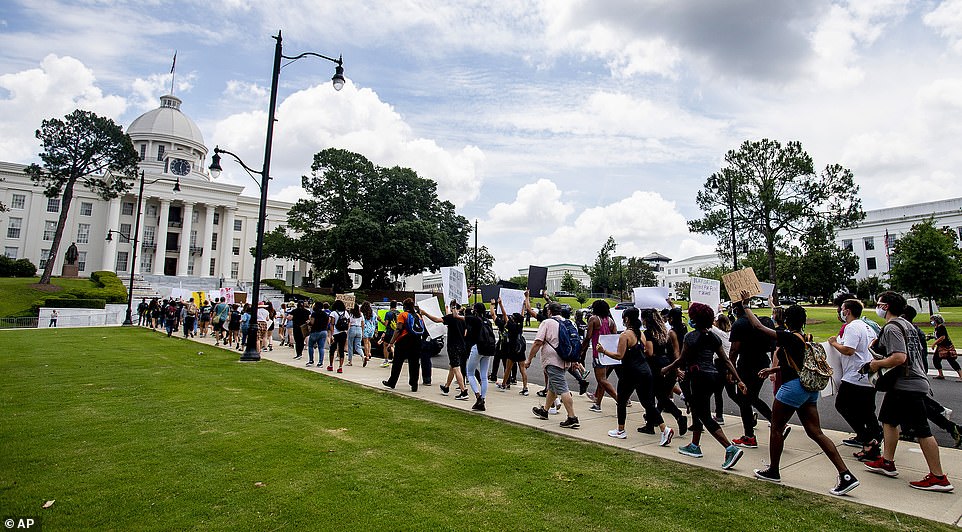 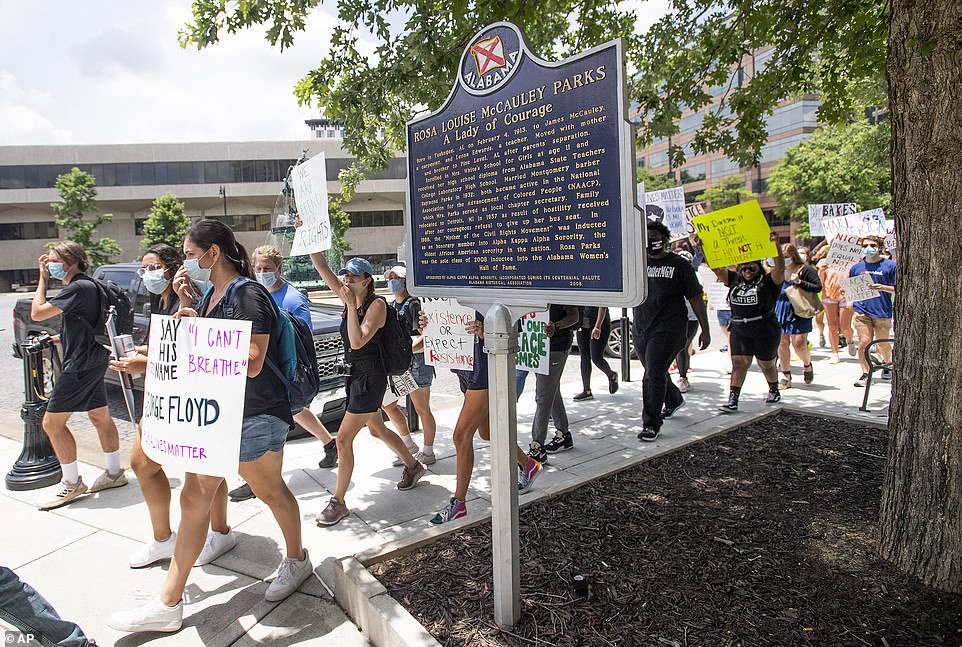 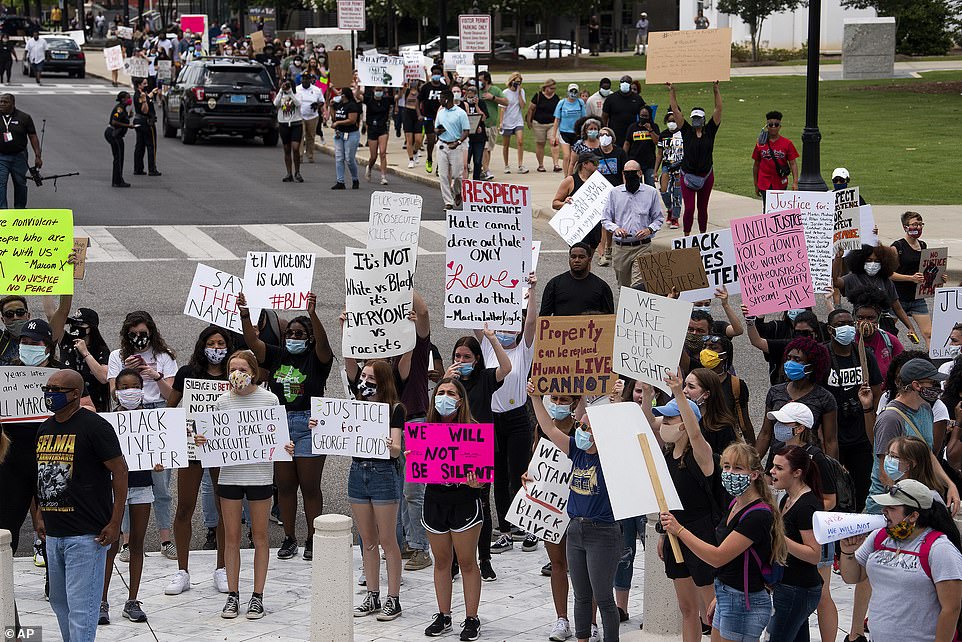 The large group marched from the Legacy Museum to the statehouse, where they gathered on the steps to protest

Storefronts in New York were fortified at new levels of security in fears of violence breaking out after dark, with companies adding razorwire and guard dogs to deter looting.

A large protest march also occurred in the Brooklyn neighborhood of Bed-Stuy. Some business owners in the neighborhood prepared by putting signs saying ‘black owned’ in their storefront windows.

On Wednesday, the National Guard of Washington, DC, launched an investigation into claims that the Trump administration ordered a military helicopter to fly low as a ‘show of force’ against George Floyd protesters near the White House.

The helicopter, normally designated for use in medical evacuations, hovered low enough to create a deafening noise and spray protesters with rotor wash on Monday.

On Wednesday, the commanding general of the DC Guard, Maj Gen William Walker, said in a statement that he directed the investigation.

The investigation comes as the federal government has promised to maximize its law enforcement presence in the nation’s capital. 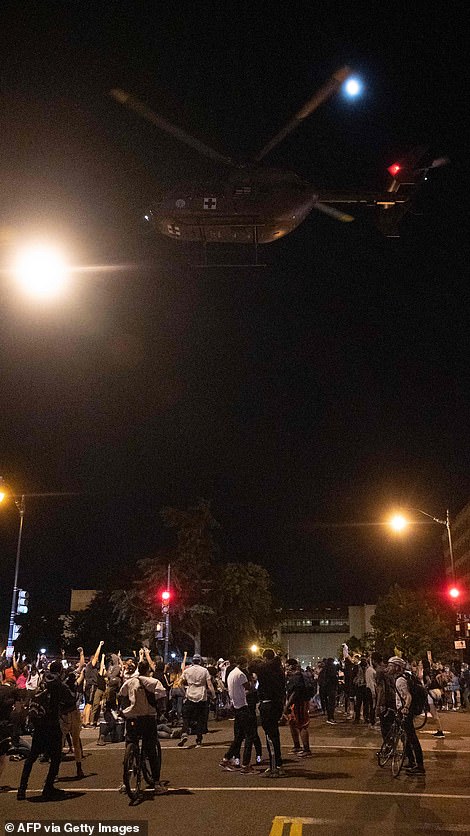 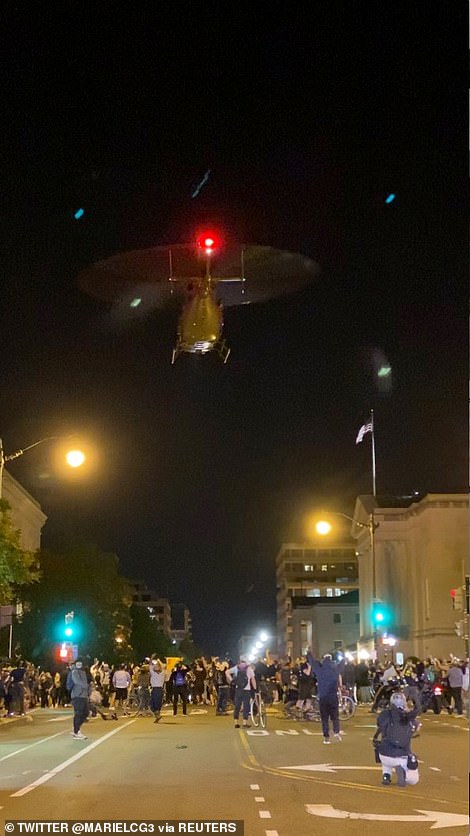 The National Guard of Washington, DC, is investigating the use of one of its helicopters (left and right) to make a ‘show of force’ against George Floyd protesters near the White House 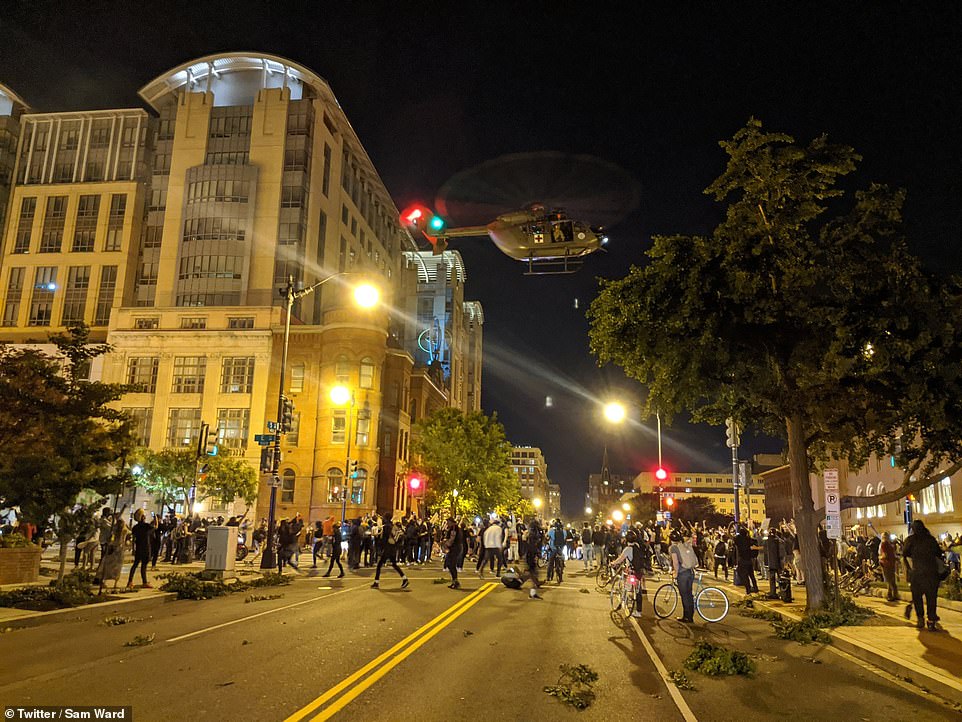 Scores of heavily-armed federal officers in tactical gear have been on the district’s streets for days, after demonstrators set fires, broke store windows and stole items from the shelves and left police officers injured.

The Trump administration has made an effort to show a use of force in Washington. Hours before a 7pm curfew on Tuesday, cars were being stopped at military checkpoints downtown, and a cavalry of armored military vehicles could be seen driving through the district.

Mayor Muriel Bowser said the administration had floated the idea of taking over the Metropolitan Police Department, a proposal she strongly rejected. She threatened to take legal action if the federal government attempted to do so.

Two Defense Department officials said the administration had ordered military aircraft to fly above Washington on Monday night as a ‘show of force’ against demonstrators.

Meanwhile, Los Angeles County has ordered another overnight curfew, but it will be four hours shorter.

The curfew will begin at 9pm Wednesday and end at 5am Thursday. Previous curfews ran from 6pm to 6am.

A few municipalities in the sprawling county continue to have stricter curfews. Huge demonstrations in Los Angeles on Tuesday were peaceful, and subsequent arrests were only for curfew violations.