Capitol riot: A THIRD of voters think violence against government can be justified, new poll finds

Days before the country marks one year since the deadly events of January 6, new polls released Sunday show the extent to which Americans’ confidence in their own democracy and institutions has deteriorated since Donald Trump’s supporters stormed the United States Capitol.

Roughly one-third of American voters believe that violence against the government could be justified, according to the Washington Post- University of Maryland’s survey.

And according to CBS/YouGov polling, a majority of people think the violence seen on January 6th was just the beginning.

WaPo’s poll, taken between December 19 and December 19, asks US adults: ‘Do you think it is ever justified for citizens to take violent action against the government, or is it never justified?’

Thirty-four percent of respondents said it could be, while 62 percent believe it’s never justified.

Among Republicans, the inclination toward violence is slightly higher with 40 percent — or four in 10 GOP voters — believing violent action against the government could be within reason.

But the notion was strongest among Independent voters, 41 percent of whom said it was justified.

Slightly more Republicans than Independents said violence against the government is never okay, while 74 percent of Democrats answered the same.

The Washington Post surveyed 1,101 American adults between December 17 and December 19 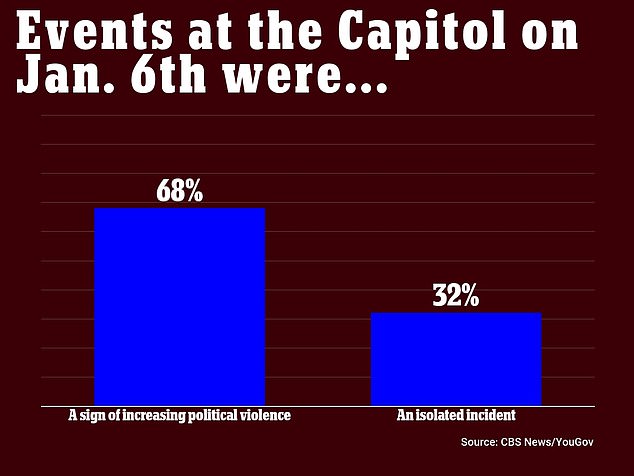 CBS also released a poll reflecting on the Capitol riot, finding that a majority of Americans think there is more to come

There was also a significant racial gap in responses, with 40 percent of white Americans compared to just 18 percent of black Americans believing aggressive tactics could be justified.

Among those who agree, some of the situations that could call for violence is government takeover of rights and freedoms, turning into a dictatorship or a military coup.

Another survey released today shows that two-thirds of Americans think the Capitol riot is a harbinger of future politically-charged violence.

A whopping sixty-eight percent of respondents to a CBS/YouGov poll taken December 27 through December 30 said the insurrection was a sign of ‘increasing’ hyper-partisan aggression.

Many of those same Americans now associate such eruptions with elections, yet another devastating blow to the US’s image as President Joe Biden attempts to project the US as a leading global force for democracy in an increasingly autocratic world.

It also casts a bleak shadow over the 2022 midterm elections, now less than a year away.

Sixty-two percent of CBS poll respondents said they expect violence from the losing side in the next presidential election, compared to 38 percent who believe the losers will ‘concede peacefully.’ 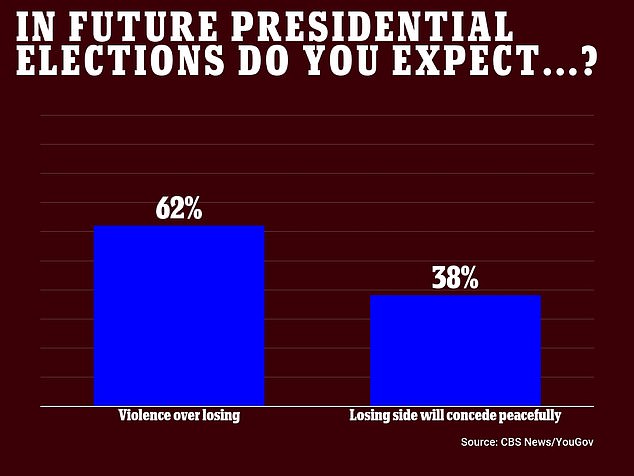 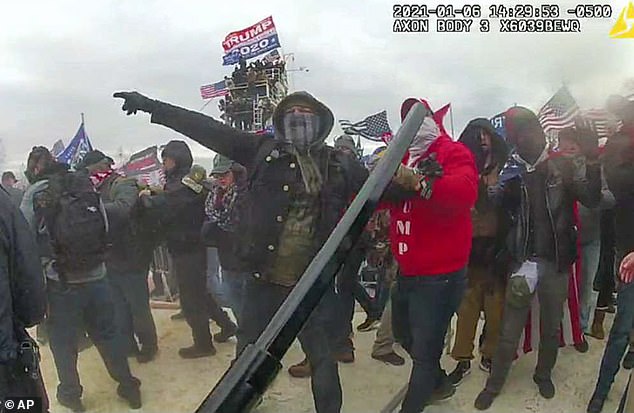 While overall perception of those who stormed the Capitol is negative, Republican voters were found to have a softer view compared to Democrats’ near-universal condemnation

Similarly, 66 percent of voters surveyed said they believe US democracy is under threat.

Fallout from the Capitol riot has driven a wedge within the Republican Party. Those who have dismissed the insurrectionists as ‘tourists’ or otherwise downplayed the day’s events are more often allied with Trump while those seeking to hold him accountable for it are increasingly isolated from their peers.

The two GOP lawmakers on the House January 6 committee, Reps. Adam Kinzinger and Liz Cheney, have been under constant attack by the president and his supporters in Congress. Kinzinger announced this year that he won’t seek re-election, and last month the Wyoming State GOP formally gave Cheney the boot.

Those partisan views are prevalent among voters as well, though a majority of Americans still view the riot in a negative light.

Asked about their perceptions of those who forced their way into the Capitol a year later, a majority of Republican respondents — 42 percent — only ‘somewhat disapprove.’

In addition, just nine percent of Democrats ‘somewhat approve’ of the rioters while 18 percent, or double, the number of GOP voters feel the same.