The Florida sheriff’s captain who oversaw the initial response to February’s Parkland high school massacre resigned Tuesday and the first sergeant to arrive at the scene has been suspended over what other law enforcement officials saw as their inaction during the initial minutes after the first shots were fired.

He was ordered to surrender his gun, badge and car and not to perform any law enforcement duties.

Jordan oversaw the city of Parkland on Feb. 14 when a gunman killed 17 at Marjory Stoneman Douglas High School.

Law enforcement officers told investigators she appeared to be in a trancelike state and overwhelmed as she tried to direct the initial response to the attack.

Miller arrived at the school during the shooting but video shows he stayed outside the parking lot until long after the massacre ended, even as other law enforcement officers entered the building.

At the request of a state commission investigating the massacre, the sheriff’s office had not immediately conducted its own inquiry into its deputies’ actions.

An investigator for the Marjory Stoneman Douglas High School Public Safety Commission gave a report last week that was heavily critical of both Jordan and Miller.

Jordan never ordered deputies into the three-story freshman building where the shootings happened, the report said. 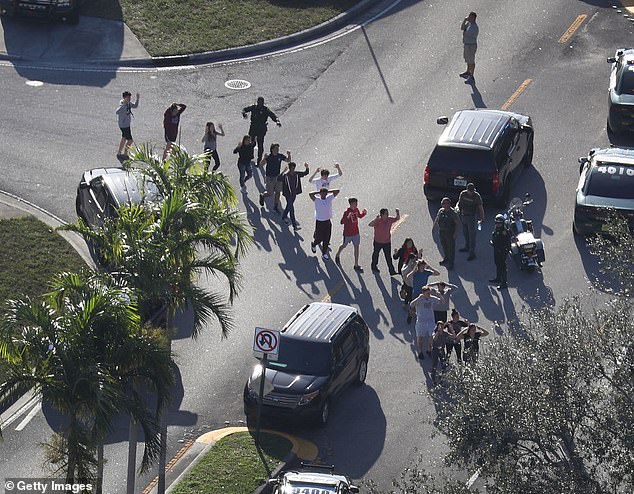 Jordan oversaw the city of Parkland on Feb. 14 when a gunman killed 17 at Marjory Stoneman Douglas High School

Although her radio frequently failed because the system was overloaded, her first transmission ordered a perimeter to be formed around the school.

She arrived at Stoneman Douglas about 10 minutes after the shooting began.

He arrived at the command post shortly after the shooting.

Jordan was removed as Parkland’s commander in June.

Shots were still being fired when Miller arrived at the school and parked on a road a few hundred feet from the freshman building, video shows.

Commissioners said Miller should have taken command as ranking deputy on the scene, but he instead took a position behind his patrol car and never made a radio call.

He then stood by as officers from neighboring Coral Springs and later arriving deputies ran past him into the building.

Sheriff Scott Israel had no comment on Jordan’s resignation but said after reviewing the commission’s report he felt it ‘prudent’ to relieve Miller of duty.

Israel has also been heavily criticized by the parents of some slain students, who have called on Gov. Rick Scott to suspend him from office. 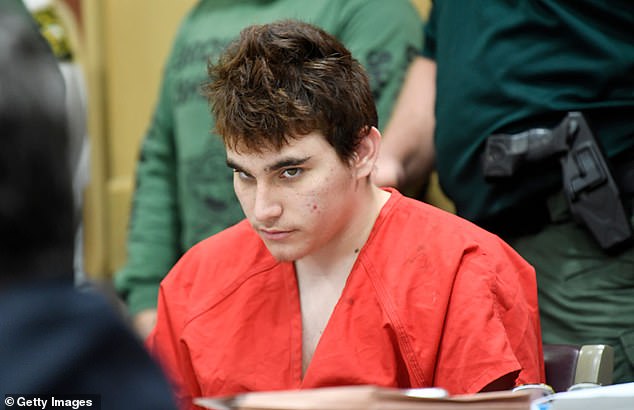 The shooting suspect, Nikolas Cruz, is seen above in a Fort Lauderdale courtroom on April 27

Phone numbers for Jordan and Miller could not be located.

The Broward Deputies Association, which represents patrol officers like Miller, did not immediately return a call for comment Tuesday.

Commission member Ryan Petty, whose 14-year-old daughter Alaina died in the shooting, said Tuesday that in light of the commission’s findings, ‘it was the honorable thing for Capt. Jordan’ to resign.

He said Israel promised the commission last week he would take swift action against deputies who failed to perform during the shooting, so he was glad to see Miller suspended.

Another Broward deputy, Scot Peterson, was the longtime resource officer at Stoneman Douglas.

He retired in February after video showed that he got to the building about a minute after the first shots were fired but drew his gun and took cover.

Petty said he is still waiting for Broward school Superintendent Robert Runcie to follow through on the swift discipline he promised last week against any Stoneman Douglas administrator found to have not taken appropriate action against shooting suspect Nikolas Cruz when he attended the school.

A commission investigator testified last week that two students said they reported Cruz to an administrator in December 2016 after one of them said Cruz threatened to shoot up the school.

They disagreed on whether they spoke to Principal Ty Thompson or Assistant Principal Jeff Morford, but agreed the administrator dismissed their concerns and blamed Cruz’s behavior on his autism.

They said the administrator told them Cruz would be out of the school soon. Cruz was removed from the school three months later.

A mother of one of the teens said she spoke to Thompson the next day, upset with her son’s treatment.

She told investigators Thompson said that if she didn’t like how the school was run, she should remove her son.

Thompson and Morford told investigators the meetings never happened, but Gualtieri said other than the disagreement on which administrator they contacted, the boys’ and mother’s stories corroborated each other.

Cruz, 20, is charged with 17 counts of first-degree murder and faces a possible death sentence.

His attorneys have said he would plead guilty in exchange for a life sentence.