A series of parking spaces installed at a London shopping centre aimed at ‘promoting diversity’ left shoppers baffled and confused where to park their car. 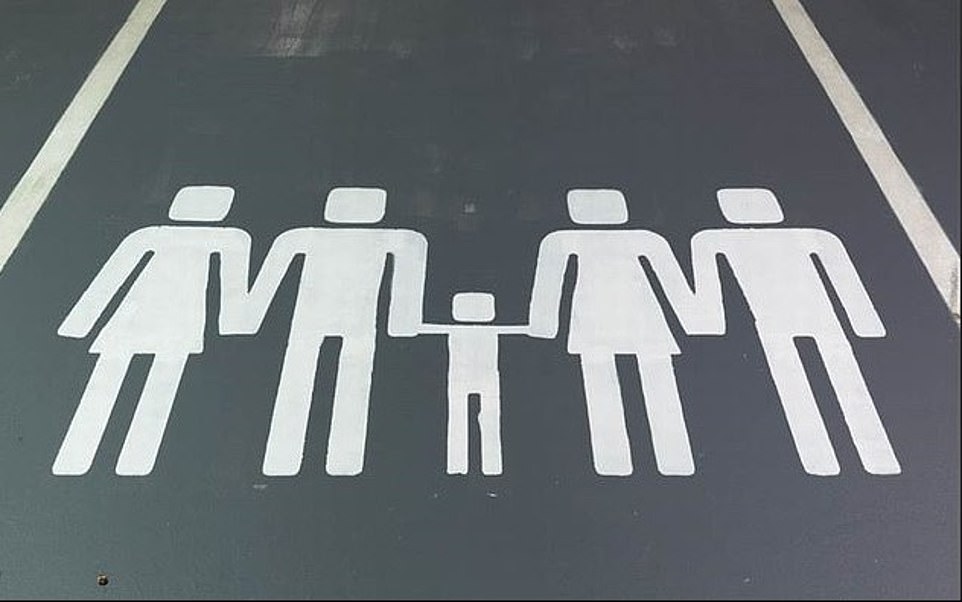 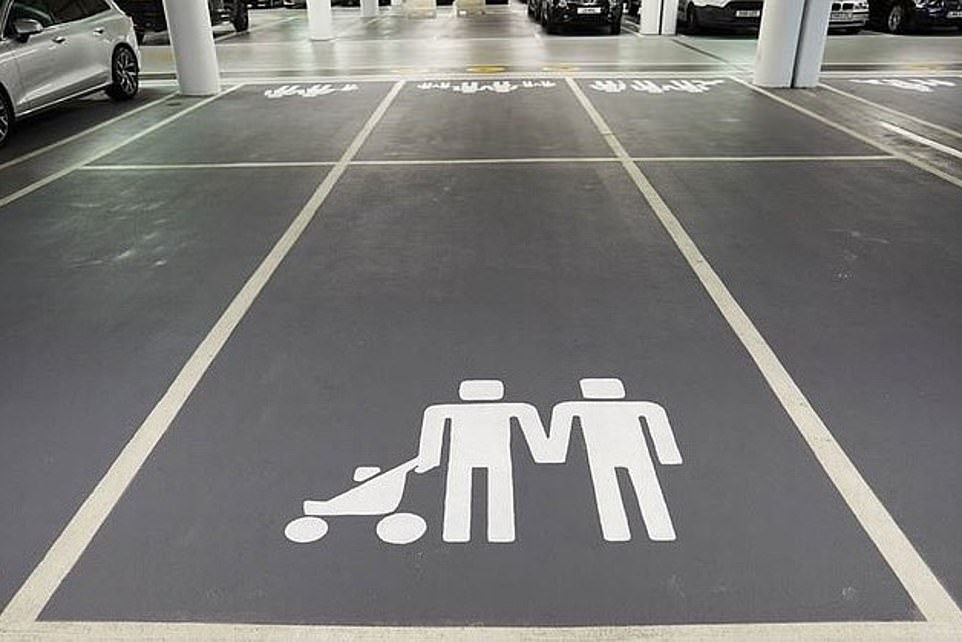 While some of the icons were easy to decipher, others had customers scratching their heads wondering if they were allowed to park there.

The signs for same-sex couples were relatively obvious, but more obscure ones such as ‘grandparent, guardian and child’ and ‘pregnant mother with female partner and baby’ proved more difficult.

The parking spaces were an attempt to challenge the traditional ‘mother, father and child’ signs seen across the country. 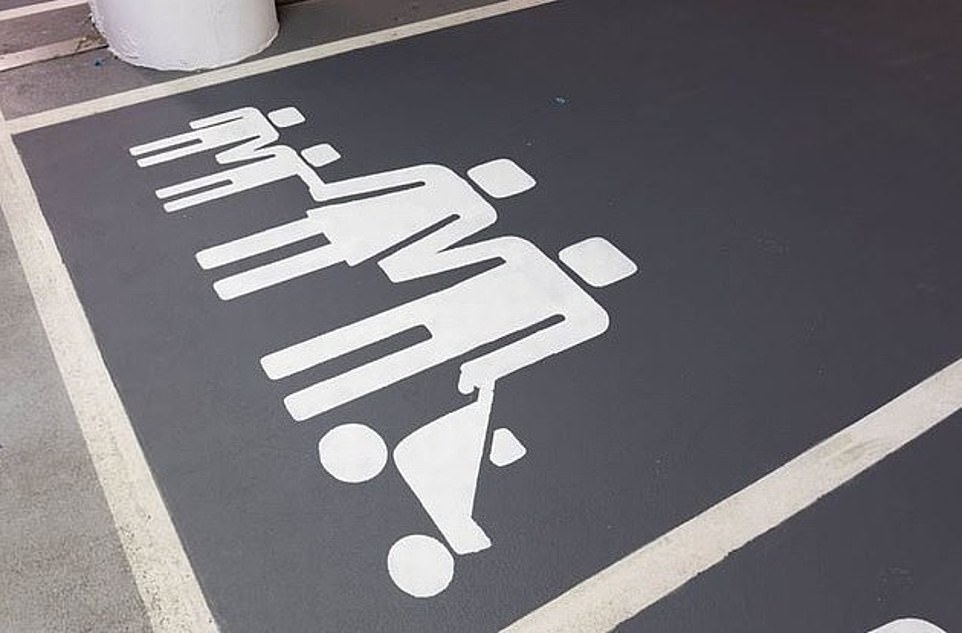 Conventional: One of the easier spaces to work out was one showing a mother and father with multiple children and a baby 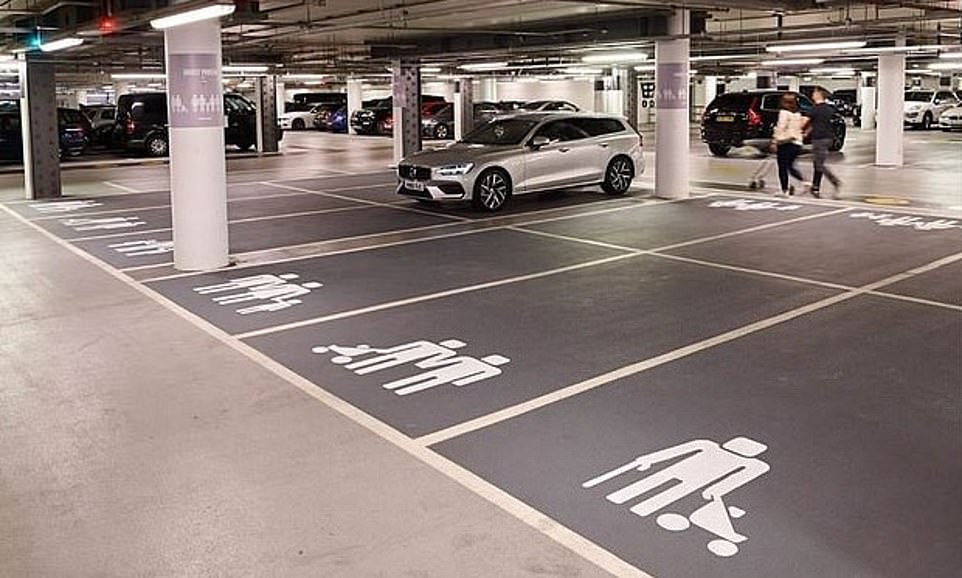 The 24 ‘modern families’ the spaces try to signify

4. Mum and dad with children and baby

6. Single mum with child and baby

9. Mum and dad with four children

13. Single mum with children and baby

14. Male and trans couple with child

15. Pregnant mum with children and baby

17. Mum and child and grandparents

19. Dad with son and his friends

20. Single dad and baby with grandparent

22. Dad and pregnant mum with baby and child

A spokesperson said feedback from Westfield customers so far showed the idea had ‘proven popular’ with them.

But shopper Rob Jones said they seemed ‘a bit forced, and pretty confusing’.

The 28-year-old said: ‘My family and I drove into Car Park A when they were put up and we didn’t have a clue which ones we could park in.

‘We had a queue of vehicles behind us as my wife and I tried to work out if we could leave the car in them.’

The spaces were the brainchild of Volvo, and advertising company Grey London, to mark the launch of their new family estate car.

‘According to the Office of National Statistics, 65% of UK families are non-traditional.

‘To launch Volvo’s ultimate family car, the new V60, we wanted to represent families of all kinds.

‘The Volvo Family Icons are a celebration of the broad spectrum of diverse families living in the UK today.’

The parking spaces were installed in Car Park A at Westfield, on Level 1 by lift lobby 2 near Waitrose and Marks & Spencer in August.

Volvo said that over the years ‘the definition of family has evolved, hence the icons profile different examples of family within society, including same-sex couples, single parents and nuclear families’.

It also saw the likes of Adidas, Flying Tiger Copenhagen, Curry’s PC World and Boots getting a refurbishment.

In October the West London shopping centre was crowned the best in the UK.

Westfield Shepherd’s Bush scored 4.09 out of five, with Westfield Stratford City coming in second place at 3.98 out of five.

The ‘ladies only’ bays were introduced in 2002 at the Bow Street car park in Bolton.

He also uploaded some images alongside his post, subsequently joking that a reversed car seen in one of them was ‘parked by her husband’.

His comments resulted in a fierce backlash with one person labelling the man ‘uneducated’ and another calling him ‘sexist’.