Renault Clio car passenger Sean Hayden, 24, aimed a blank-firing starting pistol at Neil Baldwin, who was overtaking him on the M42 in a Jeep

A car passenger who aimed an imitation gun at an overtaking driver on the motorway has been jailed for a year.

Sean Hayden, 24, aimed a blank-firing starting pistol at Neil Baldwin as Mr Baldwin was overtaking near junction 2 of the M42 near Redditch, Worcs., on May 19 last year.

Warwick Crown Court heard Mr Baldwin, who didn’t know it was not a real gun, called the police and followed the car Hayden was in until armed officers arrived to stop the car and arrest him.

Hayden, of Pound Green, Arley, Worcs., pleaded guilty to possessing an imitation firearm with intent to cause fear of violence.

He also admitted possessing a bladed article, namely a credit card knife, and was jailed for 12 months.

Judge Anthony Potter told him: ‘You went out with an imitation revolver. It’s a starting pistol, it’s not made of plastic, and it looks very real.

‘I am prepared to accept, although I do express some scepticism, that you went out to visit a gun shop legitimately in order to get blanks and that you may have needed to take it out in public in order to do so.

‘But having done that, what you should have done was place it securely out of sight. Only you know what was in your mind when you were in the passenger seat of your friend’s Clio. 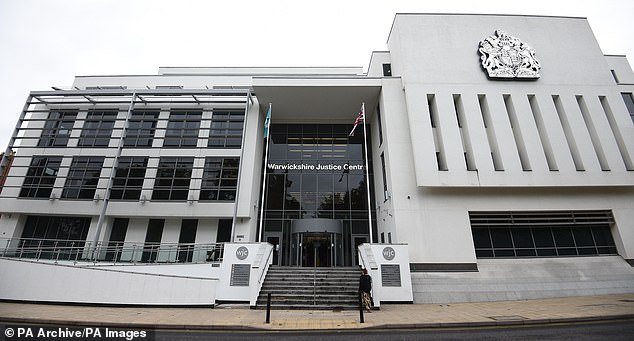 Hayden, of Pound Green, Arley, Worcs., pleaded guilty to possessing an imitation firearm with intent to cause fear of violence and possessing a bladed article. He was jailed for 12 months at Warwick Crown Court

‘It goes without saying that leaning across a driver in any circumstances on a motorway would be an act of folly and a dangerous act – but to take a gun and to point it at a car where there was a man and a child is an act of extraordinary stupidity.

‘I have considered very carefully whether I can suspend the sentence, and I regret to say, I cannot.

‘People who brandish imitation firearms from moving vehicles at another vehicle on a motorway must expect to go to prison.’

Prosecutor Alex Warren said at 5.45pm on May 19 last year, Neil Baldwin was driving his Jeep with his partner’s 12-year-old son in the back towards the M42 at junction 2 near Redditch.

Mr Warren said: ‘As Mr Baldwin joined the motorway, he was aware of a Renault Clio in front of him, and he moved out into lane 2 and overtook the Clio.

‘As he was doing that, he looked across towards it and saw that the driver’s window was open and what looked like a handgun was being pointed out of the window at him.

‘It was being held by the front seat passenger who had the gun in his left hand and was reaching across the driver to point it at him.’ 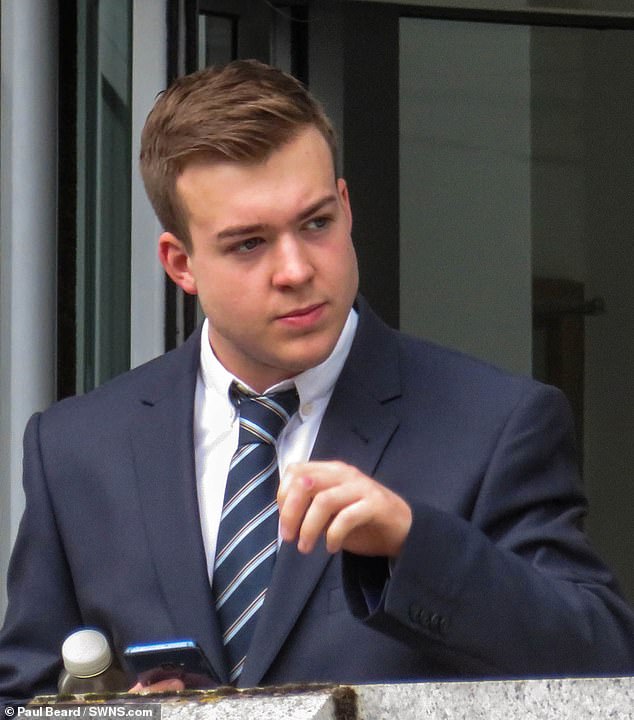 Julia Powell, defending, said it had been ‘a moment of madness’ by Hayden, who had not been in trouble before or since the incident, and he would lose his job if he was jailed

After checking with his partner’s son that he was not mistaken about the gun, Mr Baldwin called the police and allowed the Clio to overtake before following it until it was stopped.

Armed officers approached the car, and Hayden immediately told them about the starter pistol, which was recovered from the glove box and found to be loaded with blanks.

He was arrested and taken to a police station where he was searched and found to have a credit card knife in his wallet.

When he was questioned, Hayden said the starter pistol used to belong to his father, and that he used it to scare away sheep that came into his garden because he lived in a rural area.

He said he had fired it in the car to scare a young woman in the back, but denied pointing it at Mr Baldwin’s car.

The Clio driver later told the police that, at Hayden’s request, they had been to a gun shop in Kidderminster where Hayden had bought ammunition for a blank-firing revolver he had taken with him.

The driver said he had become aware of a Jeep quite close behind them, and had remarked that it was ‘up my a***’.

Hayden was messing around with the revolver in the car at the time, and he had reached across and pointed it at the Jeep as it passed them, the Clio driver confirmed.

Julia Powell, defending, said: ‘Mr Hayden is well aware of the seriousness of the offences he faces.

‘In his own letter to the court he confirms the effect it’s going to have on his life.

‘He had wanted to travel, but he’s not going to be able to travel to many countries because of a conviction for a firearms offence.’

Miss Powell said it had been ‘a moment of madness’ by Hayden, who had not been in trouble before or since the incident, and he would lose his job if he was jailed.