This is the horrifying moment a car smashes into a man and sends him somersaulting through the air before speeding off.

The victim had been crossing the road on Saturday evening when it appears he was deliberately mowed down by a black Audi in Bromford, Birmingham.

The distressing footage shows the man flipping full circle in mid-air as he is catapulted along the road on top of the vehicle for around 60 feet. 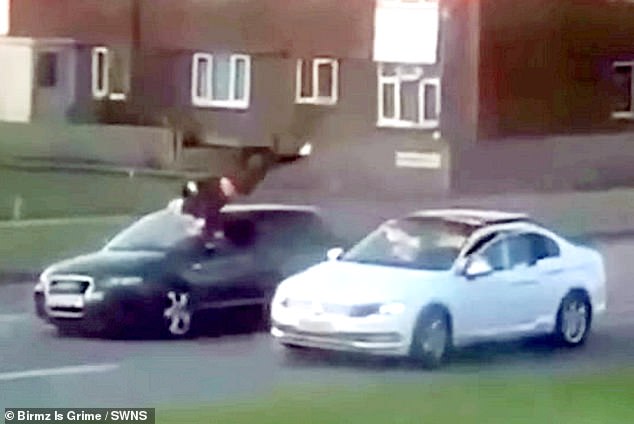 He then falls from the roof before thudding onto the road as the Audi and a white saloon car with a smashed windscreen drive away from the scene.

One onlooker, who did not want to be named, said: ‘I have no idea what it was all over but it seemed the people in these two cars were after this lad.

‘I’ve been asking about and I’m told he has been left in a bad way but he is likely to be okay, although its early to tell the extent of his injuries.

‘It was pretty brutal stuff. They were out to cause him some serious damage and they just drive off without a care in the world.’

The mobile phone footage, obtained by website Birmz Is Grime, shows the man dressed in black first trying to cross the road.

The white vehicle stops in front of him and blocks his path before he dashes out from the pavement where he is struck by the darker vehicle. 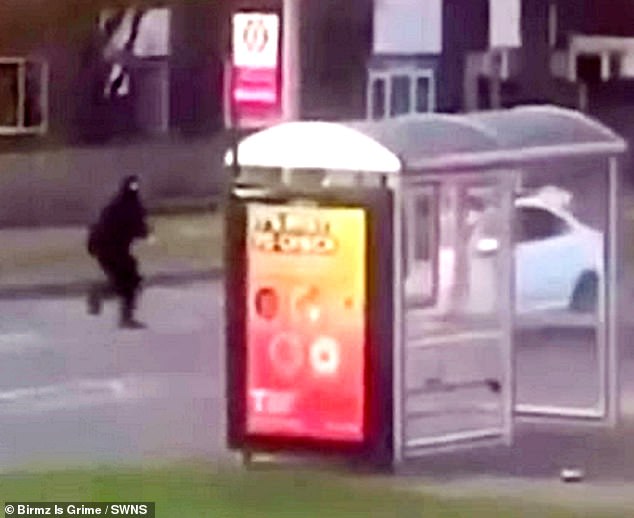 Prior to being struck by the vehicle, the man appeared to be running at the white car 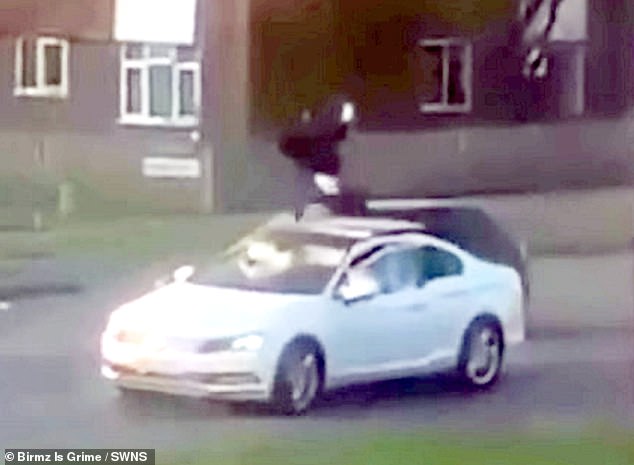 The black Audi ploughs straight into the pedestrian knocking him off his feet and flipping him onto the bonnet.

He slides over the windscreen and remains on top of the car for several seconds before tumbling onto the ground where he lies motionless in the gutter.

The nature of his injuries are not currently known.

Viewers on social media were shocked by the scenes.

James Paul Harrison wrote: ‘Hope he was ok after that and the footage was sent to the police. Life has become ten a penny to people.’

Demi Morris said: ‘This is so sad, the second one in two days. What is wrong with people?’

The incident comes after a 64-year-old man was killed in a hit-and-run just two miles away in the Stechford area of the city on Sunday.

A West Midlands Police spokesman said: ‘We are aware of a video being circulated on social media that appears to show someone being knocked over on Bromford Drive, Birmingham on Saturday.

‘To date, the person involved in the collision has not been identified. At this stage we do not believe the two incidents are linked.

‘Enquiries continue and anyone with information is asked to get in touch via live chat or by calling 101 quoting log 3431 17 April.’