Holidaymakers had a lucky escape from death after a car plunged 20ft over a cliff and landed on their beach tent.

A driver failed to take a corner and lost control of a black car, hurtling 20ft over a cliff on to Mawgan Porth beach, near Newquay in Cornwall, on August 6, much to horror of nearby sunbathers.

The car landed upside down on a tent on the busy beach, but luckily the holidaymakers had gone for a paddle in the sea, or they would have been killed.

A driver failed to navigate a corner and plunged 20ft over a cliff on to Mawgan Porth beach, near Newquay in Cornwall, on August 6 – much to the horror of nearby sunbathers 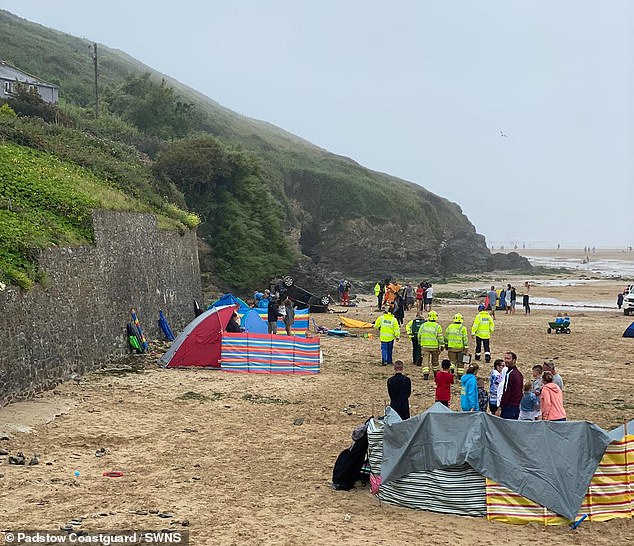 The car landed upside down on a beach tent, but luckily the holidaymakers had gone for a paddle in the sea, leaving the tent empty

The car continued to roll over, but miraculously did not squash or injure any other nearby beach-goers.

The shocked driver was helped from the wreckage and escaped with minor injuries, including cuts and bruises, the driver was taken to Treliske Hospital as a precaution.

Luckily, nobody else was injured in the incident.

Coastguard rescuers, police, firefighters and paramedics were all called to Mawgan Porth just before 3.30pm.

The driver was reported for driving without due care and attention, Devon and Cornwall Police said.

Newquay Police tweeted: ‘Just dealt with an incident where a driver had failed to negotiate the corner to Mawgan Porth.

‘Lucky driver with minor injuries and lucky that no one was seriously injured on the beach.

‘Car and driver had quite a drop, beach users shocked!’

Emergency crews righted the badly-damaged small black car, so it was back on its wheels, and removed it from the beach. 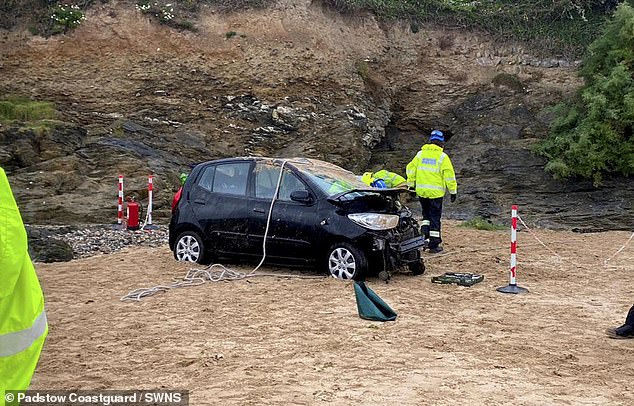 The driver escaped with minor injuries, including cuts and bruises, and nobody else was injured in the incident

‘We were informed that a car had been driven off a cliff and landed on the beach below.

‘We dispatched land ambulance crews and a critical care team to attend the incident. They treated one patient at the scene and transported them to hospital by land with minor injuries.’

The coastguard said there were ‘no safety, pollution or medical concerns and it was a very lucky outcome for the driver and beachgoers’.

Writing on Twitter, a coastguard spokesman added that the fall was slow enough not to activate the car’s airbags. 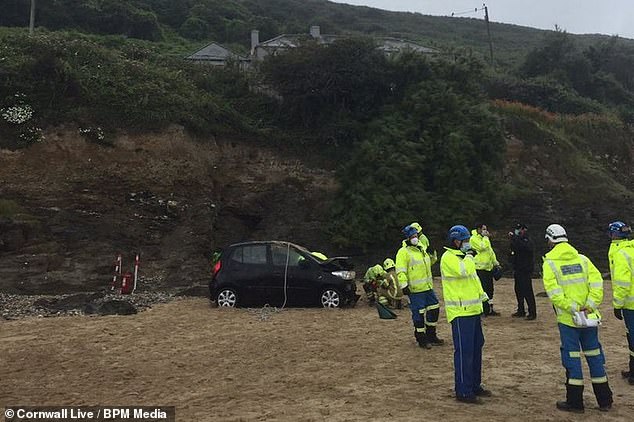 Coastguard rescuers, police, firefighters and paramedics were called to Mawgan Porth and emergency crews righted the badly damaged black car (above) and removed it from the beach

‘Initial reports of the vehicle driving off a cliff and landing on a beach tent were confirmed, however it had left the B3276 road, and dropped approximately 20ft, thankfully onto what was at the time, an empty beach tent.

‘With no other casualties other than minor injuries on the driver only, Padstow team were then stood down.

‘Two team members had already arrived on scene, and remained, assisting the remaining emergency services to right the car back on to its wheels, and remove it from the beach.

‘The cause of the vehicle to leave the road is not known, but it was slow enough not to activate the on board airbags.

‘With no medical, safety or pollution concerns, the emergency services removed various pieces of debris from the incident, and were able to depart the scene as requested.

‘Excellent multi service operations, and an extraordinarily lucky outcome for the driver and beachgoers.’